Well, this morning we’ve just had our first zero degrees (Centigrade) temperature of this autumn/winter season, so there will most likely be snow on many of the summits over 1500m ASL very soon. Time to change the wheels on the car to the ones with winter tyres fitted!

I have found an 8-pointer summit that should still be accessible in November (DL/AL-097 Fellhorn) even if there’s snow as the summit is less than a km from the top station of the cable car but the radio operation times will be controlled by the lifts, which stop running 4:45 pm local - that would be 1445 UTC at the moment but with the clock change here on October 31st, that should equate to 1545 UTC in November. The preferred operating time is 1300-1700 UTC from an earlier post, Allowing for packing up time and getting back to get the last lift down the mountain, my guess is that I plan to operate from 1300-1500 UTC. The summer season for this lift ends on November 7th after which it closes for annual maintenance until December 10th, so it is lucky that November 6th was chosen for the date!

wx permitting I’ll join the fun from DM/BW-110, my favourite location for the Trans-Atlantic S2S event. If condx keep up I’ll set up a VDA for 15 metres, which should provide a few dB extra gain (see photo, taken on HB0/LI-004). 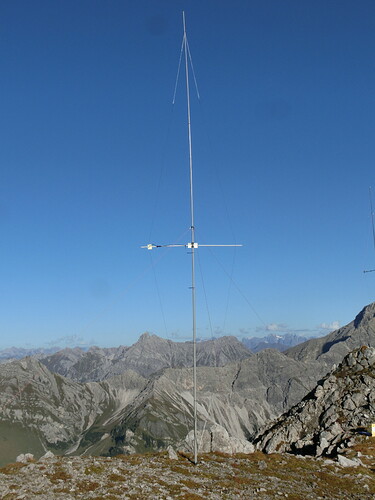 I plan to participate in this event for the first time from Rim Road Peak, AZ.
Hope will have many EU QSOs.
Attila W7AMR

Having my usual anxiety on which antenna to take to the summit for the NA-EUR S2S event… Looking at the VOCAP propagation website, it appears 17 and 20 meters will be my “go-to” bands. So… Wolf River Coils vertical? Linked dipole? Delta loop? Half Square? What’s everyone planning to use?

Me?? I plan on having 2 antennas there, EFHW and a trapped dipole. Planned power will be about 50-ish watts, unless I have a sherpa then 100 watts from my IC7000.

Yes, I realise, but I wanted to draw the groups attention to this important anniversary, so close to the S2S dates.

I started a thread about this earlier in the year but didn’t get much response.

I guess it just means folk who want to get involved should do their own thing. Nothing wrong with that.

A Couple of Anniversaries This Year Off Topic

12 December 2021 is the 120th anniversary of Marconi’s first transatlantic radio signal but the day before, 11th December, is the 100th anniversary of the first shortwave transatlantic signal. In some ways the latter is the more interesting as the Marconi signal was generated by sparks and represented a technology which was a dead-end. The shortwave signal, from what I can work out from the photographs, was generated with valves and thus used effectively, the same method we use today. There’s …

Hello John, thanks for that reminder, yes a very historical event for sure. Just thinking of what amateurs have achieved in those past 120 years is mind boggling.

Domestic situation permitting, I’ld like to participate for about three hours (probably 1400 – 1700 UTC) from my nearest summit, Arnside Knott G/LD-058, and the one I’m confident about descending in the dark. Will take a small tent as the weather on northern English hills in November is usually inclement [mental note: Should I practise taking the tent down at home with the lights off?].

Buy one of these. On eco-mode it lasts for ever and is more than bright enough for walking on known paths etc. or use full power for less well known routes. 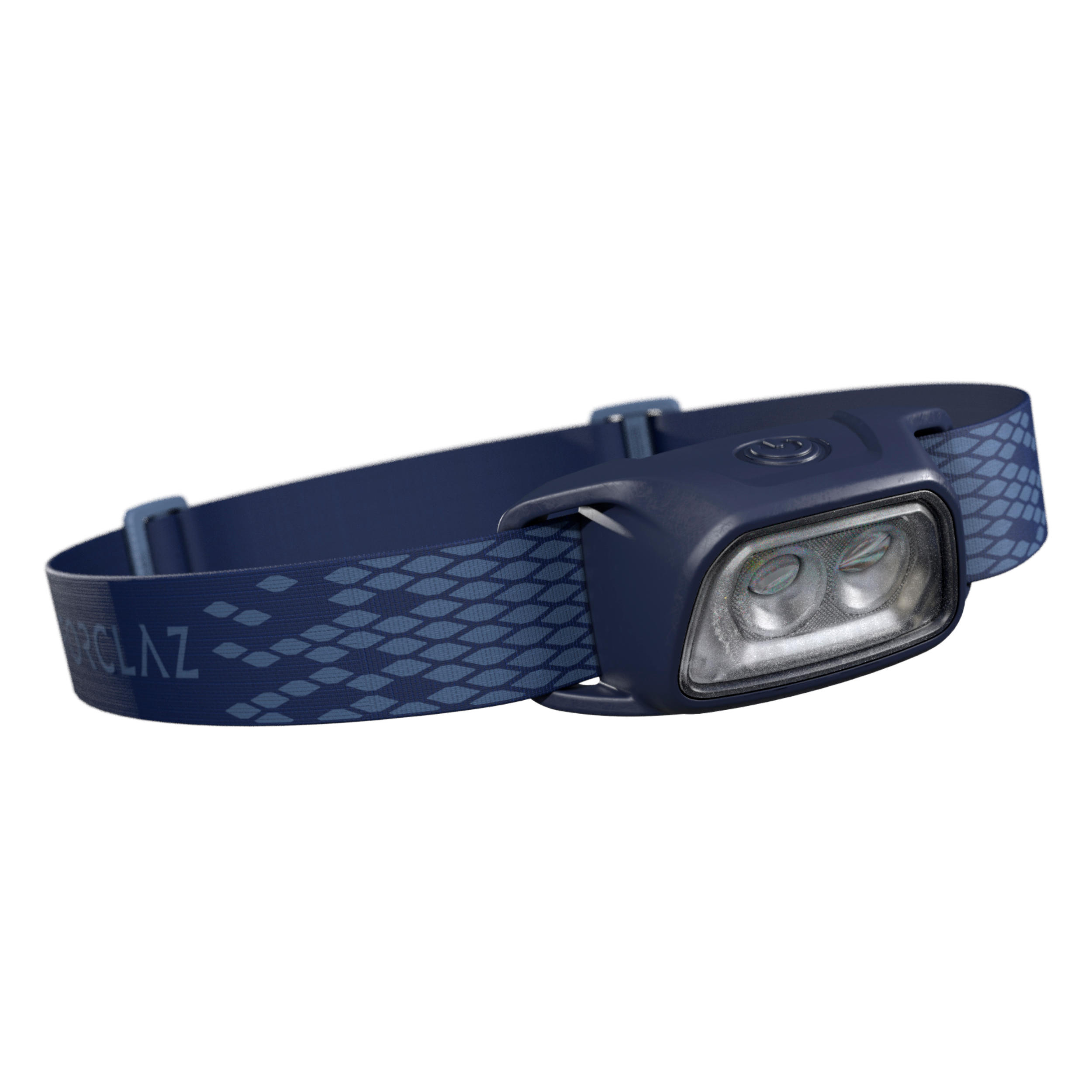 Buy one of these

I’m down to my last headtorch (there’s a conspiracy at my house to thwart me by losing them). As I’m too lazy, er, busy to research brands/models I’ve taken your recommendation Andy and ordered the Forclaz one. Of course, I’ll be blaming you if it turns out to be rubbish.

I won’t know till the last minute if I will be around on that day, as soon as I know I will post a Alert.

I don’t think that I have missed one these before and always look forward to these events, but unfortunately I will be involved in other recreational activities that weekend! I may be able to break out the radio during a lunch break so who knows? I hope the condx are excellent and everyone works a ton of S2Ss!

everyone works a ton of S2Ss!

That is exactly what I intend to do.

After I recently bought a small PA MX-P50M for just such events…
That of course needed a new balun with thicker wire. The Endfed runs great on 40, 20, 15 and 10… all other bands then only get 10 watts from the KX2’s tuner.

I’m looking forward to pointing the Endfed as Inv L towards the west.

While ostensibly exercising the dog on Arnside Knott G/DD-058 this afternoon, I took my vertical and antenna analyzer with me and surveyed the few open places near the summit not hemmed in by trees for possible sites for my NA SOTA Day activation.

Like so many G/LD summits only a few inches of soil have accumulated over the 320-million-year-old limestone [ditto my garden!] and despite much probing the ground with my Cha MPAS Lite ground spike I could find nowhere deep enough. Where are the anthills when you need them? [Fortunately, some neighbouring summits have them]

I might have to give up on using the vertical and instead modify my 20/10/6 linked dipole to a 20/17/15 one. Even then I’ll still need a few inches of soil for the pole guy pegs. Loose rocks sometimes come to rescue here. And if on the day, it’s cold / wet / windy outside the tent, forget changing the links and just press the KX2 ATU button when switching bands.

I don’t have a ground spike. I look for a suitable tree and simply push the wire with the telescopic mast vertically upwards and lean the mast into a branch fork that has a little distance to the trunk.
I just had a look at the summit. There are quite a few places where you can put the mast and where you are open to the north-west… for a vertical or a sloper
… I have already made a few DX this way.

Arnside Knott is an awesome summit for working NA, the take off is really good.

I’ve chosen Ingleborough as the summit I’ll use, you can see the sea from up there although it’s probably >10 miles in land (pure guess). I know Ingleborough very well and it’s only about 15 mins drive from home to the start of the walk.

I have a Petzl Actik with Core battery and it’s been a really good purchase. 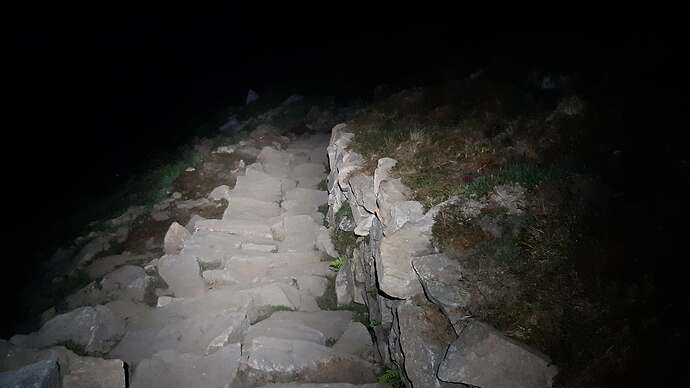 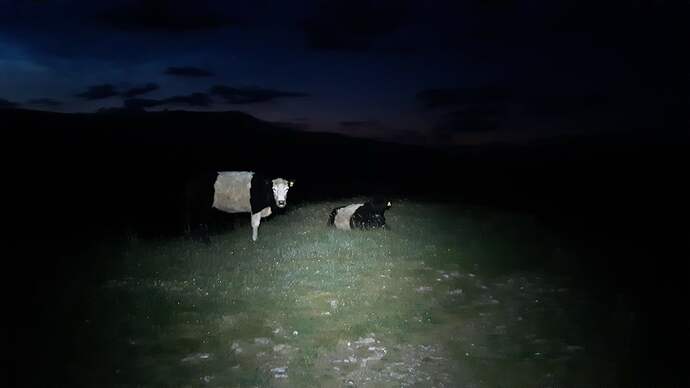 For mast support when the ground is that hard Andy, I use a surveyors tripod. It’s fine as long as it’s not a multiple km walk in to the summit.

Fence posts - if there are any around, are your friend. Just bungy-cord the bottom couple of sections of the mast to them. I have some “Bongo Ties” that are great for this purpose.
73 Ed.

Not as many as you might think. G/LD-058 (which is 10 minutes drive from my house) is a very popular and easy walking destination and there’s an extensive network of paths (much walked by me and my dogs) in those open areas and most of the smaller paths are invisible viewed via Google Earth.

I never want my antenna wires to cross above paths (it clearly bothers some walkers). The surrounding trees not so far away are much taller than any mast I use and I don’t want to share my 10W with them. A few trees are in the right spot to act as antenna supports but most not.

Another restriction for the TA S2S event is finding a site that’s flat enough for my small tent (nature has determined that most flat areas up there are covered by trees or paths).

I have operated many times at a few locations on that summit with a vertical, EFHW and inverted V linked dipole with very good results but antenna set up and taking down is harder work than at most of the higher summits in the area.

Apart from the trees a lot of the ground is covered in brambles and other plants that love grabbing antenna wire lowered onto them. Hence my original plan to deny them that opportunity by using a vertical. However, making the 20/17/15 linked dipole will be a useful asset and more manageable in the dark than my 60/40/30/20 one.

… Arnside Knott G/LD-058, and the one I’m confident about descending in the dark.

Don’t do what I did and leave you car door wide open. The good people of Lancashire hadn’t touched anything while Paul and I were activating the summit.

… despite much probing the ground with my Cha MPAS Lite ground spike I could find nowhere deep enough.

I don’t recall having any issues with guying. I first operated from the summit in 1975 with Richard G4CZP when we used an aluminium mast to support a 2m yagi. Maybe the soil is being washed away.

Arnside and its Knott are a couple of miles north of the Lancashire-Cumbria border (in the historic county of Westmorland). So, good job no Lancastrians had strayed across the border and seen your car.

I don’t recall having any issues with guying

Yes, me neither with guying a mast, but as per my post you quoted I was talking about the ground spike of my vertical. About half of the 34-cm long spike should go into the ground especially when windy - the [heavy duty] telescopic whip section is 17ft long.