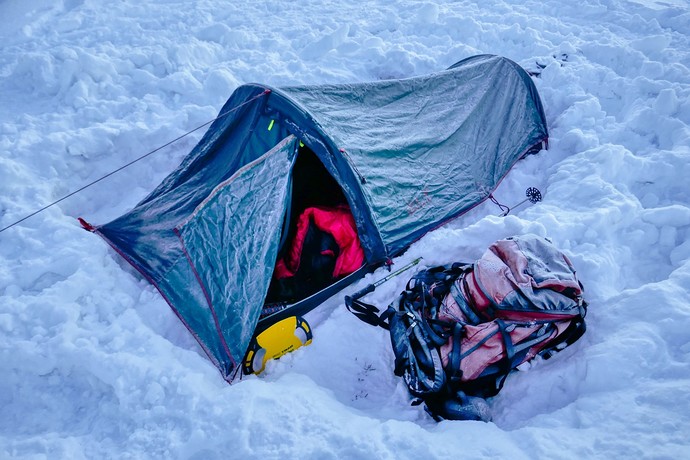 The night went well and was pretty much windless; despite cold feet, I slept well until about 4am after which kept daydreaming. 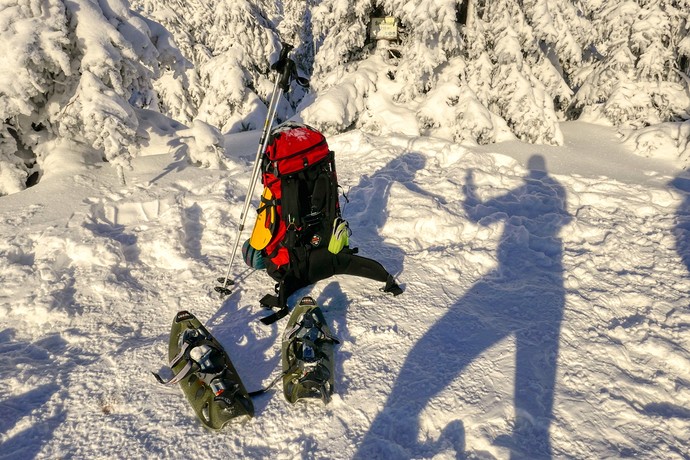 It took a while for the sun to reach out behind Śnieżnik. When I saw the first sunrays, I came out of the tent and put on with some difficulty my hard, frozen shoes… not a pleasant experience but I do not like to put my shoes in my sleeping bag as they are snowy and wet. I had some breakfast, packed my things and got ready to get on the move again. I had a significantly longer day ahead of me today, with about 19km planned (12km the day before). 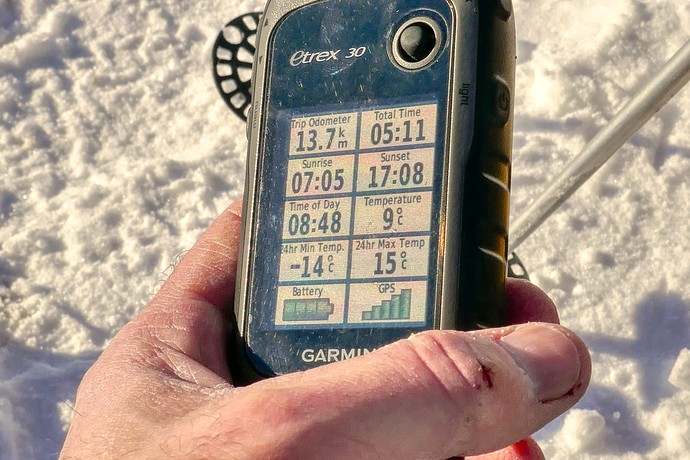 Before setting off, I turned on my GPS unit - the lowest temperature during the night was -14… 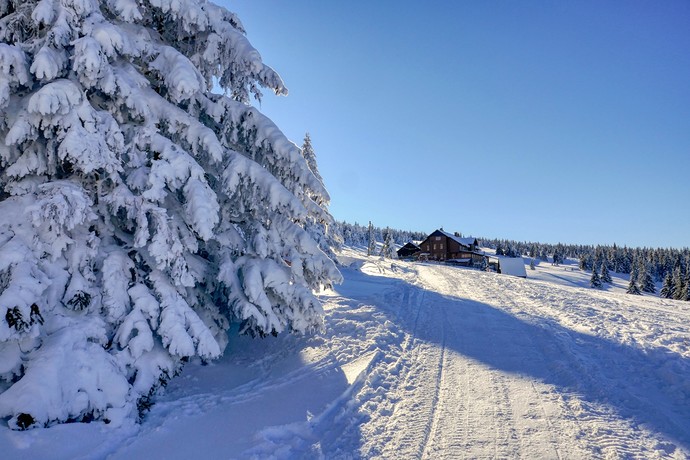 I passed the Śnieżnik mountain hut, which had just recently reopened due to relaxed Covid-19 restrictions in Poland. 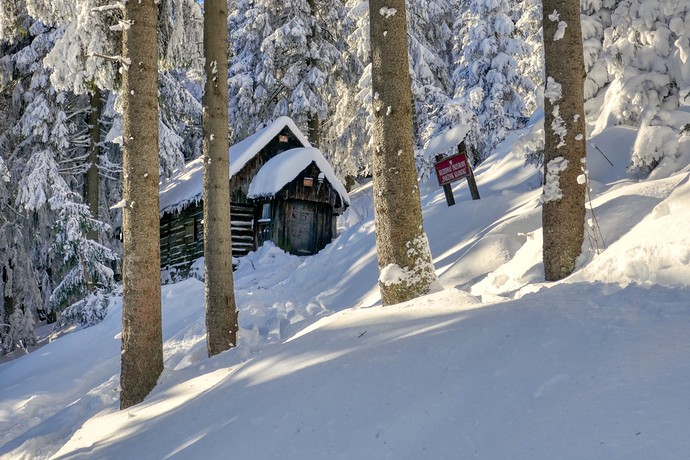 The plan for today to reach Śnieżnik was to hike around the mountain and reach the other side, from which I would then climb up. On the way, I stopped by a non-guarded hut. It used to be a hunting lodge and is certainly not far from a century old… I slept there a few times before but the danger is you never know which company you’re going to get for the night, and I didn’t have only good experiences in such situations! 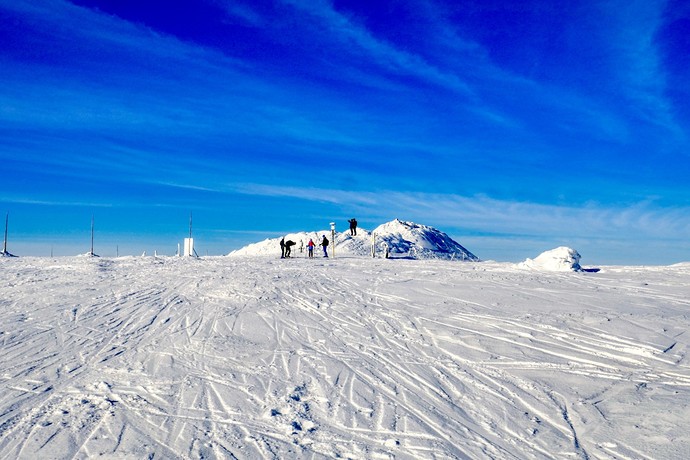 The climb up to the summit was steep and tiring; once at the top, I celebrated my victory with a cup of tea and a piece of chocolate! 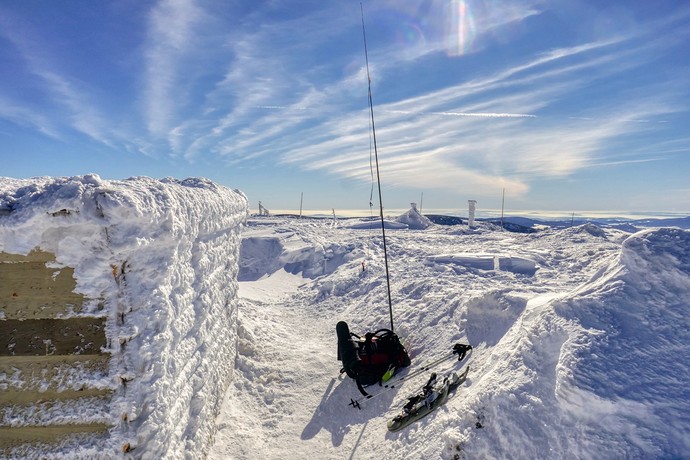 I setup my equipment and made only 5 contacts over FM, despite spotting and trying different local frequencies… an activation on a week day is certainly more challenging that at the week-end. 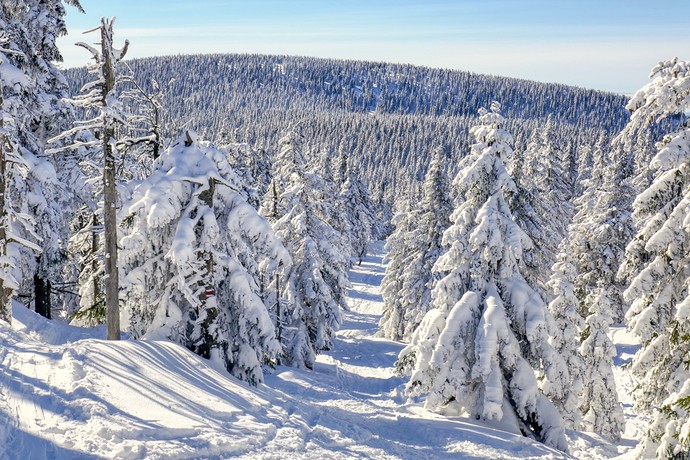 Instead of coming down the valley directly to the town where I had parked, the plan was to go to Mały Śnieżnik (Small Śnieżnik) visible in the background, and then take another path down to the valley. It was a very pleasant walk, mostly flat until the last 500 meters. Mały Snieżnik used to be a SOTA summit (which I previously activated), but being in the Czech association, it was removed from the database last year as it didn’t meet the P150 rule. 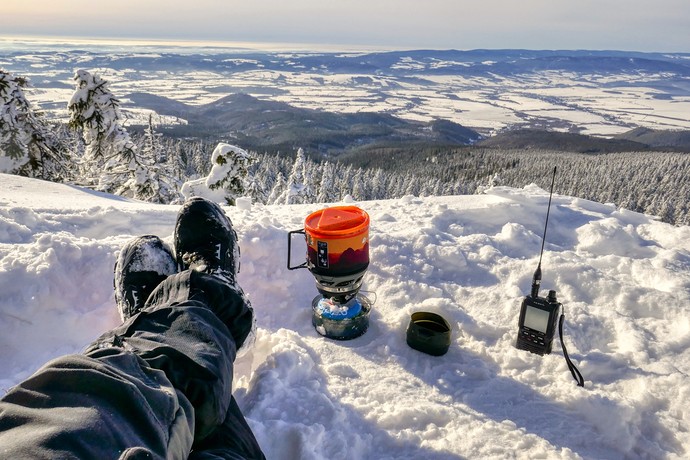 I noticed on the map another group of rocks with a viewpoint. I decided to look for and have lunch. This proved again a great idea. The view was stunning, the sun was shining and there was no wind whatsoever: the silence was total. It was one of those moments suspended in time. I listened to the local repeater while enjoying a bowl of pasta and a coffee. I relaxed there for almost an hour! 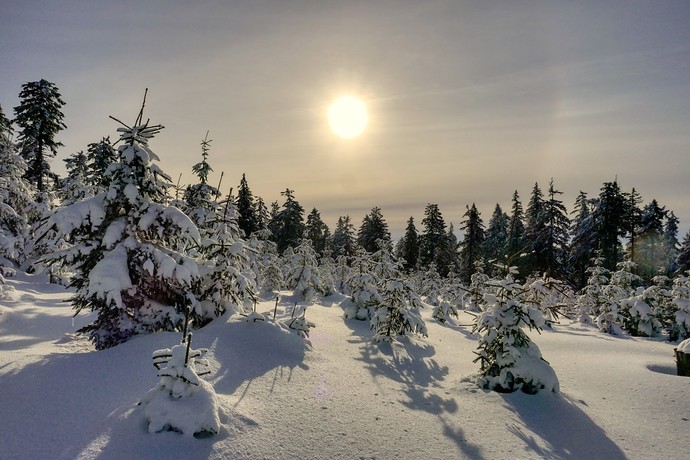 I reluctantly set off on the road again, and after another 3h uneventful walk down the valley, I was back at the parking again, short after sunset…

Thanks for sharing that frosty night with us. -15°C is something

. Would you share which mat and sleeping bag you have used?
Great pictures too. With the ice covered tent one can almost feel the frost bite.
I guess you took the radio batteries in the sleeping bag?

Btw planning an overnighter this weekend. But temperatures are a lot milder with warm southerly winds forecast.

Made me smile about leaving your boots outside. I remember the 1st time I slept in -16c. I left my damp/wet (pre-gortex) leather boots outside. It took ages to get them to thaw out before I could put them on. I think I kept them in the tent after that!!

beautiful pictures and a nicely told story. Thanks a lot. Your break in a white and silence landscape with a wide view over the lower land and with a hot meal and coffee must be great.
I wish you more moments like this.

I want to do that sometime. Nice view from the top! Too bad in my nearby area (Pennsylvania Wilds), it’s all covered in trees, or right by the road. The photos are beautiful!

Would you share which mat and sleeping bag you have used?

I used a Cumulus (Polish brand - see https://cumulus.equipment) down sleeping bag - TENEQA 850. Its confort rating is -15° so just right!

The sleeping pad is a Therm-A-Rest NeoAir Xlite (old version).

I guess you took the radio batteries in the sleeping bag?

Yes, I dumped all electronics (phone, radio, camera, power bank) in the sleeping bag for the night, as well as some water. And I think that’s what caused my feet to stay somehow cold throughout the night. All this equipment is acting like a cooling element in the bag! Next time I will warm up some water and it will act as a proper hot water bottle in my bag

I always kept my socks on when I got in my sleeping bag in winter. It served two purposes:-