As you have already noticed, there is a quite active group that has been founded under SOTA BW. It was triggered by the initiative of Marcel @DM3FAM and Roman @DL3TU, who are also the Region Managers of Baden-Württemberg.

The fact that there is a 20th anniversary of SOTA made it necessary to celebrate it in some way. I phoned Marcel and asked him what he thought of the idea of a birthday callsign. He was enthusiastic and gave me the go-ahead to make an effort.

I contacted the authorities and in the fourth attempt I succeeded and received the permission today! 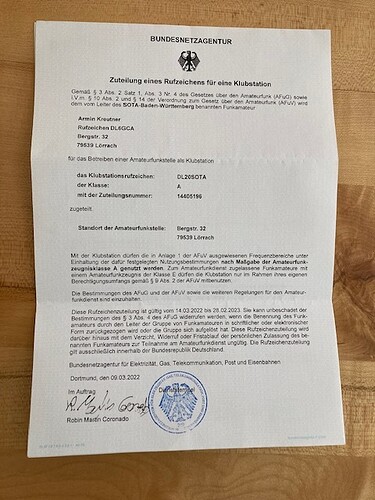 From 14.3.2022 until 28.2.2023 the callsign DL20SOTA/P will be heard from various summits.
It is registered as a temporary callsign of a club station and will be activated by the members of SOTA BW after consultation.

quite good idea. Hope to work the acivators during their activity. Many greetings from NRW,
the flat area :-).

Good luck for the activities and best 73’s

what a great idea! I’m already looking forward to going on air with DL20SOTA

Thanks for your work!

WELL DONE Armin, and BW team!!
I see the callsign’s licence is valid until the end of February next year. Perhaps as Friedrichshafen is in BW there can be some special use of DL20SOTA in connection with all the SOTA visitors to Ham Radio FN (24-26 June)?

Thanks again from me for your efforts. Nice that it worked out. We are looking forward to many QSOs with and from DL20SOTA

If you look at the membership list of SOTA BW, you will see that it has long since outgrown Baden-Württemberg.

Great ! I will be part of it

Well done Armin. I’ll keep an eye on the alerts
Must be just about enough propagation to work from here.

Dear Armin,
tnx for the very first qso and s2s with DL20SOTA.

Here are the first 20min of your pileup on 40m ssb. 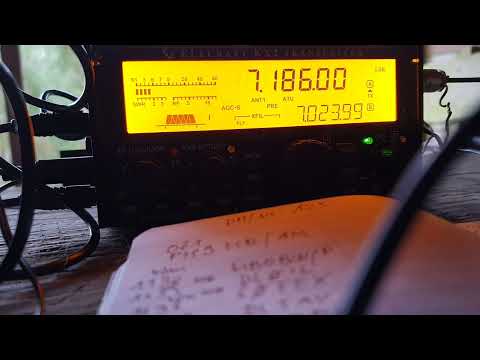 Interesting to hear yourself in action …

The first activation was great!

… on a Monday afternoon!

The first activation was great!

The second activation with DL20SOTA/P was also great. Many thanks to all chasers for calling in

I am always amazed how many loyal chasers are QRV even during the week and we get to work them. And of course for the s2s QSOs! Alain @F5ODQ, I also thought of Guru @EA2IF in between, especially when I heard you - I saw your alerts in the meantime. Thanks for this special s2s QSO.

CW I could not do much because it was very cold and windy. Therefore I concentrated on SSB. Special thanks to Stavros @SV2RUJ who worked me in all bands and modes I was QRV in

Thanks Marcel I finally got through to you after trying all day.
It shows what rewards there can be with patience lol
Best 73 Allen

Good Job Armin! Got the station in the log once already. Listening for more contacts. // John Paul // AB4PP

Thanks for the challenge Armin!
10 pointer on the first QSO!

Thanks for your patience and glad it worked out

Was very happy to hear you! See you again soon.