Already checked out your score for the HB15SOTA diploma? [Part 3]

Continued here from part 2, so enjoy the probably last news and stories, since the HB15 period ends after May 8, 2021.

enjoy the probably last news and stories, since the HB15 period ends after May 8, 2021.

Thanks a lot for your message about Juerg plans of HB/SH.
I fully understand your words about SOTA and service because I am mainly activator, not chaser.
I agree with you.
My post was an information not an order

Thanks again and hope to meet you soon on frequencies

Thanks, also for your smiley, understood well, hi. Thanks also for calling in today on Bürgenstock.

Please take note that HB/SH is planned for Tuesday afternoon as far as I know.

I’ll have a regular week at work.

Canton Jura (HB/JU) is scheduled for this Monday afternoon, additionally to the already alerted GL, AI and BL. Especially good success to HB9EAJ on HB/GL!

So listen for the HB15 fellows and enjoy!

Many thanks for giving me a chance to participate in HB15SOTA diploma event.
All cantons are chased right now.

Tomorrow another try to chase Juerg on HB/SH-002 - for pleasure, not for points.

Thanks Markus, it was a success!

The hike up took longer than expected, because I had once trouble to find the way, and had to return to a junction. There was old and new snow from the night before that made it sometimes difficult to find the correct way, because there were no traces from other hikers. But finally, I managed to find the way and most important, the summit.
It was definitely good that I carried my snow-shoes with me (that I already put away, because for a city boy like me, the winter was already over). There were places where the snow was pretty deep and I got trapped with my hiking boots. Putting the snow-shows on and off also didn’t make the hike faster.

After about 500 vertical meters, I reached the ridge… 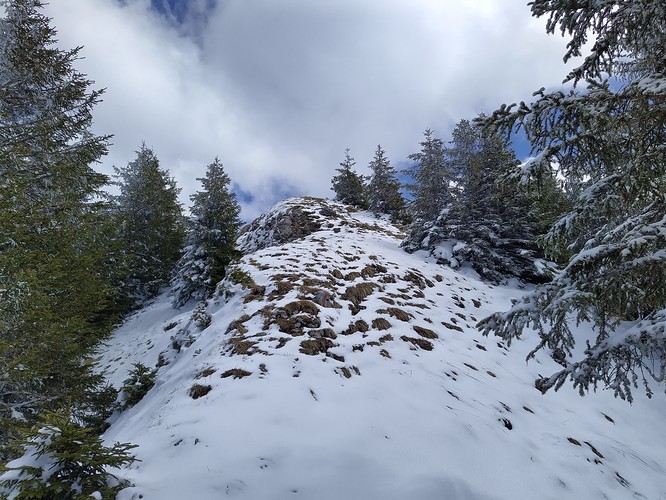 …and it was a matter of some minutes to follow it… 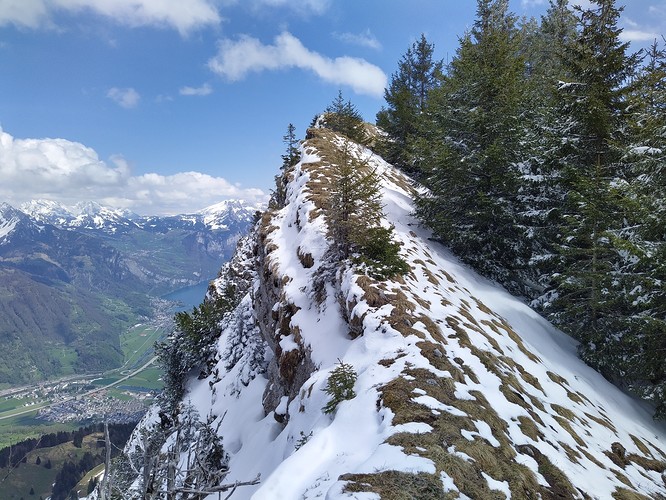 …and setting up the antenna… 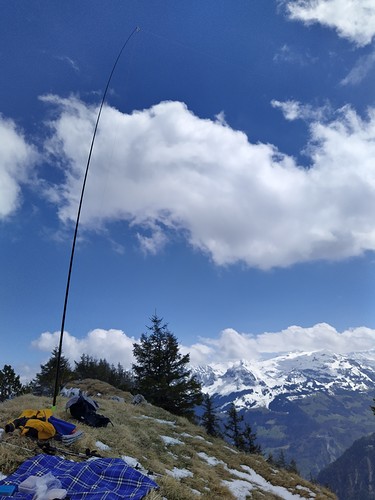 …and activating the summit.

The weather was perfect and pretty warm with nearly no wind.
Paul @DL6FBK was happy that he could work canton Glarus and I enjoyed apart of the 49 QSOs with 8 S2S the view from this summit. 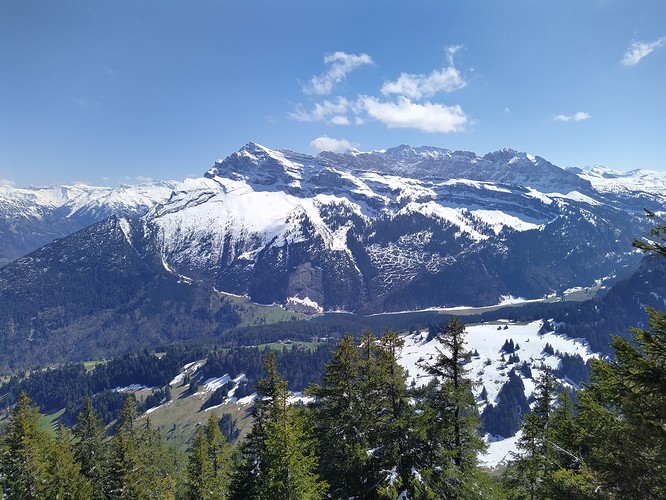 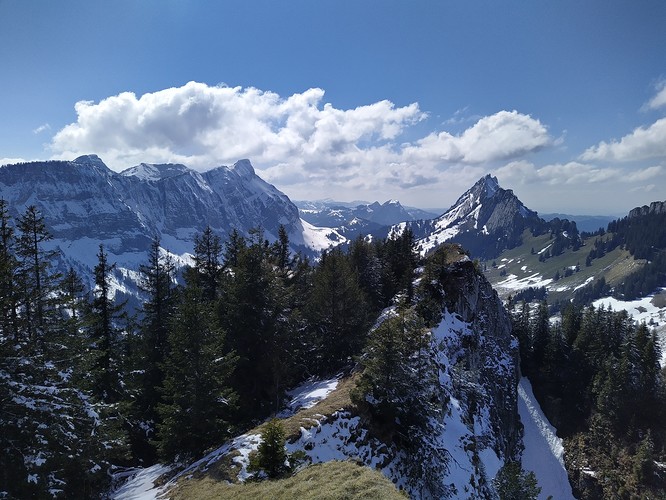 Next to the snow I saw several typical mountain flowers, trying to attract the first insects.
The following ones reminded me about my own HB15SOTA status: 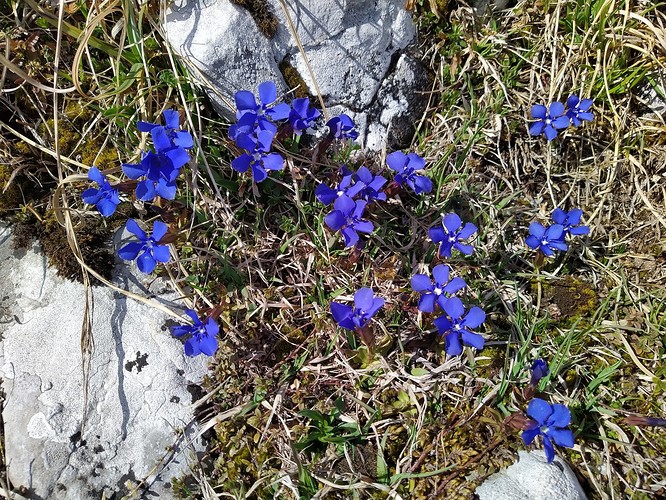 On the way back home, I made a short detour and visited the Obersee (the upper lake, what for an original name) and it reminded me about Lake Louise in Canada, albeit not as dramatic as the original one: 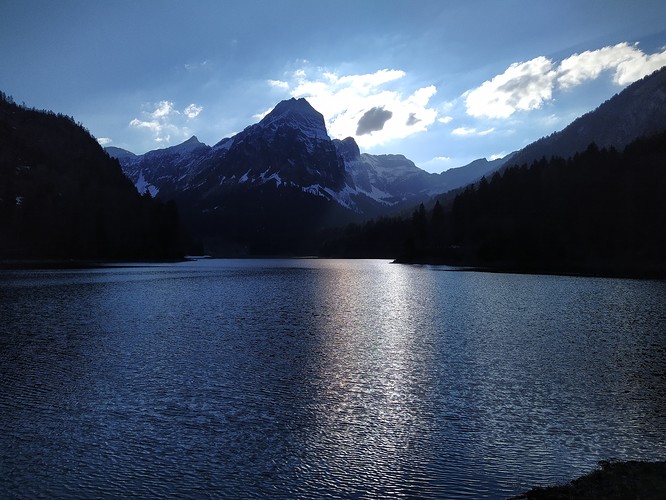 Thanks for all the contacts and 73, Stephan

Happy to see that you and others have been made happy by your small adventure. Thanks for mastering one of the HB/GL summits for the gang ~ well done!

My own summit of today was in the office - would have preferred one from outside!

Thanks, Stephan, for your report and the magnificent photos!
I bet you had a great day out there with nice weather and incredible views, handing out GL to the deserving?
vy 73, Roman

Thanks to you and to Jürg HB9BIN for the activations last three Cantons which I needed!

But the game is not over, next target is reaching “Edelweiss Lowland-Summit Diplom”

You’ve been welcome – each of you has had his own access to these cantons. They are important for us Swiss, since we have so many of them. In the end, they offer the surface where the summits have been set up from where you have heard us calling you all throughout the HB15 year.

Lowland? Why not. I’m happy myself for this new challenge. Switzerland is not only Matterhorn, Rigi, Jungfrau and Mt. Pilatus and a pile of cheese, and the Swiss don’t live all above 2,000 m. The lowlands are our workaday face just round the next corner. Some are simple, but many are gems and worth being discovered. The Lowland Award offers a way to access them and share an idea of their simple beauty. For us HB9ers they offer a systematic way to go out and see places we’d never think of without SOTA.

Let yourself be assisted by HamAlert. There isn’t an automatic built-in service like for the SOTA Completes, but copy the remaining summits from your query result on the award page into a summit filter and renew it from time to time. 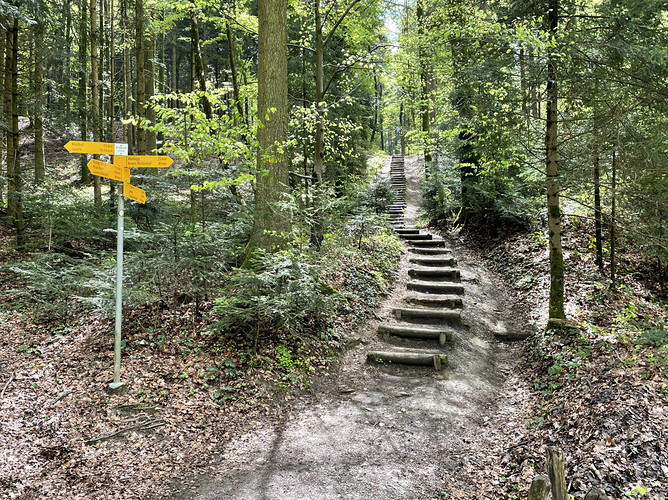 Hello Stephan,
Thank you for the nice report and the pictures of your activity.
Special thanks for the opportunity to work on the missing canton. I am now also happy to receive the “Edelweiss” diploma. On this occasion: We would like to thank all the activators from HB15Sota who made this great anniversary year possible.
In this a big thank you and best 73 ’
Paul DL6FBK

Hi,
I still hope for my last three missing cantons - FR, GL und JU.
…must say - chasing is addictive!
Big thanks for all the activators. Greetings from flat northern Germany!
Greg DL3GJ

Thank you Paul and all the other chasers. Without you it would be only half the fun!

And of course thanks to the ones who came up with the HB15SOTA idea, the ones dedicating their time and providing the infrastructure. Not only for this special event, but in general, which makes SOTA so special.

Tomorrow another try to chase Juerg on HB/SH-002 - for pleasure, not for points.

Thanks again to everybody who was/is involved into this diploma program !

Hi all,
Today was my last chance to get my last missing Kanton SH.
Very unfortunately I heard not the slightest and weakest signal from Jürg. So that is end of the story, with 23 Kantons, have HB15SOTA may be 60 times in my log.
Naturally I am disappointed, new challenges await me going for the Lowland Edelweiss.
I wish to thank all activators for their tremendous efforts to serve all chasers in the best possible way.
I hope many many chasers got lucky with the result they aimed for.
It was an ultra challenge for me with 5W and a 3m (9ft) long whip antenna.
See you on the bands.
73 Patrick ON4BCA

congratulations Patrick, I have 3 more to go.73 de Don

There have even been stations that have invented the contact always above your possible answer. A pity was another ON … I think he’ll be surprised of he don’t see his call in the log !

Congrat’s for your QRP results !

you have 4 days to make HB/SH

Hi Donald,
Thank you very much, I hope you get the last 3 missing.
23, just one short it hurts, but I did my very best. Have already the HB9SOTA Edelweiss, approaching now the Lowland Enzian.

Thank you Eric for the message.
I very very very well know that Jürg and Bruno have done superhuman efforts to make the HB15SOTA Edelweiss possible for me. I will never forget that, he is a true friend.
QRM or not It was impossible to hear him even not the weakest morse modulated noise.I went down to 50 Hz Filter, 100 Hz, Audio peak filter, to no avail.
a 3m long whip antenna is no Arecibo ear.