Activation of HB/VS-006 Matterhorn on September 9

On Tuesday, I was able to successfully activate the Matterhorn, HB/VS-006 and complete a total of eight QSOs.

Below, please find a few images from the activation.

Route
We took the Hörnli Ridge, the ‘easiest’ of the several ascents to the summit. Good descriptions are e.g. available from

The pure climbing difficulty is often rated as UIAA III to III+, but the real challenge is not in the technical climbing per se, but the fact that

The Matterhorn has actually two summits, the a few meters lower “Italian” summit with a summit cross, and the main Swiss summit. Both are divided by a ridge with a dip / saddle in between. I think that the Italian summit is still in the activation zone, but did not check that.

After a short break on the main Swiss summit, we traversed a few meters back to somewhat protected small place, where I started my activation.

Activation
As it was clear that the available time on the summit would be very short, I designed a special vertical SOTA antenna for this activation. I will post more details later; in short, it is an up-and-outer (vertical with 1-2 radials) attached to a 5m carbon-fiber mast and designed to be used with an Elecraft T1 auto-tuner.

I had trained and optimized the fast deployment on the Breithorn plateau and the Oberrothorn HB/VS-125 the days before (e.g. attaching a small potato to the end of the radial for easy yet decomposable way of deploying it).

By 6:48Z I had bagged eight QSOs, packed up, and the long and challenging descent began.

Descent
As expected, the descent was as challenging as the ascent, and by the time you already have a 3 - 5 climb in thin air in your bones. We started the descent by 6:55Z (8:55 local time) and arrived back at the Hörnlihut roughly 3 hours and 20 minutes later.

A big thanks goes to 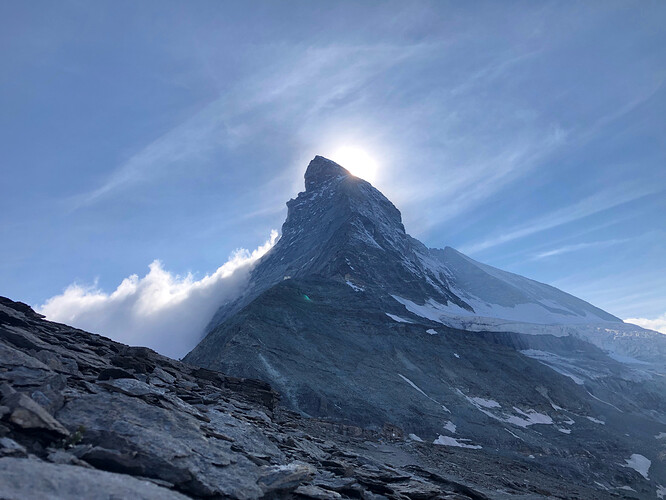 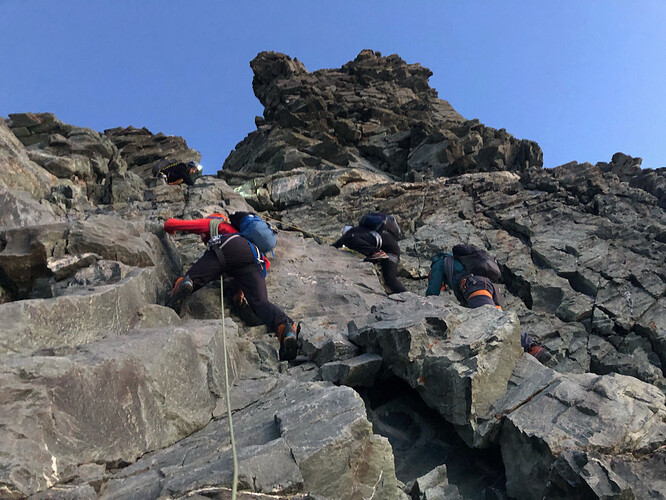 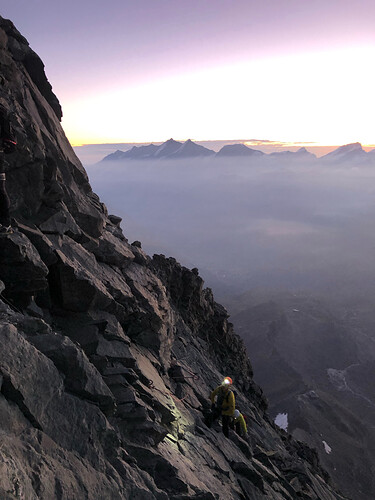 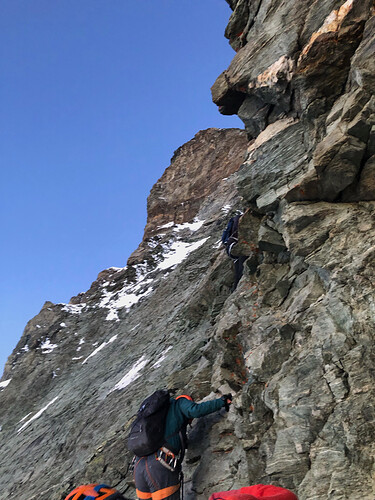 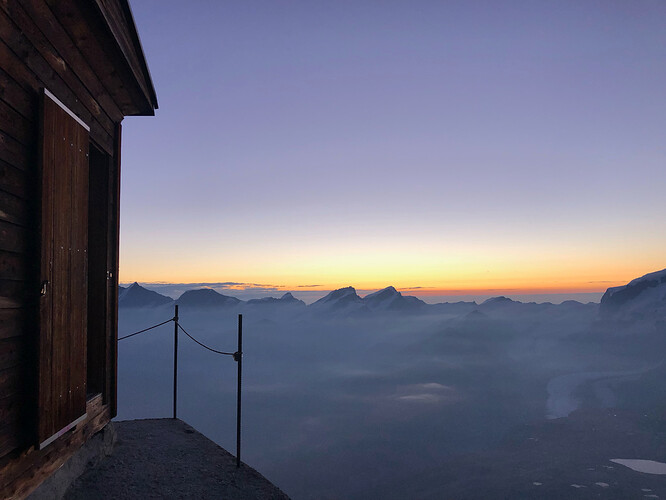 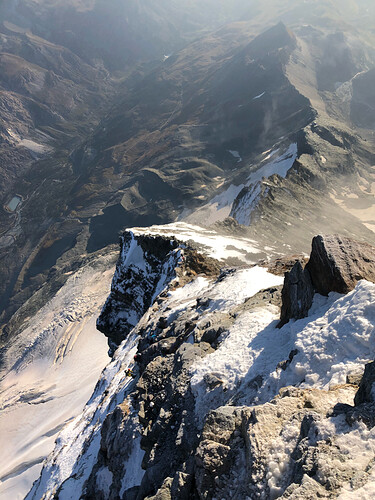 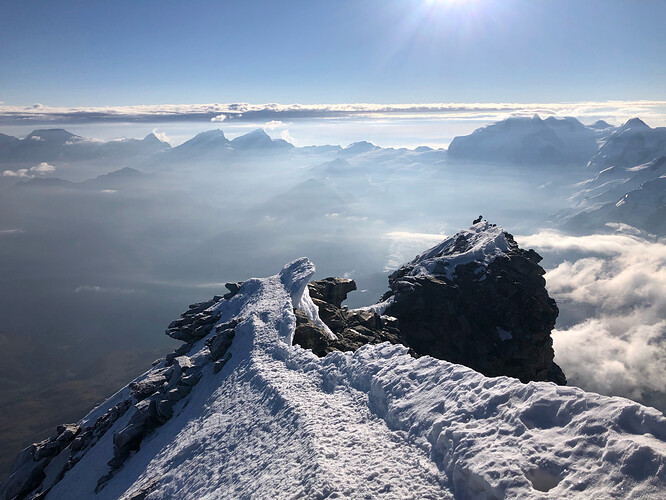 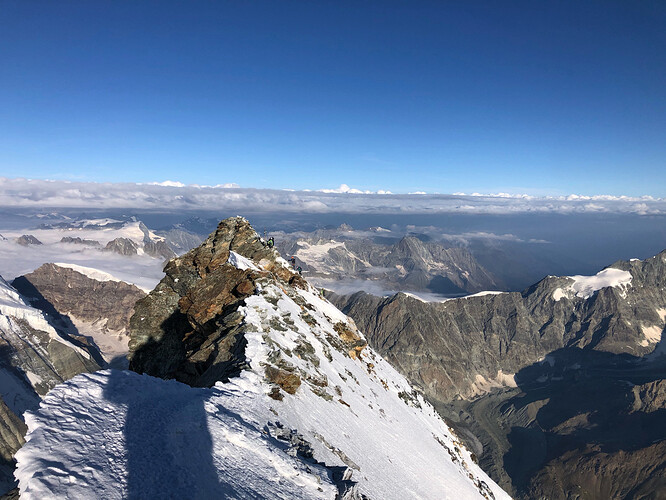 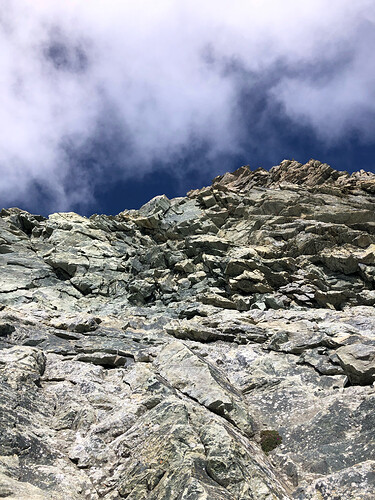 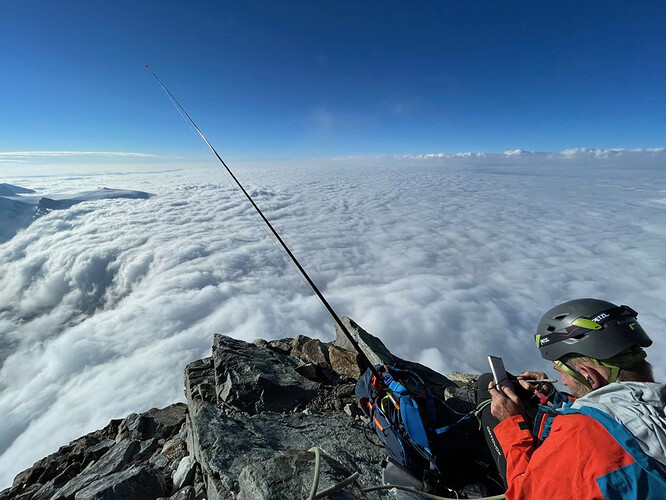 Here is a first picture of my “fast activation antenna system” approach. The basic idea is

I still have to investigate whether the main factor of influence are the ground losses (could be that the large area of snow on the glacier was in fact a very effective ground) or the relatively flat angle of radiation and the directionality of the antenna determined by the position of the radials (which is often given by the topology of the summit). 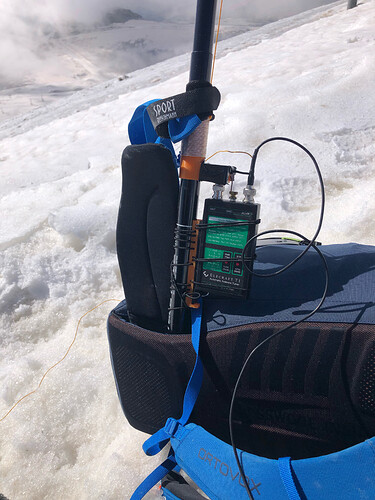 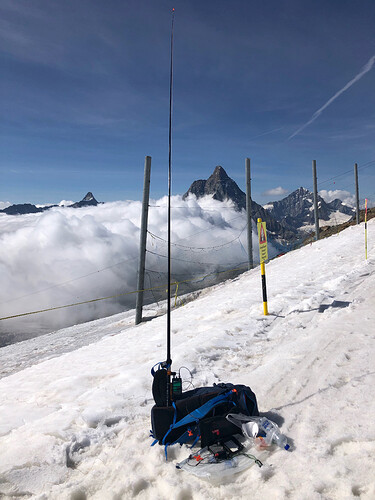 Congratulations, Martin! You are now the first and so far only OM who has managed to activate Matterhorn and obtain points for it

Nice job – we all know it’s one thing reaching a summit like this one in the first place (and getting back safely), and another having the time and conditions to do an activation, especially on HF.

Alas, I couldn’t hear anything from you on 40m at home, so I’ll keep waiting for my chance to complete…

Congratulations to Jürg @HB9BAB, who has now managed to do a Matterhorn S2S from his beloved Altberg HB/ZH-015 for the second time!

I still have to investigate whether the main factor of influence are the ground losses (could be that the large area of snow on the glacier was in fact a very effective ground) or the relatively flat angle of radiation and the directionality of the antenna determined by the position of the radials (which is often given by the topology of the summit).

Well done Martin, congratulations on the simple and functional antenna.

With regard to the different SNR values at different locations and different times of the day, I would really not let myself be unsettled: The reception conditions at the location of the skimmers change not only with the time of day, but also with the sometimes strongly and rapidly fluctuating propagation conditions.

Furthermore, the influence of the soil properties on antennas with radiator lengths of </<< Lambda/4 is possibly often somewhat overestimated

That said, before investing a lot of time and effort into this matter, it would be worth doing SNR comparisons with the same antenna at the same times of day in the same location on consecutive days.
Very different SNR values occurring in these comparisons would definitely be guaranteed and not an indication of an antenna in need of improvement.
Or in short, leave everything as it is now.

It was really my pleasure to log you! One of the highlights in my SOTA contzcts. Will QSL via BURO !
73 Danny ON4VT

Thank you for the exciting report and the captivating pictures. The picture IMG_7306 and IMG_7434 are my favourites

Congratulations on this successful activation and that you have returned safely.

Congrats on the successful activation, Martin, and thanks for the detailed report and the great pictures!
It really takes some dedication to design an antenna especially for this single event! Well done

Hello Martin. All I can say is…Wow. Great photos and congratulations. Well done.

Well prepared and well done mountaineering on such an iconic summit.

Thanks for the scenic views.

I guess you were using the mountaintopper as radio?
Is this combo (MTR + T1) lighter than a KX2 with integrated tuner? Just wondering

Looking forward to the next top of the alps report.

My TinySOTA box is ca 330 g, the T1 including battery 156 g. The Elecraft KX2 including ATU and battery 570 g (according to the specs). So there should not be a big difference. As I operate CW-only (because 1. of the relatively high chance of success for quick alpine activations without violating my personal no-self-spotting ethics

Also note that the TinySOTA box is already contained in a water-proof and robust Peli 1010 micro-case, while the bare KX2 might not do well in a backpack with crampons and climbing gear. Plus, mine includes a Micro-USB charger for the internal Lipo, so you can recharge it on the hut without a bulky charger.

But I agree the KX2 is a beautiful radio.

Btw: I am considering to build a variant of the new antenna that includes a complete CL-match (by adding a variable capacitor and maybe taps to the coil. This would make the T1 obsolete, and likely still cover the variance in the feedpoint impedance.

The big advantage of the T1-centric system is the speed of deployment - I can throw out the radials, tap “tune” and am QRV in less than 5 minutes. The price is a single point of failure - if the T1 fails, so does the activation. But on a summit like the Matterhorn you have only a single shot anyway - any backup gear would be too time-consuming to deploy.

I am also considering to buy a new Peli 1010 case and mount the inserts rotated by 180 degrees. The paddle would then point to the hinges and the empty cover. In that I could mount a write-in-the-rain log so that everything would be in one place for operating in a free-standing position.

My main lesson learned from activating alpine summits in Summer and Winter over a period of almost five years is that you need to apply a “systems thinking” approach to your SOTA station for more challenging summits, i.e. a solution that takes into account weight and size, time to deploy, space to deploy, and reliability.

A few critical aspects are imho:

Ok, this went a bit off-topic 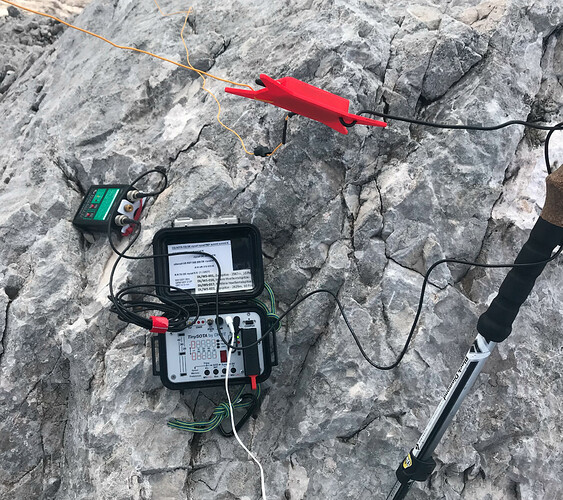 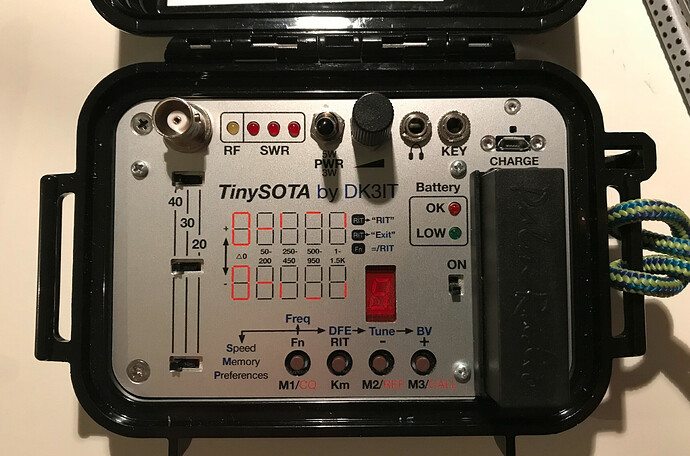 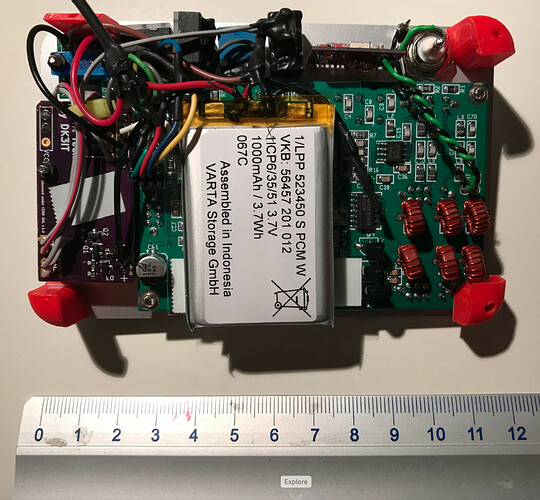 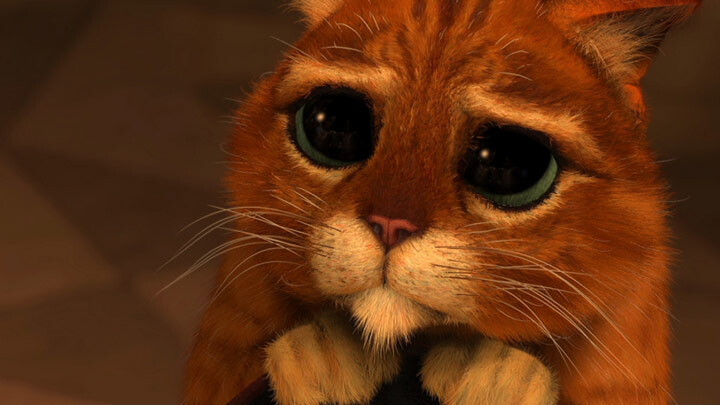 Martin,
You take my breath away. That is on a completely new level. I particularly like your second photograph, that shows who the boss is!!

Congratulations Martin for this extraordinary achievement!

And thank you very much for showing us your your equipment and explaining your thoughts that led to this system!

When seeing your very well thought through system and your excellent building skills, I think, as you already mentioned, the replacement of the T1 could be your next challenging project.

It could be a very simple but robust (water resistant and manual tuning, so no battery power needed) matching solution that is directly attached to the telescopic mast. Like that, your additional base high-Q loading coil would be already integrated, which would further improve the efficiency and reliability of the whole system.
Just my two cents.

Excellent achievement Martin. Excellent report and some smashing photographs, especially the one above the cloud tops.

Your example proves that any success should be well planned. Success is not a coincidence.
Congratulations again.

Congratulations on your activation. Your achievement, and the photos, simply take my breath away.