With the lockdown in England having been eased, I decided to get out with a tent. The weather forecast for Friday night was for fairly settled conditions. I decided to try camping on top of Grasmoor (G/LD-009) on the Friday night, and then make my way across to Grisedale Pike for a 2nd activation. The plan was to take lots of battery power, an FT-818 and make contacts all through the night on 2m and HF.

As usual, I started from home and cycled to the foot of the hill. I set off after work using an old mountain bike. I trust this bike to the heavy loads of camping equipment and leaving chained to a fence overnight, neiether of which I would do to my touring bike. When carrying heavy loads, It is a couple of hours cycle ride to Crumnock water. It is a pleasant ride although the first part is somewhat a uphill, followed by a gentle ride along the side of Loweswater . I took a shortcut through Lanthwaite Woods, and parked the bike near the bottom of Rannerdale - adjacent to the small car park (NY161192).

When cycling to the starting point I strap on empty backpack to the top of the rack and put most of the heavy things into the side panniers. I decanted my panniers back into the rucksack , locked the bike to a fence and got ready to set off .

I started off on the path up to Lad Hows, munching on a couple of cheese sandwiches I had packed for my tea. It was now 1800BST.

I had spent part of the previous evening studying maps in order to determine the highest water source on Grasmoor . I detest carrying water, I use a Sawyer squeeze water filter and virtually never have to carry water whilst in the Lake District – just stopping too drink whenever I reach a stream. Even when camping high-up I try to ensure there is a beck within a short walk, so I that don’t have to lug water to the campsite , . In this case, there is no convenient water source near the top of Grasmoor if ascending via Lad Hows. Therefore, I filled up with water from Cinderdale Beck. An abundance of caution led me to decide to carry around 3 litres with me. Needless to say, the weight of camping equipment, radio equipment, and 3 litres of water, made the next 700m of ascent rather challenging.

The weather was perfect, with views along the Buttermere , Crumnock and Loweswater valley. Looking across to SOTA summit Melbreak, and up the valley towards Robinson and Dale head. To the north was the poor relation – Low Fell. 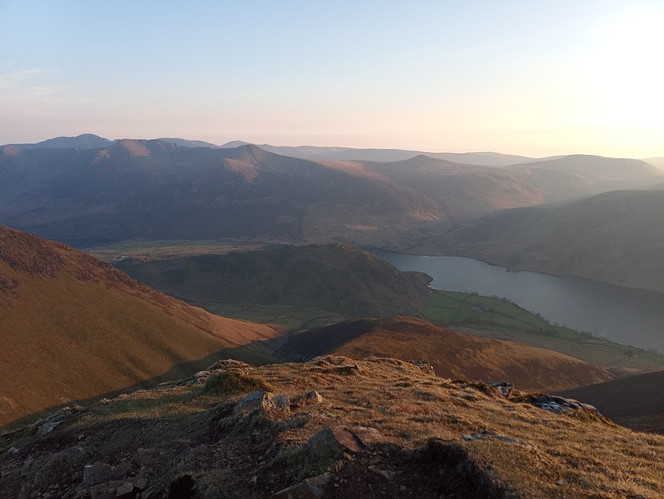 It is pleasant, if direct climb up to about the 600m point; the next 200m are comprised of loose scree. From a distance, it looks like the scree could be a struggle; however, the zig-zags mean that the gradient experienced under-foot is somewhat reduced compared to the earlier slopes - and there is the additional impetus of the summit being within reach. 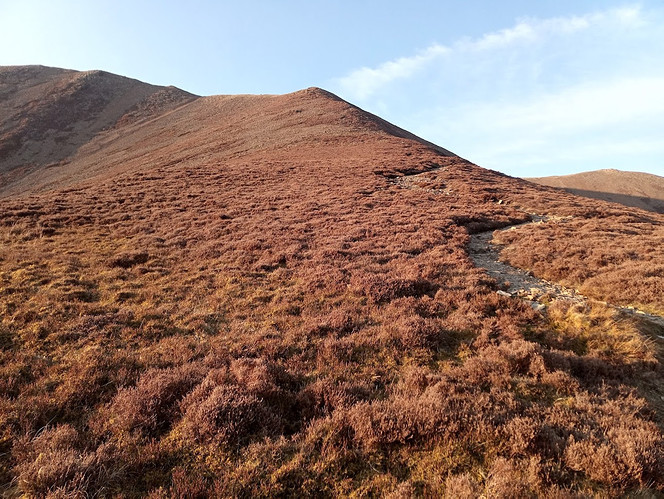 The summit was reached a little over an hour after setting off. Cresting the last part of the climb gave me views across to industrial West Cumbria and the Solway Firth. The summit plateau is rather large, nice and flat, and covered In gloriously springy turf that guarantees a good night’s sleep.
Before pitching my tent I setup my HF antenna – a linked dipole (60m, 40m, 20m) atop a 7m fibre -glass pole. The tent was then neatly pitched at the base of the pole. The rather long feeder allowed the radio to be connected from inside the tent. 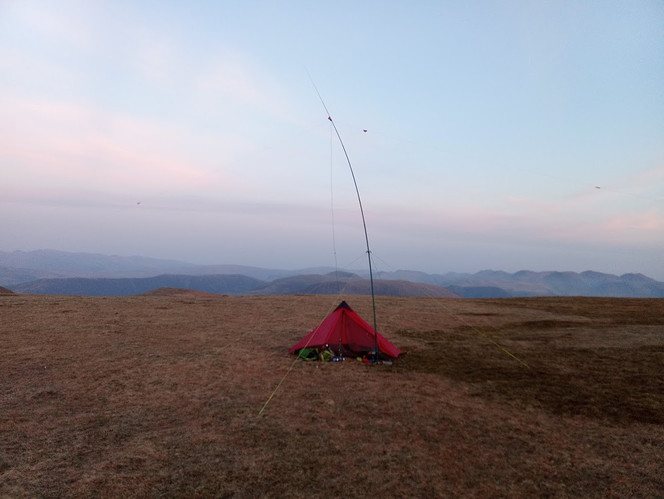 Excited to make a start I began searching around on 40m – to discover little but static crashes and S8 noise. It would seem that although the weather was fine, p[propagation was going to be poor. With no ‘phone signal, I was reliant on APRS for spotting (which worked very weak), but just couldn’t make myself heard on 40m or 60m. At 2023BST I made a contact with F4WBN – and that was the lot for HF. 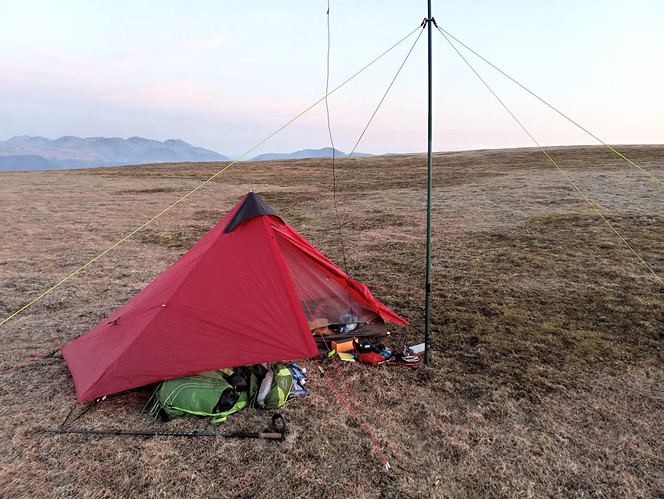 I gave a call out on 2m using the HT, and @G1OHH called in – and kindly offered to raise a spot for my frequency on 40m (at this time, I was not sure if the APRS2SOTA ghad worked). With nothing heard n 40m, I attached the slim jim to the fibreglass pole, prepared my sleeping accommodation and changed into sleeping clothes.

Now inside my sleeping bag I called CQ on 2m at 2105BST. First to call in was @G1OAE, and there then followed around half-a-dozen contacts. I had a good chat with @M7KOM and then a nice lengthy chat with MI0FBI at about 2230BST.

I also called into a net (the International Radio Network Net accessed through GB3AS) and called into a couple of other repeaters. I had another attempt on HF, hoping for a contact in the US, but to no avail.

Each time I swapped from slim-jim to dipole (the fibreglass pole looks too stressed if both are attached simultaneously) I stood for a while to admire the view. The sun was setting over the Solway firth, and the aircraft warning lights on Caldbeck transmitter were clear to the north. A light was shining atop another hill to the E/SE – perhaps Great Gable.

At around 2330BST I closed down for some well earned sleep. It was cold outside, and getting colder – but the dry air and slack winds meant it was a comfortable night. I was using a cheap tent picked-up from aliexpress – the 3F UL Gear Lanshan 1. I’ve had really good experience with this tent – so much so that I have also bought the Lanshan 2 (two –man version). The main disadvantage of one-man tents is that there is no way to adjust your sleeping position. If the tent is pitched such that there is a slight gradient from left-to-right, then you find yourself rolling0over. With a two main tent, you have space to sleep diagonally across the footprint.

Awake at around 0550 I tried again on HF – hoping for a S2S to new Zealand perhaps (!). Conditions had improved a little, but the bands remained in poor shape. On to 2m and I was pleased to have a call with M0SSD, who had noted my alert for 0600BST. There followed another 6 contacts before closing at 0640BST. 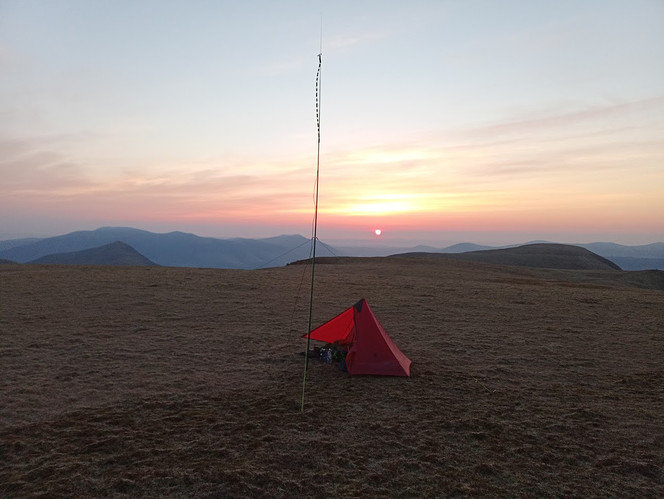 Everything was dismantled and packed away by 0730BST, and it was a pleasure to have everything dry (including the tent footprint). I headed off the summit in an easterly direction towards Wandhope Moss –rather than the more direct NE route to Coldale Hause. The intention was to explore a little on the way to Grisedale Pike. Wandhope Moss would make a lovely camping spot for future expeditions to these summits. 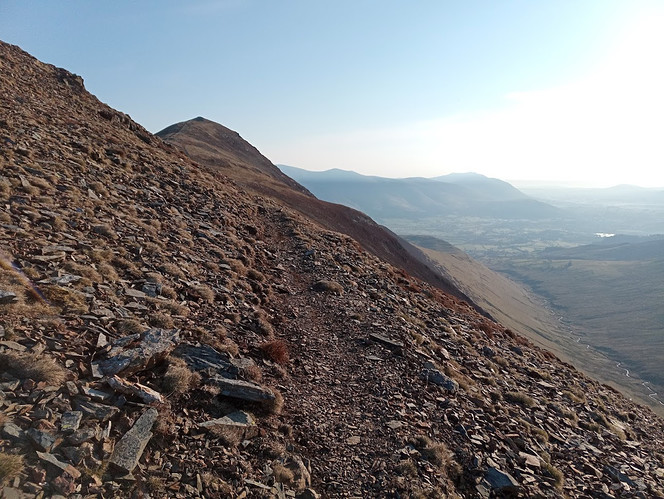 The short jaunt across to Grisedale pike soon passed – it was a very pleasant walk, with several long valleys coming into view, revealing views out of west Cumbria in one direction, and Keswick in the other. I had noticed that G4YTD had raised an alert for Grisedale Pike on this same day – at 0830UTC, it was around 0730UTC when I reached the summit and I was pleased to find G4YTD setting up his equipment For SSTV. It was interesting to see his setup, including an IC705.
I put out a call on 2m using a handheld and RH770 – not really enough space for HF here. I was pleased to rapidly get six contacts, followed by a contact with G4YTD on around 500nm (although since we are both in the activation zone, and 500nm is not an amateur band, that one didn’t count).
After saying goodbye to G4YTD I headed back to Grasmoor, the battery in my HT died on the way back so I was unable to manage an official contact with G4YTD. I re-ascended Grasmoor via the more direct route to the summit from coldale hause (following the line of the crags on the north face of Grasmoor. 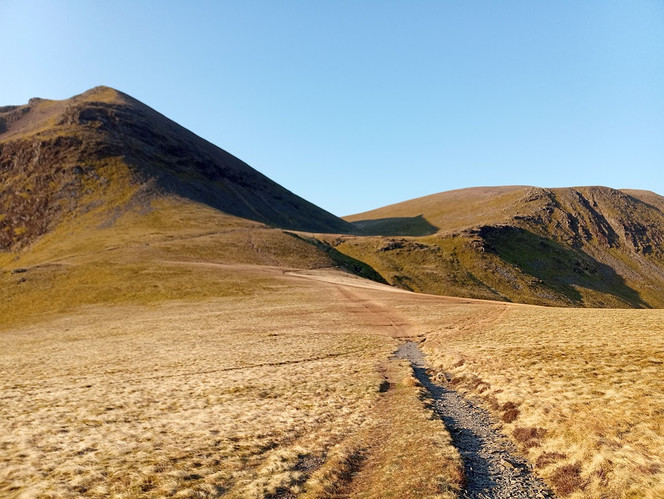 Back on the now familiar summit, the sun was shining strongly, and it was time for sun-hat and suncream before putting the antenna back up. It was now 1020 BST. I put the HT on charge while working 2m on the FT-818. I made 11 contacts on 2m, with some good chats about my sleep-over on the summit.

With the HT charged, I was able to send out an APRS spot for 40m. Conditions were much improved on the previous day, but still very difficult and I managed 15 contacts including two S2S (@HB15SOTA on HB/FR-036 and @DL3TU on DM/BW-695). About half way through my 4200mAh LiFe battery suddenly dropped in voltage to around 2.6V, so I swapped to a 4000mAh LiPo battery I was carrying as a spare – glad I was carrying two batteries.

At around 1130 I gave a go on 60m, but nothing heard. I decided to go QRT, and dismantled my equipment ready for the decent. With a daysack the decent from Grasmoor can be safely acaheived very rapidly, however with I took my time on the descent. 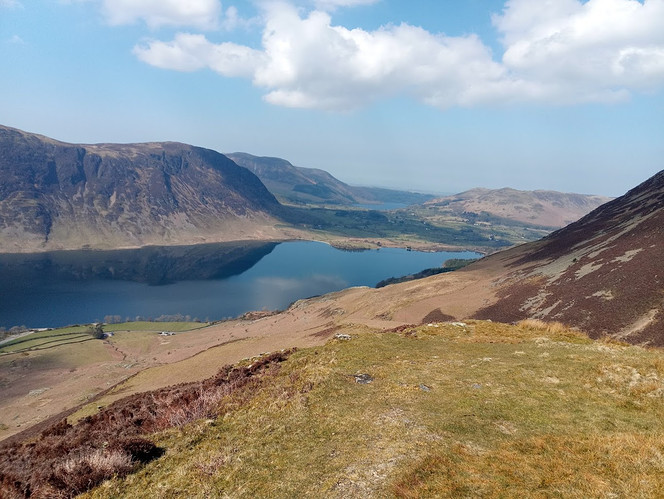 Before getting back to lake level found a secluded spot to change back into my cycle shorts – not something I wanted to do in a busy car park!

I was pleased to see the bike where I left it – chance for a good sit down in a comfortable leather seat for a couple of hours! With equipment stowed n panniers, and pack strapped to the rack I was soon heading off back home. The lakeside was busy with cars, and I note that the circular bus route from Keswick was also back in action. 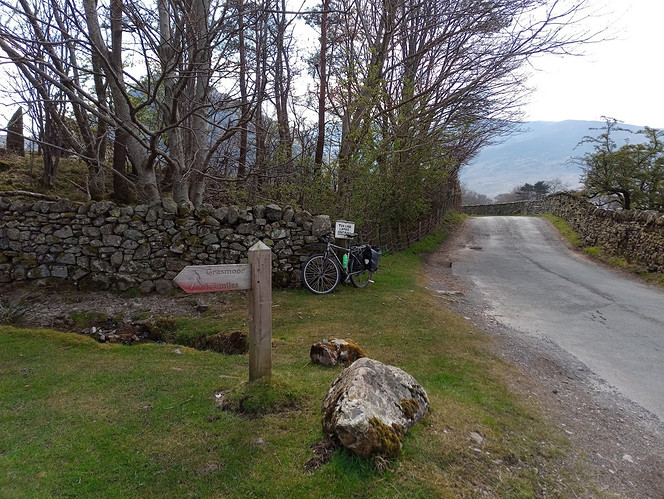 Operating atop a summit overnight was great fun – lots of activity on repeaters and a couple of good chats. It was also good to activate the following morning without leaving my sleeping bag. I was pleased with how well APRS SOTA spots worked and to meet G4YTD – so a good activation. Thanks all those who chased me. 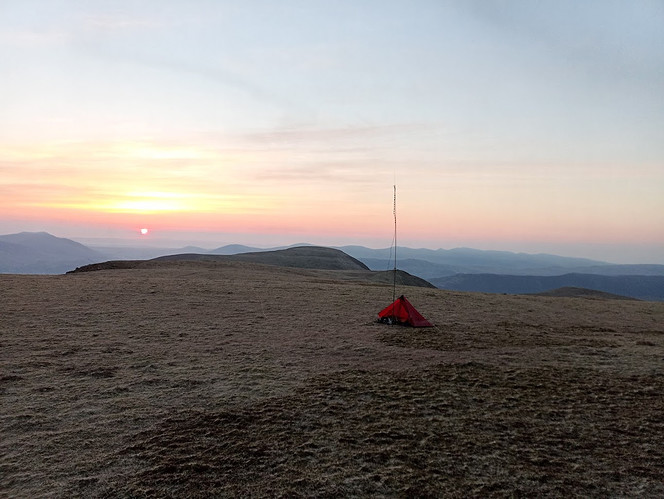 Hi Matthew,
a nice adventure and a good told story. Thanks a lot.

Hi Matthew
Epic adventure on your side of the hill, just a slog from my side carrying too many batteries and water.
Good to meet you on the summit of Grisedale Pike, and complete an audio s2S.
SSTV receive worked well, but there were some problems preventing tx from my side, a nice morning out though.
See you on the next one.
73
Tim
G4YTD

I havent wild camped in years but theres nothing better than waking up and being in the hills already. I’ve yet to sleep on a summit but getting the feeling your all alone and have the hill sto yourself is great. Having weather like you did in the pictures certainly helps.

Inspiring stuff. Glad you had fun. It looked awesome.

My last wild camping experience i remember was camping at styhead tarn and putting my tent up in gale force winds, and holding the tent up with my body some of the night. The next morning it was still blowing a gale and raining heavily, so realising it was my choice to be up here i stayed there in the tent until we decided we’d had enough and decamped and walked down back to the car, in sunshine by this time! We were planning on doing around 3 or 4 SOTA summits that weekend, still haven’t been up some of those planned hills!

Another fine story and long-days-in-the hills!

Thanks for the interesting story and wonderful photos! It’s so nice to see the radio in the tent at the summit. Spending the night at the top and being QRV is unforgettable.
73
Vlad
RX9WT

Thanks for sharing. What you said about water is certainly true. It is heavy! One of the basic challenges if your out overnight is having a water source enroute. Especially if it’s hot and you need a couple of litres just to get up the hill