I activated G/DC-007 Watch Croft today, the last of the 7 SOTA summits in DC to be activated by me.

I was looking forward to nice views but a sea mist put paid to that!

There are several places you can park for Watch Croft. I chose the most southerly. You can see it at the 193 spot height to the west of where the building called Dakota is in the lower centre of the screen. 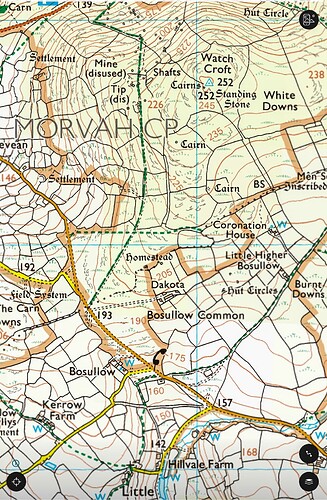 The bridle path, marked in green runs North East from here which brings you after a kilometre or so to the entrance to a cottage. In this photo below the path to the summit starts on the right, just where the track bends. Its hard to see in the photo but is easily identified on the ground. I wouldn’t like to approach the summit from here if there was no path as the gorse is thick. As others have written this isn’t a summit to approach wearing shorts, boots and long trousers are essential! 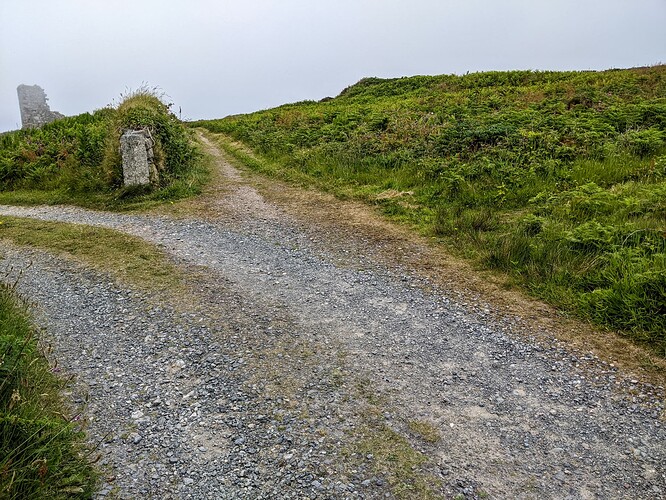 The Trig point makes a convenient support for the pole but it is surrounded by large rocks which are very awkward to walk about on.

I wanted to try VHF and UHF so I hoisted the 5 element Diamond Yagi and called CQ after posting a spot. Action was slow but Don G0RQL replied after a few minutes of calling. And that was it on 2m SSB. I swung the beam around, pointing north, east and south in the hope of reaching someone in France but without success.

I’ve modified the Yagi to make it much easier to change from horizontal to vertical so it only took a few moments to switch to 2m FM. I spotted a frequency but had no replies so I switched to the FM calling frequency of 145.500 and found John near Clovelly in North Devon. He isn’t listed in QRZ so doesn’t appear on the maps at the end.

After an antenna change I called on 70cm SSB, Don replied but we were only 55 in both directions. Then Damian M0BKV came through to make it 4 QSOs but sadly only 3 unique callsigns.

So after another antenna change my newly constructed 6m Delta Loop was flying in the Cornish breeze. You might just make it out in this photo. 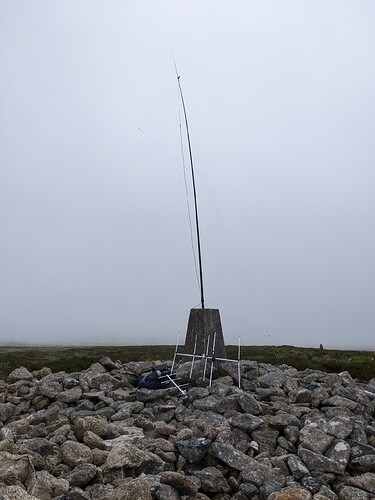 Note the discarded Yagis and those boulders!

It would have just been my luck to find the 6m band closed after being reliably open for several weeks but as it tuned to 50.313 I heard the unmistakable warbling of digital signals. What might look like a cracked screen is the reflection of the delta loop. 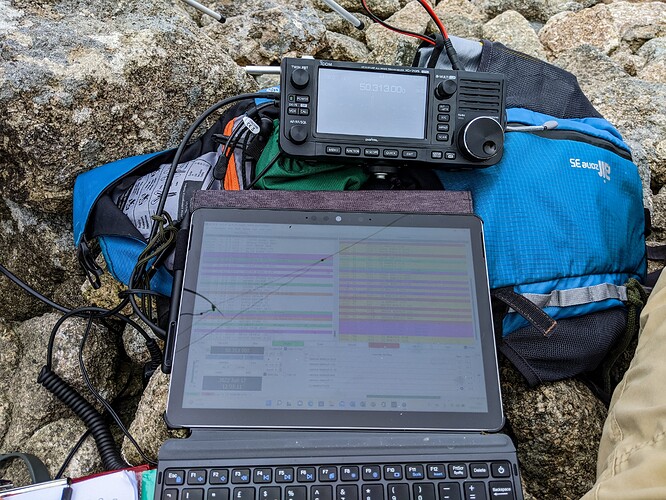 Looking afterwards on the PSK Reporter map I was heard all over Europe but not across the Atlantic. But I soon had 3 QSOs logged and with a time deadline looming for me to be back at the campervan to rescue my wife I closed down at that point.

With more time I would have tried 2m again and I’m sure a 4th QSO could have been logged. Later in the day 6m might also have been open to NA.

Here are the maps. 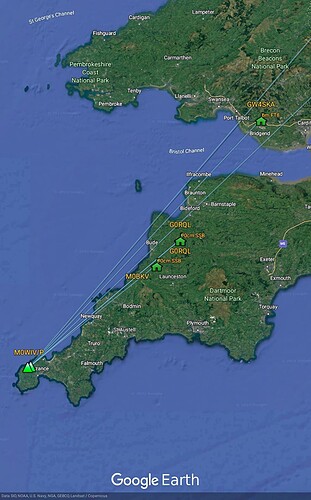 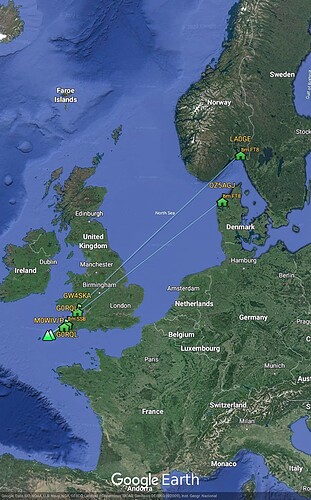 Very many thanks to all chasers. 2m and especially 70cm are a struggle from this remote location but with perseverence it could be activated, weekends probably the best time.

6m FT8 is like shooting ducks in a barrel when the band is open but fun for a short period.

And sincere apologies to Armin @DL6GCA. Having left a vital cable at home I haven’t been able to use CW on this trip and 30m CW would have been worth trying to get Armin his Complete for this summit.

2m and 6m were buzzing on FT8 but SSB was slow - nothing on 6m and a station 15 miles away later said he didn’t hear me.
I managed to work @M0BKV from the summit on 2m SSB so there was some good propogation this afternoon, it’s a shame you only managed 1 contact. I only managed to work @G0RQL on FT8.

I’ve just compared our results on PSK Reporter - you got much further on 6m than I did so the delta loop looks like it’s working pretty good.

I’ve just done a screenshot and yes, it seems to have been booming out. It’s interesting to see how the coverage is not universal. There was clearly an opening into Scandinavia and towards the Balkans. Not a lot in Spain and nothing in Italy.

The summits around Minehead in G/SC are probably going to be my next target. They are a bit closer to GW so we may yet manage a QSO. 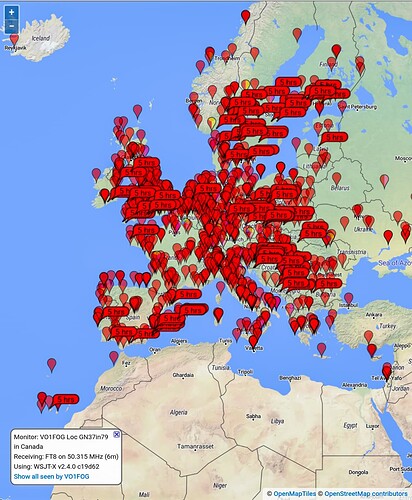 I’ve tried twice to qualify that summit on 2m without luck, the third time I used 40m phone successfully. That granite clitter around the trig point is evil to walk on! Incidentally, the cottage is the old “Count House” (office) for the nearby Watchcroft tin mine.

I well recall getting “gorsed” setting up my HF dipole. Like yourself I started with 2m SSB and worked 6, but that was back in the day (2007) when the Birmingham Mafia and others were active. Don’t ask! I used 60m SSB and 30m CW on HF to get a decent log and then got “gorsed” again packing up. Can’t say I’ve ever had the urge to go back.

When I did this one in October 2009 I took a shortcut through the bracken on the way down and curated a small collection of tics in the process. There again I seem to have the uncanny knack of doing that almost anywhere

I well recall getting “gorsed” setting up my HF dipole.

I found a circuitious route to the summit that avoided the gorse and only had to teeter on the clitter to string up my W3EDP.

Hi John,
If your key and radio use the 3.5mm stereo connectors, you may be able to pick up a suitable cable at any supermarket or even petrol station, which often stock spares for users of audio devices. Having been caught once without that cable, I carry a spare, but I know that’s cold comfort when you didn’t have one when it was needed. 3.5mm connectors are gradually being replaced by mini-usb and micro-usb for connecting audio players and phones to car stereos, due to the need for dc connections as well as audio, but the cables are still there in quantity in stores stocking spare cables. The “pound” stores would also be a source.

Interesting to see how well the delta loop worked on 6m. Sorry to see the low level of activity on 2m ssb.

Now you got 7 qso together in one hour - even though you used 2m, 70cm, and 6m … and used SSB, FM and DATA… and you have spotted yourself.

It’s a tedious business - but here in the Black Forest, especially in the mornings on a weekday, it wouldn’t be much different. On a Sunday morning it looks a bit different.

I was hoping for a nice spradic E opening for you - then you might have a full log.

I will have my completes at some point. The summits are activated every now and then.

Andrew, thank you, I do have a spare cable but of course that isn’t much use if I didn’t have it with me.