I thought I was having another senior moment Phil so I was glad you confirmed the error when we spoke. Thanks for the contacts today, sorry I missed you on the last ones.
Frank MW0OFA

I listened to you today Phil but you seemed quite busy and 10W from my temporary QTH near Whitby wasn’t getting through. But I did have a CW QSO with @CT7AFI/P on CT/BB-002 as a consolation prize.

Enjoy the trip. It’s bucketing down in Yorkshire tonight.

Many thanks for the DX contact when you were on MN-034. I hope other NA stations found you during a nice opening on 20M CW. I could hear you and all the EU chasers clearly here in NY.
Stay well & 73!
Mike, WB2FUV

Hi Mike
Yes, the 20m band was very good yesterday from Portugal into the whole EU and then later to USA. I was pleased to hear and work several other USA stations after you. I think the best DX was KR7Q in Montana. Hopefully I can repeat it later today when we are in the CT/TM area. The band was so good I will start on 20m every time today. Victor CT/G4ONL/P is concentrating on 30m and if we have time left we will share the 40m band between us. I think Victor may have a go on 17m, which he was thinking about yesterday.

Well done on the CW QSO John! Give me a call is you hear me strong enough. I’ll be listening out. Only one S2S yesterday and that was with John CT2GSN/P on 40m on a summit within ground wave range in the CT/MN.

Nice one Phil Thanks for contact. Enjoy your holiday.

FB Alan - thanks for CW QSOs today. Good to see you in the pile up. Busy day, now back at the hotel looking forward to the dinner with Victor.

A couple of photos - Phil G4OBK having lunch on Monte Sameiro CT/MN-035, living large with Tosta Mista, custard pies and beer on Tuesday before our activation. MN-035 is a drive on summit with churches, hotels, cafes and parks.

Then Victor G4ONL on Serra de sao mamede de Panafiel CT/MN-030 the same day. On MN-030 we had to share one antenna due to the resticted space on the summit, so we were not able to operate at the same time with our own respective stations.

Four summits today planned in the CT/MN which are closer to where we are staying than the ones in CT/TM and CT/BA that we visited yesterday. 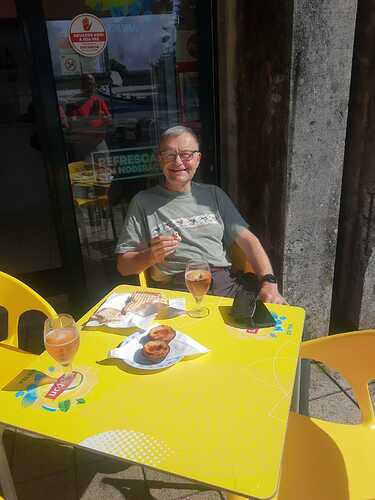 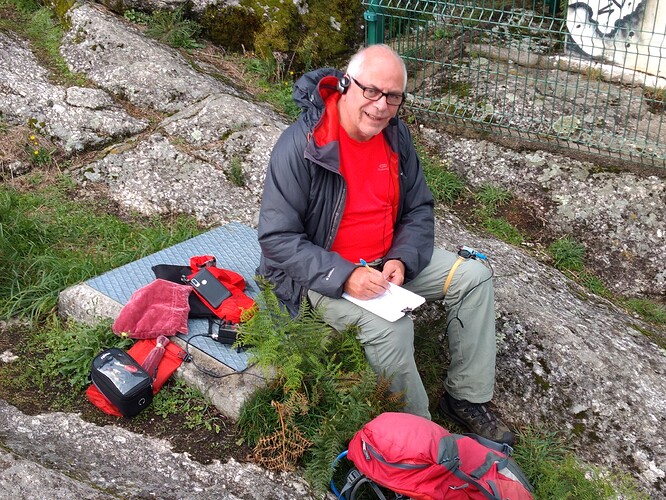 Today Victor and I will enter North West Spain to activate three summits there. EA1/PO-019, EA1/PO-015 AND EA1/PO-032. On the way home we will activate again in the CT/MN area.

The amazing circular houses you will see on the way up to EA1/PO-032 are worth stopping for, if only to take a few quick photographs. The hill was covered in low cloud when we visited so I hope it will be clear for you.

OK John. I didn’t know about that place. We are away now, time to get the tank filled and hit the road.

I took my sota gear to work yesterday as I wanted to work both of you.

I was working at an excellent location and under no pressure to do much (I’m self employed!!) So I didn’t. And it was a nice day too. equipment out and up I had no trouble chasing the first couple of European activators I heard, and was just waiting for you to come onto 14mhz. - then morse key socket in my little HB1-B came loose and stopped working.

I didn’t enjoy the rest of the day at work

I’ll tell you what Phil. You’re brilliant in those CW Pile-ups. Thanks for contacts and stay safe
Best 73

I always listen out for the S2S of course but I didn’t hear yours yesterday. The 1500z pile up when I was on CT/MN-032 at 1510z turned into a riot for a time - thanks to a chaser in south east EU that would not stop sending his call over other stations when I called them and also when I was transmitting myself. I logged him 5 minutes later and then again on SSB 18 minues later. He should know better as he is also a prolific activator! The others calling at the time, included F4WBN, SA4BLM, and DJ2MX amongst others, will have also heard his lowly standard of operating. He’s done it several times on this tour but yesterday on CT/MN-032 was his worst performance so far!

On that summit I was plagued with some QRN from a wind farm on which the summit is located. The nearest turbine was less than 50m away from me. That is probably why I couldn’t hear you. Hopefully we’ll make it today if you are on - this will be day 6 of 10 on this trip.

Hoping for a few more Phil, as and when shack time permits. Always great to work you.

… then morse key socket in my little HB1-B came loose and stopped working.

Commiserations David. I’ve put a short extension lead on the key and headphone sockets on my HB1-A to avoid straining them. Probably the worst feature of the rig is a lack of robustness. 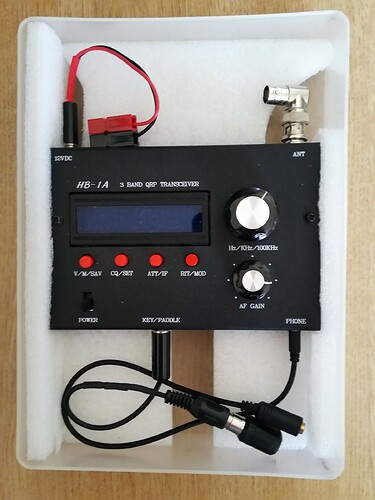 Thanks for that Phil. Good idea and just within my technical (lack of!) competence. The headphone socket was becoming more temperamental too. I’m sending the HB1 back to get fixed and I’ll add your mods when I get it back…
David

Its Gerald who gets the credit for that one! On our way now to CT/TM-001. Change of plan 15Km away by car.
Gerald logged on first two summits today, FB