Strangest antenna for a SOTA activation?

I recently activated Long Knoll (G/SC-007) on 40m by tuning up the barbed wire fence which runs across the summit!

There was no particular reason……it was just a slightly random & childish experiment!

There is a video of the activation on my YouTube channel “Amateur Radio UK” (easier to find by searching for my callsign) if anyone particularly wants to see it. 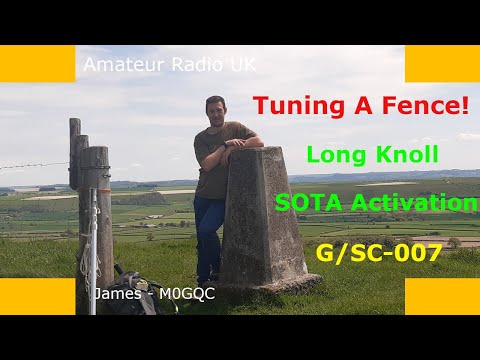 This left me wondering what are the most strange & unusual antenna arrangements that people have ever used to activate a summit?

Transmitted into the plug end of my headphone cord, with the phones up a tree, when my actual antenna mysteriously failed to make it into my pack.

Did you make any contacts James with the barbed wire antenna? Surely on 40m you would have worked a few EU stations?

The strangest antenna SUPPORT I have used was on 2/11/2017 when I activated Lamington Hill GM/SS-172. This was my 3rd summit of the day and I had inadvertedly removed my pole from my rucksack after summit No. 2 and left it in the car. I therefore used my walking poles bungied to the fence to support my link dipole at an estimated height of around 7ft 6". The low antenna gave good results - log below - I even qualified on SSB with 4 QSOs, and 18 on CW in a 25 minute session - and I worked NE4TN Walter in Tennessee as well! Rig was a KX2 with 8 watts output. 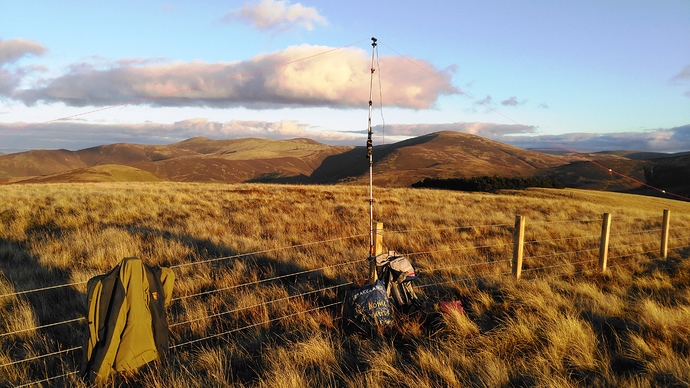 Transmitted into the plug end of my headphone cord, with the phones up a tree

I love the creativity. How many contacts did you make with that arrangement?

One year we went up to the hills for the VHF contest, and the activity was pretty slow. So I clipped 8 two-foot clip-cords end to end and threw it on top of the canopy we had, and stuck the end into the co-ax connector and
worked a bunch of QSOs on 20 meter CW with about 20 watts! It worked
great.
73,
John K6YK

Did you make any contacts James with the barbed wire antenna? Surely on 40m you would have worked a few EU stations?

Only 5 stations on 40m. I wouldn’t call it a good performer but it would get you out of trouble if you left your main antenna behind.

The contacts on 20m & 2m were made using my “proper antennas”.

Transmitted into the plug end of my headphone cord, with the phones up a tree

I love the creativity. How many contacts did you make with that arrangement?

A few dozen, but I actually made a second mistake on that occasion… I accidentally ran less than one watt. Didn’t matter to KT5X, in New Mexico, who snapped me up and gave me a decent report. That was in a better part of the sunspot cycle.

By strange coincidence I made a video yesterday using an electric fence as an antenna. The video will be published in few days on my Radio Adventures YouTube channel. It worked. I was not in the least shocked.

When I read the post I immediately thought of Juerg @HB9BIN when he forgot his antenna. Report here: 007 and HB/TI-102

Hence the electric fence in the photo of your “stinging nettle mishap”!

I presume that your OK now?

I’ve got an electric fence in my field that I’ve been meaning to try tuning up for ages to see what it can do…I just haven’t got round to doing it yet.

Did you try using another bit of the fence as the counter poise by any chance?

Nothing interesting to report here. But challenge accepted! I’m taking some croc clips with me when I go activating!

Did you try using another bit of the fence as the counter poise by any chance?

I used a single piece of wire laying on the ground as the counterpoise, roughly 10m long.

I did however run 20m on my normal vertical setup (7m Spiderbeam mast) & used the fence as a counterpoise for that with great results! 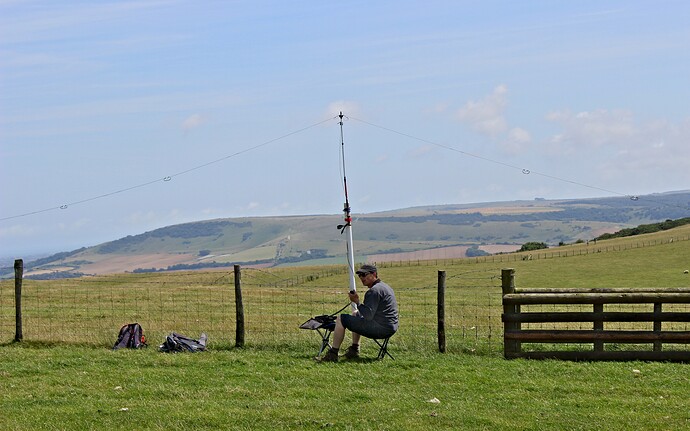 However, the weirdest antenna I used was a coax cable lying on the ground.
I wasn’t aware of this and wondered why I had to call several times and use the full 100 W to make the qso with a VK6 portable station. Back home, I recognised the antenna was broken. I obviously tuned nothing but the coax shield and the counterpoise and made several EU contacts and one DX contact with this setup.

A few days ago I tried the following.

A 1m long telescopic antenna, electrically extended with a rotating coil from an old antenna tuner and the coaxial cable as a counterweight.

Result. 5 S steps worse than my horizontal EFHW in the background. 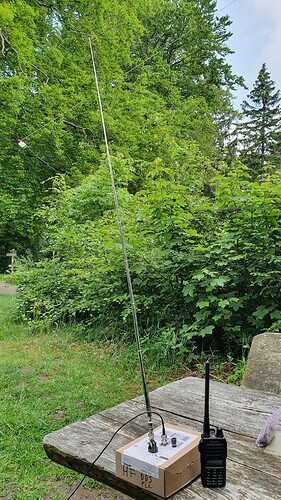 But heard on 20m and 10W in SSB from Lars, SA4BLM and EA7GV. It works! But can be an imposition for the chaser.

This illustrates perfectly how important a good performing antenna is for an activator and how tough life becomes for the chasers when activators use short and coiled whip antennas and the like…
If they even use QRPP, that makes it even tougher…

This illustrates perfectly how important a good performing antenna is for an activator and how tough life becomes for the chasers when activators use short and coiled whip antennas and the like…
If they even use QRPP, that makes it even tougher…

I absolutely agree, but I’m also wondering how much difference a vertical vs horizontal makes.

Certainly on 40m & below you are generally relying on NVIS propagation (at least here in the UK to reach chasers in Europe), so I’m imagining that a horizontal with a high take off angle will probably perform better then a vertical with a low take off angle.

On the higher bands (I think you said that you did it on 20m), this might not be such a factor. In fact the low angle of a vertical may be preferable on 20m due to the longer skip………in which case your experiment demonstrates the point even more clearly!

I think it is not so much a question of polarisation but more of the antenna length: 1 m compared to 20 m (or so).

I think it is not so much a question of polarisation but more of the antenna length: 1 m compared to 20 m (or so).

I completely agree. A small 1m antenna is never going perform as well as a full size antenna.

Putting aside “polarisation” & the fact that one antenna is a heavy compromise, my point was about the “take-off angle” of a horizontal compared to a vertical.

The take off angle of a vertical isn’t optimal for NVIS contacts. Even a full size vertical antenna could put you an S-point or two down compared to a full size horizontal for local NVIS contacts as a vertical has a null above the antenna. For DX contacts the opposite would likely be true.

I was therefore making the point that you would expect to see a difference between a vertical & horizontal antenna even if one of them wasn’t a compromise…….not enough to account for the difference seen though.

I use a fishing rod and some kite winders for my antenna. You should see the looks people give me…