Strangest antenna for a SOTA activation?

I thought 6dB per S-point was standard? But I have heard that 3dB is common…
I’m probably confusing something - like power vs voltage… or worse!

I tried one of those last year! Not for SOTA though. Mine had enough inductance (in the form of 30-something turns on a big ferrite toroid if I remember correctly) to resonate on 80m. I sat it on the metal roof with an alligator clip to the roof for a counterpoise. I was heard by local stations but no real contacts. Until I tried JS8 - it worked! I made a couple of contacts. No DX though.

I thought 6dB per S-point was standard?

Ooooopps! For some reason I was thinking of 30dB PER S-point… my mistake.

6db per S unit was the nominal standard that no manufacturer ever approached, in practice. Some recent rigs seem to comply with 3 db per S unit below S9. Why, I don’t know.

Unless you spend an afternoon analysing your receiver with a calibrated signal generator you would never know what any S meter readings mean. Apart from “More to the right = stronger”.

no manufacturer ever approached

I wonder why not? I would have thought it’s just a matter of printing the right scale to go in the meter - at least in the case of an older rig with an analogue meter. But I suppose I shouldn’t complain - my uBitx’s S-meter that I built has no calibration at all! Sorry if this is going off topic.

so far as I know, in most cases AGC voltage is used for S-meter. For signals from S0 to about S4 (or S5) this voltage is constant and for stronger signals this voltage is changing. So for the starting and constant voltage the S-Meter is set to S0 and when changing it goes to S1 and higher. Often S9 seems to be for the right signal level. Therefore the real range from S4 (or S5) up to S9 is spread over S0 to S9 on the scale of the S-meter.
In this way one real S step is shown as about two “S steps” on the meter. So the shown “S step” has only about 3 dB. And S steps up to S4 (or S5) are never shown.

Hi Ludwig,
Thanks, that makes sense. It also accounts, at least partially, for the fact that on my Icom one can often have a clear copy with an indicated S reading of 1 or less, while in theory an S1 is not really copyable. I remember reading a discussion on this subject some time ago.
73, Steven

Regarding S-meters, probably 90% of the SOTA activators I work
do not move the S-meter on any of my HF rigs in the shack. Now &
then there will be a strong one, but not too many. The bottom line
is not the S-meter reading but how well you can copy the station. So,
if I give you a “529” you are S-zero on the meter and down into the
noise a bit, too. If I give you a 229 it means you are WAY DOWN into the noise and I can barely make out the signal report from you.
73,
John, K6YK

I tried another strange antenna once. When I was working for the telegraph company I had an HF mobile rig in the company vehicle.
I was delegated to go and check “wires” from time to time. (we still
had some ariel wires following the railroad tracks up into the 1970s). So, one day I was out in the country
and hooked up a “spare” wire to the radio. This wire was at least 25
miles long before it went into a switchboard in the next town.
It didn’t work very well at all, and there was a lot of interference from
signals on the adjacent wires. I was disappointed to find out my
8 foot long mobile antenna worked better than a 25 mile long wire!
73
John, K6YK

I was disappointed to find out my 8 foot long mobile antenna worked better than a 25 mile long wire!

I’ve tried tuning up a couple of fences (obviously not 25 miles long) which I hoped would perform well. Like you, I’ve found that “properly designed” antennas always seem to perform better than a fence (at least on transmit).

On receive I’ve found that a fence can work quite well…I guess that it’s basically behaving like a beverage antenna.

I have wondered about using fences as antennas or counterpoises but never tried it. On Scottish summits I have been on, I can think of only one that has a fence within 20m of the summit. However, many years ago when living in an old and large accommodation block, I tried connecting my SW receiver to an iron radiator which worked surprisingly well. Next time I am on that summit with a fence, shall aim to take a bit of wire with a clip on the end and my Z-match to see if it works.

I can think of only one that has a fence within 20m of the summit.

I had a look through various years of my logs and I reckon it’s not quite 50% of GM summits that have a usable fence at the summit. Being able to deploy a low inverted V over a fence does seem to help on 60m.

I have wondered about using fences as antennas or counterpoises but never tried it.

Worked well as a counterpoise on 20m when I tried it.

I used a 7m Spiderbeam mast with a non-resonant length of wire, tuned by an MFJ-16010 at the base.

I was careful to state, “On Scottish summits I have been on”. I am not very active and and have only been on a handful of summits in GM. Thanks for info - it is useful to know that there is a good chance of finding a fence. Useful perhaps as antenna, counterpoise or for lashing a mast to.

Much more likely on the lesser summits than the big Munros et al. I reckon I can deploy the pole and an inverted-V using a fence in half the time it takes to guy the pole. On 60m and 40m when there’s inter-G working, even if the fence runs in a sub-optimal direction, the ease of setup and improvement in performance is worthwhile.

Here are my results with an electric fence. 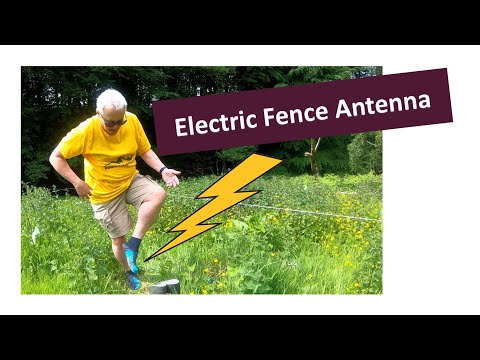 I absolutely agree, but I’m also wondering how much difference a vertical vs horizontal makes.

I often asked myself the same question. That’s why I recently built the following.
My usual 20m long EFHW with 1:49 unun at a height of about 4m horizontally.
A 6m long vertical EFHW with extension spool for the 20m band.
And an antenna switch.
Tested on the 20m band, the signals of about 10 summit calls were consistently the same volume. Only one very weak Spanish station could be heard exclusively vertically.

I’m dubious about any receiving tests comparing antenna A and B, where the conclusion is that the difference in reception is due to polarisation selectivity.

Apart from the difficulty of an L shaped antenna being capable of collecting signals of both polarisations, there is the issue that reflected signals coming from the ionosphere are understood to be circularly polarised, and no longer have their original polarisation, whether the transmitting antenna is horizontal or vertical. This was explored in a series of QST articles a few years ago.

One of the subsequent articles described a receiving antenna which could be switched between Right Hand circular polarisation and Left Hand. This switch was operated from the receiver operating position and usually resulted in one direction being favoured, but it varied with the conditions, distance, frequency etc.

So if one of the antennas under test in the A/B setup is more sensitive to RHCP and the other is LHCP, it is 50% probable that A or B will be the better at that time, frequency, day, position of solar cycle etc. Nothing to do with being nominally vertical or horizontal polarisation and nothing to do with the polarisation at the transmitter end of the circuit.

I’m sure others read the same articles in QST.