On my last activation I had a S2S with Juan Carlos, EA2EEB, activating in a summit close to me. We had the qso on 145 MHz FM (it’s great that I always grab my handheld to get these nice local S2S!).

We chatted for some minutes. Juan carlos use to run VHF FM and HF digital frequently but that day he confirmed that he had just spent some time activating on HF SSTV, where he logged a qso.
He sent me later some pictures of his curious qso: 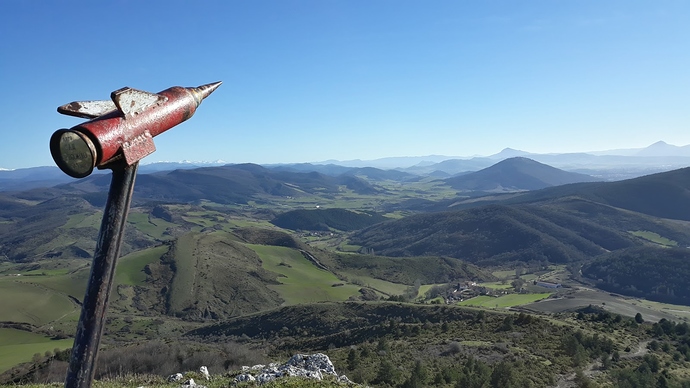 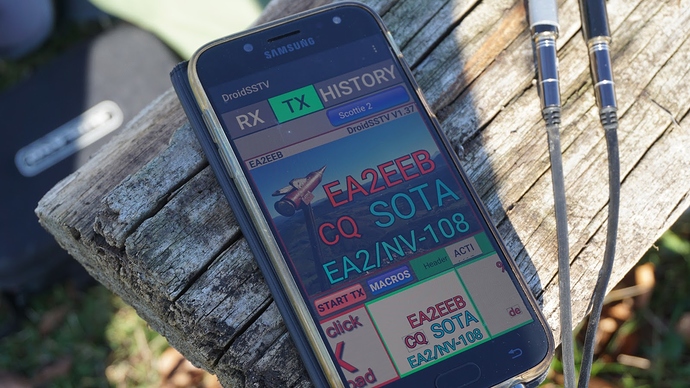 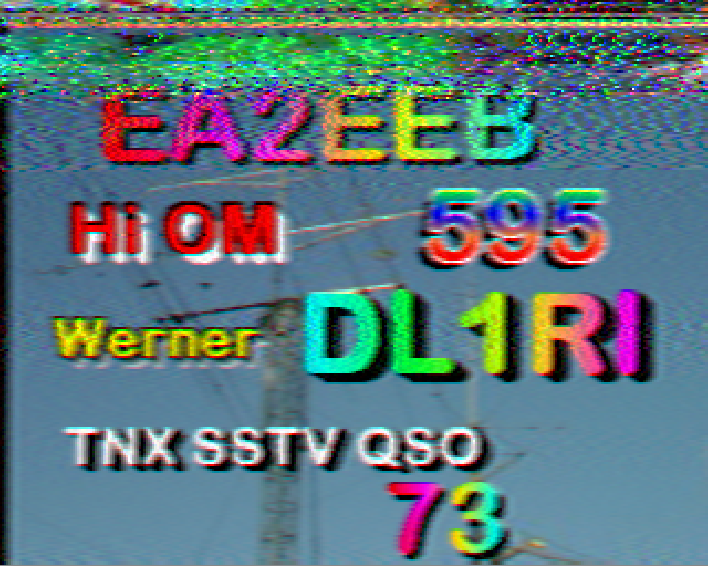 I’ve seen he did it again in his next activation with success.

I’m wondering: are there any activators who use SSTV or did it from a SOTA before?

Yep, I had a 2m SSTV chaser QSO with KK6QMS on a local summit. I sent him a picture of my cat who was sleeping on the floor!

In autumn 2018 I had some SSTV QSO from summits. The idea came to me during a Sota activation. I happen to hear an SSTV signal and remembered that SSTV apps were on my phone.
So quickly took a picture of the summit and sent it. The connection between mobile phone and TRX was purely acoustic.
From one QSO I still have the pictures received by Danny ON4VT send me via email and also mine. 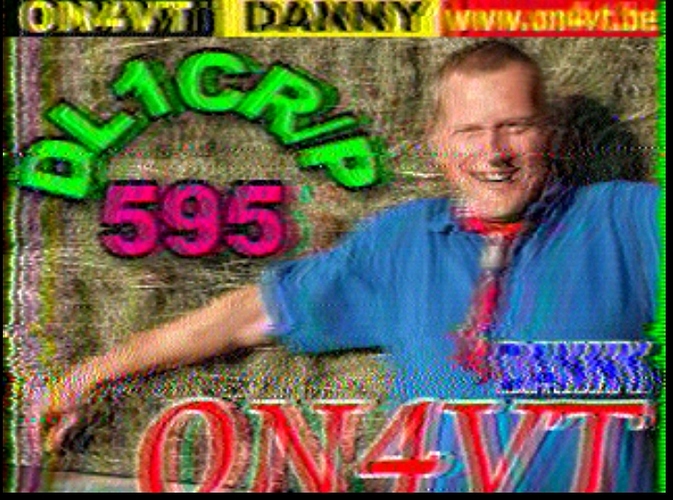 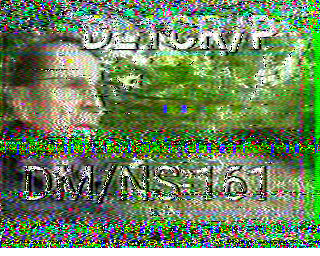 I had a phase of enjoying SSTV about fifteen years ago. I carried a rather bulky laptop with my 2m SOTA gear to the top of Walton Hill (G/CE-002) with the intention of sending pictures to the local SSTV nets (there were two, then) but I failed to receive in real time because the sun was too bright for the laptop screen. I haven’t tried since though it would be easier now with a tablet.

Perhaps SSTV can be included in the next SOTA flavours challenge?
Having got FT8 working portable, I should think it not to difficult to add SSTV

SSTV is already included in the Flavours. SSTV is classed as a Datamode, and would be entered in the Database as “DATA” - and therefore would be picked up as scoring in the Datamode flavour weeks.

I think that on the limited experience of the first two “flavours” the combinations have indeed widened participation but possibly at the cost of reducing participation in the more difficult or the more unpopular components.

SSTV is possibly less technically demanding than FT8 but has its own challenges and needs a different outlook because you are handling images rather than symbols. With the digital SSTV modes you have longer overs at full power and automated re-send of garbled or missed information, then of course there is image selection - what pictures do you want to send and how effective will they be? Plus you can even send images in the waterfall, for instance a callsign. My opinion is that Stuart has a point. SSTV can be lumped with data but it is different enough that it deserves to be a challenge in its own right.

That would necessitate separating out SSTV from DATA in the Database though Brian, something we have never done before and a break with protocol. My point was that SSTV is already included in the Flavours Challenge on 3 of the weeks, if someone wanted to take part on SSTV. Activity breeds activity, so plan it, publicise it and you never know.

I appreciate you would support a SSTV only Flavour and a Topband only Flavour, and understand your reasons. I suspect the remit would not be wide enough to stimulate sufficient activity in either case.

You never know though. If one person really started pushing and promoting for a Topband activity night within the next LF Flavour, or a SSTV activity session in the next Datamode Flavour, then perhaps it could be demonstrated that these could stand alone in the future.

That would necessitate separating out SSTV from DATA in the Database though Brian, something we have never done before and a break with protocol. My point was that SSTV is already included in the Flavours Challenge on 3 of the weeks, if someone wanted to take part on SSTV. Activity breeds activity, so plan it, publicise it and you never know.

I should have made it clear above that there is a problem in including SSTV in data, in that the SSTV most frequently heard on HF, for instance 14.230 and 3.730, is an analogue system and not digital, though the SSTV usually heard on VHF is digital. If SSTV ever becomes popular for SOTA (which I think is unlikely) then we may have to have a separate category for image.

If there is likely to be any interest in SSTV for the next data flavour in May I shall definately get going here again, at least as a chaser, all I need to do is locate an RS232 to USB adapter and download whatever the current digital SSTV mode is, as I think that the HamPAL that I used to use is now obsolete.

I take your point about promoting these less popular flavours. Only six activators took up the challenge of Top Band in January, hopefully more will take part in April if there is encouragement. Of course, in its own way Top Band is more of a challenge than say microwave, in that if you throw money at microwave you can get an effective SOTA station, Top Band needs intelligent compromising.

Sweeping assessment Brian. Might well be correct for yourself, but it all depends on the individual’s understanding, experience, confidence etc. Personally, I’d find uWave far more challenging than Topband, though neither are trivial in a SOTA context.

As I see it a microwave station is compact and straightforward to use - getting contacts may be harder. Top Band needs space for the antenna or a careful choice of compromise, but at least there are many more stations you can work. I find it telling that slightly more activators were on microwaves than Top Band last year, particularly since before the appearance of the B license in 1964 Top Band was the beginners band and the main mobile band!

I tried but the coils that enabled me to match my 60m dipole in the garden would not do so on the two hills when I had time and inclination to try. I have no idea what is wrong but expect to have another test session before the next 80/160 week. The 80m coils are working pretty well, so I don’t think it can be a problem with the aerial itself. The problem with 80m is the QRM - almost every time I find a clear frequency someone else comes in with an overlapping signal, often before my 4th QSO.

For April (once I have sorted out the aerial problem) I may well take the amplifier up some local smaller hills and try a bit of QRO on both 80m and 160m.
73,
Rod

is an analogue system and not digital,

I have no idea what is wrong

let me come back to the SSTV thread: I’d like to clear what is a valid 2 way SSTV contact for SOTA.

I guess this should be the way:

Is this right? That means two different transmissions each way… (and two pictures to be sent / decoded).

Traditionally in SSTV contests, one station sends an image containing a 4 digit number. The station receiving that image then sends the number by voice to the image sending station. Then they swap. The second station now sends an image with their number and the first station sends the number back by voice. Good contact is both stations successfully receiving the other station’s number.

Yes. Martin 1 and Scottie 1 use frequency modulation with the picture elements represented by audio tones.

On that basis SSB, AM and FM speech is transmitting data. All images are data. All information is data. You have created a really worthy impasse!

Indeed Brian but convention and context is what is used to distinguish voice from data.

I know that it is conventional to sneer at WIKI, but it says " Like the similar radiofax mode, SSTV is an analog signal. SSTV uses frequency modulation, in which every different value of brightness in the image gets a different audio frequency." I think you are playing word games. If you want to continue I will be back after walking the dog.