Congratulations for the first activation of the famous Matterhorn (HB/VS-006). I wish you a safe trip home! I look forward reading your activation report!

Unfortunately, I could not hear you with my “modest” station at home! … But it does not matter. I will never complete this one!

congrats! My jaw just dropped when I noticed the ‘hamalert’ message on my phone! Hope you get down safely. I recently watched some videos of climbers on top of Matterhorn, and just watching made me dizzy, hi. Well done, congrats again, and I’m also looking forward to hearing your story!

You overachievers never cease to amaze me with your accomplishments! Great job. What’s next???
73
Paul HB9DST

Yeah, that is really a brilliant achievement! Well done!
If the weather is OK, me and my partner want to climb Matterhorn end of KW 31. I’m really looking forward to this!
73 de Martin, DF6MH

Outstanding achievement indeed!
For most if not all of the mountaineers in Europe, Matterhorn is a well known, impressive and ever admired beast, but given the Woldwide dimension of the SOTA programme in these days, I think there may be some Reflector readers unfamiliar with this amazing mountain in the Swiss Alps and so they are not capable to understand the scale of this achievement.
Here is an illustrative picture: 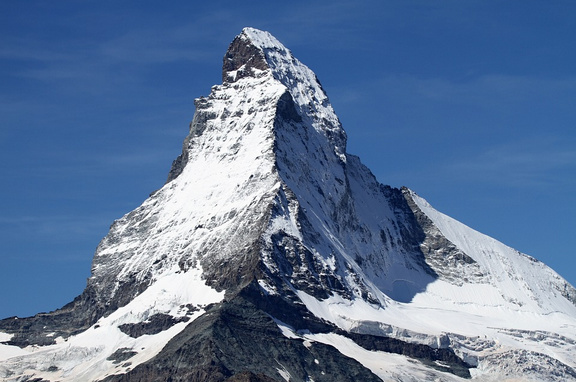 The beautiful picture posted by Guru@EA2IF has unfortunately also a dark side:

Out of this World, well out of my World anyway. Magnificent!
For me - G/Northern Pennines this weekend - Just to be safe!
John

Wow that’s a story!
Does anyone have news? Did everything work out fine for them?

Thank you, everyone. Yeah, we came good and save, up and down. Manuel will soon show a short report with a few pictures here.

Thanks everyone! We’re back home and had a great time climbing this iconic mountain.

Radio-wise, our activation was not as successful as we would have wished it to be – we only had a few minutes on the summit and were there early in the day with modest radio equipment (KX2, MFJ whip, counterpoise thrown down the south face). Nevertheless, we each got two QSOs, making this a valid activation according to SOTA rules, but we’ll have to obtain our 10 points elsewhere

We were especially delighted to have an S2S with Jürg @HB9BAB, who made his 1054th activation of Altberg HB/ZH-015 that day – as luck would have it, just at the right time.

Matt and I decided to climb the Matterhorn with mountain guides (a first for both of us – so far we have done all ascents on our own), for safety and as the correct route on the Hörnli ridge is not so easy to find, especially in the dark. Straying off route causes rockfall that endangers other parties. Last year at least 10 people died attempting to climb the Matterhorn.

Both ascent and descent each took 3½ hours and were relatively strenuous, but except for a fierce wind on exposed sections and on the summit, the weather was fine and conditions were quite good given that the season had just started. However, the final ~200 meters below the summit were delicate due to fresh snow from the past few days.

Of note, just as we started our descent, a group below us went the wrong way and dislodged a huge rock, which bounced down the steep slope with impressive speed and only barely missed another group of climbers further down below – it would have certainly been instant QRT for them had it hit them. Maybe it’s good that we played SOTA for a few minutes longer, otherwise we could have been at that particular wrong place at the wrong time?!

@HB9DST What’s next… Well, there’s no denying that SOTA activations on mountains like these are mostly ego trips, and while I certainly enjoyed the opportunity to be on top of Matterhorn, I’m looking forward to activating some more easily reachable summits in the near future, where a proper SOTA activation with at least one hour QRV, decent radio equipment and lots of QSOs is possible

@DF6MH Good luck with the weather! It really is a nice climb. Hopefully you’ll have more time on the summit for a proper activation 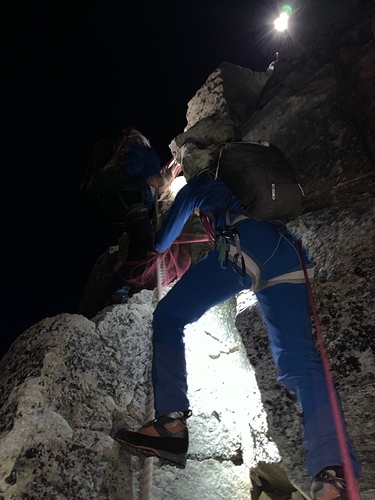 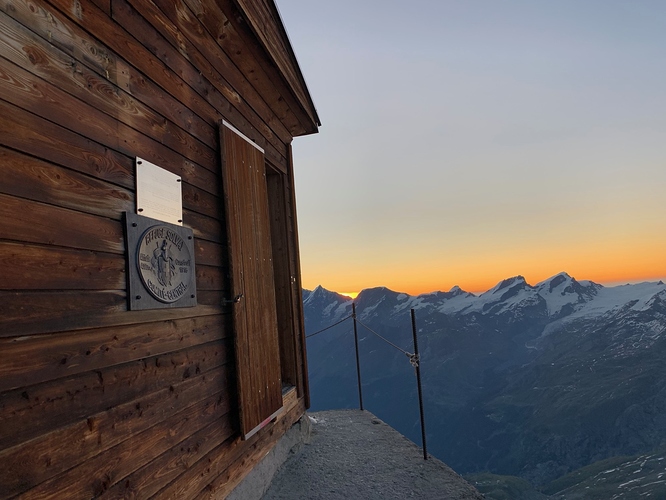 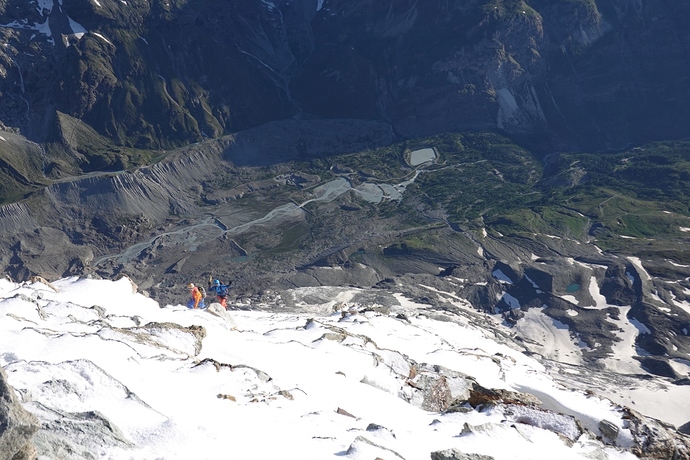 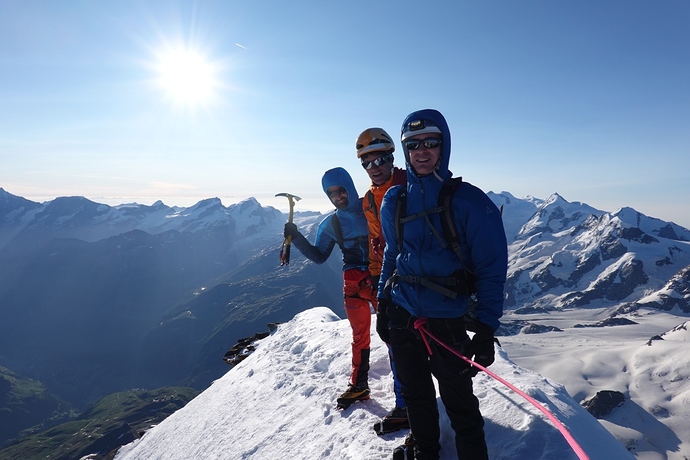 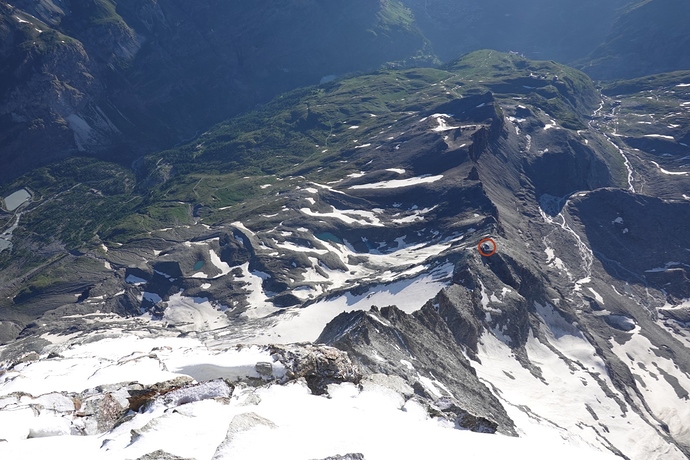 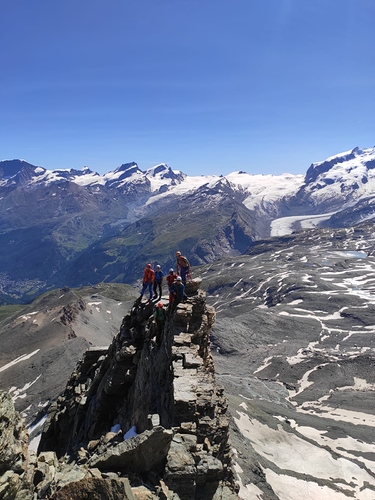 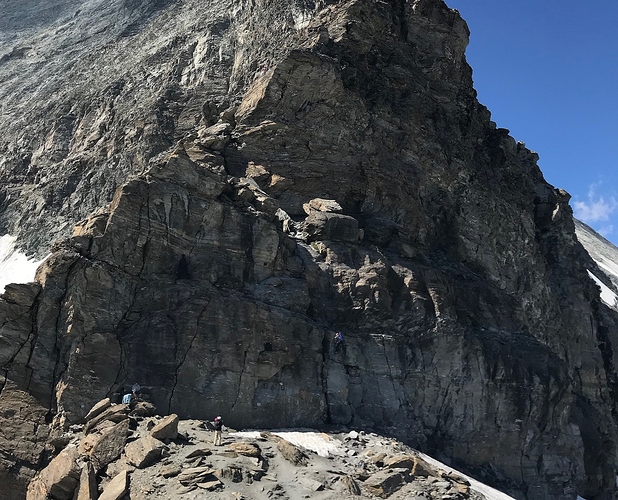 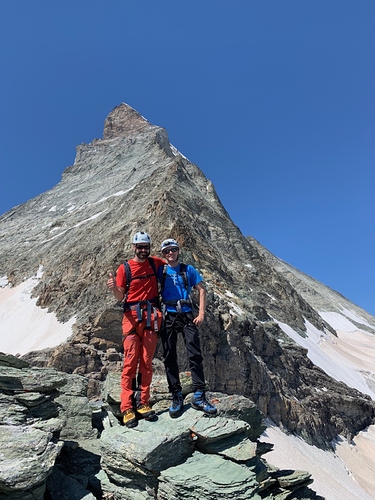 Congratulations, just great. We are glad you got down safely as well.

Oh, this is great, thanks again for taking us with you. And thanks for being wise and taking a guide. And tacitus to the last line of Fritz . . . use your time for something joyful . . .

@HB9DQM
Hey Manuel. I’d really like to know what the guide said when he saw your radio equipment and antenna. Did you tell him before?
Climbing and activating Matterhorn is a double ego trip

But Matterhorn is really a beautiful mountain and I think hardly every alpinist wants to climb it once in his life. And if you are an alpinist and a radio amateur, so why not activating it …
As you already said, it’s no real fun to do an activation on technically difficult mountains. It’s not always possible and reasonable there to share emotions and concentration with our ham radio hobby. In my case there’s also often a limited amount of understanding from my climbing partners for my second hobby.
If it is really possible for us to climb Matterhorn, I will not do an activation. I’ll bring my UHF handset as always when I’m in the mountains and I will call CQ just If I feel like to do so.

What I’d really love to do would be an overnight stay on a 4000 m peak and having several hours in the tent doing as many QSOs as you want to do. That would require perfect weather without any risk for thunderstorms and low winds and of course the willingness to carry all the stuff up the mountain. Anybody interested?

This is a new chapter on the Sota program, difficult summits. I am glad to ear everything went well.