On Sunday,11th April, I hiked up to JA/AT-018 Mt.Daibutsudake. Snow remained there and I had to walk along the abandoned road for 3 hours to the mountain foot. 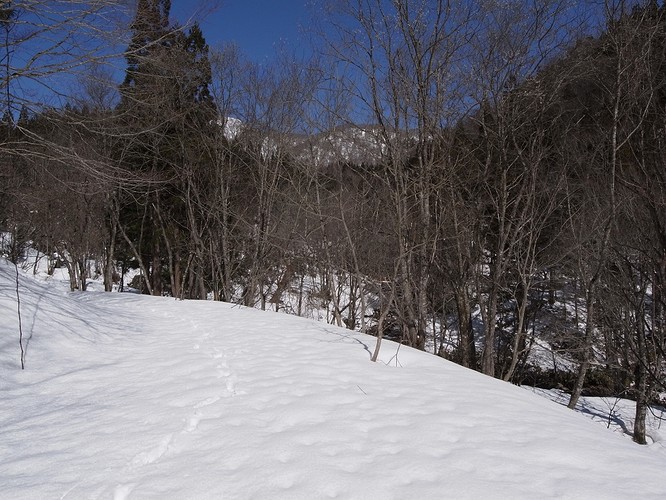 It took me 3 more hours to the mountain top from there as I had to find good crossing points over two small rivers.(busy and no photos,sorry) 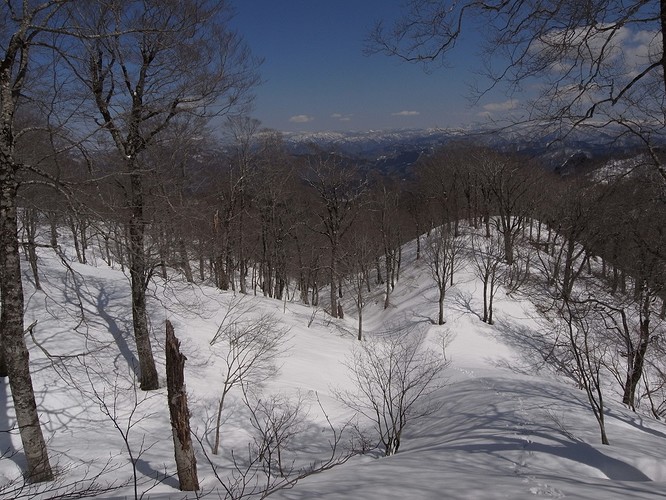 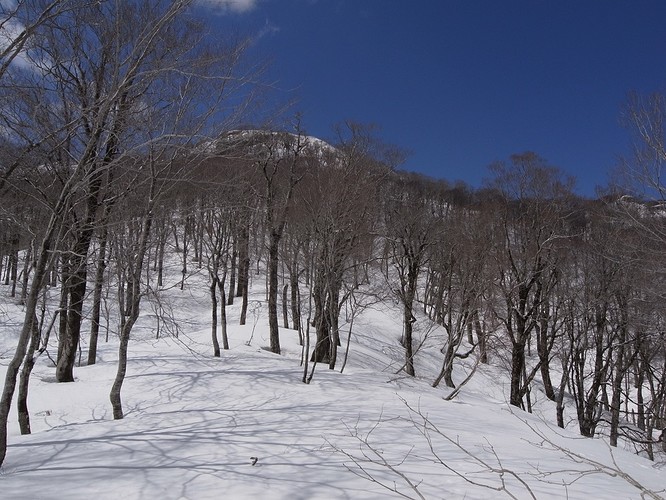 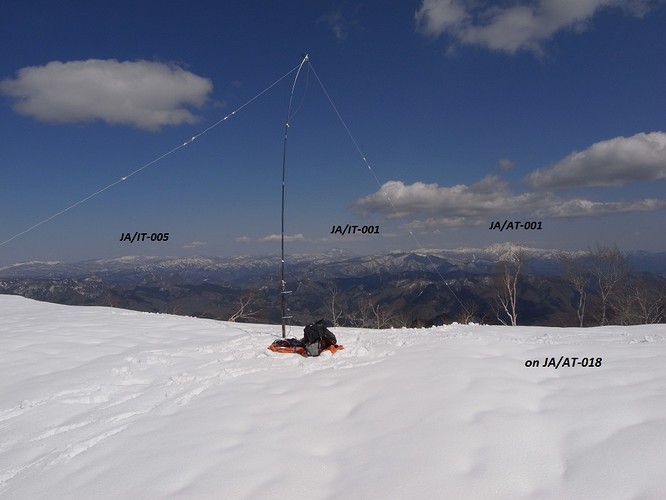 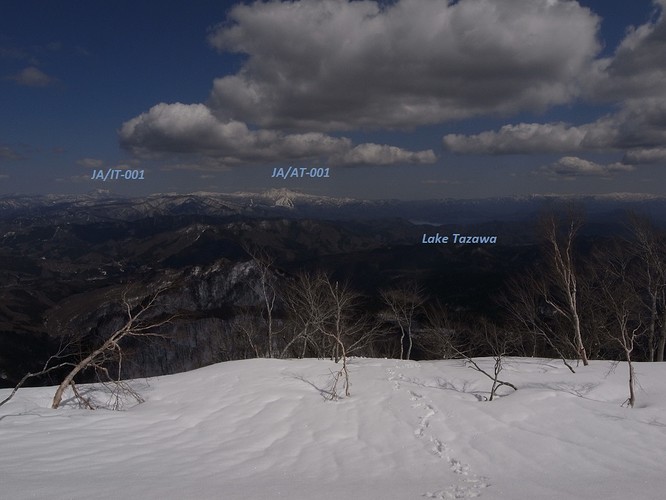 On my way back,I put on my crampons as I felt that the snow became unstable and slippy on the steep face. 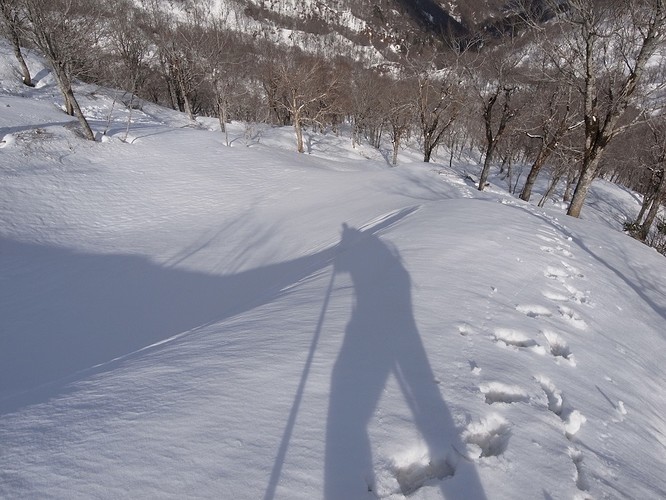 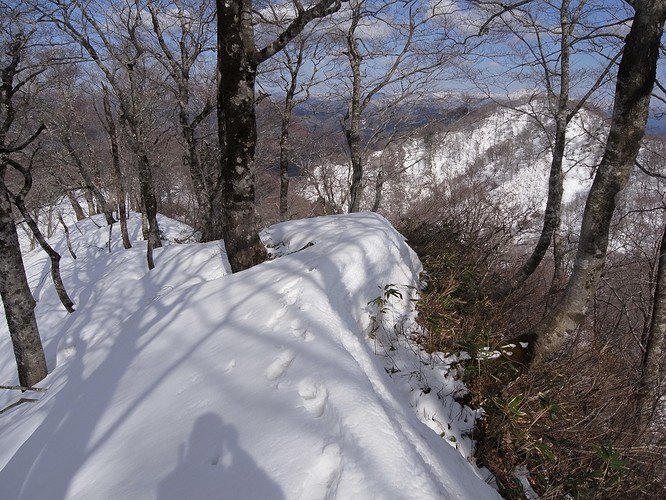 With crampons I could walk fast and easy, so I kept on walking with crampons on to the crossing point over the small rivers.(no photos)

After I had crossed the last small river, when I made a few kick-steps on the snow wall, the wall collapsed all of a sudden. I felt my left crampon hit my right leg.
As soon as I crawled up on the snow wall,I rolled up my pant and found that my sock was red with blood. Even though the Rolling Stones’ “Let it bleed” is one of my favorite albums,I couldn’t leave it this time.The wound was about 5~6cm wide and deep enough to see the muscle.
So I checked that the scar was not dirty and put on the Hydrocolloid plaster, and tied up with my towel firmly. Very slowly I stood up and checked that my right leg was movable. I was sure of my victory to myself at this point because I have read the story about Doug Scott who climed on The Ogre in 1977 and broke both ankles at over 7000m. He crawled on his hands and knees all the week-long descent to the base camp alive.
It took me an hour to the mountain foot point and 3 more hours walk along the snowy mountain road in the dark to my car.There are a lot of bears in this area but as I was screaming with pain every 2 minuites,I could keep animals away.
Thanks to the Hydrocolloid plaster,I could stand 2 more hours’ drive home with little pain.
And thanks to Doug Scott and Chris Bonington, of course. 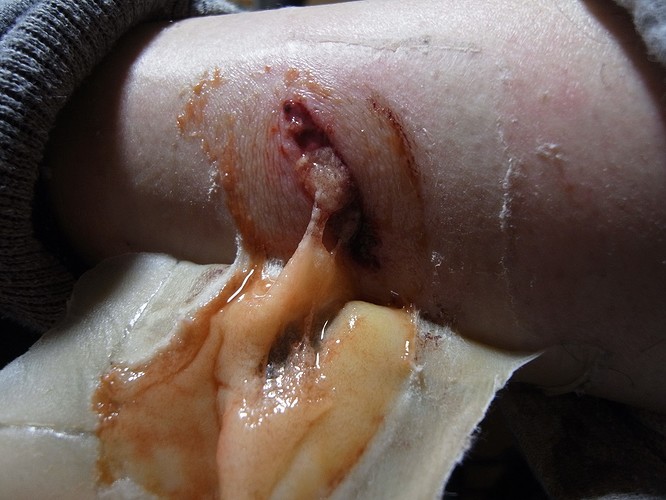 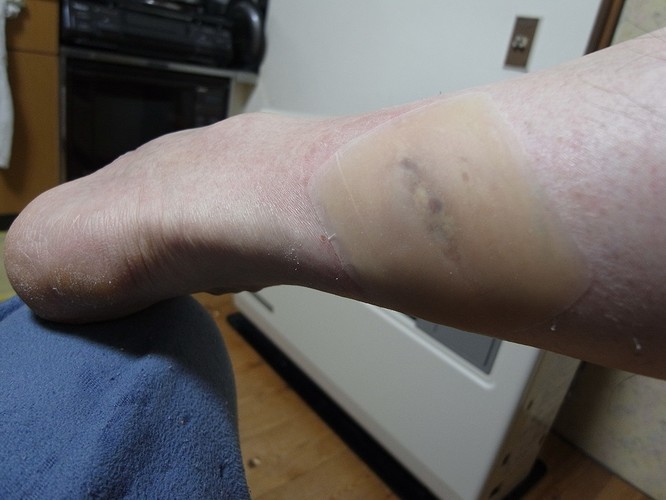 Good to hear you are recovering Atsu.

Fortunately the only victim of my crampons so far is a pair of trousers which were ripped apart. Only minor scratches on the leg itself.

Just out of curiosity, should I make it to Japan one time: which number do you have to call for a search&rescue team to get you? (Referring also to the video from K6ARK and the funny mountain runner guy: Wilderness & Mountain Safety For Activators

Thanks for the reply Daniel , and Oh yes,
quite agree with you.I feel I was lucky though.

I’ll be back soon,Andy.
Thanks.
Atsu

Thanks to the Hydrocolloid plaster,I could stand 2 more hours’ drive home with little pain.

Crampons could be danger sometimes.
I see you were well equiped to help youself - chapeau bas !
How about sewing? Can you stay without it ?
I wish you prompt recovering !

Hello Atsu-san,
Wow…what an adventure my friend! The climb you did looks very nice and beautiful pictures. I’m glad you were prepared to deal with your injury…not all activators are prepared to deal with medical issues in the field. I’ve only put holes in my gaiters or pants with my crampons. Lucky I guess! I might add Hydrocolloid plaster to my first-aid kit as it looks like it did a great job on your wound.

What a story, Atsu-san,
Very well done on having the Hydrocolloid plaster with you and also with overcoming the shock of the injure, applying first aid to yourself and getting back safe and sound.
I’ve never used crampons myself and I’ll keep your story in mind for the future in case I decide to use them some time.
Thanks for the report.
73,

Hi Jarek,
Hidrocolloid plaster works well and the wound is getting better without suture.
I cleaned the wound and changed the plaster twice, took antibiotics for three days.
Thanks and good luck, Jarek.

Thanks for the reply and kind words.
Looking forward to seeing you on the air soon!

Hi Olaf,
I’m just a person helped by a brave man’s story.
My friend gave me the prescription and I took antibiotics for three days,that’s it.
Stay healthy and thanks.

Hi Brad san,
Thank you for the kind words,I’m OK now.
Yes,I really recommend to have this stuff for emergency use,blisters,etc.
And taping tapes may be useful as well.

WOW! What a story. I’m Glad you made it back OK
and that Hydrocolloid plaster must work great your
wound healed very fast!
When I first read Injured by a crampon I said what the heck is a crampon? so I went to Wiki and found out what it meant Hi Hi, Being a city boy from Newark,NJ there was no hiking there!
73 Take Care
Gary

Now you know the whole story .
It’s a kind of embarrassing story to me but I want to report how the hydrocolloid plaster worked on such a case.
Thanks and CU!

Thanks Atsu,
Good story of self-reliance, and well documented. Good time to review first-aid kit with where one is going and what equipment will be in use.

Hi Guru san,
Thanks for the kind reply.
I always wear thick long(knee-high) socks and it helped me holding the tied towel inside and add some pressure on it.
In summer when it is too hot I roll them down,but long socks are good against bush wound or insect bites in my area.
Stay healthy,Guru san.

What a story Atsu-san.
Btw I have edited the title because I was a bit shocked seen the picture while scrolling down the article.

I hope that there are no late side-effects.
Usually a Tetanus injection is done in such a case. https://en.wikipedia.org/wiki/Tetanus
https://ja.wikipedia.org/wiki/破傷風
Incubation times can be weeks or month. And I guess antibiotics will not help to prevent that. But I am no medical expert either.

Please take care and all the best for a full recovery.
73 de Joe
also JJ1FJK