Newish to ham radio, I’m an ex Royal Navy Radio Operator, but that was back in the sixties and seventies. Discovered ham a year or two ago. I’m really only interested in CW and as I’m a keen hillwalker and mountaineer SOTA sounds fun.

<My 1st outing today with Pete Freeman M0MHO and were off to ?? I forget now Whernside? Ingleborough? Anyway I’ll be on CW only and hopefully I won’t make too many mistakes.

Oh, I’m also a tour-guide and a Drystone Waller/hedgelayer.

G0FEX
Hi David
Welcome to the world of Sota, I am sure you will really enjoy the activity , still working on my cw here.
Cheers Ken

Robin hood’s bay is a great part of the country. Some Sota summits not too far from yourself.
I’m trying to learn CW, or should i say, trying to make time and commit to it every day. I am learning slowly.
Welcome to Sota as other people say it’s very addictive.
73
Anthony

I’m Phil and live in Pickering, quite close to Pete M0HQO who you are activating with on Whernside today. I am a SOTA activator and a chaser myself. Great to hear you are a keen CW man and with your outdoor interests it will be great for you to combine several hobbies into one with SOTA. I hope to meet you soon.

I hope you & Pete have a successful day on Whernside. I live in Scarborough & regulary activate in the North Pennines & Lake District, mostly with Dave G3TQQ. You are welcome to join us, Pete has our details.

nice to have a qso with you some minuts ago, tks.

Welcome to the SOTA world, you will not regret it. I am David too and I am a 100 % cw operator.

Have a nice weekend.

Very pleased to work you on your first activation from the prom at Blackpool. Nice to work Pete who was with you & will be coming to the Blackpool rally tomorrow with Roy,Nick, & Dave.

I hope to work you on CW st some point but our 145MHz FM QSO will do for now. 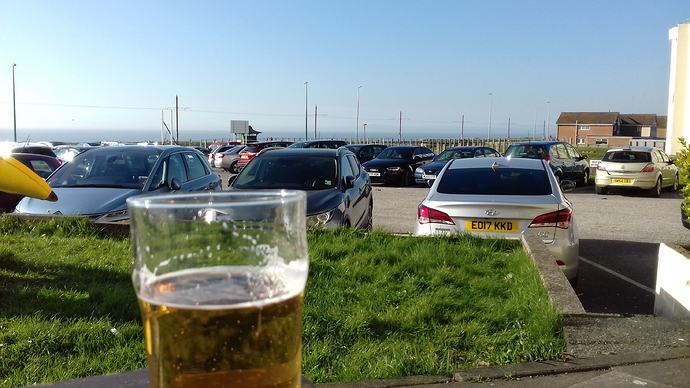 (Currently sat outside in the sunshine with a beer looking across to Black Combe I think, from Norbreck)

Thank you very much guys. Excellent day out with Pete fm Pickering for whom I’m extremely grateful (his c/s is of course not the one in my 1st post.)

As you may know the weather was perfect. Sunny and almost no wind at the top. And I’ve never been to the top of whernside either. and as a bonus point for me I worked my 1st USA station on cw, along with my 1st Portuguese station CT1DRB (thanks David!)/ and as my You Kits HB1-1b only pushes out 5watts I’m well pleased with that.

I’ve not used voice at all as an ham - so apologies if my procedure wasn’t up to scratch but it was great fun and especially pleased with getting you, especially as we got G0VOF?P on 2meters in Blackpool and we also got G0PEK/m and his son M6HLR/m calling from just outside Hull which is 84 miles.

For a CW only operator until today you did extremely well

To keep things simple I signed G0VOF/P from the prom, I was tempted to send some “voice morse” in case you needed to be on familiar ground but that was’t necessary.

You will find that 5 Watts is plenty for SOTA activating.

A warm welcome to you David!

Despite what others may say, it’s a proven fact that CW is THE mode for SOTA! You are in a perfect position to hit the ground running and do some great SOTA activations.

The HB1B is a good rig for SOTA - nice and simple, easy to pack and 5 watts is more than enough.

Today I was running around 3w from an experimental rig designed by the man behind the famous RockMite CW rig, Dave, K1SWL. I worked 3 US stations on 20m with a home brew dipole at 11ft above the ground on Red Screes G/LD-017.

I hope we can work at some point in the future.

Welcome to Ham Radio and SOTA.
I’m an ex Merchant Navy R/O, and mainly using CW.
I live in Scarborough. You will find quite a few interested in SOTA in the area.
Welcome.