INTRODUCTION:
This was Day-1 of our annual six-night break in the Lake District with the walking group. There were only three walkers including myself this year. Three wives came along, of whom two were non walking. Exceptionally, Christine who is completely blind due to MS, climbed with Rob from Keswick to the top of Latrigg (368m) and back the day before we arrived.

Walk leader David had kindly this walk with me in mind. With a SOTA on offer, I took no persuading. I gave him one of my UV-3R’s, set to PMR should we need it.

Route:
We took the path from Comb Beck Bridge at NY 3488 2722, where there is space to park about eight cars. The Sharpe Edge route also starts here. In fact it’s the paths up as far as Scales Tarn.

Execution:
We left the car at 09:49 to walk slowly up. With just one summit to do and plenty of time, the usual rushing about wasn’t required. We met a few people on the way and some had dogs with them. One particular Lurcher grabbed my attention. Disappointingly there was low-cloud at the summit and this never did clear for the whole time I was there.

I walked ahead to erect the antenna system on sloping grass at NY 3243 2780, after which the others joined me for lunch. In my case that consisted of two choc. bars but the lads were armed with their usual ‘doorsteps’ from the sandwich shop in Keswick.

3.557 CW - 4 QSO’s:
By now my lunch companions left for the car park. Frank G3RMD must have been monitoring. When I called CQ within five minutes of the alerted time, he came straight back but no others followed. After alerting Roy by phone, I got G4SSH in the log followed by Gordon G4FGJ and finally Nick G4OOE in Scarborough.

After a brief chat with Phil I worked G3RMD; M0HQO (Pete in Pickering and fellow SARS member), G3YPE; G0ELJ; GM0IQ and finally G0GWY. Power was set to 30 Watts and signals were a lot stronger than on 80m. This band was doing a great job of carrying inter-G comms at excellent signal strengths and that’s getting rarer these days. Apart from an ‘52’ coming back from Spain, most reports were 57 to 59 with a few at 59 plus.

14.052.6 CW – 12 QSO’s:
With 40m favouring UK stations, I hoped that 20 might satisfy some of the Europeans but who should come back to my CQ but my friend in Scarborough G4SSH. Roy is only about 100 miles away from LD8 but we exchanged with a genuine 599/ 579! Granted, there was QSB but I didn’t expect that to happen. After recovering from the shock, I went on to work: OE7PHI Hans; DL1FU Frid; G0TDM John; G0FVH; DL6FAX Konrad; SP9AMH Maruisz and IK2LEY Fabio.

The next caller caused me all kinds of difficulty. His signal was very strong but his Morse code abilities were not. In fact there were dot dash combinations that I’ve never hear of before. For the next ten minutes (no exaggeration) I struggled to read a single letter. I was embarrassed because I couldn’t even copy a consistent callsign. At one time I thought it was a GB station, another time an FA6. Over after over was tried until finally I got the impression that he thought he’d worked me and a badly mangled ‘73’ was sent along with my name. I was relieved it was all over; it certainly made me sweat and my ears were ringing.

Now back to normality, we finished with: RW3XZ; PA9B Rob and M0BKV Damien. Power was 30 Watts. Almost everybody got 59 from me and four 59’s came back. The remainder were in the range 549 to 579 with a 519 from Italy and a 339 from Polska. The session took 27 minutes from 13:45z but over a third of that was wasted in a futile attempt to log that single station.

70.450 FM - 3 QSO’s:
Standing up with the IC-E90 held high, I logged John G0TDM, John MW1FGQ and Geoff G4WHA/A on 4fm using 3 Watts to an extended 2m band rubber duck. All reports were 59 other than the one received from Holyhead which was 44. Nothing further was heard and a CQ went unanswered. Time to go.

Descent:
Now solo, I elected to take the easiest way down which was via Scales Fell but there were no views until well after the tarn. In fact the cloud level was now down to 600m. My GPS route goes was back to the A66 layby so instead of turning right at NY 3449 2737, I went straight down beside a fence to meet the main path at NY 3471 2737, turning right there. The car was reached in 47 minutes at 17:13.

A Casualty:
In the car park a distressing sight awaited me. A lady had come off her bicycle and she said that her hip was ‘clicking.’ She was certainly looking a bit battered and bruised with a few cuts to the legs also. Fortunately her husband was with her but he was preparing to set off on a one-hour bike ride to a caravan they were staying in some miles to the east. They were from the Midlands.

She was helped into a sitting position and I offered to take them both if the bikes could be chained to the fence. The poor girl could hardly move and was just about incapable of getting into the car. She didn’t want a fuss, asking if I knew of a non emergency number they could phone. She was reluctant but between us we gradually talked her into calling an ambulance, the argument being that she’d need A&E whatever happened.

Mobile signals were poor to non-existent so in the interim, her husband had ridden to the pub and called from there. In fact I passed the ambulance five minutes later, coming east along the A66 with all lights and sirens going.

Hopefully it wasn’t too serious but it would certainly ruin their day and the coming days too. Ironically, they were returning from a ride into Keswick to buy some walking socks for a mountain ascent the following day. No doubt that would have been cancelled.

Comments:
This was the first day of walking and a good way to ease into it. Unless there’s loads to do, it’s much more pleasant to walk with the group. In fact this year a point was stretched even calling it a group. I can’t remember a year since 2002 when there were only three of us.

It’s not the time of year to be slogging up hills as fast as humanly possible and it’s all too easy to fall into that trap when there’s no one to distract you. A nice conversation, interspersed with looking at the map, was just what was required.

Working a distance of 100 miles with good reports on all three bands, 80, 40 & 20m, was a rare thing but it happened today and Geoff G4WHA/A made it through on these three plus the two VHF bands.

The WX was good in the sense that there was no rain and little wind but constant low-cloud spoiled the views and most of the photos. Flies were a problem but not to the extent that a head net was required, as has been the case here in the past. 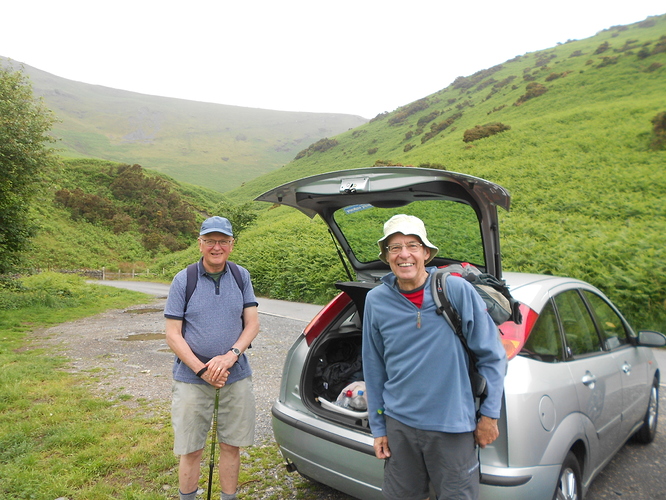 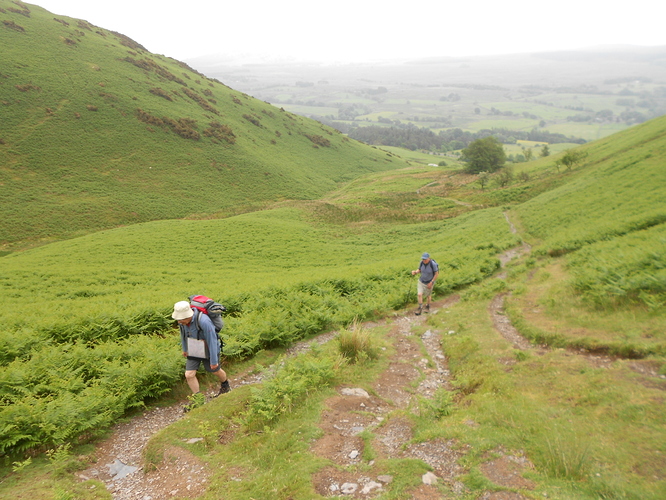 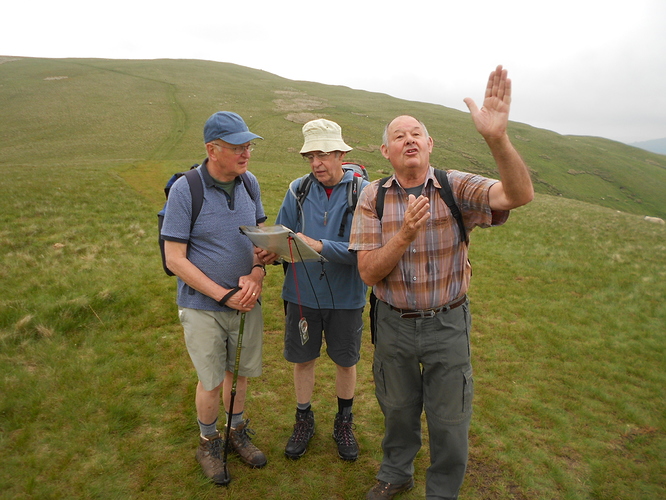 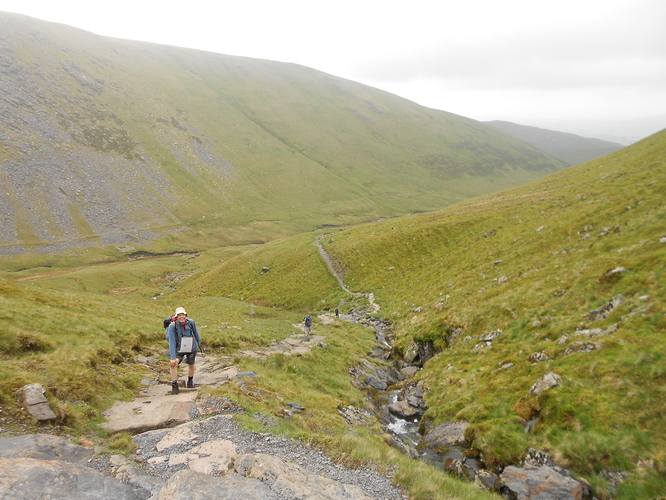 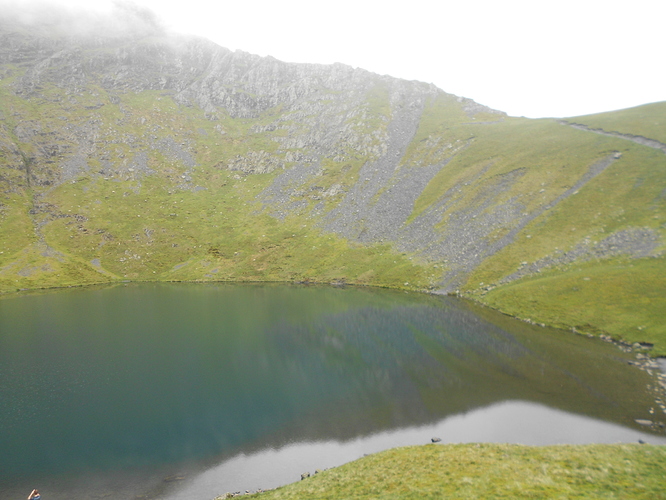 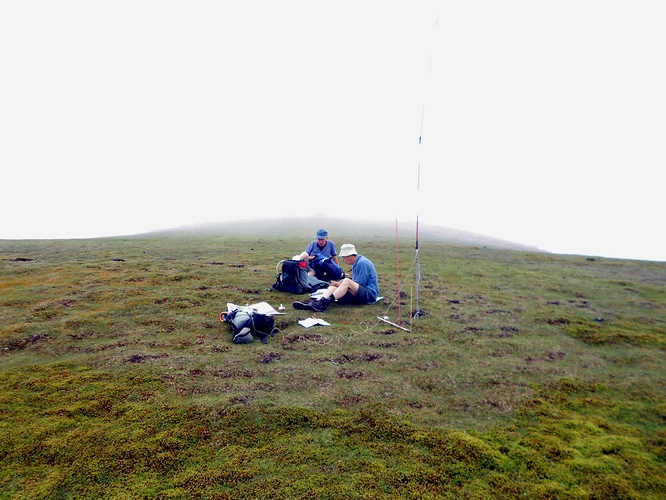 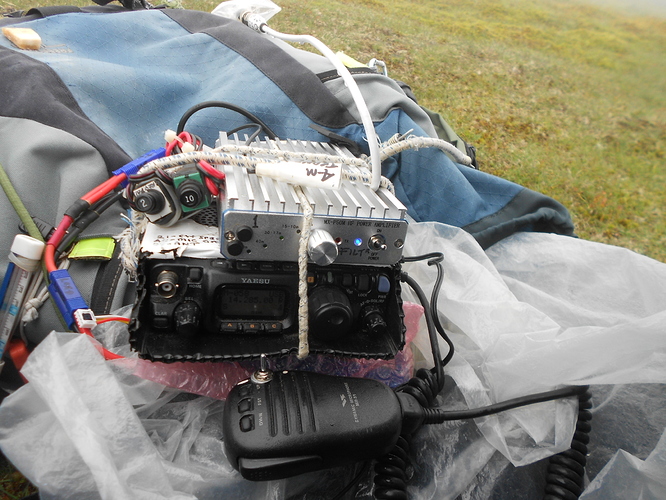 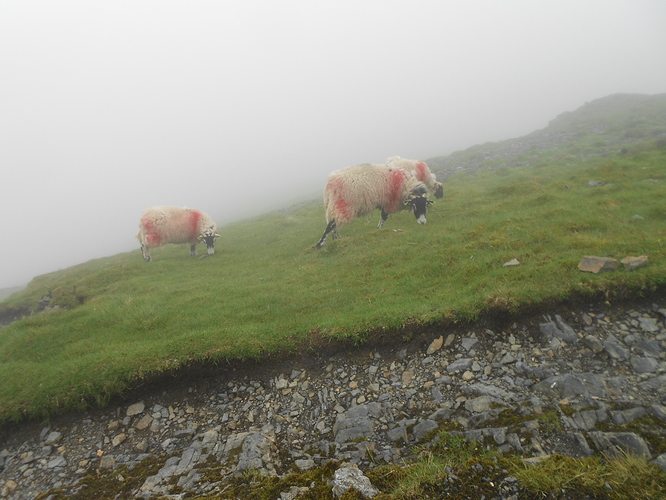 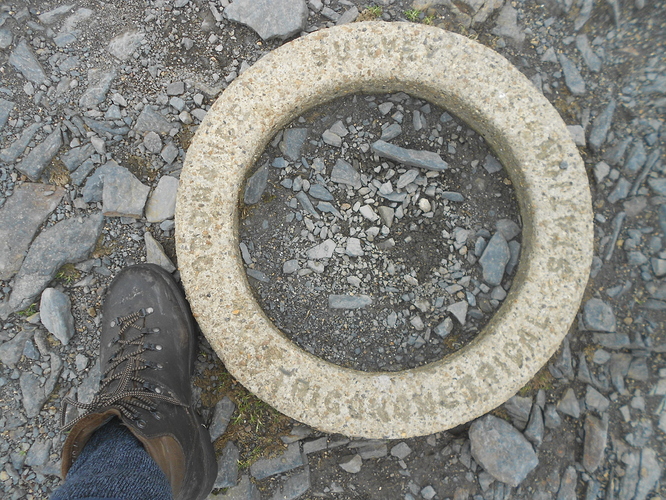 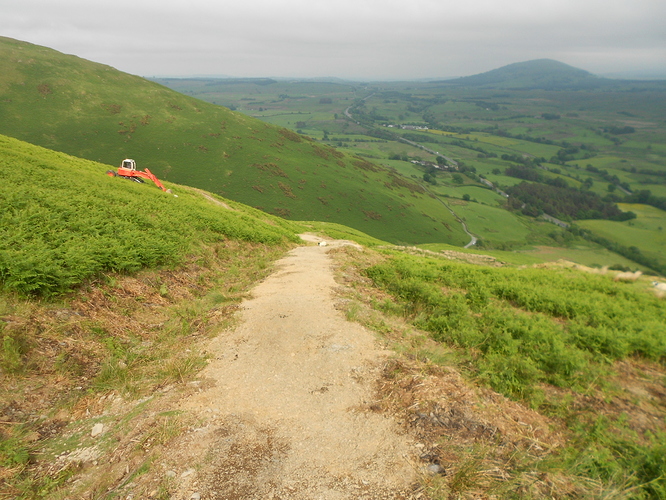 Thanks John, another fine report. Congratulations to Christine and Rob.
With regard to the first aid incident, I can recommend the Minor injuries unit at Keswick from personal experience involving a bike on the C2C 2 years ago. No queue when I went (v rare for those not used to NHS A&E) but not open 24hrs

Yes, I remember taking David - walk leader there when he cracked a bone in his ankle 2-years ago. They were really good with him but there was talk of closure. Hope not. 73, John

G0FEX
Hi John
Cracking photo’s from the lakes, always a pleasure to make the contact with you, one day we will have an S2S.
Cheers Ken

Hi Ken,
Yes, that would be good.

I’m afraid the Blencathra photos weren’t that cracking due to hill fog at the summit but the rest of the week you may like better when I finally bottom these reports.

Thanks. John.
Back to work!