INTRODUCTION:
This was Day-3 of our annual ‘Lakes Week’ holiday; a six night stay in Keswick. This year we were down to three couples and only three serious walkers. Our walk leader David did mention a sortie onto Nethermost Pike earlier in the week but instead they went for an easier walk on Watermillock Common, over by Ullswater.

The drive down from Keswick took around 20 minutes. Just after arriving I heard what I initially assumed to be a large truck coming up the A591. This was no road vehicle but an RAF Lockheed Hercules in olive drab, flying north at what must have been no more than the minimum allowable 250 feet. What a magnificent sight and sound. The roaring of four turboprops and it’s track was directly over the road which was no more than 30m from where I and another couple of speechless walkers, were standing. I should have been quicker with the camera. The shot I took does not have anything but trees and the car park in it. That’s digital cameras for you. There’s no rushing them. An old fashioned 35mm might just have captured it.

Parking at Wythburn Church:
I’m pleased to say that this Pay and Display car park is still free. A notice states:

‘FREE PARKING UNTIL FURTHER NOTICE.’ ‘Thank you for your patience during a period of recovery from Storm Desmond.’ It goes on to mention damaged footpaths and infrastructure which might affect walkers around the Thirlmere district due to closures etc. Nothing like that was encountered today, though I did notice that contractors are still working beside the A591 north of Swirls.

Route:
The path leaves the car park (NY 3244 1362) via a gate in the NE corner and passes initially through trees to cross a track junction at NY 3269 1363. The trees, some of which have been felled, are left behind at around NY 3282 1353 and the easy-to-follow path becomes paved a little higher up. After that it’s gravely.

From there the Helvellyn shelter can be seen; provided it isn’t misty. If you carry a DAB radio, it cuts-in as you rise through 500m ASL at around NY 3329 1352 but today I was using an MP3 Player. A few feet of altitude are lost, just before the top junction.

Leaving the car park at 10:13, the climb took 1hr-25 minutes which was longer than usual considering the non-winter conditions.

Setting up:
Today I climbed in overcast and on arrival, the summit area was affected by whispy low-cloud. I set up on the flat surface north of the trig point and a short distance away from the path on its Thirlmere (west) side. I knew there would be a steady stream of passers-by there and a cool breeze but it was the best place. For obvious reasons in summer, I didn’t want to set up at the shelter and the eastern lip position I have used a time or two in the past. It was exposed to a damp updraught at the time not top mention the potential for equipment rolling down hundreds of feet.

Like on Skiddaw the day before, I found just enough soil between the small stones, to get the mast and end sticks securely in. In fact the surface, which often looks like bare shale, seemed to be supporting the growth of more than the usual amount of grass, albeit stunted.

7.160 SSB - 25 QSO’s:
Despite this being close to the bottom of the sunspot cycle , the 40m band proved itself a good inter-G supporter for the third day running, whilst at the same time bringing in stations from the continent in equal numbers.

Power was 30 Watts but signals were somewhat down on the days previous. Half the chasers were handed a 59. The rest were between 55 and 57 to me, apart from some difficult ones, for example: SP5DZH 33/ 55 and G4WHA/A Geoff who gave me a 36. It wasn’t surprising that the more distant stations were struggling with my signal in QSB and I got between between 22 and 44 from Spain and Italy. Quite a few of the G’s were only copying me at R4.

14.052.6 CW – 10 QSO’s:
Roy G4SSH pre-announced this in the notes of an earlier spot. As the phone was working I also self spotted it just beforehand. Unfortunately I got the mode wrong – PSK instead of CW. Luckily Roy noticed my error and corrected it with another spot a few minutes later.

Power was 30 Watts for the first three, then 50 Watts. The session took half an hour but that included a short but unsuccessful QSY to 14.285 SSB between QSO’s with OK1AY and CT1BQH. There were plenty of CQ’s and chasers came in at a dribble. I have little idea of what it’s really like to be a chaser but maybe the bands were busy and they had a lot to process. I have written this before but I firmly believe that for a number of reasons, chasers have a far harder job from the radio viewpoint than activators.

14.285 SSB – Nil:
This was in the middle of two 20m CW sessions and I advertised it in the notes of my 14.052.6 CW self spot but 50 Watt CQ’s produced no QSO’s. Looking at my log I can see that perhaps Lars SA4BLM may have called in. I have reports of 55 both ways but the pencilled QSO is crossed out in ink and the note ‘nil’ appended. Maybe we nearly made it but the QSO wasn’t satisfactory? Unless I discover otherwise, the detail is lost in the mists of time. Fortunately Lars was successful in CW a little later.

Visitors:
After early low-cloud, the sun came out in a determined manner and Helvellyn got very busy. Many of the walkers became sunbathers. In fact at one point in the early afternoon the summit reminded me of Scarborough beach with people layed around for extended periods. This was somewhat surreal compared with my last activation of Helvellyn in December 2017. Then there was freezing fog, snow and ice and I met the mountaineer Alan Hinkes complete with ice axe.

Today I lost count of the number of walkers who came off the path to ask me what it was all about. I always try my best to explain, even if I have to QRX the activation, as I think it’s important for good relations. In over 16 years of SOTA activating and mountain radio before that, I have yet to receive my first adverse comment.

One lady came across to tell me that her Grandfather had been, ‘One of the first radio amateurs.’ I mentioned ‘G2’ as a possible callsign and she recalled that but didn’t know the suffix. She thought that the mast was the aerial and the wires were there merely to support it.

Another young woman expressed far more than the usual level of interest and asked a succession of questions. People are often curious of what range can be achieved and this lady was no exception. However, she wanted to know more about how it was possible to reach so far with so little, if the weather affected it and where the ionosphere was after I mentioned it. In fact this was a real propagation lesson and I was only too pleased to explain as best I could.

A photo resulted with me saying, ‘I’ll put you in my internet report.’ She asked my name and where the report could be found, so I gave her the sotawatch particulars. She introduced herself as Emma, telling me that her friend had offered to look after her daughter for the day so she could go off walking. Apparently she didn’t wait to be asked twice, choosing the Helvellyn round from Glenridding, returning via Dollywaggon Pike, Grisedale Beck and Patterdale; a fair undertaking but on a perfect day for walking. Maybe Emma will find this writeup.

Paraglider:
In such benign conditions, it didn’t take long to pack up the station and be off but before leaving, there was a sight to see. A man on a paraglider was taking full advantage of a strong and steady updraught which was blowing up the east face. He was ridge soaring up and down just above summit level and sometimes just below in the tight turns he was executing. I managed to get a few photos though none of them very good, as he didn’t come as far north as the trig point.

The Descent:
This was underway at 16:40 but stops were made to take a few photos near the shelter and of the aircraft memorial plaque. Listening to music again on the way down, the car park was regained in 64 minutes at 17:44.

Comments:
This mountain was done solo and I must say, I did miss the group’s company of David and Rob, who I walked with on the previous two days.

The weather was perfect in that there wasn’t much sunshine in the morning and some low-cloud at the summit. Once the strenuous ascent was over and the activation was well underway, the mist cleared and the sun came out. Helvellyn then became a sun worshipper’s paradise, so utterly unlike anything you would experience in winter. However, there was respite if you wanted it. A cool breeze was available for those sitting overlooking Red Tarn and this was the steady updraught made use of by the paraglider.

A dozen stations were worked on 2m-FM using just 2.5 Watts which was not a bad total for a weekday. I thought I heard Dave G6LKB call in. I must have missed the prefix; this was David’s son Andrew M0LKB. Dave was in France as F/G6LKB/P and I worked him later, on 40m SSB.

Talking of 40m SSB; this was the winning band for the third day running, this time with 32 QSO’s. Conditions weren’t nearly so good however. Signal strengths were generally down and there was QSB but it did turn out to be the most reliable band for chasers.

After working Japan from Skiddaw the previous day, I had great hopes for 20m but there was not a sniff of DX this time around. However, 20m did bring in a steady stream of ten stations. Most of these were recognized SOTA chasers and all of them were worked in CW. SSB was tried but there were no takers.

The one QSO on 80m was also in CW. Roy G4SSH caught me on 3.557 but no one followed. Again, SSB was spotted but without success.

Investing no more than a couple of minutes in 4m-FM paid off again with two stations worked but these would be the last of the week. On the final two days of the holiday, I simply forgot to put on 4m and now I’m regretting it somewhat.

Setting up beside the main summit ridge path seemed to attract more attention than usual. The good weather no doubt influenced that situation and I was only too pleased to answer questions and try to be an ambassador for the hobby without overdoing it. When there’s a gulf of knowledge between people inside and those outside a hobby, any hobby, it’s all too easy to say too much or go too deep. You have to listen to what is asked then try to respond at the same level. I always thank them for their interest. 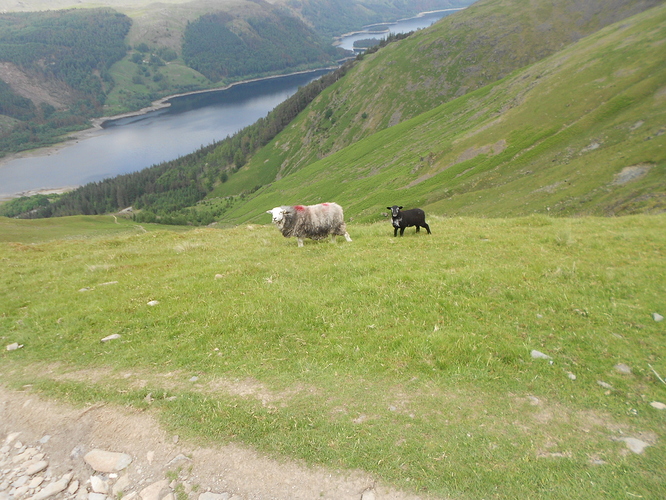 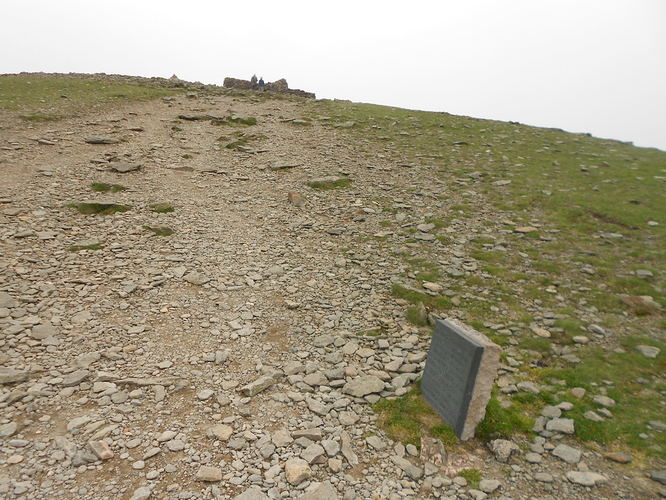 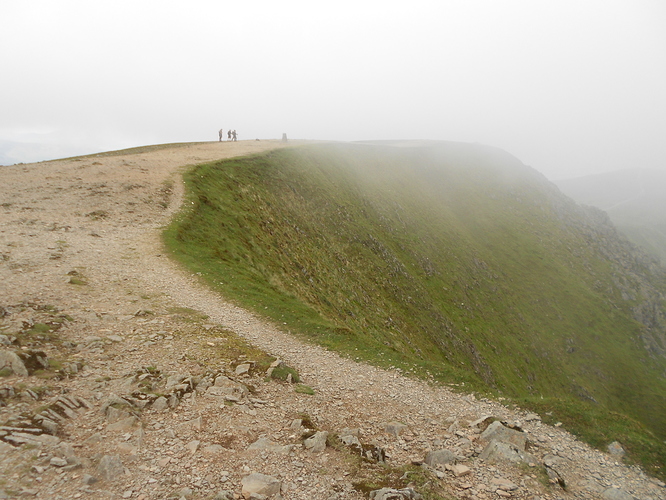 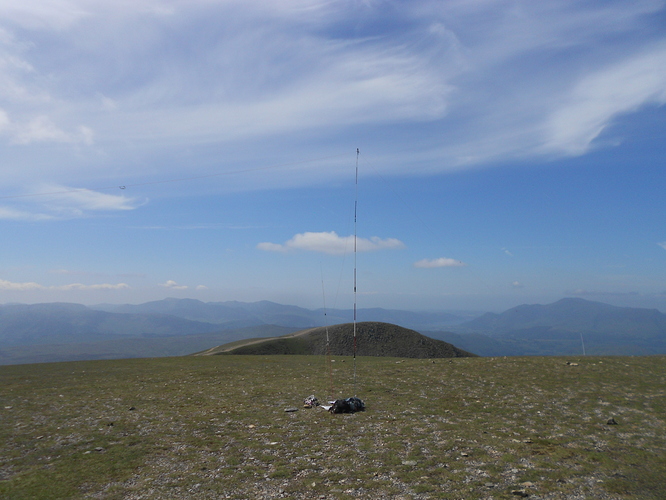 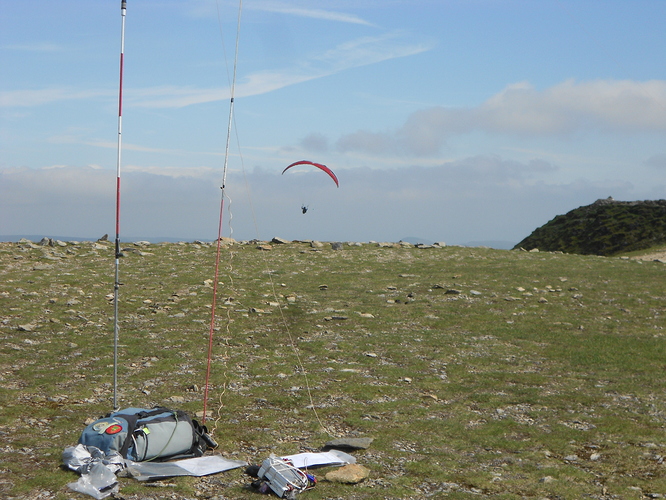 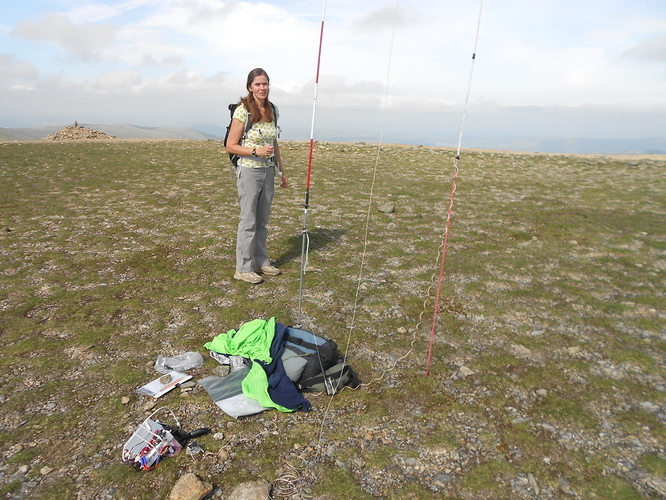 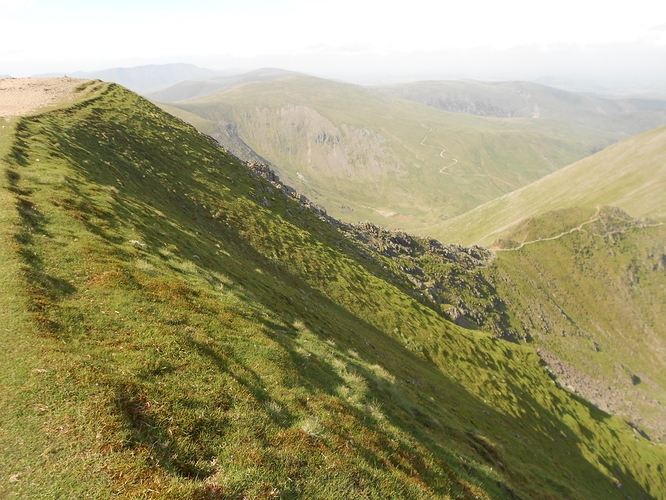 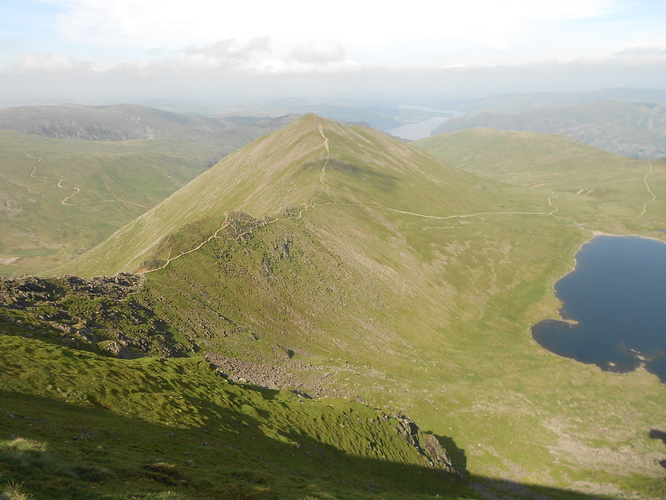 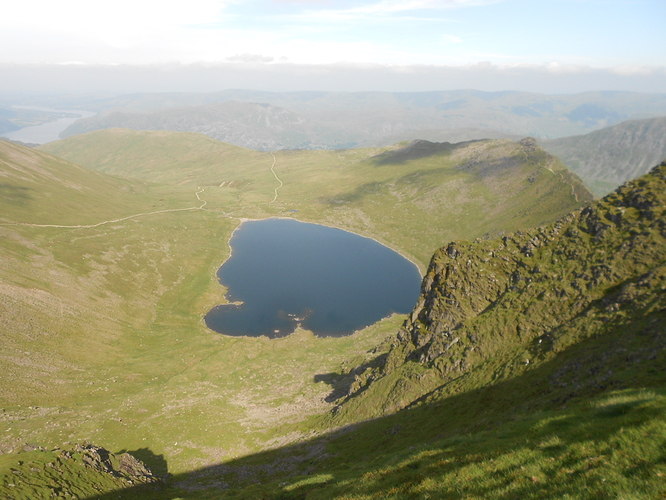 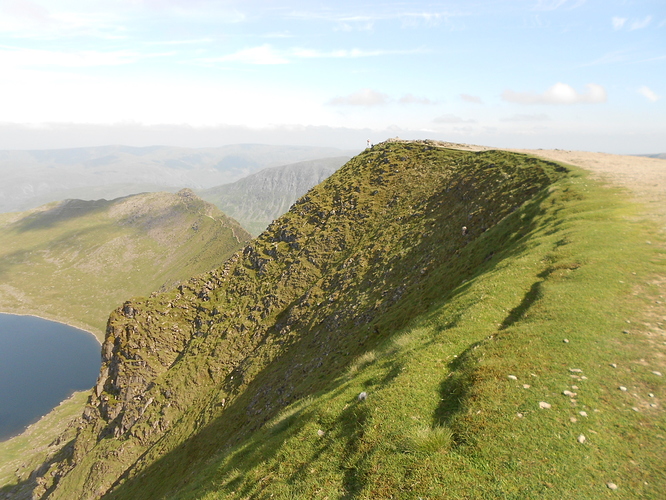 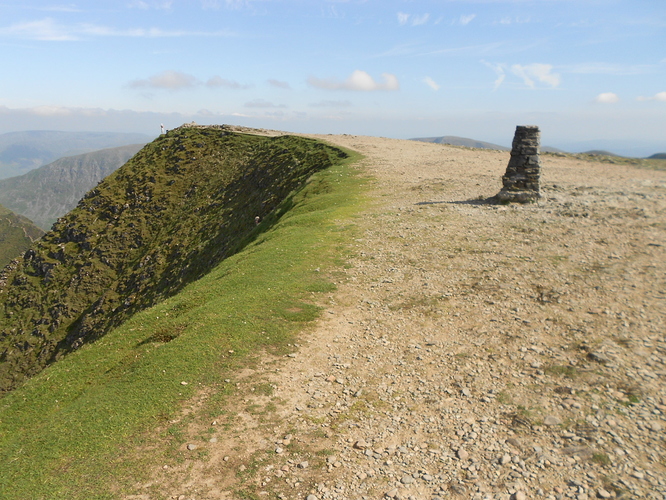 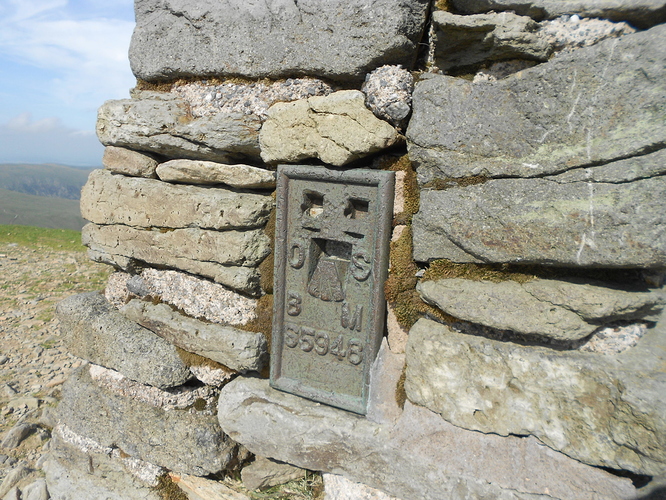 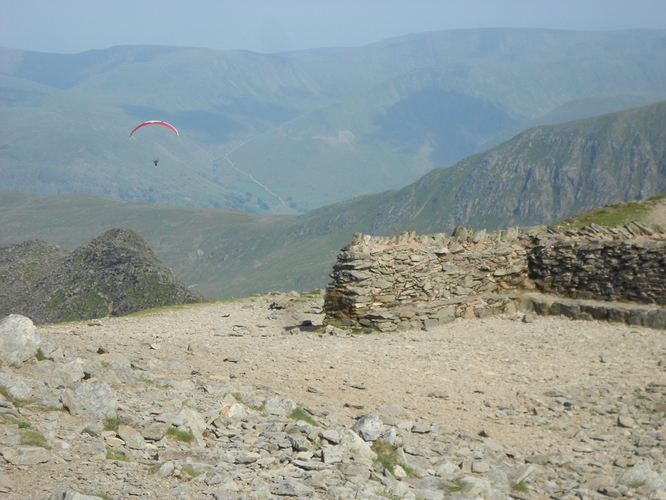 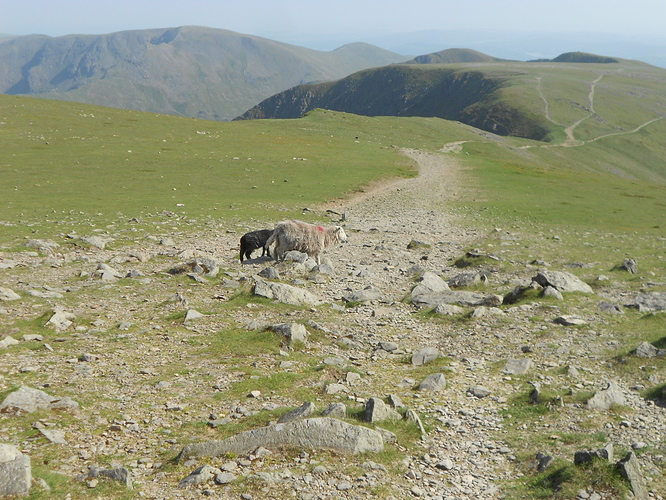 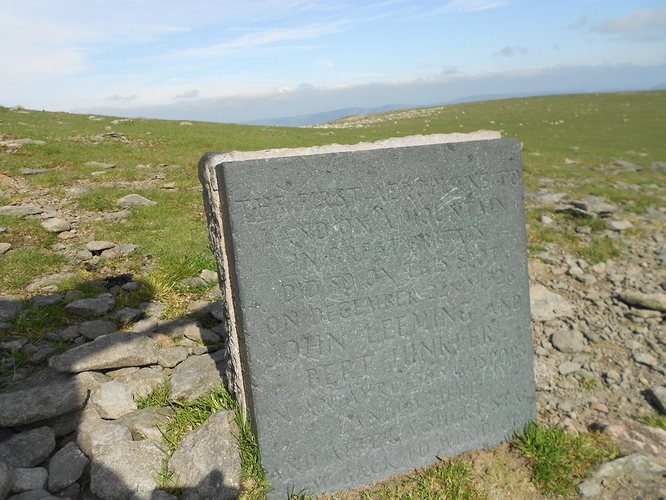 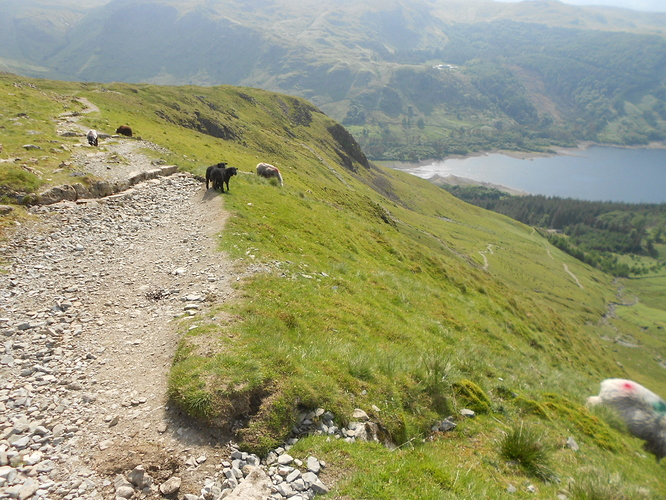 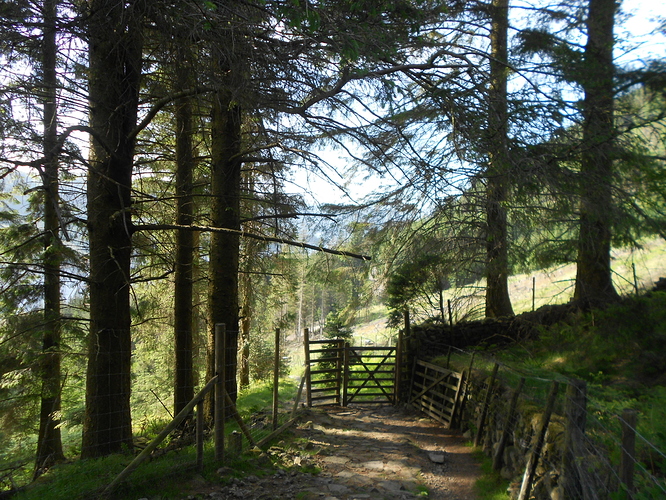