Sunday 4th March. A thaw was starting. Do I go ice-climbing again, or attempt an activation on skis? Tomorrow would be impossible to do either - too warm and not enough snow. My van had kit for both activities. So off I set from home, driving to Commondale in North Yorkshire in thick fog - I’ll decide on the way I thought.

I wasn’t going to see much ice in this weather so an activation of Gisborough ‘summit’ was on the cards.

I stopped just outside Commondale Village and got sorted for the ski in. I couldn’t see more than 100yards at the most. The first bit of the footpath onto the moors was confusing on skis and no one had walked it in the snow. Its hard to explore and search the right route in amongst new trees, and deep heather but eventually I was onto the open moor and following the tracks on the moor in wet snow which made the going a little slow. 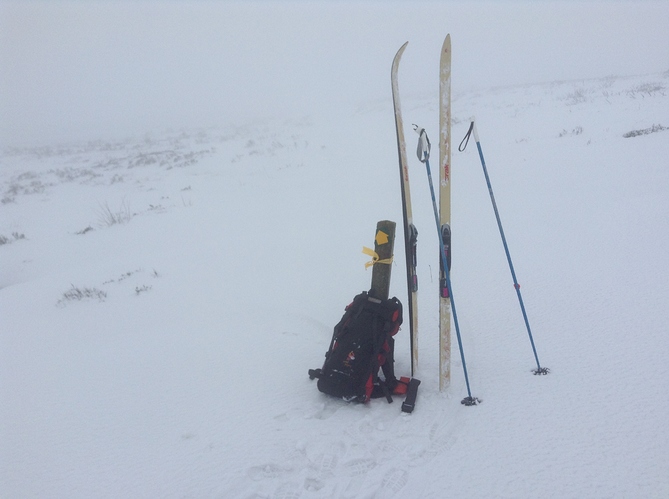 Visibility wasn’t too good either! It was a good exercise in navigation.

An hour and a half later and around 5km of skiing later I was close to the flat area which is supposed to be the summit/g/tw-003, so I skied around looking for a likely spot to get some shelter.

A small but useful drift of nice snow provided the spot. Out with the machette, cut some decent blocks of snow to make a shelter and seat from the wind. I soon had the kit sorted out and was ready to go. No need for the tarp/poncho either - I just wanted to get on the air. 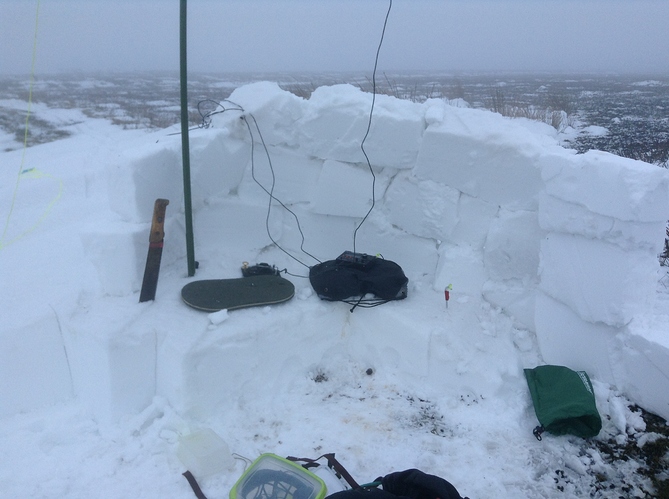 It was a bleak spot!! I spent several minutes calling CQ Sota, but no replies. All this way for nothing?? I’d not put an alert out, nor had I a phone, nor had I ever done a self spot before.

But I had my Ipad and quickly found a signal!. After a few minutes I’d worked out how to self spot. Simple! Will it work though? Bingo! Within the minute the 1st answer &, within the space of six minutes I’d had 6 QSO’s, the best for me being two Americans (K4QS & N4EX), for a couple of minutes I’d also had my 1st experience of a mini pile up.

Then it all went dead again. I’d several pairs of gloves with me but my morse fingers were getting cold and the CW was going a bit wrong, I didn’t think I’d be able to send morse in heavier gloves and mitts so I did the best with the gloves I’d kept on, but in the damp I was getting the odd spurious transmission from my HB1-B and/or morse key. And my hands were getting cooler.

I quickly wrapped the gear up and stowed everything away before I got too cold to function properly. Double checked everything was in the bag, skis on and now back to the van. It was much easier skiing back as we were on a slight down hill run but the temperature had now gone up to above freezing and the snow cover was already going.

I was soon pretty hot again 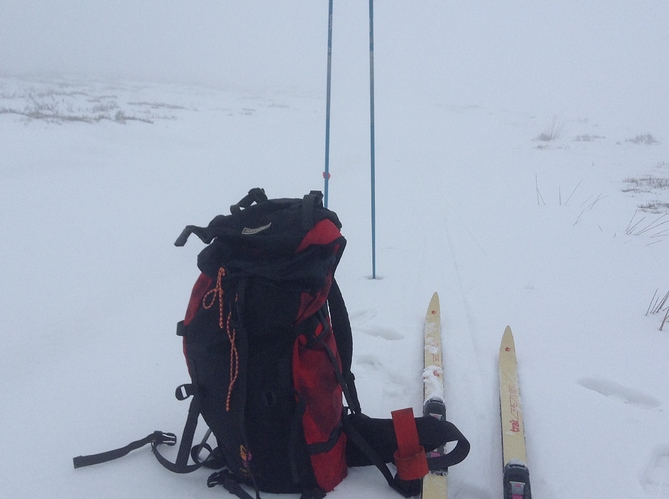 Still thick fog, but I made good time by following the tracks I’d made out, and exactly 1 hour I was back at the van and the 20 miles journey back home.

I noticed the temperature had gone from a degree below freezing to a couple of degrees warmer on the way out and I doubt they’d be enough skiable snow tomorrow.

My most interesting activation so far and all for one point!

Nice activation and snow shelter. That summit always seems to have a tricky tariffs for me. Hard to do on vhf only. Nice contacts to the U.S. in the mist.
I was sledging and making a giant snowball (5ft diameter) up gribdale Carpark. I seen the mist on the summit’s. Didn’t look nice.

It was a bit grim driving home in the murk/fog

Glad you remembered the foam pad