We’ll, 16 months after starting SOTA and 18 months after getting licensed I had my first CW QSOs (For SOTA) ! 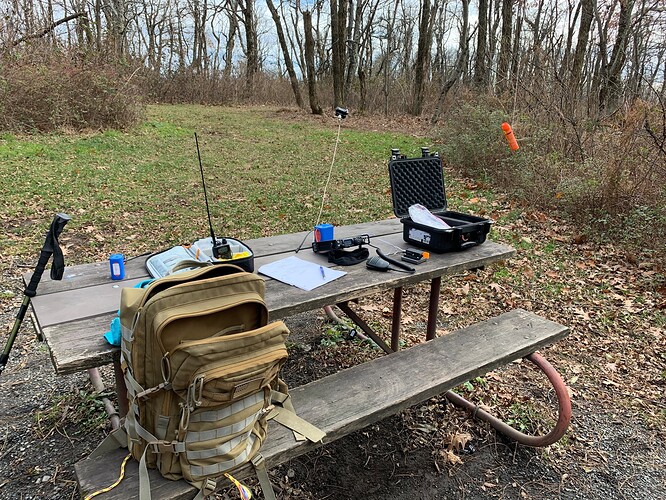 This was my 3rd mountain of the day and I was planning on driving most of the way up since I had already logged 12 miles including 2 activations last evening….But…the access road was closed! 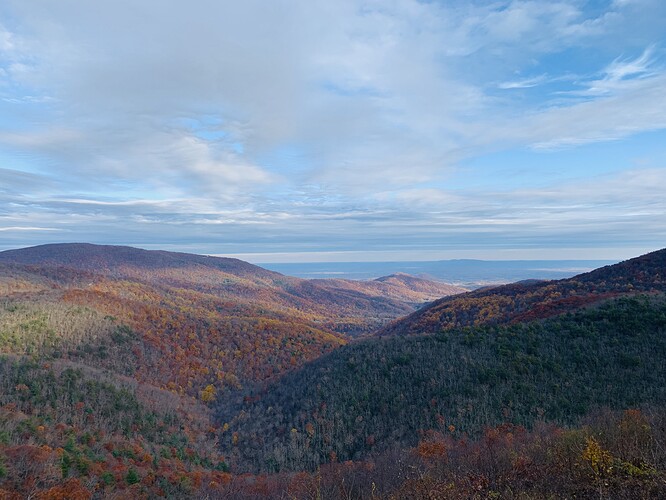 Undeterred. I made the cold 1.4 mile hike up on the road and setup my station. I quickly picked up 7 VHF QSOs on 2/6m FM and tried a bit of 6m CW but still no luck!

I was ecstatic logging the prolific chaser W0MNA on my 2nd QSO Thx Gary!

I know for some of the OM activators this is mundane but CW activating has been the goal since first leaning about SOTA. In preparation this past summer I started activating POTAs via CW so today went super smooth minus cold-numb fingers making Tx sloppier than normal.

I received 7 VHF QSOs for SOTA then activated HF simultaneously with POTA Shenandoah National Park. If I log the HF contacts (SOTA) will it negate my ALL VHF MG goal?

I as well did my first cw activation in September this year and I haven’t looked back it’svery addictive once the nerves and finger shaking get under control haha, I hope to chase you and get a s2s in the new year.

If I log the HF contacts (SOTA) will it negate my ALL VHF MG goal?

No. All that ALL VHF MG means is you have sufficient activations with at least 4 QSOs on VHF to get to 1000points. We can verify that simply we merely tell the award checker to only consider VHF QSOs.

I’m in a similar situation, having started to learn CW almost exactly 12 months ago. I have done a few CW activations but my skills are still limited. I struggled with S2S contacts on the Trans-Atlantic S2S party but I am reasonably proficient at a simple SOTA QSO from a chaser. What I would like to do is get to the stage I can actually have a “rag chew” with someone in CW but a lot more effort is needed from me to get to that stage. What I have discovered is if you reply to a non-SOTA CQ call the danger is you get a long reply which probably includes the local WX, the QTH and the operator’s name but this all just goes over my head at the moment.

you get a long reply which probably includes the local WX

Most of us CW ops still get a kick out of it - there’s always something new to learn or experience - but probably not as exciting as the first time. Well done, your efforts learning the code have paid off.

Congratulations Erik on your first activation using cw. I’ve been on a similar journey to yourself this year with trying to build up my cw skills so I could use it on SOTA activations. I can imagine your sense of satisfaction.

Good luck with it all, and hope to work you S2S one day. Using cw of course!

if you reply to a non-SOTA CQ call the danger is you get a long reply which probably includes the local WX, the QTH and the operator’s name

And that’s the way to go if you want to become really proficient on using morse code communications. Being able to just send/receive callsign, RPRT and TNX 73 GL TU is far too little.

If it’s you who call CQ for a ragchewing QSO, you have the steering wheel and decide how long or short you want the QSO. If you respond to somebody else’s CQ, you are at his/her mercy having to follow his QSO structure.

The more ragchewing QSOs you have, the more proficient you’ll sooner become.

I can make a ragchewing QSO with you if you want. Tell me, QRG and QTR and I’ll let you know if it’s OK.

Congrats, Erik. Sorry I missed you. …and you picked a summit with the picnic table for your first CW spot !!! Wishing you clear skies on your travels and many more SOTA summits.
73!
Mike, WB2FUV

Congrats on your first CW QSOs. You are not yet in my log but I’ll be looking forward to chasing you sometime soon.
73,

Erik,
Congrats on your first CW activation of this summit. It’s always fun to work activators on a summit and hear how they become hooked on this part of the great hobby called ham radio. It was great to work you and look forward to many more contacts.

Since I have 4 POTA spots within 30 minutes of my QTH it has been a great way to train Morse/CW. I can operate most days when home after going for a run at the park (simulate hiking up summit.)

I think I just passed 400 CW QSOs on POTA. So for this SOTA I was prepared. When you spot POTA the exchange is straight forward much like in SOTA and hams will be looking to work you! Try calling QRP on a random frequency to get practice and it will be crickets or someone might start a rag-chew ( shock!!)

I am not so bold to think above a general form style exchange I am any good but little by little more competency is comingI (Rag-chew is a goal) One example is getting the call sign on first go most times as opposed to asking them to send it 3x and them giving a RST of 599! When really between my ears it was 229.

I like the suggested response above when the QSO starts going long and I get lost. I’ll use it.

In Jan 20’ I started studying for the ham exams and thought it would be a neat thing but not sure what direction it would take me. When studying I learned CW was one of the modes and first thoughts were….”They still do that? Not interested!” How wrong I was!

The seed for SOTA was planted reading about this Colorado guy that hikes up mountains with GOATS!!!

Of course that was no other than WG0AT Steve! In one of his writings he talked about Morse/CW mode and I saw a picture from some mountain top with snow capped mountains and a bright blue sky, on the rocks was his MTR3B or similar and a paddle At that point I said to myself. “Man I want to do that!”

I thank Steve for the inspiration and it would be a honor hiking Mt Herman with him soon!

I’ll contact you by email and if it is convenient we can arrange a test.

A very worthy aim Erik. I did mine on 144/432 MHz and Unique summits. I now add HF CW (preference 10MHz) to my 2m SSB operations which makes a great combination.

Yeah it looks like a cool place to set up base-camp for a couple nights or so next spring. The area is Disneyland for a SOTA activator! I picked a table somewhat shielded from the bitter wind.

Definitely one of most plush activation zones out of the summits to date I’ve been on for SOTA and many others before SOTA life. I am glad the gate was closed and couldn’t drive-up. Although that’s cool for some on the SOTA journey. I got another 2.6 miles and 550’ vertical in for the weekend. I had planned on hitting Hightop also as I headed home but the hike up Big Flat ran me out of time.

Now a not so interesting fact! The hardest hike for SOTA I’ve done yet was my FIRST SOTA on Camelback Mountain AZ! It was 106 in the valley and super steep. I rock climbed in my younger days and was legitimately anxious on the “trail” up!!! I’ve gotten in better shape since then so that might have been part of my perceived difficulty.