I climbed and activated this one last September. It was a bit of a slog over peat hags and slopes clad with long heather. A late afternoon hike and I barely made it down before darkness fell.

I returned today, mainly because I’d found a different way up. One which started in Strathdon, so closer to home. It also had tracks all the way, or so I thought. Anyway I’m glad I went back. It turned out to be a remarkable and interesting day. 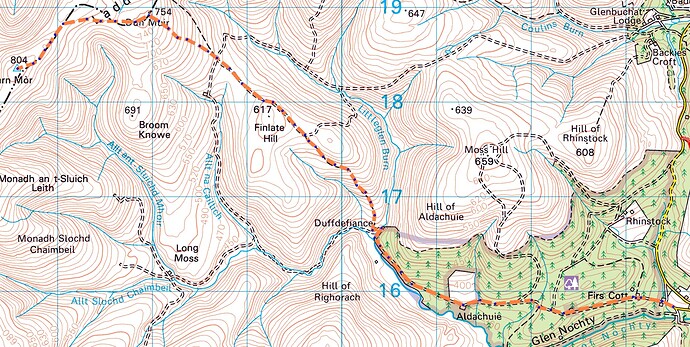 At NJ 334 158, I parked on rough ground and walked for 45 minutes on a vehicle track through pleasant woodland and plantation, some felled but a lot of new growth. I passed the remarkably remote Lost Art Gallery on the way. Now if one was to visit the gallery by car, a good hours walking would be saved over the day! 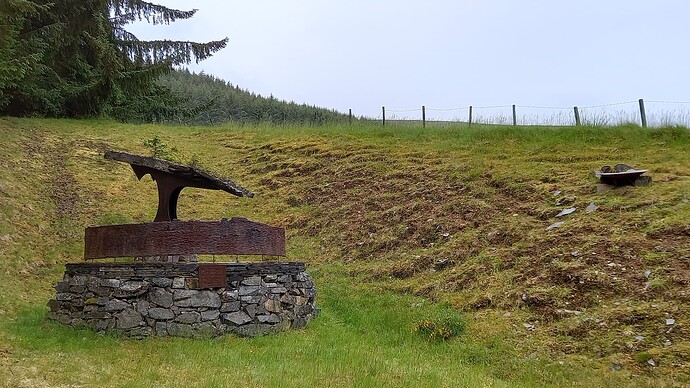 Out of the woods, across a shallow burn and on to the open hillside, climbing steeply for a bit. The track was hard to follow in places but soon led to a better (vehicle) track further up. 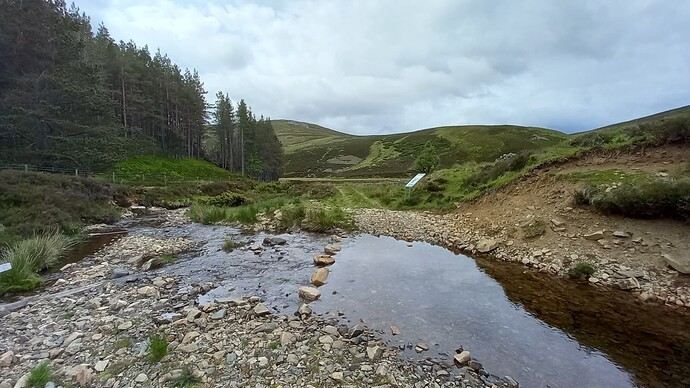 The vehicle track led to a T-junction, well a cross roads really, with my hill path in front of me. The track leading up the hill was very indistinct and I soon lost it. The way wasn’t too bad, with short heather, grass, soft but dry moss and then repeat.

Throughout the morning, I’d been surprised by the variety and amount of birdlife around me. I saw curlew, dippers, lapwing, snipe and heard cuckoo. the best was to come however.

Once near the top of Dun Muir, I cut left across some peat hags, with Carn Mor still 1.5km distant. Suddenly a huge bird rose from the peat in front of me and glided down a nearby slope. Before I could grab my camera it was gone, soon gliding above me. I’d just seen a white-tailed eagle! Shortly after, a mountain hare sprinted from a hiding place, probably relieved I’d disturbed the eagle.

Then the rain came on. Thankfully, a passing shower and it cleared off before I reached the top of the hill.

Carn Mor is an unremarkable summit, however I enjoyed good views up to the Moray Firth and beyond, across to the high Cairngorms, as well as the other main Aberdeenshire peaks. A good 360. A trig point but no shelter. 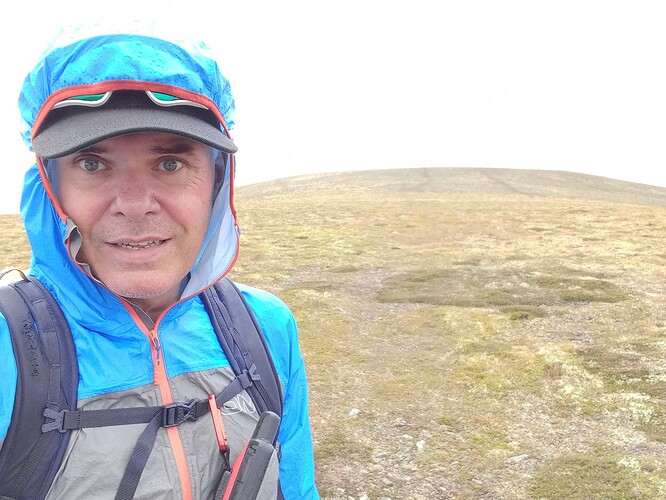 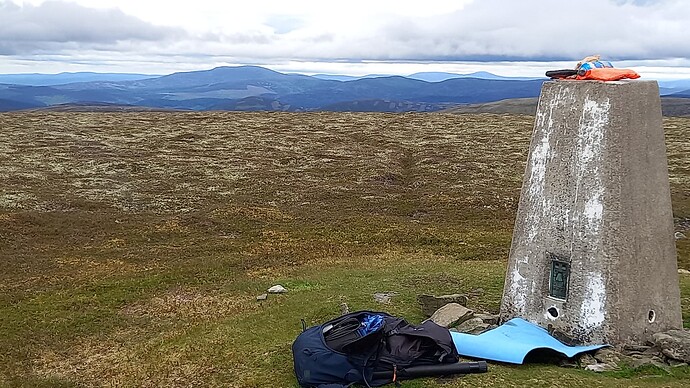 I strung up the Slim-G and hooked it up to my Yaesu FT-3d hand held. Really only to contact Simon @GM4JXP who was waiting for my call back in Aboyne. I spotted (optimistically as ever) on 2m FM.

GM5JET Duncan in Nairn came straight back to me, much to my surprise. I did comment to Duncan that I didn’t expect to qualify such a remote summit on 2m. I then had a short chat with Simon GM4JXP. The next QRZ yielded MM7JMI Jamie, who turned out to be Duncans son! Goodness, that was three, could I drum up a fourth. Well, after a couple more CQ’s, @GM0UDL Andrew came on from The Black Isle. Duncan had messaged him! Job done on 2m and in about 14 minutes. I did call a further few times and even switched over to the Aberdeen 2m repeater, but no joy. I was contemplating setting up HF, which was always the plan, when the skies darkened and another shower moved over. I therefore declared Victory and moved to pack up and get off the hill.

I pretty much followed the same route on the way back, however I attempted to find the bits of path that I’d missed on the way up. Find them I did. The first one took me over the top of Dun Muir, crossing some dry but level hags on the way. Dropping to a col between Dun Muir and Meikle Geal Charn (un-named 788m point on the OS 1:50,000), I picked up the path that descended to the Land Rover track. It was little more than a sheep track and hard to follow in places. Not really worth it for the added distance. 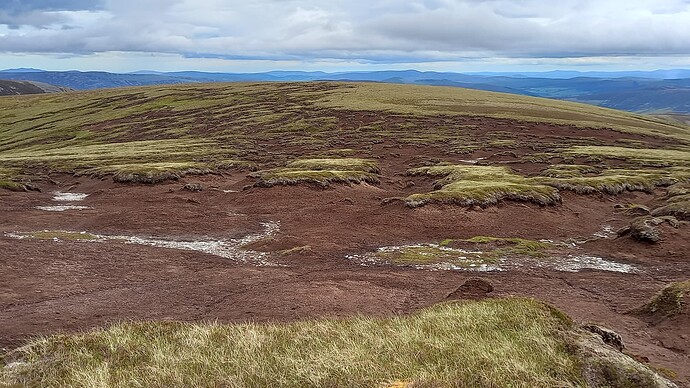 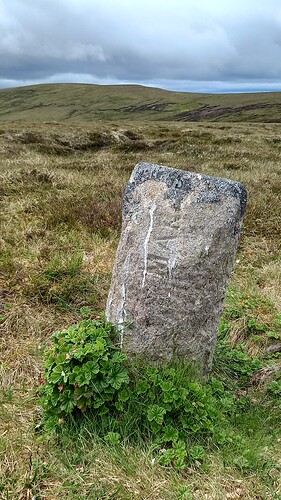 Back in the woods and heavy, steady rain started. It didn’t really stop until I was almost back home in the car.

SUMMARY
Glad I went back! The wildlife was varied and to see the Eagle made my day. I was aware there were pairs nesting up in Strathdon, but did I ever expect to see one? No!

The route I took was much more enjoyable and varied that the previous approach. Really nice countryside. It took me 2 hours 15 mins to ascent and about the same to come back down.

And the activation. Well, that’s up there with the Eagle. Four 2m contacts from a remote summit is rare for me, although I do have Duncan GM5JET to thank for arranging most of my contacts without my knowing!

Blast! Missed you again! I didn’t see your spot until 1.30 local time. I did call on S20 but you were long gone by then. I’m following Alerts while I’m up here, so I hope I can catch you again. Great report btw, especially the eagle!
73 John.

I sat waiting for you to come up on HF, but to no avail. I saw you’d removed your alert, so got back to the weeding job I’d been given with the thought that you’d most likely got rain. 27C, sunny and humid here. In some ways I’d prefer what you had.

Great to hear of the White Tail. I had a Goldie do something similar some years back. It was a juvenile which was probably why I got so close

Great report Frazer with photos. Tell me, what is this slim g you speak of.

Hi Geoff, It is basically a commercial version of a j-pole. I could never anywhere with a home brew j-pole and gave up on them. Then when I was out with Ben GW4BML, I saw that he was getting good results wiith a commercial version. He gifted a spare one to me and I’ve since bought one as well, so I have both BNC & PL-259 versions. 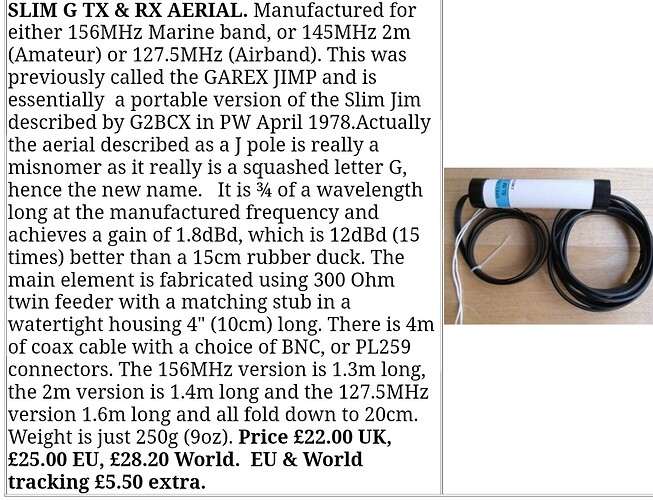 with a home brew j-pole and gave up on them

You can design these from 1st principles simply to massage your own intellectual ego. Or do what most do, copy a design from the internet. I did that and it would not work. Then I did the maths on the design and the numbers seemed wrong. I remade mine and it was fine. A bit more internet digging showed a design with numbers close to what I thought, I was not alone. Like everything internet based, someone publishes something and lots of people copy it and pass it off as their own work. The result at the time was a plethora of J-pole designs that were wrong. The dimensions I used on here somewhere. I wouldn’t be surprised if you had based your home brew on a set of bogus numbers Fraser and the amount of time you can waste trying to find what you have done wrong is quite impressive!

I seem to remember mine had perfect SWR at about 130 MHz. I couldn’t be bothered with scraping even more insulation off of the ladder line in order to adjust it, so abandoned it.

For £22, the Spectrum Communications one is a bargain and just works. It’s well made and now I carry it everywhere with me.

Back to work today! Give me a shout if you make it up Brimmond or Hill of Fare. I’d recommend the latter. Great views up Deeside. I used Simons route.

Back down to Earth with a crash on GM/ES-070

I saw you’d removed your alert

I sometimes forget to do this if I’m abandoning a summit. I’m glad I did this time and I’m glad you saw it Gerald!

I guess it’s good etiquette, although not always possible. I was using VK Port-a-log on my phone and it started to struggle when rain drops hit the screen…

hi Fraser, I looked at that site …it was dated 2021 with old prices. They have an ebay site which is in that link you provided but nothing like you sent.

Geoff, The antenna is for sale on his ebay shop. 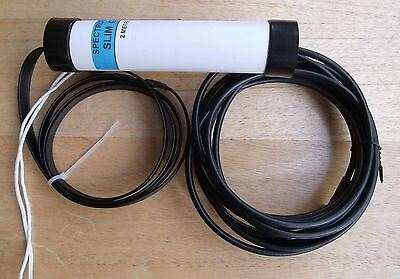 The radiation and reception pattern is close to omni-directional. This is essentially a portable version of the Slim-Jim aerial described by Fred Judd G2CBX in PW April 1978. The aerial was originally developed as a J pole with a 1/4 wave section one...