Back down to Earth with a crash on GM/ES-070

I’ve been slowly knocking off the smaller hills that I drive past on my my way to work each day. I’ve mainly been doing them by bike.

This morning, I left home at 0800BST (0700z), having packed my radio gear, some food and spare clothing into some bike-packing bags. I’d be taking the gravel bike. 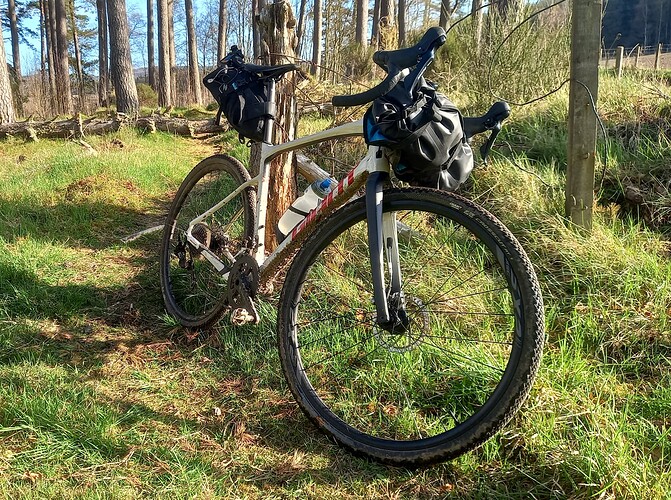 A couple of km through the local woods and then around 25km of undulating road found me at the ‘Back of Hill of Fare’ car park, the start of an ascent route recommended by @GM4JXP Simon. 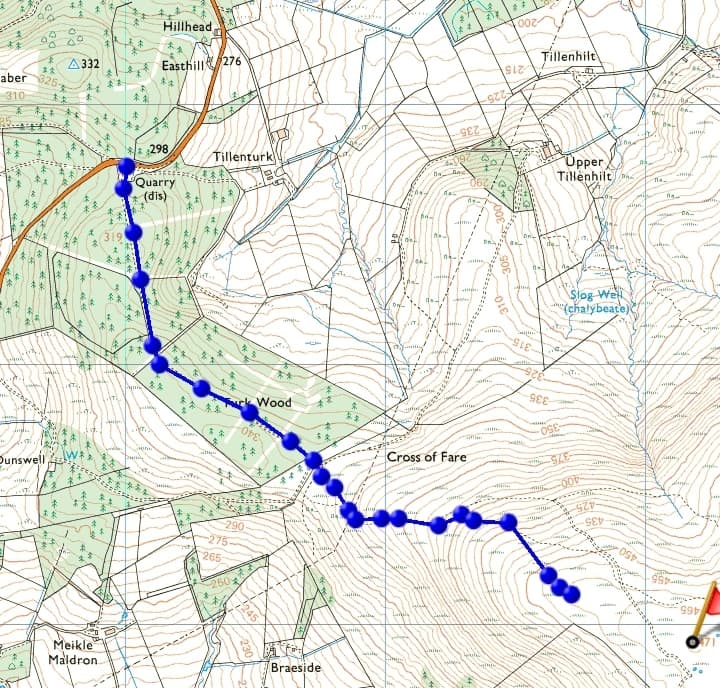 The first 2km of this was easily rideable on a nice forest track. As the track exited the forest, an earthy track rose to the right and I pushed the bike up this for about 1300m. A short path led to a cairn. Not the top, but probably the best viewpoint. Hill of Fare has a large flat top and probably limited views. I say probably, as I didn’t go any further, as the cairn was within the activation zone. 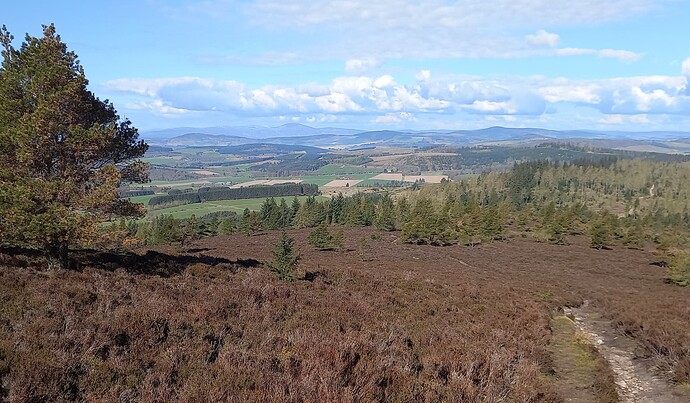 I didn’t have walking poles today and I needed something to hold the EFHW feedpoint and 1:49 autotransformer off the ground. The cairn was small and a bit unstable, so I decided to use the bike. Little did I know at that point that the bike would have a bigger role to play.

I fished the co-ax out of the bag, set up the carbon6 pole and wire. (The heather is long and a right pain at this location BTW.) I then realised that I’d not packed a BNC female-female adaptor. It normally lives on the 1:49. Mmm. Ok, I’d have to connect the 1:49 directly to the KX2 and run without any form of counterpoise. The following picture shoes how it all ended up. 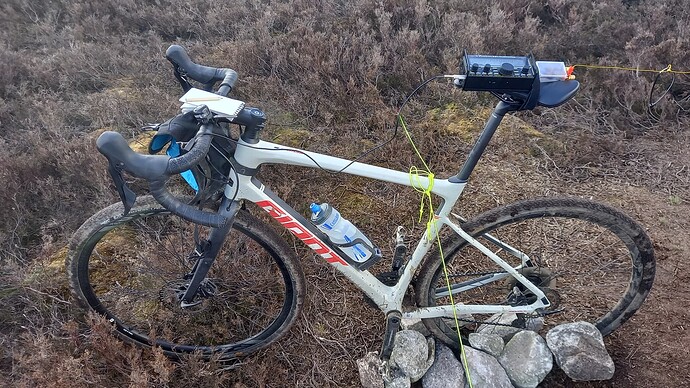 The activation commenced at 0918z on a suspiciously quiet 20m band. Well it actually commenced a few minutes before then when I called Simon up on 2m for his Complete.
My first HF contact, with @F6FTB revealed that there was deep fading and we couldn’t complete the QSO at that time. By 0930 I had nine in the log, including @TM2I on F/CR-216, which was a real struggle due to QSB and poor behaviour causing QRM. Thank you

40m was a little better, but still not great. Thirteen in the log in eleven minutes, GI, G, GM & PA. During the short pileup I did hear other stations, however, either due the band conditions or with just a point on offer, they didn’t hang around for a QSO.

I called it a day at 0946 but hung around on the summit for a further half hour, enjoying some food in the spring sunshine and slowly and carefully stowing the kit away.

I managed to ride most of the single track back down to the forest road (not bad for a gravel bike and I did pass a bemused mountain biker as I hurtled down the hill with luggage!) and the last 21km of road to work took me just about an hour, arriving at 1230BST.

Summary
The bands were in good shape early this morning and portable G stations had reported working VK on 17m and 20m. I suspect I missed it by an hour. So, not so good on the radio today, but nice to qualify a new summit and it was a fine day for a cycle.

Standing up operating was a refreshing (although enforced) change and it’s amazing how I was able to take in the views a lot more than normal. I didn’t get any reports of rf on my audio due to running the EFHW with no counterpoise straight out of the radio. I meant to ask but forgot. So if anyone reads this and does have anything to report, then please let me know.

Oh, last on the short list of hills that I can commute to is Brimmond Hill GM/ES-086, which is unfortunately 4km beyond my work. It sits on the edge of Aberdeen, so I’d like to think I can qualify that with a 2m Handheld, but I’ve not got a good track record of getting Aberdonians to answer my CQ calls on 2m!

I didn’t get any reports of rf on my audio

Sounded fine to me, despite the obvious signal limitations of being relatively near. As for Brimmond, I’ll look out for your alert and try to work you on 2mFM if I’m around.

40m was very long today, I could tell you were there but no contact was possible.

It was all over the place Brian. I had contacts locally, and in Edinburgh, Carlisle, N. England, Midlands, Wales, south coast and Netherlands.

I also had messages from almost as many people saying they couldn’t hear me from many of those places.

Still, if we were all working around the globe every day with 10 watrs into a wire, it would soon become pretty boring.

As I understand it, running your antenna without the counterpoise wire is somewhat like using only half the antenna. Even an alligator clip lead hooked onto the bike would improve the efficiency. It can connect to anywhere on the radio but the earth lug is a good option, as your transformer is an auto transformer so the cold end normally connected to the counterpoise is also connected to the negative side of the radio, the microphone, the operator, the bike (by capacitance only) and eventually, the ground by capacitance only, (not much of it). Good work with the activation by bike.
73 Andrew VK1DA/VK2DA

Very nice rig for hitting the trails, the radio is pretty decent too.
Brian

I found yesterday a struggle on my two activations. On the plus side there were plenty of S2S but I usually get far more QSOs. I tried 15m and 17m for the first time and got nothing, although that could well be my antenna. There’s been some geomagnetic activity which I assume is responsible for these conditions.

Even an alligator clip lead hooked onto the bike

The bike has a carbon fibre frame Andrew. My autotransformer has a terminal for a counterpoise but I haven’t been carrying one for a while. The 5m length of coax generally does the same job.

One for the antenna modelling experts to work out!

I’ve had decent success on these bands in the past couple of months, however yesterday there wasn’t any activity above 20m. I’ve started looking at DX Heat before I go to the upper HF bands. Often that’s a good indication.

About the missing counterpoise:
Due due the high impedance, there is very little current flowing against ground, when using an EFHW. That’s why usually a length of 0.05 Lambda is fine. If there is no attached counterpoise, the radio, battery, as well as you and all surrounding conductive parts (like your carbon framed bike) will be part of it, by stray capacitance.

Yesterday, the conditions were indeed very strange. In the early afternoon, at one point the bands got so quiet, that I thought that a blackout is going on.

If you have enough internet connection worth checking spaceweather and dxheat when the bands seem odd when you are activating. 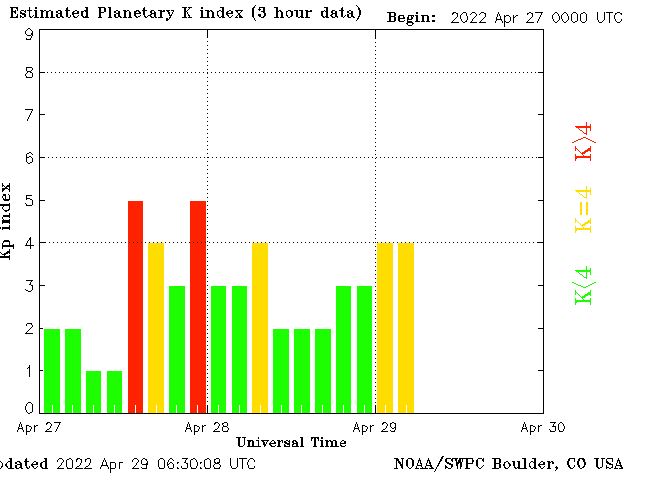 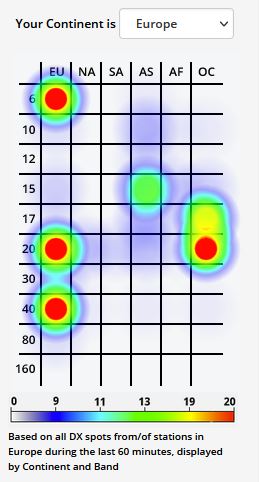 KP=5 yesterday is not good! DXheat map for today shows things may be better now.

What I said! sotl.as has sfi, K index etc helpfully at the top of the page now. 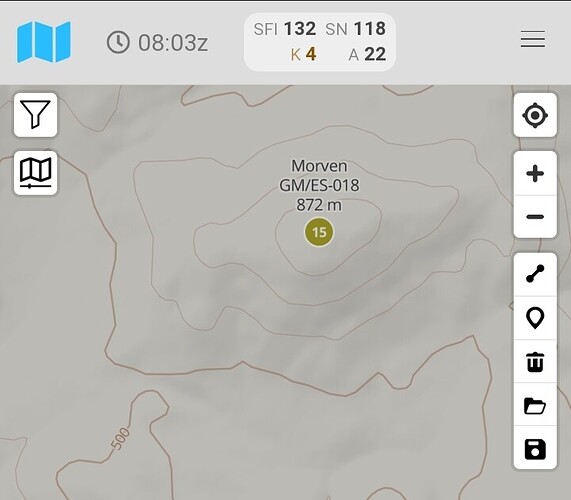 Due due the high impedance, there is very little current flowing against ground

Hi Stephan, I have read your excellent paper and understand the principal. I always use the 5m of coax that you recommend. That’s the only reason I was unsure of connecting it straight to the radio and the risk of rf getting back to the mic.

…the risk of rf getting back to the mic.

Yes, this happens sometimes and EF-antennas are prone for that. There are so many factors why and when this can happen. The rig plays also an important role. With my 818 I never experienced a problem, but with the TX-500, which also has more output power, I experienced this problem several times, but only on higher bands (>= 17m).

Changing the layout of the coaxial cable, more distance to the antenna, reducing the mic gain and compression level, holding the rigs ground, etc. can solve it. Connecting a CMC at the rig’s antenna port solved it always for me.

I was glad to read that the crash was metaphorical. Perhaps I am too literal, reading the title I initially thought that you had fallen off your bike! 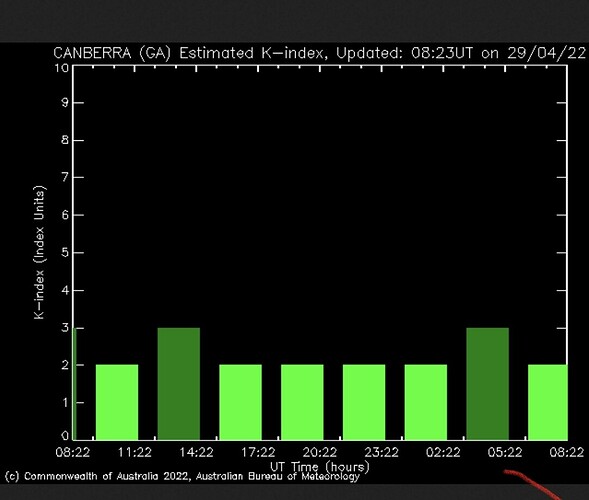 Andrew, maybe it changes depending on your QTH when you log in? I think the NOAA one I posted will be for Boulder CO.

EDIT: Yes… it’s says Boulder on the clip I pasted. I should learn to read

That will probably change later as a CIR is expected to impact us today. The jittery conditions yesterday may have been the aftereffects of the G1 storm on Wednesday. High sunspot numbers aren’t all joy!

thought that you had fallen off your bike!

It was more of a static crash than a mountain bike crash! Could have been both. Taking a gravel bike down a stony singletrack descent was a rush. Of course doing this with a £1000 radio in the bag is probably questionable…