Tell me about your activation failures where you’ve failed to even reach the summit!

On Tuesday I had a disastrous activation attempt of Ben Nevis where I failed to reach the summit due to a ongoing knee injury.

I made it about 3/4 of the way to the summit before my knee gave out & the pain became so great that I had to abandon the attempt.

It may sound a bit daft to attempt Ben Nevis with an ongoing knee problem but having fairly recently activated the 3 biggest summits in the Lake District over a period of 4 days, I genuinely believed that if I was well rested I would make it to the summit of Ben Nevis…I was wrong.

This trip was cursed from the start:-

Despite my grim determination & best efforts, it just wasn’t to be!

I’m now feeling really defeated & frustrated. Make me feel better by telling me about your disasters which have prevented you from reaching the summit!!!

There’s a video on my YouTube channel which includes clips of the drive up & my somewhat comical attempt at erecting a tent if anyone wants to see it:- 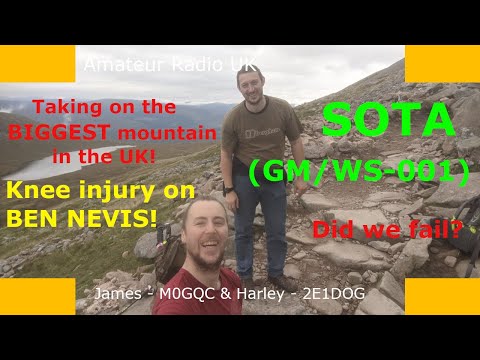 Hi James, sorry to hear of this attempted activation and the problems you had. Very disappointing for you.

Sorry to hear about your knee James. At least you were able to get yourself down safely.
I have 3 failed summit attempts to my credit (?):
GW/NW-001. Following a storm that had me sheltering in the valley (alongside the mountain goats who’d come down too!), the Met Office forecast a weather window the next morning. Apparently meteorological morning ends at 1000. I got to within about 200m of the summit, before deciding that I wasn’t going to sit at the top in those conditions playing radio. So I left it for another time.
GM/SS-201. First time I left too little time before my ferry sailing. I hadn’t expected such a long walk-in. We walked for an hour to stretch our legs and lived to conquer it another day.
G/NP-002. Very frustrating! I got the permit. It was a lovely day. Plan to cycle the first half along the Pennine Way worked well. I could not find a safe way across the river at the bottom of the fell! Going to have to repeat the application process, prayers for good weather and try the southern route.

Hi @G6PJZ Crossing the river accessing G/NP-002 from the nth can be tricky. The safest way is probably just to accept wet feet and cross at shallowest point. near where you just follow the fence straight up. I’ve only activated once, but done the Cauldron Snout - High Cup Nick section many times on foot and MTB. Summit on Mickle can be a wee bit breezy(!) and phone reception can be a bit iffy from 4G to zero depending on where you are.

Numerous land access issues here in the states. I’ve left the house dozens of times only to be turned back at an unforeseen gate or sign. Once I was intercepted by a land owner during a rainstorm hiking up a hill that was unmarked but, as it turns out, privately owned. Lesson learned: do your homework on planning using GaiaGPS, or the many planning tools that are SOTA related.

Lack of cell reception has threatened to stop a few activations with a lack of spotting. Lesson learned: APRS is your friend. I’ve used it on peaks miles from the nearest cell tower, with great success. Also posting alerts and praying RBN or a kind chaser will spot me has worked sporadically.

That sucks James but taking care of the knee is #1.

On my 2nd ever solo activation I wasn’t paying attention and ended up activating the false summit cause the All Trails app showed it as the summit.

If I had paid attention a bit more I would have noticed I was on the false summit, I ended up realizing when I got home what I did and contacted all my Chasers and I went the following weekend to redo my failed activation on the true summit.

A hard Lesson learned but 14 activations later and I pay a lot more attention to detail on the maps.

73 and hopefully the knee recovers fast! 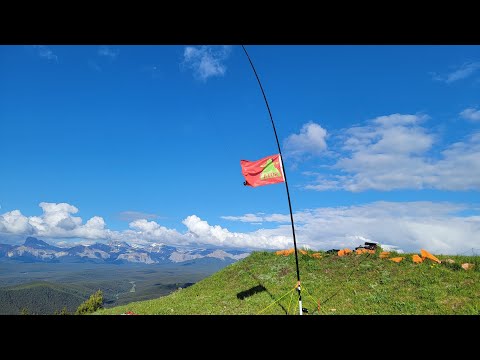 GW/NW-043 - Late in the evening and QRM from the adjacent radio mast. Bought the sotabeams filter when I got home.
GW/NW-042 and GW/NW-005, 004, 003 - Got to the parking spot, checked kit and I’d left a coax adaptor at home so no way to connect antenna to radio.
GW/NW-005 - Tried to follow a route up in the damp but it was a poor choice of route. Slipped a couple of times, terrain was getting worse and cloud started coming down so abandoned the attempt and did GW/NW-071 instead.
GW/NW-009 - Nearly had to abandon because a tame sheep kept trying to eat the coax.
GW/NW-073 - Started walking up and a spaniel started following me. Despite several attempts to leave her at stiles and gates she kept finding a way through and followed/showed me all the way to the summit. I watered her and managed 4 contacts on FT8 but as soon as I set up on voice and called CQ she was jumping all over me and not even a cuddle would make her stop so I had to pack up and go back down. Found her grateful owner at the farm and returned her, although she still tried to follow me back to the car.

One of my last activations that went differently than planned was on the Altringenberg DL/AL-272. Actually a drive-in. I walked a few meters to it. Tensioned antenna wire, unpacked TRX, connected battery, and cq on 20m. After the 2nd QSO the TRX went off. Hm, battery not charged…

No matter, spare battery was there

Connected. TRX did not start. Conclusion. 2 empty batteries in the luggage

Started walking up and a spaniel started following me. Despite several attempts to leave her at stiles and gates she kept finding a way through and followed/showed me all the way to the summit. I watered her and managed 4 contacts on FT8 but as soon as I set up on voice and called CQ she was jumping all over me and not even a cuddle would make her stop so I had to pack up and go back down. Found her grateful owner at the farm and returned her, although she still tried to follow me back to the car.

Thank you so much for this story. I had to laugh a bit and wonderfully imaginable thanks to head cinema

I found a picture of the culprit: 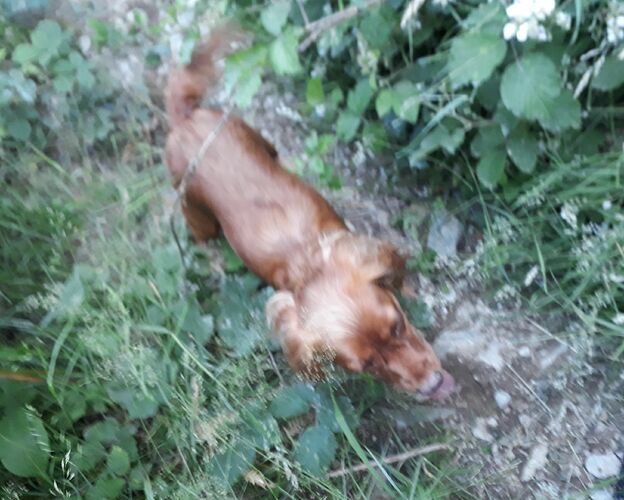 Went back and activated the summit yesterday, dog free.

It has been a few years since this happened. I wanted to activate EA1/LE-173, Pico del Bregon. I was accompanied by a friend from the area, but not a mountaineer. I wanted to take the most direct route to the summit, with lots of spongy vegetation. My friend refused to accompany me through those places. We left it for another time.
On the second occasion, this friend accompanied me again. This time we went the easiest way I knew. But when we reached the end of the road, we had to climb up through the bush, again in the undergrowth. My friend got stuck again. We had to give up.
Logically, on the third attempt I went alone. I followed the planned path, continued along the high part through heather and thorny vegetation. Only my stubbornness allowed me to continue. With great difficulty I reached the summit… to discover that there was a very easy access path on the other side. Logically I descended that path without difficulty.
This summit is still today with only one activation.
73 and GL
Juan

The weather forecast for today was great. I took a day off to activate alpine peaks once again. hb/ow-019 and hb/ow-018 can be combined wonderfully for a hike. There are different reports and different ascents. The anticipation was huge!

Inspired by the report of HB9TVK and since I am arriving from the north, I decided to take the shortest route and access from the north.

When I then stood in front of the wall in the morning it was quickly clear to me that I was not doing this…safety first! The last few days were warm and I had not expected snow and ice along the hiking route. 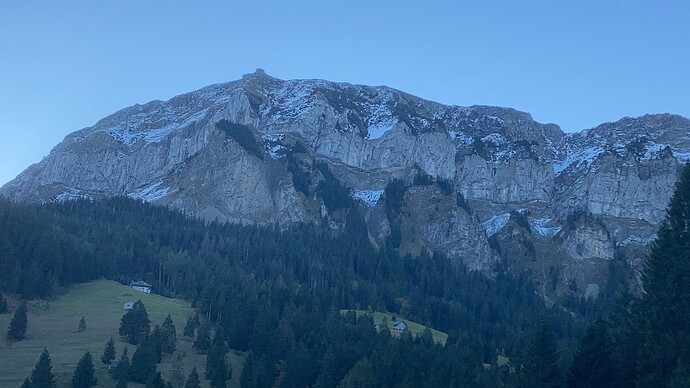 A short moment I still considered whether I take another longer drive on me and approach the tour from the south. But then I decided that the mountain will not run away from me … next year I have more time anyway (then I’m retired)

A Plan-B was quickly found … I have simply activated five 1 Pointer, which were just in the vicinity. Not such impressive - but still 3 completes.

I posted my whole tale, thus far, of attempting to reach the never activated W6/CT-127 (aka 4654) over on the summits database which I’ll link in below, but… the short story is this summit is as remote as you can get in an area of the San Gabriel wilderness here in Los Angeles county. I attempted twice to find a way via a canyon filled with rockfall dams and chest deep freezing pools as well as sheer vertical walls, requiring proper canyoneering kit I do not have, to surmount.

I have concluded that a ridgeline approach is the only way, but before I could attempt that, the entire area was incinerated by the Bobcat fire in summer 2020. When it opens again in a few years I’ll have another go… reach out if you consider it… I have a plan/track I think might work, give a shout.

This pool is deeper and colder than I was prepared to deal with. 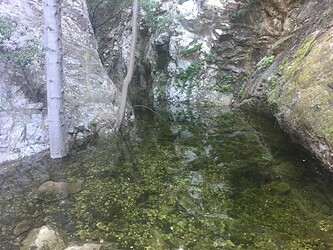 Same pool 6 months later was dryer, but still surprisingly deep. As a veteran of many a round of “Oregon Trail” I caulked and floated and did get to the other side… 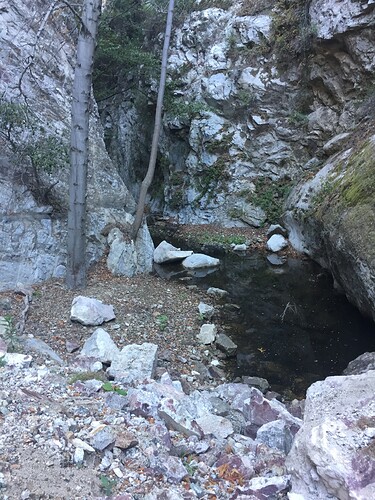 … only to come face to face with a 70 foot sheer wall/waterfall guarded by a 10 foot deep moat. 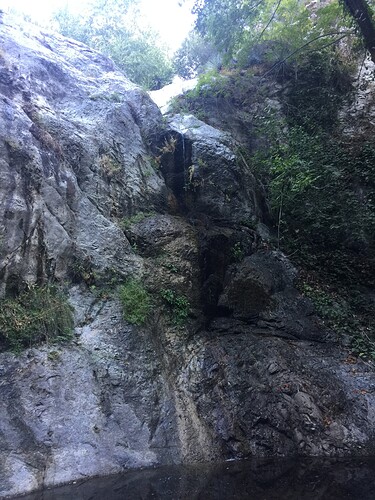 The saga with a few more details.
https://summits.sota.org.uk/article/21378/view

Now that looks like fun! I’d call it “work in progress” rather than a failure.
Reminds me of wading through chest deep water through a Utah slot canyon few years back. The canyon walls were initially a mile apart. After 7 miles they were a foot apart. Thankfully no radio kit with me that day!