However, did manage to work TM15IF

Sorry. Yes conflating the TM15SOTA and special TM2IF calls when I posted. The call is correct in my chaser entry. But I did have the summit correct - TM2IF was used on several summits that day by several operators. The operator was F5ODQ - from the following spot. 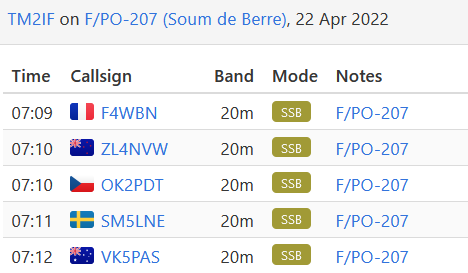 EDIT: change of plan due to low cloud wx forecast.

Internet coverage may be an issue, so possiby won’t be able to chase summits. I’m likely to SMS self-spot and we’ll go from there.

The propagation forecast is all positive

Charging my batteries ready for a return visit this arvo. Did well yesterday and the weather was kind.
May as well get into it before the winter gales and snows appear.

I went out again this morning 0615z-0715z, antenna pointing towards VK/ZL.

I heard @VK2WP but I don’t think he heard me and I couldn’t break the pileup with my 5w. Also heard a couple of other VK and ZL stations working him.

No VK/ZL seen on FT8, but there may not have been any FT8 operators on at the time.

I couldn’t stay any longer as I had other stuff planned for the day, but went back up later unsuccessfully chasing NA S2Ss.

I’m going to have another go tomorrow on 20m SSB after almost managing a QSO into ZL today. 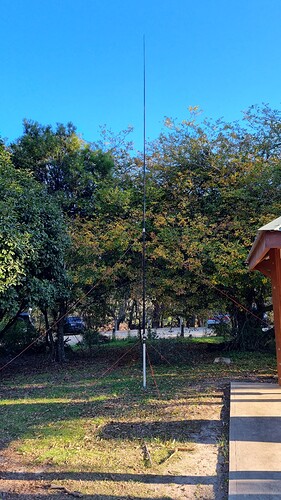 including EU and NA stations.

A small sample of the pile up is at https://youtu.be/WzVYCbxqwwM It’s only 30 seconds because I was filming with the same device I was logging with.

I went QRT at 0800z as the sun was setting with 65 QSOs, 15 countries, in the log and packed up in the dark.
Thank you to all who called me and my apologies to those I couldn’t work. 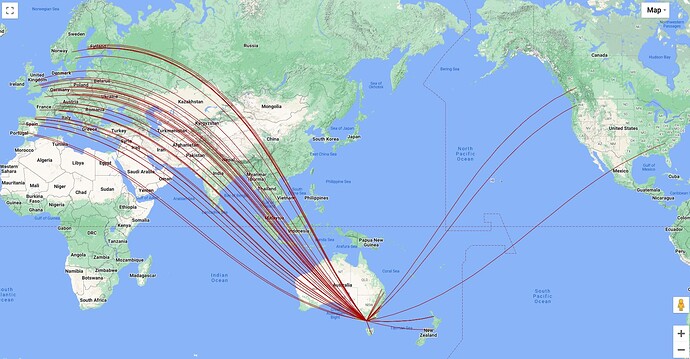 Yep. That’s what it sounded like. Except without the strong ZL1TMs there much of the time. And if you didn’t call one in, it just went on, and on! Over & over & over the top of each other.

Think of all the times I’ve spent hours calling into silent bsnds for that 4th qualifying contact on 8+ point summits. Darkness encroachng, camp several hundred vertical meters below. Loitering on 80m around nets and QSOs in the hope if snagging a contact as they finish up.

What a difference a few months makes!

EU chasers calling over the top of ZL2ATH/p while I am trying to complete a S2S. Very rude…

It was hard to get the big grin out off my face for the rest of the day.

Thanks so much, also to all the other chasers during this activation.
73, Chris
DL3EC

I could not take part in the NA <-> EU S2S Party yesterday afternoon so I decided to try to work some DX today morning … and I succeeded!

After the miserable weather yesterday I had luck this morning with a few hours of sunshine. I set up my station right next to the summit … 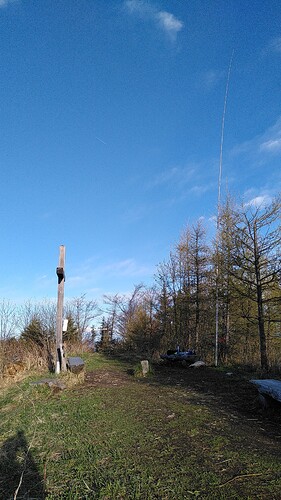 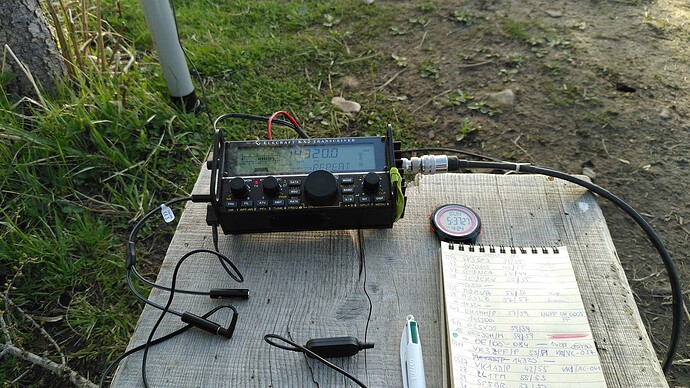 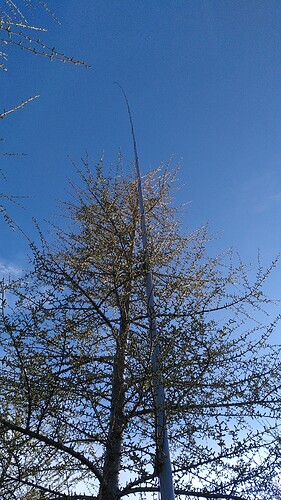 I was really struggling to get @MM0EFI in the log, but with his patience and good ears it was also possible! After working the usual EU chasers suddenly @VK3CAT called in at 06:37 UTC. 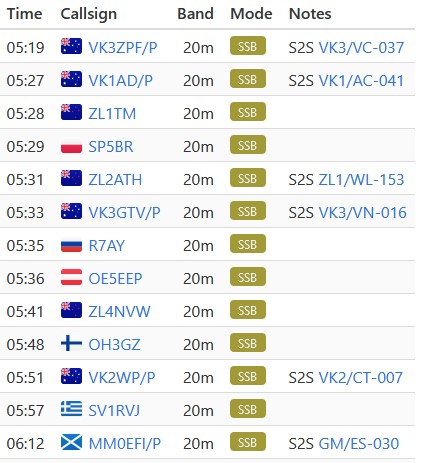 After working two local stations on 2m FM I started packing up at 07:00 UTC. It has been a pleasure to work 5x into VK and 3x into ZL … it was worth getting up early!

I had a short attempt from FL/NO-087 again this morning. I could just about hear @VK3ZPF on 20m and he heard me calling S2S and responded but we couldn’t complete. I thought the band was noisy compared to yesterday which probably didn’t help.

I briefly called CQ on 20m CW but a quick check on RBN suggested my signal was barely getting out of Europe and I couldn’t hear any of the VK CW operators.

But it was still an enjoyable session despite the lack of obvious success.

My activation of Isaacs Ridge VK1/AC-041 & VKFF-0845 started quite well at 0515 UTC on 14.310 MHz working Matt @ZL4NVW followed by OH1MM, OH1XT, G0VWP and a few others, the activation was proceeding well ‘happy place’. At 0525 I heard Wynne @ZL2ATH call me with a ‘Summit to Summit’, at this point I had 5 contacts in the log. Next, two EU stations a ‘SA’ and an ‘IK’ repeatedly called over Wynne 4 to 5 times both with huge 5-9+ signals. I was very angry shouting down the microphone telling them to stop and each time saying ‘ZL2ATH Only’ ‘ZL2ATH Only’, yet they continued

The message eventually sank in and I did complete the S2S with Wynne, thanks Wynne for persisting

With one completed S2S in the log I was surprised to hear another S2S call, this time Martin @OE5REO at OE/OO-084. Thanks Martin for the bonus OE summit.

After working Martin I QSY’d to Fraser’s @MM0EFI frequency 14.3275 and listened for 10 minutes but no joy. By now the EU chasers may have wondered where I had go to, I did think of not returning to 14.310 MHz and instead just spend some time listening for S2S contacts.

and we completed a 5-5 exchange. Thanks Fraser for your persistence, I am over the moon to have completed a 2nd GM S2S in two days.

I completed my activation of Isaacs Ridge with a 5-2 S2S exchange with Peter @VK3ZPF at VK3/VC-037. Thanks Peter

Summary: Setting aside the poor behaviour demonstrated by a couple of EU chasers, I note 2 and I am sure the rest of the EU pack would not behave in the same way, the long path opening produced 55 SSB QSOs and a new country Norway courtesy of LA3VJA. For the propagation nerds my timings were 0515 UTC to 0700 UTC. 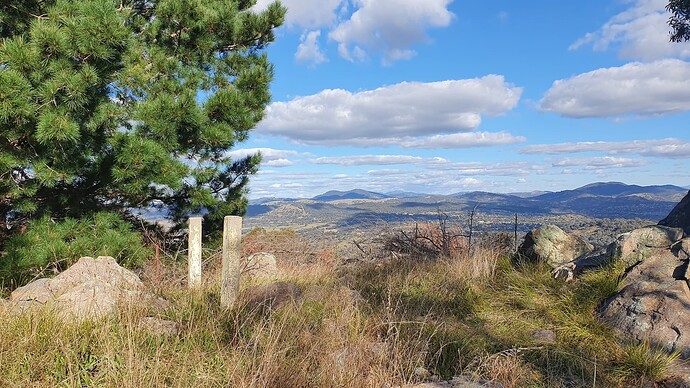 Inverted V dipole with the apex at 7m. Edit: Antenna is broadside East-West with the elements North-South. 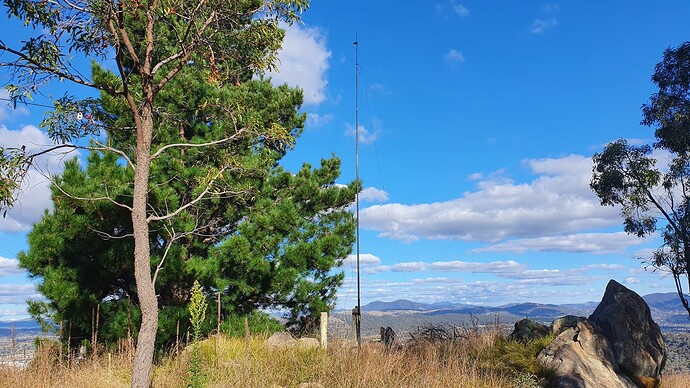 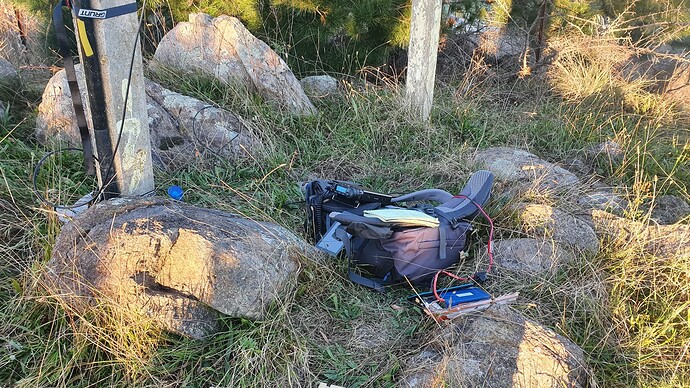 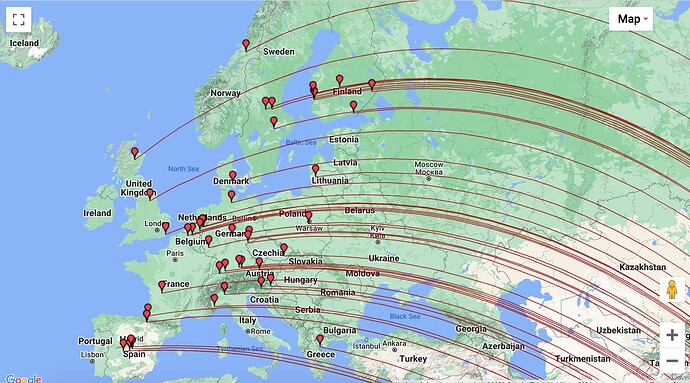 Thanks all chasers and activators, I had loads of fun working the pack and the challenges of S2S QSOs.

That’s it for me. I am planning to be in OE in May and at FN on Friday 24th of June with Herbert OE9HRV.

For my effort today I went to my closest summit VK3/VC-037 that is within VKFF-0753 Bunyip State Park. From home earlier in the day I had worked Ron @VK3AFW when he was activating VK3/VC-037 and when I arrived on the summit he was still there. We chatted for a while then I moved away about 50 metres and set up my 20m droopy ground plane and FT450D and started looking at spots and calling on 20m. 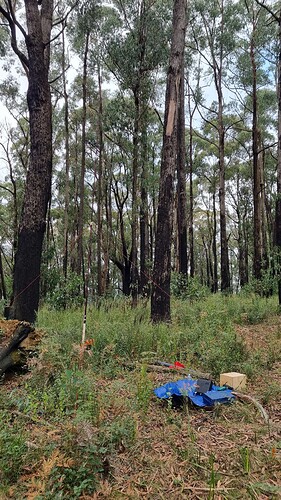 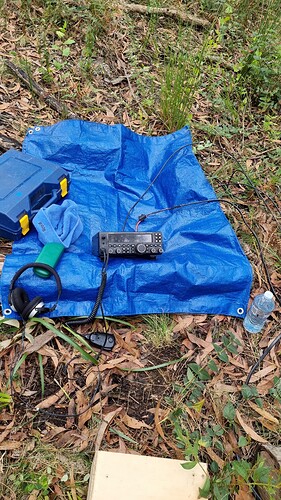 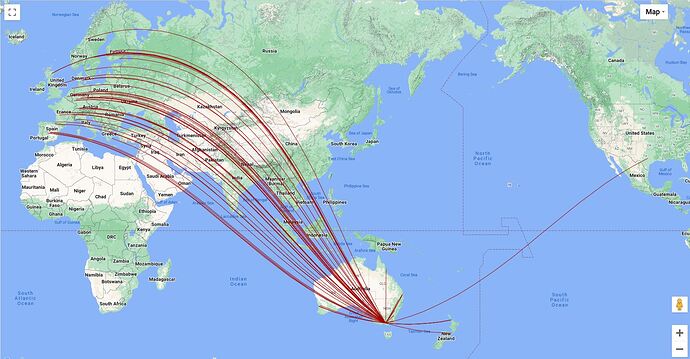 I had plans for an early start and a long day in the hills including some VK summit chasing. However, a late return from the Speyside Stages rally yesterday evening meant little time to prepare, and to be honest, little appetite for a big day on high tops, especially as the WX forecast was for low cloud until mid-afternoon.

I set off from home at 0345z, heading up to the Lecht ski centre. Cloud was handing in the valleys but the tops were clear and I could see the summit of Carn Ealasaid as I approached the ski centre.

However, the ski centre was fog bound, with visibility so bad that I didn’t see the ski patrol hut until I was nearly at it. 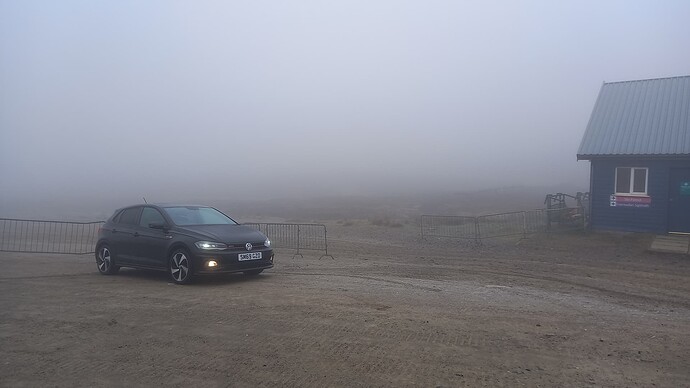 I set off at 0415. following the gravel ski road steeply up to the ridge before turning right across the top of the tows and on to the top of Beinn a’ Chruinnich. Then a sharp left, heading south and unfortunately descending across short heather and peat hags to reach the spot height 694m on the map. 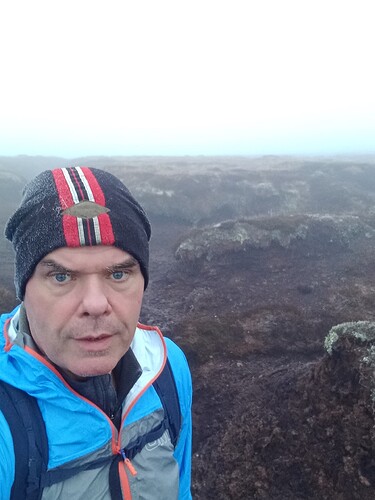 On a clear day it is easy to avoid the peat hags. Today I couldn’t see 50m, so I had to just head over what ever terrain I came across. The 694m spot height is right at the bottom of the deepest peat hag! Thankfully, once I had clambered out I found a narrow path that led right up to the Land Rover track that traverses the top. Time for ascent was 45 mins. 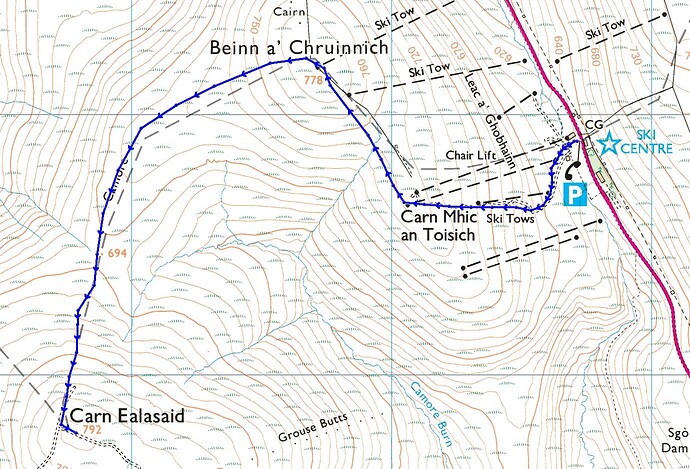 Summit temperature was 0C and I noticed that the fog was freezing on my pack.

The station today consisted of the Yaesu FT-857d, 5m of RG-174 (plus common mode choke) feeding into an “Upper & Outer” monoband for 20m. This was suspended from a 7m pole (only 6m erected) which was simply wedged into the rocks of the summit cairn. 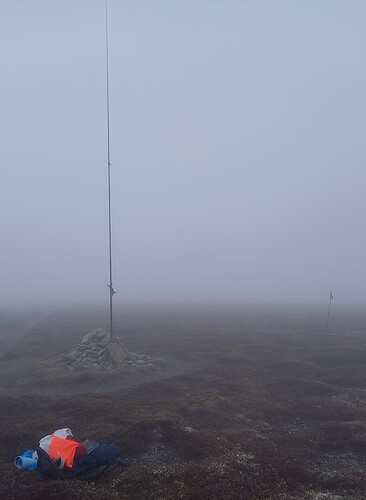 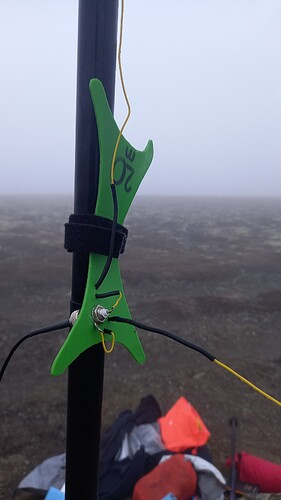 By the time I got on the air, I could already see some spots from VK & ZL stations on 20m SSB. Tuning around revealed no signals of any sort, so I spotted my own frequency and called CQ.

After several calls, at 0530 I worked SV7LNE and then LZ1WF. Then nothing for the next 25 minutes. Absolutely nothing! No answers to my CQ’s and no evidence of anyone else when tuning around.

Then at 0603 I worked strong signals from SV1RVJ. SV2SOQ & FY5KE, so at least I had qualified the summit as a consolation prize.

Looking again at SOTAwatch, I saw that @OE5REO/p was looking for DX from OE/OO-084. I’m sure he’d be happy with Scotland, so I called “Summit to Summit” and we had a QSO, although it wasn’t easy! Now it was 0614 and I’d been QRV for an hour, with still no DX. 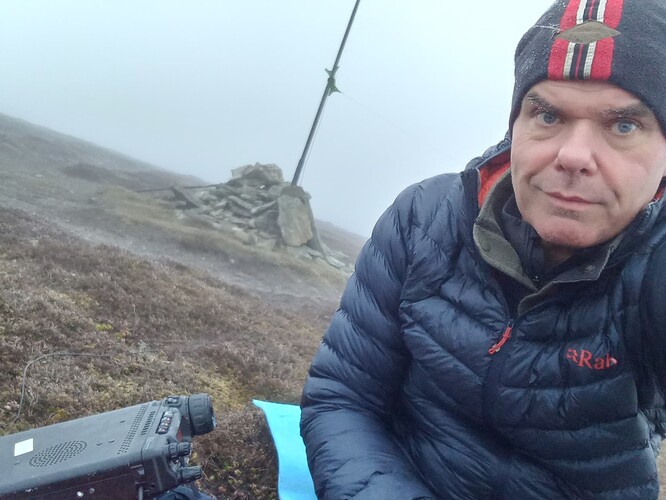 I was considering packing up. My bum was numb, I had a dead leg, cold hands and everything was getting covered in the dew.

Tuning around again for one last time, I could hear the VK stations coming up through the noise!

At 0617 I got @VK3ZPF/p in the log with 4/1 received. He was on VK3/VC-037. It was a difficult QSO and I wasn’t sure that we’d completed it, because as usual someone got impatient and started calling.

However, at 0635 he came back again, much better and with 5/1 this time. I then found @VK3ZPF/p on VK3/VC-037 a minute later, also 5/1 received. Then after a couple of other stations OM1AX & OH3GZ, I decided to have one last look for Andrew @VK1AD/p. I found him fairly quickly. His signal was definitely going to be workable, however he was working a big pile up, as EU was now awake! At his first “QRZ”, I jumped in with “Summit to Summit” and got straight in. He gave me 5/5 and he was 5/1 to me. 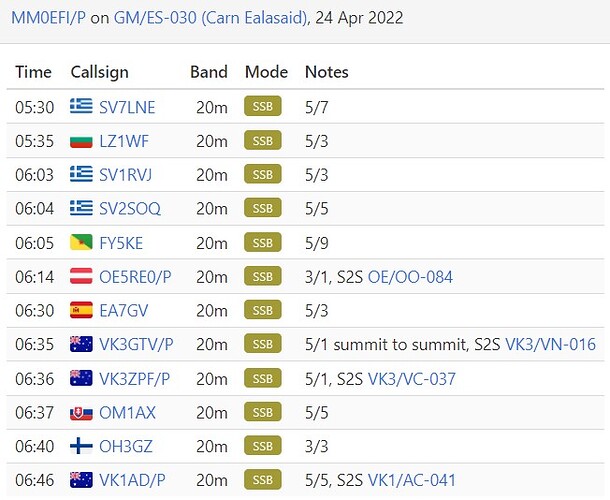 I packed up in no time at all, leaving the top at 0700 and was down at the car 40 minutes later. I somehow managed to avoid the worst of the peat hags on the way back. I made it home for 0800z and got some pancakes on for Mo, who was just thinking about getting up. (She thinks I’m mad, by the way.) 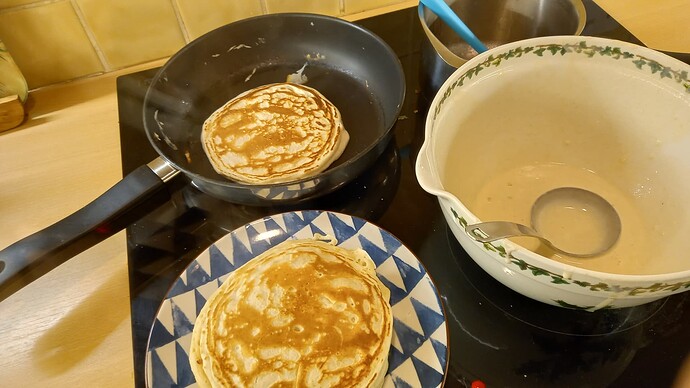 Amazing morning. Kit drying out and I still have the rest of the day to get up to no good!

A huge thanks to the VK stations for persevering and for picking me out from the pileups. Congratulations to Martin OE5REO for his outstanding log too.

An effort deserving of a great pile of pancakes.

Thanks Ron. Yes, the pancakes went down well with plenty of hot tea!