With wolves at the summit

Today I had my first encounter with wild wolves not far from the DM / NS-163 summit. Unfortunately I could only watch the 2 animals for a few seconds. But I’m sure, because the look and behavior didn’t suit stray dogs.
I am very happy to have free wolves in our area and the rare luck to meet them.
Happy Sota!
73 Chris

Many people would run mile or kilometres if they saw a wolf Chris. I remember in canoeing in northern Canada and we saw wolves too - great experience!! You were extremely lucky.

The efforts made over several years to recover wolves population in our mountains seem to start showing some results. Their presence is also being confirmed in wider areas of Spain too.
On the one hand it’s great having and seeing these great wild animals back living again in our mountains, but, on the other hand, I must admit I find it a bit worrying and scary and I’m not sure I’d venture in the wild on my own with no fear for SOTA activations, as I do in these days, should the packs of wild wolves become really common in our mountains.
What do you think?
73,

Yes, maybe I’ll never be lucky again. It was nice to see the elegance and skill with which they disappeared into the forest. I think they’re watching us 100 times more often than we are watching them.

I wasn’t afraid. Since there are free wolves in Germany again, no human has ever been in danger or harm.

In North America and Canada where wolves are relatively widespread there have been very few deaths caused by wolf attacks. Some of those have been carried out by wolves which have been habituated to human contact by being fed. Then they loose their fear of humans!!

We were canoeing in the Barren Lands on the edge of the tundra in NorthWest Territories, where the wolves have not been hunted for many years and the wolves show little fear of man. The Canadian we paddled with has spent years living up there and studying wolves. He, nor any of the wilderness canoeing trips he organised have ever been threatened by the wolves, which have little fear of humans. Not on our trip but he told he’s had at least one wolf come into camp during the day to investigate the group.

Attacks by Black bears near population centres are much more frequent!!

Congrats on the Wolf encounter! I had my first one this last summer on the Idaho Montana border. They saw me they were gone! Cool to see. Kris

Guru (and to the others with concerns) . In my activations (and just my day to day) I’ve encountered Black Bears, even going so far as to spook a mom and cub while venturing offtrail enroute to a summit. Coyotes and Cougars (aka Puma, Mountain Lion) and Bobcats. Main thing is do not act threatening, but also do not act like prey. Respect their space, and do everything you can to remain calm. To be fair the bears here are pretty sedate, not like Grizz but Grizz and Polar are the only Bears to really fear outright. I’d give anything to see any kind of wolf in the wild! (I hear there are a couple of packs in Northern Cali…)

Hi Chris
Wow that must have been a great experience!
Here in Switzerland they recently decided that hunters are now also allowed to shoot wolves in the zones where the animals where in the protected zone…

Sometimes we meet traces of wolves. Less often - the results of their activities. 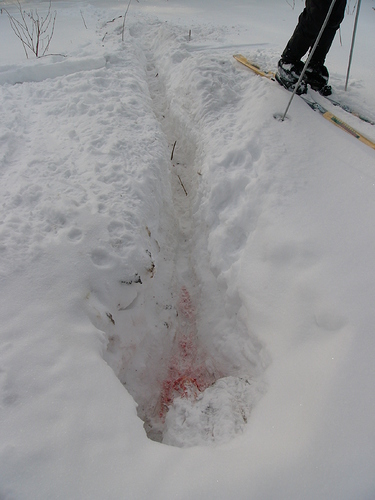 I’d give anything to see any kind of wolf in the wild!

I don’t, I’ve seen them many times chasing on TV documentaries and the only thing I wouldn’t like when being in the mountains is being found by one or -even worse- a pack of hungry wolves. I believe they are usually not interested in humans, but, depending on their hunger, their priorities might change and I wouldn’t like to be there to experience that on me.
As far as I know, there are not wolves in the West of the Pyrenees mountains currently. I’ve heard of one or tow bears but not wolves. The bears are so few that I haven’t felt any reason to worry about them. Should some day packs of wolves were living and hunting in this area of the Western Pyrenees, I think I’d seriously consider the idea of not going there.
Cheers,

Opportunities for wildlife viewing are one of the benefits of SOTA! It sounds like many of us have been blessed with those sightings.

In September 2018, I was activating McCaslin Mountain in northern Wisconsin (W9/WI-011, an area where there are several identified wolf packs. As I was operating, something caught my peripheral vision, and I turned to see an entire wolf pack pass about 50-60’ from my OP.

I realize we typically aren’t on the wolf menu in all but the most desperate situations, but I was a bit concerned when 2-3 wolves returned near me. I decided it was time to pack up and hike back out ;-). Scott WA9STI has extensively studied wolves and told me the returning wolves likely were looking for pups that had been separated from the group. I recalled hearing some noises consistent with that explanation.

We also have black bears in the same area, and I’ve seen several over the years near our cabin in NW Wisconsin. However, I’ve not had any bear encounters during activations (yet).