This event took place on August the 1st 2021, and after collecting all data here it’s a report.

For third year in a row, we proposed a massive SOTA activation from many different summits running in VHF FM. The objectives we set were:

1. Planning the event
We started the project with an open invitation to prepare all details for this event. A group of people joined and we identified a date and target summits; this took a lot of talks and discussion to get an agreement.
Then we published the plan in the SOTA reflector and in other ham forums inviting some others to participate. At a point, when we were close to the date, we assigned frequencies for every activator to minimize interference and to make feasible chasing them.

The previous week weather was a bit unstable and we decided for safety reasons to move the date a bit and the event was finally held on August the 1st 2021.
We are very happy with the results achieved; there was a lot of people involved participating, and a few unexpected additional activators joined the event in the last minute.

2. Band plan
Making the allocated Simplex FM frequencies useable for all the simultaneous operators that would meet on air was a bit of a challenge. We decided to assign 16 fixed channels between 145.200 a 145.575 MHz, espaced 25 KHz, so that we wouldn’t interfere with the assigned frequencies for relays or other modes. Then we distributed such channels between the participants.
Due to the fact there were more than 16 participants we assigned some of them to a single channel choosing well separated activators to avoid hearing each other and minimizing the mess between chasers.

F6HBI, Gerald, joined again this year, and we set 144.600 MHz for him to avoid the huge interferences he found in the past in 145 MHz simplex range.

3. Activators list
There were 43 EA summits activated simultaneously that day on VHF FM, spread over 23 regions in Spain, plus 1 from France (F6HBI) and 3 in Portugal.

These were the activated regions in EA: 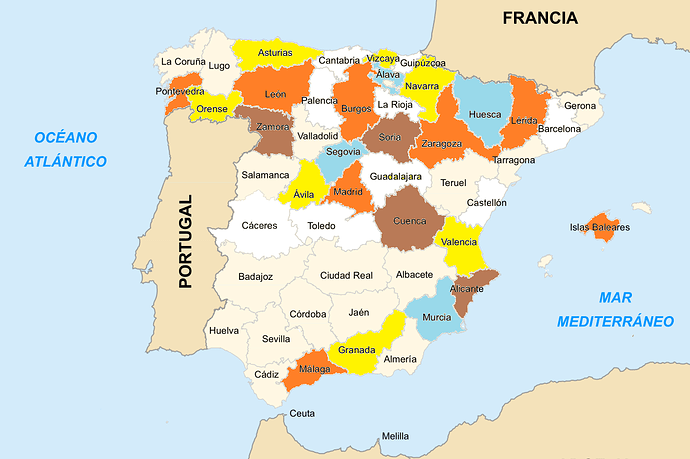 And here the complete list of the activated summits: 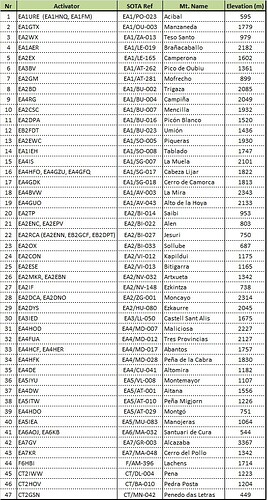 Now the map with references of the activated summits: 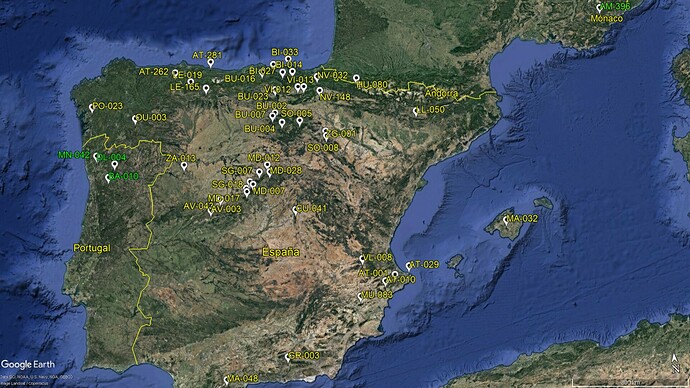 4. Distances achieved
Here you can see the bigger distances in kilometers logged in this event.

As you may guess, summit elevation, antenna and power used, obstacles surrounding each mountain and tropospheric propagation influenced on the results for any of the activated summits.

The majority of long distance qso for every activator were S2S contacts between portable operators, as their path was improved by a high elevation in both ends.

On the next chart there is a summary with all 3 longer distances achieved from any summit (only contacts higher than 100 km (62 mi) are shown in this chart). 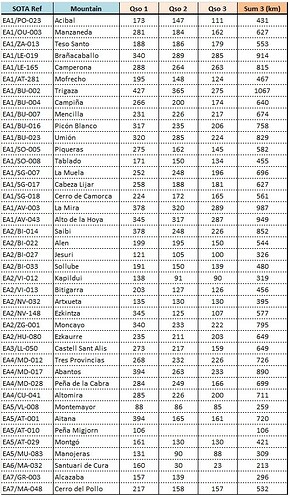 5. Summary of QSO and S2S contacts

Analysis of the qso logged by all activators in the event that morning shows a total of 1312 qso.

This chart summarizes all qso logged plus the S2S from each summit: 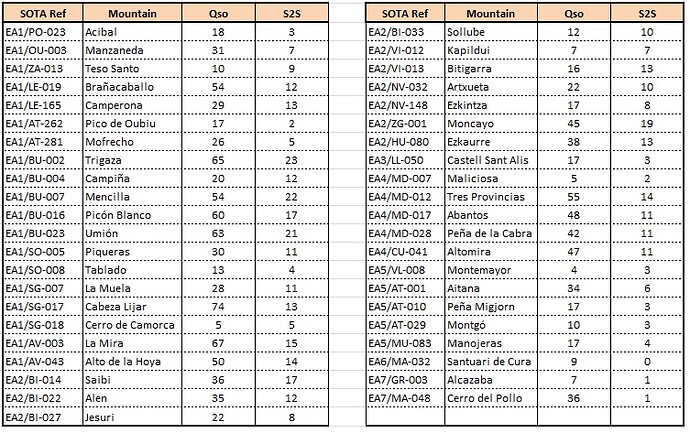 We hightlight here the more distant S2S achieved, enhanced by the height in some of the summits and the path between them:

This map here below shows the more representative S2S qso of the event (longer distance); not all have been included as if it was the case the crowd of lines would cross and make it difficult to distinguish paths: 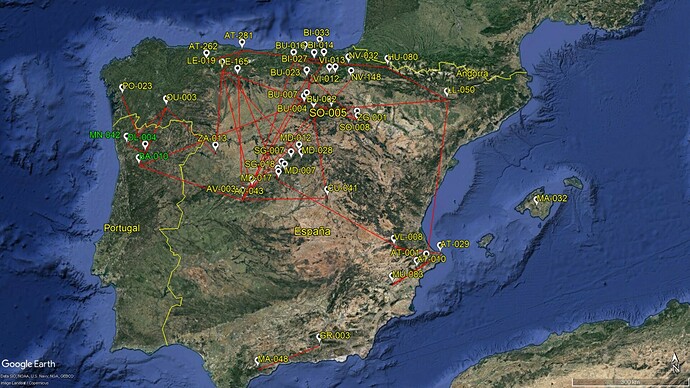 6. Operators abroad EA
A brief credit here for F6HBI Gerald, who has participated in all 3 editions so far. He was there up activating again this year but unfortunatelly he couldn’t make it through to get any DX this year. It’s a pity in this edition there were few activators at the optimum range for hime. The EA6 activator could have heard him but the chosen summit was very bad with a huge RF overload making the S2S not possible this time.
Thanks Gerald for being so suportive this past years with us. Look forward to get more stations involved in the Eastern part of EA in the future to make this qso feasible.

In the other hand we meet 3 unexpected ops from Portugal, CT2IWW Paulo, CT2HOV Nuno and CT2GSN Joao, that made possible to have international S2S this time. Thanks all so much.

Thanks everybody for supporting this activity and promote such a good vibrations in the band.

Ps: I post separately some pictures of the gear I used during the event

I had activated this summit back in 2014. This one was a good choice for the VHF activation, well placed in EA to be able to reach many other activators in the event.

I decided to bring two antennas , therefore I prepared a minimal setup this year:

The access was easy, and I arrived in the summit early to assemble all the gear. 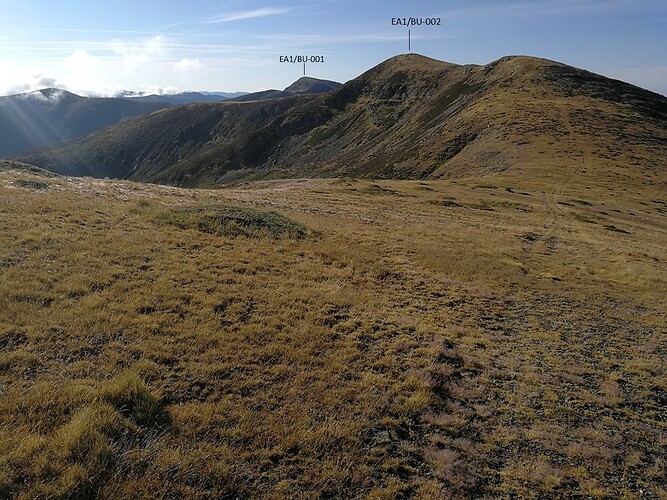 WX was okay, and I was glad to find the summit free from fog (only in some other peaks next to me) and a gentle breeze, not too cold, although I put my extra layers to be warm enough.

I spent the next hour assemblying the yagi and the 2 stacked loop array (mostly omnidirectional): 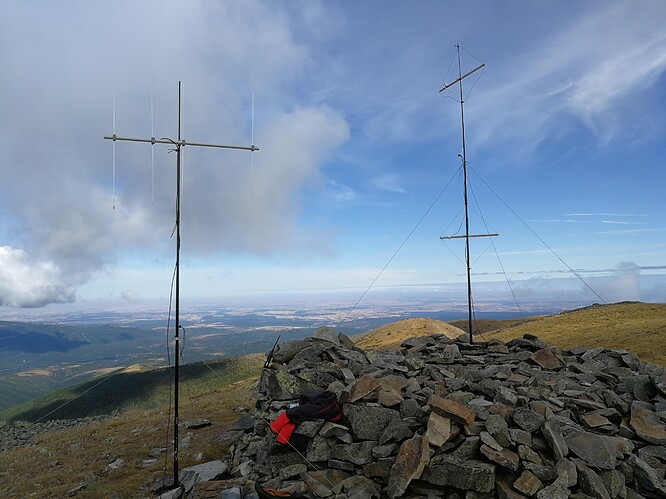 I put both antennas close to my operating position and I could rotate the yagi by hand easily.
The yagi is made with a PVC pipe and 4 alu rods, 4 mm thickness. It is a direct 50 ohm feed: 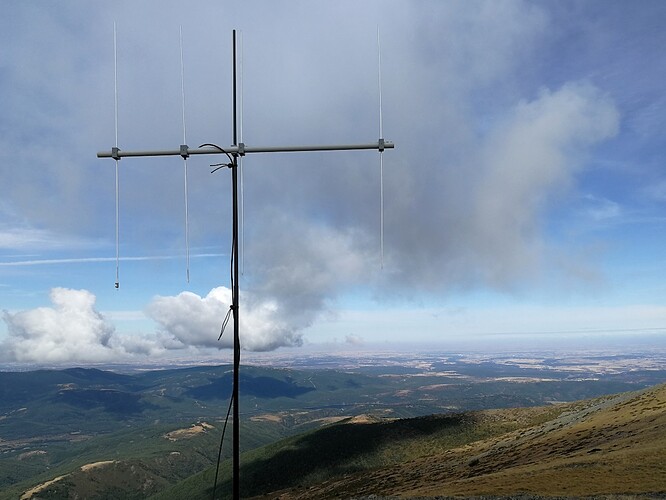 The loops are made with wire and a wooden dowel. I use some elastic bands to stretch the wire and form the loop. There is a coax choke on each, and use sections of 75 ohm cheap TV coax to stack them and get the 50 ohm match: 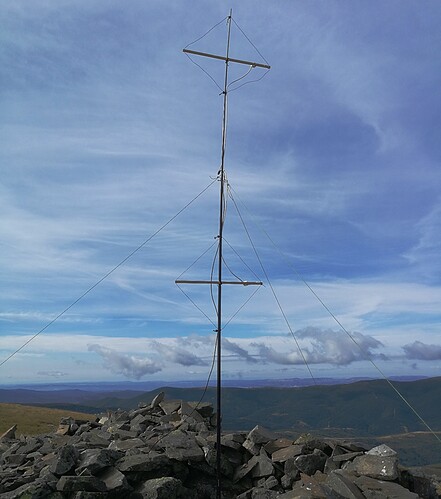 Both antennas area easy to carry and I use them combined for omni coverage or pointing the yagi to get a longer distance qso.

I put the handhelds over the rocks and the amp to start the activation: 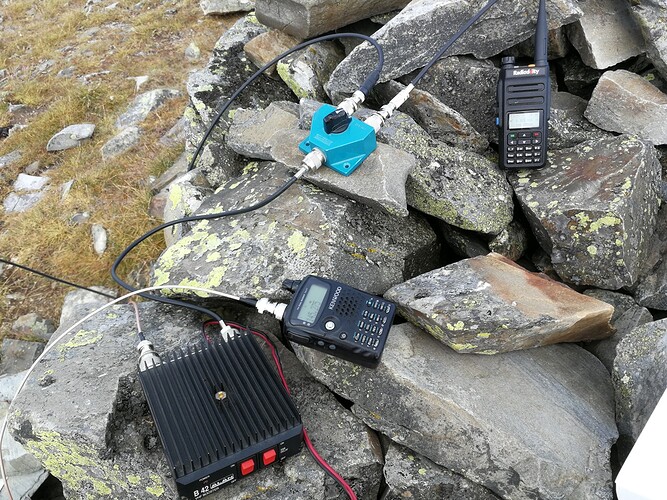 The band was so crowded with stations that it was a very enjoyable VHF activation, logging 65 qso with ease.
Every now and then, when my pile up was lower I did brief QSY to search and work some S2S and it was great to grab 23 different summits from many diferent associations.

At a point, I heard Nuno CT2HOV station calling some other for a S2S and then he disappear, what a pity! But to my surprise, some minutes later he called me in my CQ frequency, and was patient enough to complete the qso exchanging the references, despite some dificulties due to QRM from a near station.
That was a 427 kilometer qso that made me very happy.

In the other hand it was a pleasure to be able to meet on air with many of the operators that I had talked to on the previous week while planning the event.

The battery of my TH-F7 was exhausted and I replaced it by using the Radioddity, and although I could continue for some time, I felt the RX was much worse compared to the Kenwood. This is something I had previously confirmed in some other events.
After a 2 hour 45 minutes activation, I went QRT and packed.

Most of my SOTA activation is done in HF, but participating in a VHF event can also be fun and very rewarding. Simplicity of gear to run VHF on a summit is an easy way to attract new activators and young operators.
Look forward to repeat next time.

Thanks Ignacio for your VHF activation success. Especially the details of your planning. I found that has given me great insight in how you went about the planning.

It was a big challenge ;)… I’m glad to see our hightlight contact, it was a good distance… next time I will more prepare, hope WX permits.

the details of your planning

Hi Geoff, planning an event like that is complex: many people to organize, many different opinions, side aspects to consider like the weather… But in the end when we all agree it is great and achieve a lot of fun together!
Most people involved in this event homebrewed their own yagi beams and it was fantastic to see they all worked fine.

Was this event perhaps the bigger on air meeting on VHF ever held within the SOTA community? We are looking forward to repeat next year.

next time I will more prepare

Hi dear Nuno, it was a nice surprise to have our qso, and I’ll be glad to repeat again next time!