I was browsing our Czech mapping portal, which is the best resource for topographic (so called hiker maps) for Czech Republic and I have spotted they now include whole Europe!

This map provides extreme detail for our country, including narrowest, barely noticable footpaths and our famous touristic marking as well as cycling paths. As it looks so, it now provides this level of detail for most of the European countries. 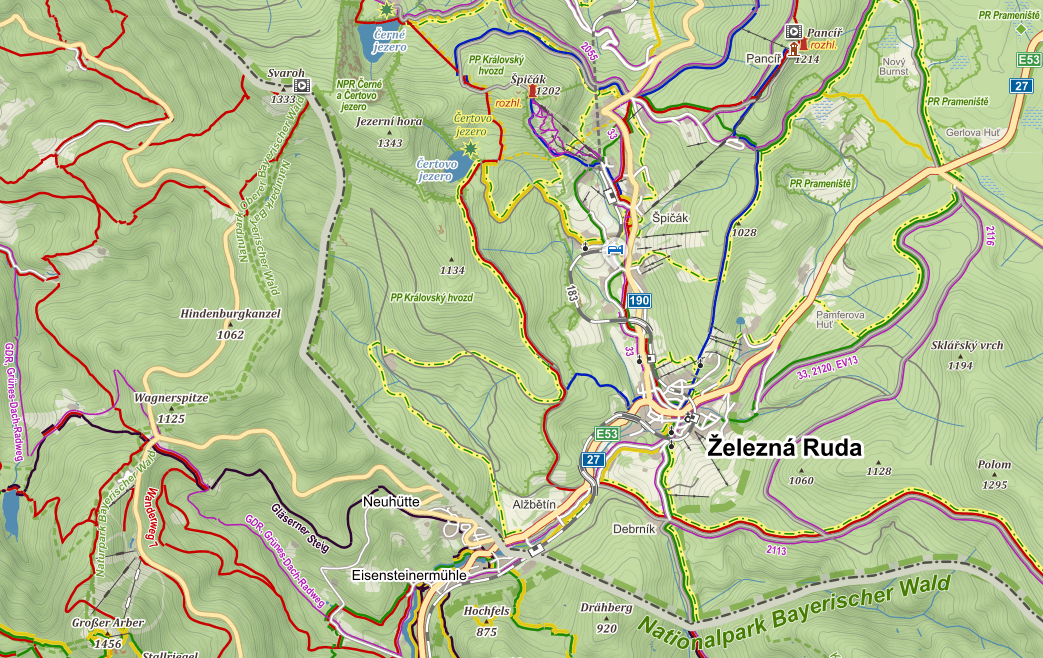 I hope you can make use of this. By the way, there is an Android variant of this map available for download in Google Play:

Mapy.cz by Seznam will lead you through the whole world. You can take your device anywhere in the world with you. Thanks to the tourist map you know about every trail and bike trail and you won’t miss a single castle, outlook or other attraction. In My maps you can save your places and routes to files. Then you can easily sort them by trips or share them with others. You can display restaurants, ATMs, stations, accommodation and other places that may come in handy. There are even parking zones a...

This allows you to legally download offline full-detail vector maps for countries you choose!

Hope this helps. I would be interested if there are any other national sites like this as Google Maps or OSM is usually just not enough.

Thanks for the link Marek.

Perhaps I am mistaken, but I think this is OSM-based (outside of OK/OM). The rendering looks quite nice though - perhaps a little clearer than Open Cycle Map.

OSM is usually just not enough

They are using OSM as a major chunk of their source data (look at the copyright notice in the bottom left). Its just a nicer presentation layer

In fact, I think it is by far the nicest OSM rendering that I’ve seen yet, given that the others don’t seem to be able to do contours without making everything else look worse.

I was wondering about nice online hiking maps for the rest of Europe and was intending to post a thread on this at some point, but now you’ve got there first, so here are the ones I’ve used in the recent past:

Some of these offer mobile and offline options, which I haven’t tried. I generally use paper maps when I’m offline, but I do sometime use OsmAnd (which is, obviously, for OSM on Android) and also openmtbmap to generate maps for my garmin GPS which are much better than the topo maps that Garmin have sold in the past.

I’ll give this a bash on my gash Android phone and see how it compares to OruxMaps which is my current favourite OSM viewer on Android.

for austrian maps you can go to:

and here is a linkt to online-kompass maps:

My favorite OSM viewer is OsmAnd but you have to pay for Contour lines plugin.
Mapy looks very nice, will surely try it!

I installed the app on a MotoG 4G 1st edition phone and download the (colossal) German map. The app renders incredibly fast compared to OruxMaps but it does very much less. As simply a viewer it works and you can download the maps through the app and view offline. That is the minimum most of us need. OruxMaps does much more but it is a bit iffy getting the maps into place. This app looks very pretty.

I was also able to prove that the electron does indeed have mass. The German map is 2.3GB in size and after downloading that much by Wifi my phone was quite warm. I reckon this heat comes from the impact energy (0.5mv^2) of all the electrons in the wave/particle duality that is the Wifi signal hitting the antenna!

Marek, thanks for the info about this.

Here’s a Hiking map site for Germany (and surrounding countries) that you might like to take a look at - this is the English version:

http://www.wanderreitkarte.de/index.php?lang=en
It is based on data by OpenStreetMap and elevation data by CIAT and NASA.

That’s very slow Ed, they need to pay for more BW and faster hosting. The mapy.cz is one of the fastest I’ve seen. They’re all rendering the same data from OSM.

It’s fast here - must be on the same ISP clustered bandwidth as my ISP I guess.

It’s slow when I access from anywhere. I can appear onto the net in Edinburgh or Munich or Mountain View or Zurich or Reykjavik. The Zurich VPN gives me about 9mbps, Edinburgh/Munich 60Mbps, MV is about 2mbps and Reykjavik is 13mbps. So I think the slothiness is far not near but it could be temporary. I’ll try it from home later where I get 210mpbs.

If anyone wants to test their ISP download speed you can try this Netflix performance checker. http://fast.com

I guess this is a case of YMMV - with me the Czech site is not faster than the German one and it is set to show less features - for example the german one has busstops marked on it, but the cz one doesn’t - I’m sure it’s a function that can be turned on but as I don’t understand Czech, I don’t know where to be able to make the changes to do a correct side by side test.

I’ve just seen that my driveway is indicated as a public road!! But that’s the same on both websites - it’s the OSM data.

If anyone wants to test their ISP download speed you can try this Netflix performance checker. http://fast.com

Thank you, Andy; very interesting. A reluctant 18 Mbps but I get nothing like that when downloading from a real website.

That’s because you’re probably stuck behind your ISP’s grotty http proxy. On non-common websites, I can regularly max out my 210mbps connection. Things like bbc.co.uk, no chance. It also depends if the website is just serving static data or if there is a ton of backend scripting running in one of the many write-once-crash-everywhere languages!

It’s slow when If anyone wants to test their ISP download speed you can try this Netflix performance checker. http://fast.com

Now I’m curious, tomorrow I must try that map at work with the 1Gb/s

I agree with you Andy, it’s quite slow generating tiles.
Once the tile is ready it probably cache it: if someone else ask for the same area at same zoom level it answers fast
Anyway I must say that the result is very nice.

BTW http://fast.com is also not that fast: it never gives me more than 330Mbps and I have about 600Mbps free at moment

BTW http://fast.com is also not that fast: it never gives me more than 330Mbps and I have about 600Mbps free at moment

Anyway we are now OT, sorry