Morning one and all

Bringing up a subject here as some times a sota activator whom no use P for portable.

Thing is from what i understand of the Gen UK ruling of stations location if you use your straight call sign as in this case M3FEH i am operating from me home address registered address. So if your out on the summit to which is not your home address station registered surely you should be operating with a P at end of your call with location given every so often say in this case M3FEH/p at G/DC-003 Kitt Hill.

Same as at another address of another ham other than your own is addressed as M3FEH/A or if mobile M3FEH/M. Does this ruling cover other countries of the world

To paraphrase the wording of the licence, it says that you MAY use /p, /a etc, but it doesn’t say that you must.

It’s become usual practice to use /p for SOTA activations but there is no legal requirement to do so.

As the other Colin says, it is optional in the UK. In some countries it’s required and in some it’s forbidden.

Colin (the other one)

just found this on the ofcom page

M3 Foundation Licence stations can operate anywhere in the UK. I have seen it reported that Bulgaria accepts it for CEPT but that would need confirming.

The abbreviation that everyone is going to understand for Top Band or 160 metres is 160m and certainly not 160mb. As an abbreviation, that will be read as 160 megabytes by many if not most people.

Karl, I assume you mean 160 Metres (1.8MHz). Foundation and Intermediate licence holders are allowed their full power limit on that band, apart from between 1.850 MHz to 2.0MHz where Intermediate holders are limited to 32W.

160mb. As an abbreviation, that will be read as 160 megabytes by many if not most people.

They would be reading it incorrectly, then. 160mb would be 160 millibits. The abbreviation for 160 megabytes is 160MB.

The 1 watt limit for Foundation, Intermediate and Full licensees refers to the 0.1357 MHz band.

thanks guys yet again

The abbreviation for 160 megabytes is 160MB.

It is but is so frequently incorrectly written as mb that the two are de -facto interchangeable. We wont touch on the fact that all old school computer types know kilo means 1024 for computing and 1000 for other uses. That only needed clarifying due to marketing types selling short measures of disks and claiming they were not taking the mick by using the unit in its correct sense. What’s funny is that in 36 years of work and university experience and some 5 years of devouring all written work I could find on computing before university, I never found kilo or mega used for anything other than 1024 and 1024^2. Switching between electronics and computing, everyone, just everyone made the context switch between 1024 and 1000.

MB to me is Meter Band and also Mega Bytes as in computers.
But better still MORE BEER

An yes did read that wrong the bottom of the freq chart from off com
That,s another thing learnt did not know we have a band down there let alone Foundation licencees allowed there. What sort of prop can you expect down that low and best time of day and hell mind boggles on size of antenna required

Hang on that,s below LW, don’t submarines op down there or used to.

I wondered what /A meant when I logged a chaser the other week back. Now I know.

I have seen it reported that Bulgaria accepts it for CEPT but that would need confirming.

Hi Andy,
I wonder if Bulgaria have now signed up to EC recomendation Rec05/06 that “Novice” licences could operate in countries that are members of the defined arrangement. This is based on two levels of licence which would mean that Intermediate licensees would be able to have the simplified reciprocal licencing. Full requirements for a liecence to be compatible with this Novice level are given in EC Report 32.
Neither Ofcom nor ACMA have signed up to this agreement, so it does not apply for UK or Australian licenced stations, and does not apply to foundation licences in these countries in any case.

Here is the list of countries that were inital signatories to the Rec05/06 agreement (note the different prefix required when operating as a “novice-reciprocal”): 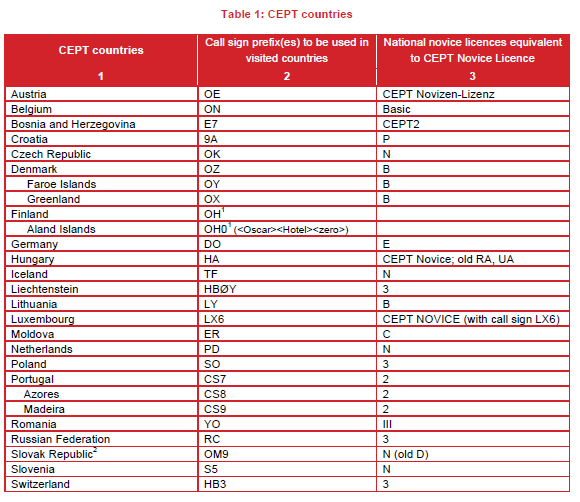 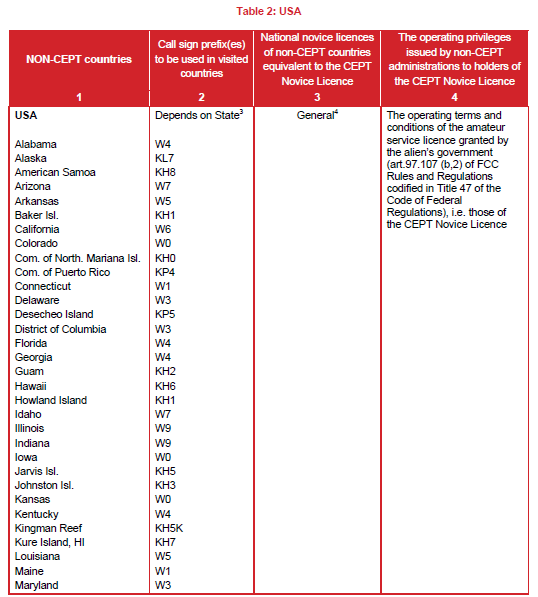 I don’t follow a lot of the changes in licensing that apply to the other licences but do recall someone writing about Bulgaria and FL. This could be 10+ years back.

At the end of the day, it’s up to the destination country to decide whether they will accept an applicant’s qualifications to grant them a licence … and there’s nothing the UK Regulator can do about it.

Not sure of the origin of 32W, no doubt someone will know !

Not sure of the origin of 32W, no doubt someone will know !

Maybe someone thought 15 was a nice round number

The power on Top Band has been adjusted a bit. It was low for a long time 10 or 15W then the limit was raised to 400W on a section of the band. Then OFCOM sent the wrong docs out making it 400W on all the band instead of 400W in part. Then OFCOM rather than doing what the rules say (notice in the Gazettes) to make the power limit what it should be they asked everyone to obey this request. You could have run 400W legally. Then it was fixed with one of the licence updates.

Again, since I was licenced in 1990, the power spec has changed from Watts to dBW to Watts or dBW. When you had to keep a log by law, you had to record it in dBW. For those who couldn’t chew gum and walk at the same time, this was too hard hence the return to Watts or dBW.

Anyway, when they changed the power limit it was meant to be 15dBW. Now they give both you get a nice woody number 15dBW and a nasty tinny number, 32W.

I do have every paper licence and every copy of the old BR68 and NoVs ever issued to me. But can I find the old ones? Nope. I did find all the bits of sticky copper foil I had mislaid, a pile of OSCAR News from the early 90s, an original vinyl 45 of Monster Mash By Bobby Pickett from 1962, a reissue of The Isrealites by Desmond Dekker from 1975, a stack of A4 Manilla envelopes, a circuit diagram of an 80186EB based processor & IO card from 1996, numerous copies of intriguing antenna designs. And finally, the 100pF vacuum variable capacitor. Bought as a NOS item, it fell off the shelf and now intermittently shorts out. To say I was upset when that happened would be an understatement.