Sadly I’m not on a summit but using just 10W and a Slim Jim antenna I’ve managed to be heard in the US on FT8 for the first time just now. The hits in the US are all very close together. I’m hoping for a reply but just to be heard was interesting. 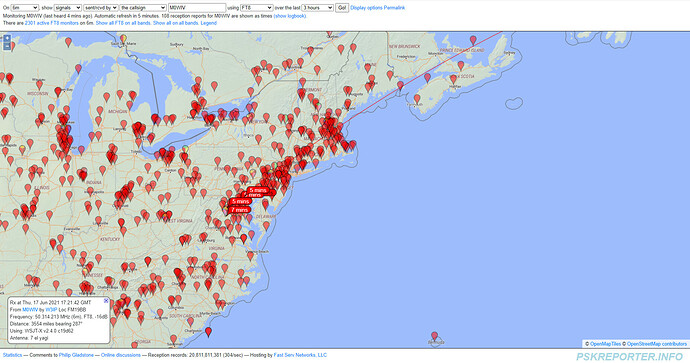 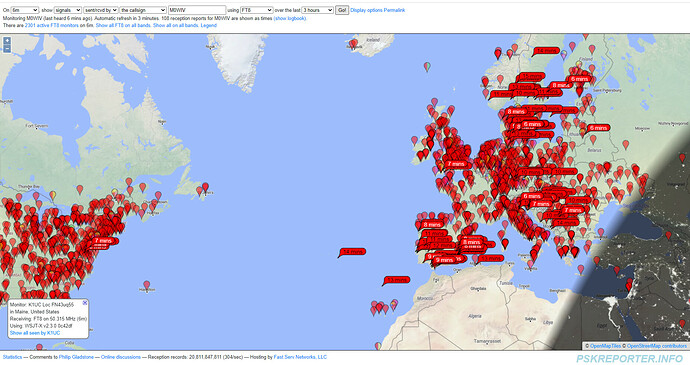 I was on 6m last night from home. 50W into a five element beam and European stations ripe for the picking. Only on ft-8 however. No one was on SSB.
I’m guessing everyone just collects grid squares now and it’s much more efficient to do this via ft-8.

There’s usually CW activity around 50.085 to 50.105 whenever the FT8 frequency is lively. Always worth a check down there. I worked USA without needing FT8 this way recently.

I haven’t been on 6m since several years now, despite that it is a magic band.
FT8 has killed almost any other modes and you can call for hours in CW or SSB without any answer.

Active since 1974, i never thought possible that i would run away from the bands !!

I haven’t got the patience to sit for hours and do that. One of our club members has collected nearly 80 different countries now on a range of bands using FT8. I just turned it on this evening as the Propquest website showed a very high probability of ES. To reach the States must be several hops.

The current conditions may explain why driving yesterday afternoon and listening to FM on the radio I heard French and Spanish stations when I scanned. One blotted out classic FM for a while.

Thank you, if conditions are similar tomorrow I’ll try CW. Might be a struggle with 10W from the home QTH but worth a try.

A 9A1? could be heard for 1 hour, otherwise nothing except FT8. I’ll try again tomorrow.

There’s usually CW activity…Always worth a check down there

I do find it annoying that 99% of the activity on 6m is now on FT8. There were many large signals on 50.313 MHz throughout much of today which normally means it is time to change mode, but I couldn’t get any response on either SSB or CW, or indeed hear anyone. A few days ago it was thankfully different with CN8 and ZB2 worked on CW. I also had a nice chat with a guy in south-west France on SSB and a new square as well. I just wish a few more would press the key or the PTT rather than click the mouse button.

Yes you are right. At least the FT8 signals show me a possible band opening. Better than nothing.

Get on a SOTA summit Gerald. Amazing how quickly activity then bubbles up on YOUR choice of band and mode

Pom, I’ve read about your successful activities on 4m. Compliment.
I think you’ve made peace with your IC-705 by now, haven’t you?

I’m in the process of building a 6m transverter for my KX2.

Pom, I’ve read about your successful activities on 4m.

However I wasn’t on a SOTA summit, but on a local p<150m peak using my SOTA setup (well, some kind of).
Guess, what signals were in the band! I heard OZ7IGY, some EI beacon (that I could not identify due to my miserable cw skills), and FT-8 signals (sic!). Not a single phone or cw signal except the beacons. CQing didn’t change this.

When the band came alive, it was only OIRT FM-W stations splattering across the entire band making any qso impossible. This opening luckily ended shortly before 1900z.

Then, within a minute, when the UKAC started, the band was crowded again, this time with strong SSB and cw signals. Good to know that you can rely on the UKAC stations even on 4m. I worked an EI and a MM station and then started CQing which resulted in a pile-up from the northern UK. 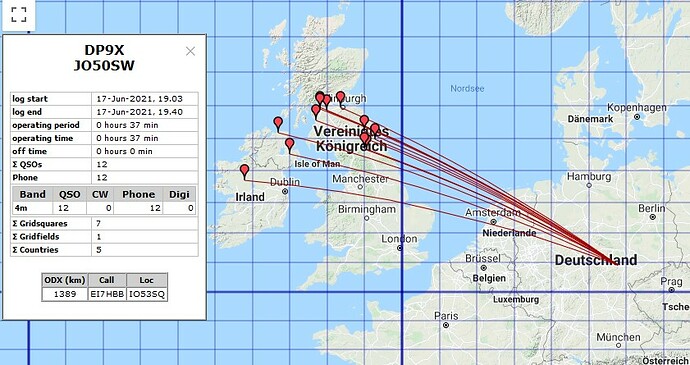 The IC-705 is so much fun to operate in the field and she’s a lovely radio having a wonderful RX, however with some disadvantages, e.g. a mic that is prone to wind noise. A TRX designed for outdoor operation and the mic picks up the lightest breeze…

The reason for the first impression of the bad VHF RX was caused by a local digipeater with a poor LO spreading extraordinary noise level across the entire 2m band. This certainly resulted the IC-705 to overflow.
Anyway, maybe I will be posting my overall positive experience with the IC-705 in another thread.You just gotta love her.

I used the IC-7300 since she is the only TRX capable of 4m I have at the JO50 QTH. When packing the rucksack, I found out that the handmic was still in the JO42 shack. So I had to use the SM-30 desktop microphone, which felt a bit odd on a hilltop. 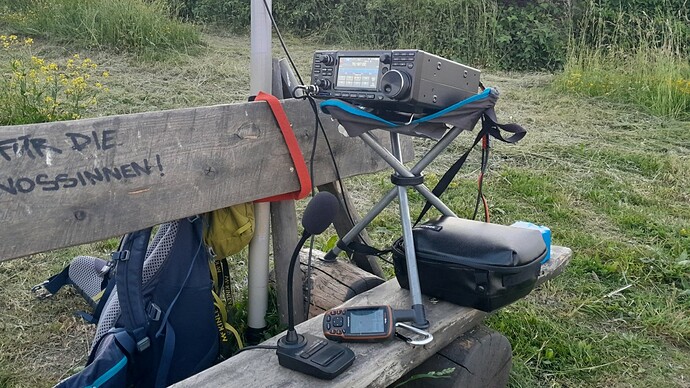 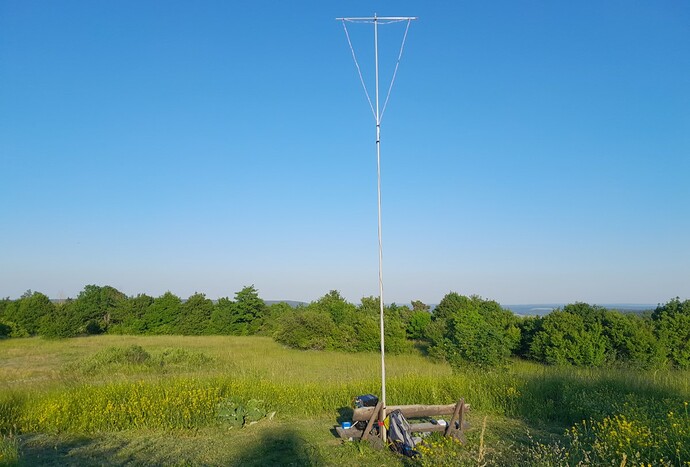 Tom, you should know by now that I don’t dance to that tune. Working regular SOTA chasers is my priority and has a much higher value to me. My selection of band and mode is made to reflect that. Hence while Paul “takes care” of the UK / near EU chasers on 60/80m SSB, I cater for those that prefer VHF or CW by running 2m SSB and 30m CW. The dilemma comes when I am out on my own when I can try to do too much.

As far as I am concerned, 6m could be open to the whole world and I would still prefer to contact the regulars. Perhaps that’s what comes from being licensed for over half a century.

Sounds like a chicken vs egg debate that Gerald. Full marks to you for serving the perceived preferences of the regular chasers, but what about potential new chasers? And trust me, if you do YOUR choice of band/mode, the chasers will come to YOU.

Working regular SOTA chasers is my priority and has a much higher value to me.

As far as I am concerned, 6m could be open to the whole world and I would still prefer to contact the regulars. Perhaps that’s what comes from being licensed for over half a century.

Well I’ve clocked up 58 years as a ham, I like to chase the regular activators, too, just as you like the regulars to chase you - but its also nice to get new potential regulars. A chase is a chase, for its own sake. As for 6m being open to the world, it is about twenty years since the last major world-wide F2 opening, and if I live to see another one I will certainly not be blase about it!

if you do YOUR choice of band/mode, the chasers will come to YOU.

And there are some chasers out there supremely adept at this. One that springs to mind (although there are many others) is Jose @EA7GV who seems to be able to work on whatever band I activate on (40m to 6m), and in any mode - SSB, CW, FT8, FT4. It is great to work new callsigns through “varying it up a bit” though, and the opportunity to attract more participants into SOTA is considerable.

That said, I’m still having the most success with talking long-time licensees into commencing SOTA chasing, on good old 2m FM. It’s surprising that there are still lots of active stations on 2m FM that haven’t yet dabbled in SOTA over the last two decades, but I’m still recruiting regularly via this part of the spectrum!

Well let me tell a secret.

For the last three years a handful of VK3, VK5 stations have been working into Europe. On 6 m In June. OK it’s on FT8. But it is there. 100 W is enough. It’s a bit like the regular 6 m openings into South America from here in December.

The secret is having a low angle of radiation. 5 degrees or less. That is most easily achieved by being on a sharp ridge or peak with a beam. 7 elements is good but you could loose a couple and still pick up a few juicy ones.

It’s short path around 0500 UTC. Multi Es and F combined so openings are short and the footprint moves about a lot. Signals are good FT8 strength, for those with the right gear. Not quite CW levels.

Ron, did you read the latest EI7GL news?