Sat on a drizzly G/SP-013 making plenty of 6m QSOs around EU with 5 watts. FT8 atm but will do CW at some point before heading home for a beer with @M0HGY and G vs GM on the telly.

I was out /P this afternoon on a non-SOTA hill close to my QTH, field testing a new moxon and managed SSB QSOs with EA3, Italy and 9A plus CW with Italy and heard VO1FOG on SSB 53/4 with a large EU pile-up. Its a shame people just use FT8 when the band is open like that.

Quite a lot of activity on 6m this afternoon including an SSB contest. There was CW activity going on too but all far too fast for me.

I tried a CW CQ call anyway and started a QSO with someone in Italy but lost them before we could complete.

I need to sort out a better antenna as my vertical isn’t much use for shorter ranges and only works if the signal is refracted by ES.

I’ll be heading out for a late night activation tonight hoping to participate in the 50MHz Trophy and take advantage of the FB condx.

Because I’ll be putting in a contest entry, I can’t self spot (although the RBNhole may find me on CW), so you’ll have to hunt me down. I’ll post an alert once I know which callsign I’ll be using.

Thanks to your ‘first CW activation’ report John the other day, I plucked up courage, plugged my straight key in and managed a (slightly ropey) CW contact in todays contest - first in 35+ years!

Hopefully be able to get my first chaser contact in on CW soon. Thanks for giving me the push to get started

I plucked up courage, plugged my straight key in and managed a (slightly ropey) CW contact in todays contest - first in 35+ years!

With the best 6m Es season in recent memory coinciding with the 50MHz Trophy Contest this weekend, I had a cunning plan! After the evening Euros football match on the telly on the Saturday night, I headed out for The Cloud G/SP-015.

First job was to pitch the backpacking tent. I walked along the cliff edge path on the summit area and looked for a tent-sized patch of flat grass on which I camped and had a great night’s sleep last time I overnighted on The Cloud. I got to it and it was all bumpy and lumpy, to my abject disappointment. I quickly scouted around for alternatives, but there weren’t any to be honest, so I pitched my Karrimor backpacking tent in that same place. I then set up the SB6 (SOTAbeams 6m Moxon) on a SOTA Pole with an old guying kit. Too old as it transpired.

As feared, it was pretty uncomfortable in the tent, and for the next 12 hours or so I failed to adopt a comfortable position either while sitting or lying down. I was QRV by 2253z and immediately worked GM2T who was very strong on 6m CW. Soon after, I then worked 9A9R, also on CW, and then GW4D. This only raised false hopes though, as the band was rapidly closing down. A couple more were worked and then nothing could be heard anywhere on 6m - not even on 50.313MHz (the FT8 frequency).

It was very windy outside, and my heart sank when I heard the unmistakable sound of the mast crashing over. It had just started raining quite heavily too, so I was going to have to put my boots back on, get cold and get wet - not part of the grand plan. The issue was quickly diagnosed, but not quickly solved. One of the guy strings had come away from the guying ring. Problem was it then took me over ten minutes to find where the errant string had gone. Searching amongst heather at night in rainy mist - when you’re colourblind - is taxing to say the least! I did, more than momentarily, consider abandoning the plan and returning home to my warm comfy bed!

Eventually I found it, made the repairs, and got the antenna back up again. Back in the tent, I now needed to remove all my outer garments, which were now damp, and get into my sleeping bag. I placed all the removed clothes into a large drybag and fastened it up. This might not do anything to get them much more dry, but it would certainly protect them from becoming a lot wetter as a result of the coming dawn’s condensation! (Yes, that’s a mistake I’ve learned from!)

I tried to get off to sleep, but the bumpy ground beneath my foam sleep mat had other ideas. I decided to try my trick I do at home (if going to bed earlier than my wife) - listen to BBC Radio 5 Live, and the conversations about issues in the news, with listeners calling in to contribute. The presenter on air was Jim Davies. I didn’t want my FT-817 shining its backlight or playing broadcast audio all night though, so I went into the main F menu to turn the backlight off, and to look for an APO feature. I’d never used APO on an FT-817 before, but sure enough, the feature was there, and I set it for one hour, which was the shortest available option.

I woke up as it first started to show some signs of getting light around 0245z. This wasn’t too bad a result, as it indicated I’d actually had around 2.5 hours sleep - a fact later confirmed by my Fitbit tracker watch. I turned on the FT-817 (yes it was off - so the APO function had worked) and had QSOs with F4FET/P in JO00 and G8T in IN79 - always nice to get that continental-sounding square from The Lizard!

Other than those two, the band was silent - including 50.313Mhz - so I switched off again and tried for a little more sleep. I managed another 20-30 minutes - all “money in the bank”! I was ready to operate again by 0440z and G8XVJ/P was putting in LOUD CQ calls from Meryton Low IO93ad - practically above me! However, I tactically waited 9 minutes before picking up the microphone - that then gave me the full hour of “off-time” since my last operating session, so wouldn’t have to count the time as part of my six hours if entering the 6O section - whereas 50 minutes would have been wasted if I’d had called XVJ straight away.

Even so, things were really slow over the next three hours. A good variety of squares was worked - IO81, 86, 90, JO01 etc - but at the super-sluggish rate of four QSOs-per-hour! Enthusiasm was briefly restored with a couple of Ukrainian stations going into the log, but then evaporated - I was halfway through the contest exchange with YT1X in Serbia when loud splatter from 2kHz LF broke that QSO. A non-contest station in North Manchester was calling CQ in AM, and grumbling (perhaps with tongue-in-cheek!) about all the contest stations coming and wrecking the band! I decided to work the 6m AM station and log it as a SOTA contact, but also take the opportunity to request he allow me to complete with the YT station. He kindly agreed, but I didn’t get opportunity to finish the QSO before the AM calling resumed two minutes later.

Fortunately, later on, I found YT1X again and we did complete. Plenty of Eastern Europe stations were now getting worked, and my logbook started to look a little healthier. I found UW8SM running - a call I recognised as being a very regular current chaser in my HF activator logs. When I called in, he recognised my call too. I judged that he would appreciate my summit reference as well as contest exchange, and this proved to be correct.

The QSOs were now manily SE Europe, particularly the Balkans. I’d calculated that for my entry to be good for the 6O section, I needed to cease 6m operation at 1014z. As it was, my last three 6m contest QSOs - EA, CT and I - were at 0955, 1000 and 1006z respectively. The 6m FT8 was now buzzing louder than ever - but I couldn’t be mithered. I started the laborious pack away process - rucksack, antenna, tent, sleeping bag, rollmat etc etc. This took around 40 minutes, and is another aspect that should put me off overnight SOTAing, along with discomfort and sleep deprivation!

Six 2m FM QSOs were added on the handheld before descending from the summit. I returned home to a warm Fathers’ Day welcome from Jimmy @M0HGY, with card, mug of hot tea and a FB gift of a presentation box of fine bottled ale and posh pork scratchings! Just the ticket for watching the Wales Euro match later in the day! 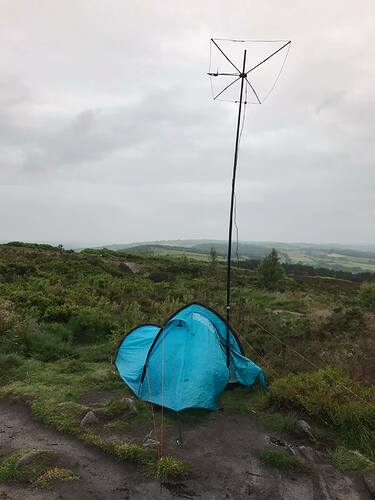 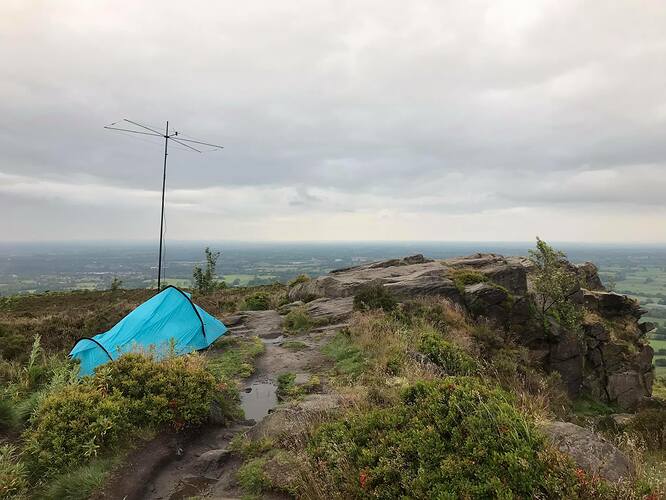 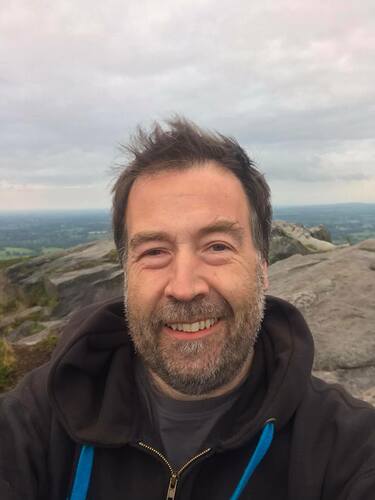 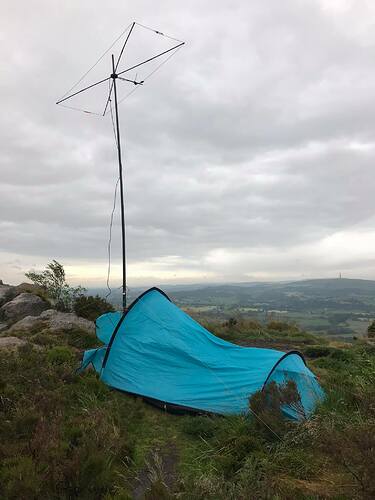 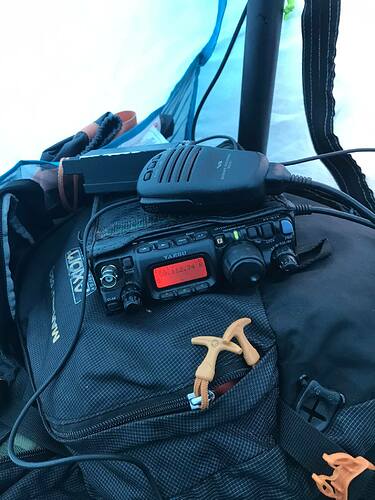 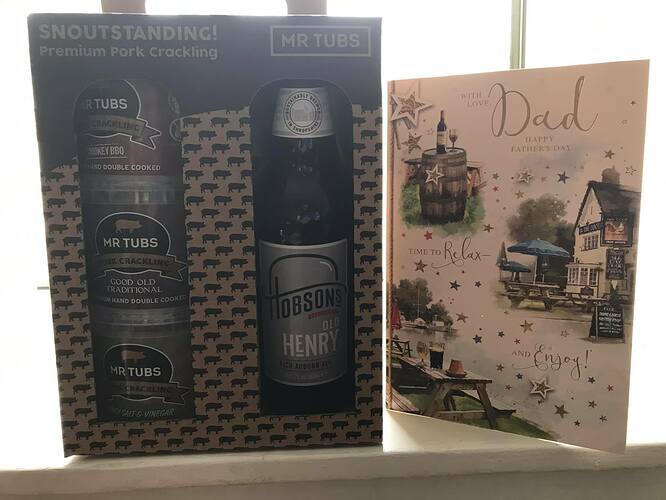 Hi Tom, great report and photos, with a nice surprise on getting home

A quick update - the 6m band seems to have opened up again, at least in Europe, and I’ve almost had a QSO on CW with an operator in Libya but my CW skills let me down. Activity seems to be around 50.095

Further update, it wasn’t Libya but Hungary! HA3HX - I thought the first H was a 5. No matter, my first CW QSO on 6m.

Hi,
Sadly I have to tell that I have quit on 6m. I was active on 6m with 5W QRP CW and I got nice results.
But nearly all operators changed to FT8. Now a nice opening on 6, operators in cw are rare and far between if you get my drift. The situation is so bad that it is not worth to put valuable on air time in it.
I replaced 6m with chasing SOTA/GMA/WWFF with 5W QRP and my small whip antenna. I am happy with my results.
On top of the 6m situation comes that nearly all 6m opening alarms are worthless because they relate to FT8 6m openings.