What I didn’t mention in my activation report REPORT - MM0EFI & GW(M)4BML on the high Cairngorms - #33 by MM0EFI
the other day, was that I turned my ankle quite badly on the summit granite blocks of Ben Macdui. And then did it again whilst setting up my mast. The next day I rested it and elevated it, as it had swollen up like a balloon and showed signs or bruising. Mo banned me from hiking - I was grounded until things improved.

Fast forward to Wednesday. We were day off and Mo had a hairdresser appointment in the morning. Told her I might just go out on my bike for a couple of hours…

0900 BST 0800z and I was pulling up at the parking area and access point to the wilderness that is Glen Avon (A’an), near the highland village of Tomintoul. 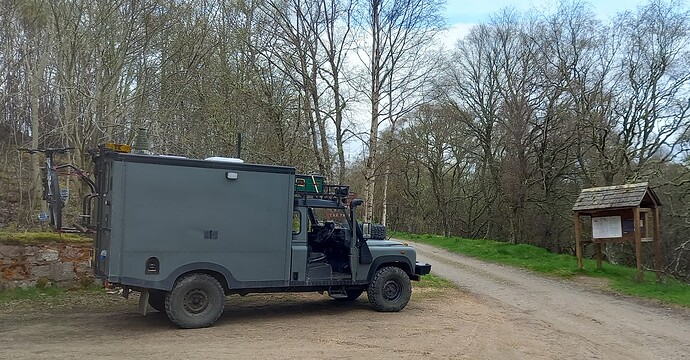 I’d taken Dora out for a run because the propshaft on the 110 had started to destroy itself on the run home from work the previous day.

The 10km route to GM/ES-040 is shown on the OS 1:50,000 as Land Rover track throughout. Of course, gradient and track surface would determine how much of this was rideable. 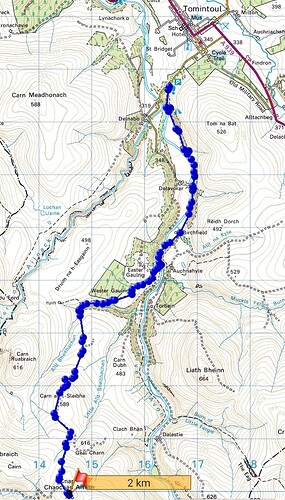 Unfortunately the first part is downhill, dropping down to join the River A’an. Then more ups and downs, before coming to the estate entrance at some foreboding looking electric gates. Not to worry. There is a marked pedestrian gate alongside. 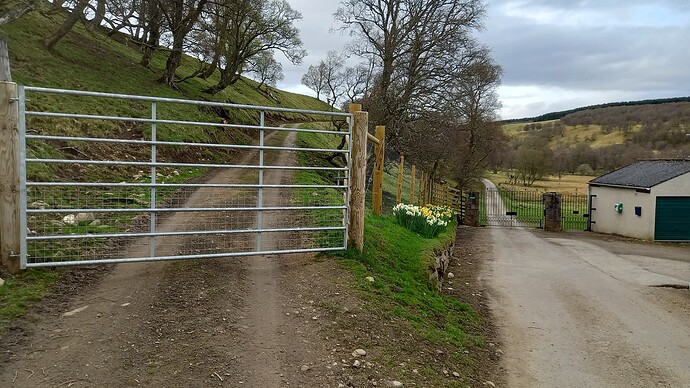 At the first bridge a tarred road joins from the right and it’s easy riding. The second bridge is where the fun starts. 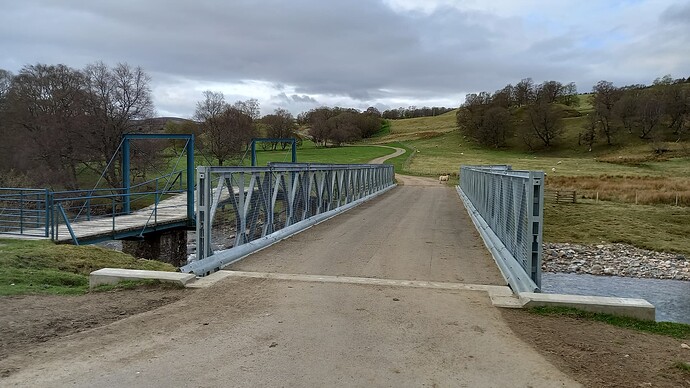 Crossing the bridge, the track ascended quite steeply at first and then levelled off past an estate cottage, crossed an open field and a small wood, before dropping to cross a burn and then ascending on a loose and steep surface towards the open moor. 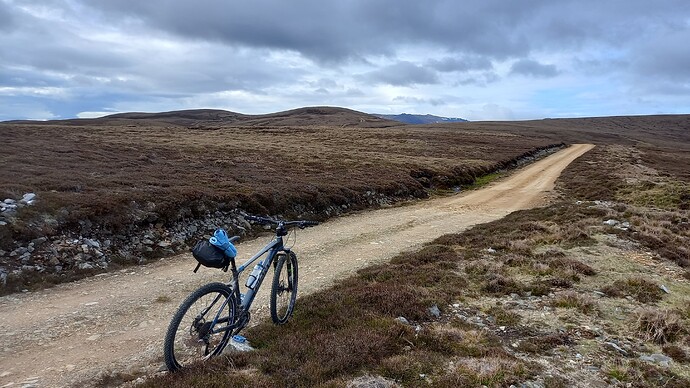 Pleasant riding across the moor, steep zig-zags and then the pnemultimate climb. The Land Rover track skirts the west shoulder of the hill but a steep and loose track ascends from here for the last few hundred metres to the top. JUST about rideable in 1st gear!

It had taken me just an hour, which was an hour less than I’d planned for. A small cairn, a weather station and an incredible vista to the south entirely taken up by Ben A’an GM/ES-006 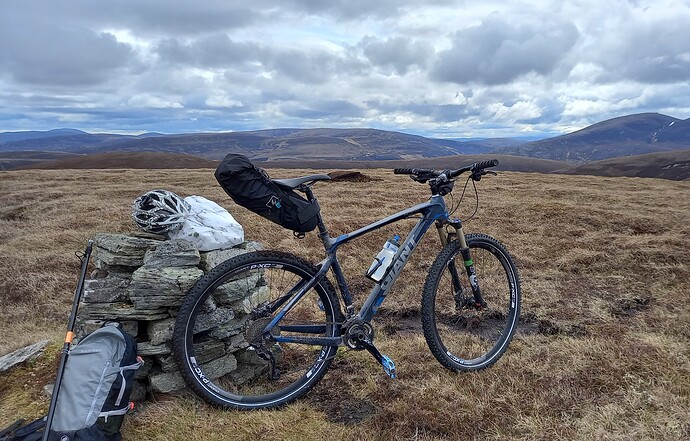 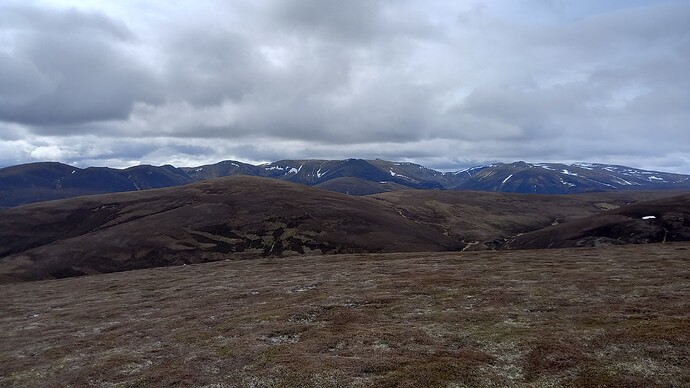 Activation
I settled down on some nice short heather and assembled my 2m beam. I was going to try and contact @GM4JXP Simon, who would be in his garden in Aboyne. An improbable path we both thought, but worth a try.

With the beam connected to my ft-3d handheld, the whole lot hand held by me and a message sent, Simon came booming in 5/9 but couldn’t hear me at all. I just put it down to my 5 W versus his probable 50 W. We agreed to try HF. 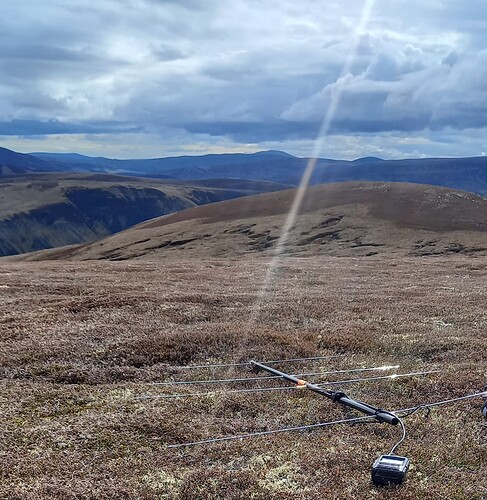 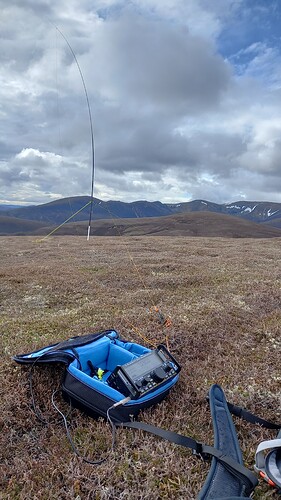 Simon had suggested 20m SSB. Didn’t work but we eventually had a QSO on 40m. Again, the band was very quiet and I was able to use the frequency from the previous time the radio had been turned on.

That challenge surmounted, I put a spot on and had a run of GM and other ‘local’ Chasers. 20m got a few more and a bit more distance. A speculative spot on 17m brought in EA/M0DLL and that was it. Hopefully a new summit for most, as this one had only been activated five times, and not since 2018.

I’d noticed the odd isolated shower moving across the ground to the north of me. As time went on, additional showers appeared and eventually the skies darkened as they combined to form a larger band of rain. That was my cue to go.

I was packed up in minutes and ready to set off when I saw a couple approach the summit. They’d left the car park at the same time as me and had take 2.5 hours to walk up, versus my hour on the bike.

My semi-controlled descent took just over 25 minutes, passing through showers on the way. I didn’t mind. Warm rain for the first time this year! 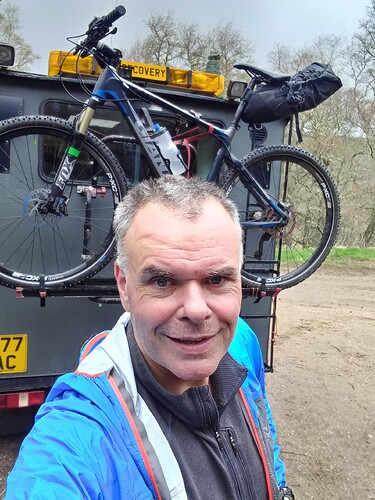 On the way home, I stopped at the top of the Lecht, just past the ski centre. I took out the handheld, selected the memory channel for the distant GB3GN repeater and put out a call. The repeater opened fine, no-one answered but then no-one ever does. Strange, the radio works fine.

Later that day, and after fighting with a prop. shaft universal joint for a couple of hours, I examined the HT in a bit more detail. I’d called Simon on 145.500MHz in VFO mode. Usually I’d use the memory side of the radio. In VFO mode I flicked into the TX power settings, I could see that it was set to Low1. That’s 300 mW. Oops.

Another classic, Fraser. Glad we made it on 40m and I hope your ankle is getting better - we are a couple of crocks right now it seems. 73 Simon

Hi Fraser,
Another good read.
I hope the prop shaft and ankle are much improved.

Well done on bagging another summit despite your “injured” state. I was sat on your 40m frequency listening to everyone working you while I waited for your signal to increase sufficiently to ensure I’d get my report… of course it didn’t. Yet another one where propagation passed me by. I need a remote station set up in your area!

That was a favourite walk from the village - “lump of the juniper stream”, goodness knows why as the river is way below it and I don’t recall seeing juniper that high up.

(believe it or not you pronounce the first word “crap”)

I don’t recall seeing juniper that high up.

There is plenty of juniper about that area Barry. Mo and I had to fight through it on a recent walk near the top of the road that heads over to Bridge of Brown.

That was a favourite walk from the village

I’d forgotren that you’d lived up there. Personally i think that that starting at Tomintoul the best way to approach Ben A’an. Ok, it’s a fairly lengthy cycle or walk up the glen, but the traverse of the Ben A’an plateau to the summit at the far end is like an adventure in a foreign land! One of my favourites.

We have to restrain Barry whenever anyone suggests he cycle somewhere. He’s not a fan of the two wheeled steed

I sympathise with him, having had a couple of near encounters with uncontrolled bikes! Yes, I know most cyclists are careful, but I still get nervous when I see one descending towards me!

He’s not a fan of the two wheeled steed

I know. I was basically Trolling him by cycling to the top of his ex favourite local walk.

it’s a fairly lengthy cycle or walk up the glen

Fairly easy ride, much on tarmac, - but even easier in a normal car when the owner of Inchrory House allows it!
Longest walk I did from the village was to activate Ben Avon then walk out to Cockbridge finishing with a pint (or more) in the Allargue Arms. Had to prime the dog with Scottish Tablet for the final push so she would keep going.

And the saddle will be missing…

Great report and photos @MM0EFI Fraser, was good to work you on 40m! @GM4TOE Barry can’t be any worse than me on a bike…… can he

hope to catch you on the next!

Was working /P from my daughter’s garden near Kinross and heard nothing of you sadly, despite my best efforts. No matter, onward and upward. Go easy on that ankle - if you abuse it you won’t have a leg to stand on with Mo….! (PS in the Western Isles as I write this and it’s hard to see where the sea ends and the sky begins……

Thanks for the writeup, nice photos and a good bicycle ride. Repeaters are the same here, can call and call.

Hi Fraser, at least riding to hell is all down hill

at least riding to hell is all down hill

And the road is all cattle grids!