The Return of the HB1B

Thank goodness that pesky 10m/6m SOTA Challenge has ended. At last I could jettison the FT-817 and the 16Ah LifePO4 battery pack, and return to lightweight CW-only activating using my YouKits HB1B. Except for all my Tuesday night VHF SSB activity, but that doesn’t count anyway because it’s on Tuesday nights and some of the people I work are not “dedicated chasers”.

Anyway, the first time back to more pleasurable activating with a mega-lightweight pack was Saturday 27th February 2016. The Cloud G/SP-015 was the summit, and the QSOs made were:

I couldn’t hang around too long, as I had a gig that night with “The Retrobeats” up in Hyde. 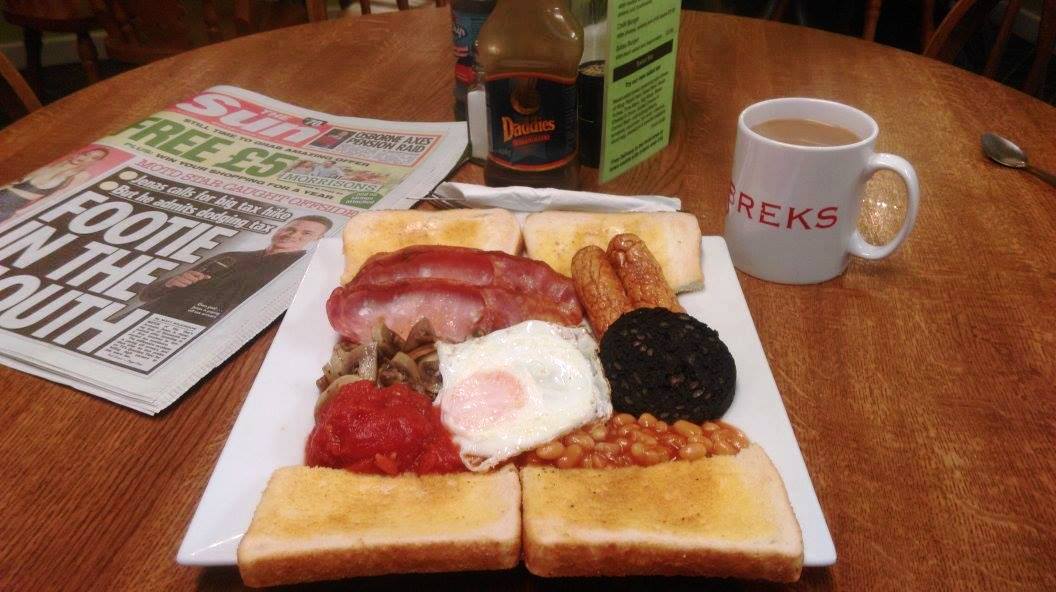 To Saturday 5th March, and I was up quite early, probably due to the previous day’s Friday football being cancelled. After a hearty breakfast at “Nosh & Breks” on Hurdsfield Road, I drove up the Buxton Road for a look at Shining Tor G/SP-004. The usual parking spot was under deep snow and I didn’t dare risk it. Instead, I drove further up the road and parked opposite the (still closed) Cat & Fiddle pub. 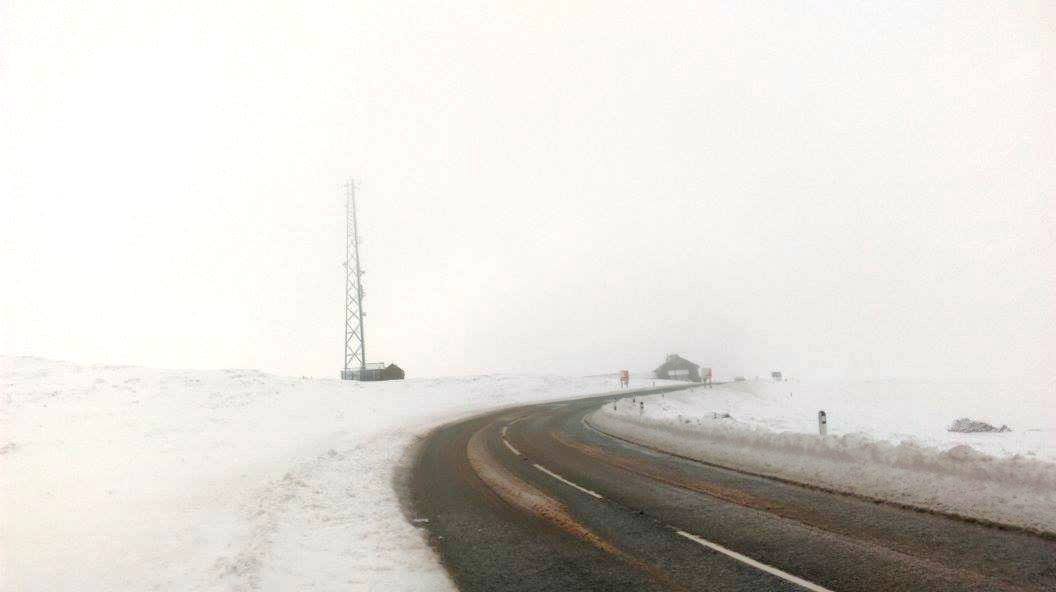 Even walking the short section back down the road to the normal track to start the walk, was hard work with deep snow right up to the roadside. Once on the track, I was plodding through 12 inch deep snow already. It had either snowed again overnight, or it had drifted and smoothed over. 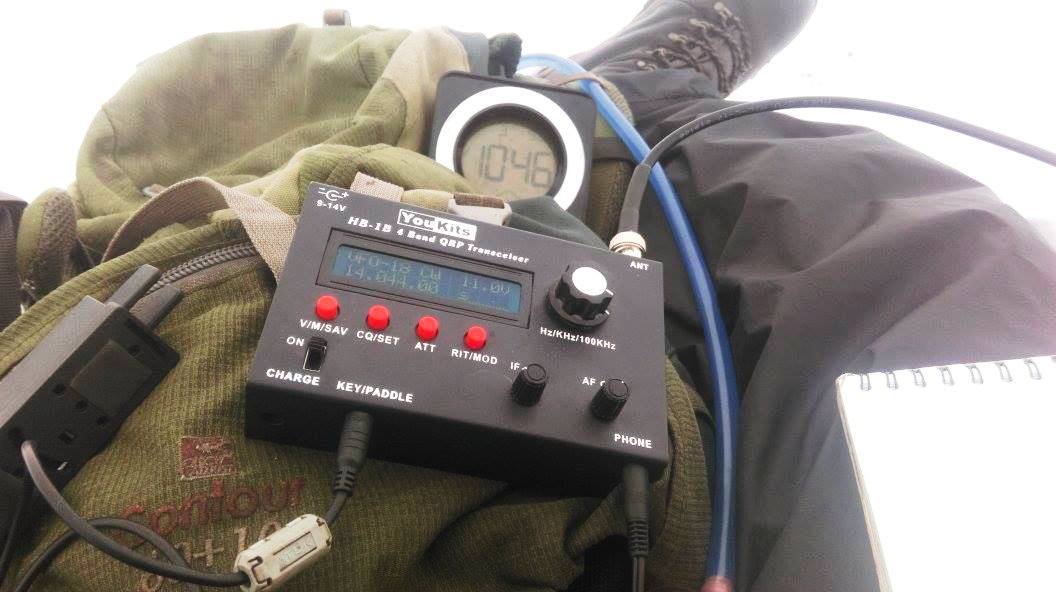 Once I turned the corner above the Peak View Tearooms, the going got really tough, and I was either bulldozing my way through waist-high drifts, or clambering onto the heathery banks beside the path to try and make the going marginally easier. Either way, it was slow and tiring progress and I considered abandoning on several occasions. 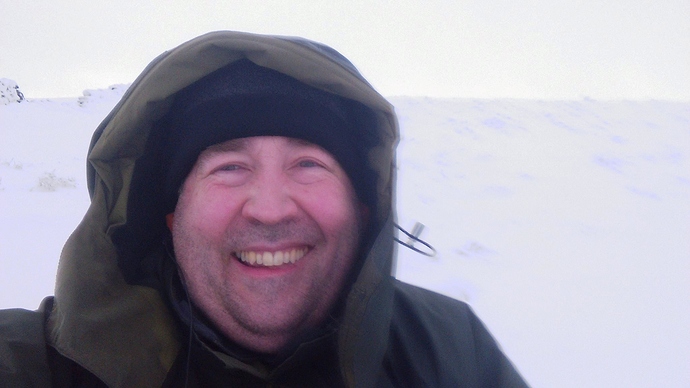 This continued until the final approach for the summit, with the lying snow getting deeper and deeper. Still, it seemed I was the first on these routes in the day, so although the going was tough, it was amazingly beautiful. Well, I was the first human anyway. There was periodic evidence of grouse footprints, but that was all. 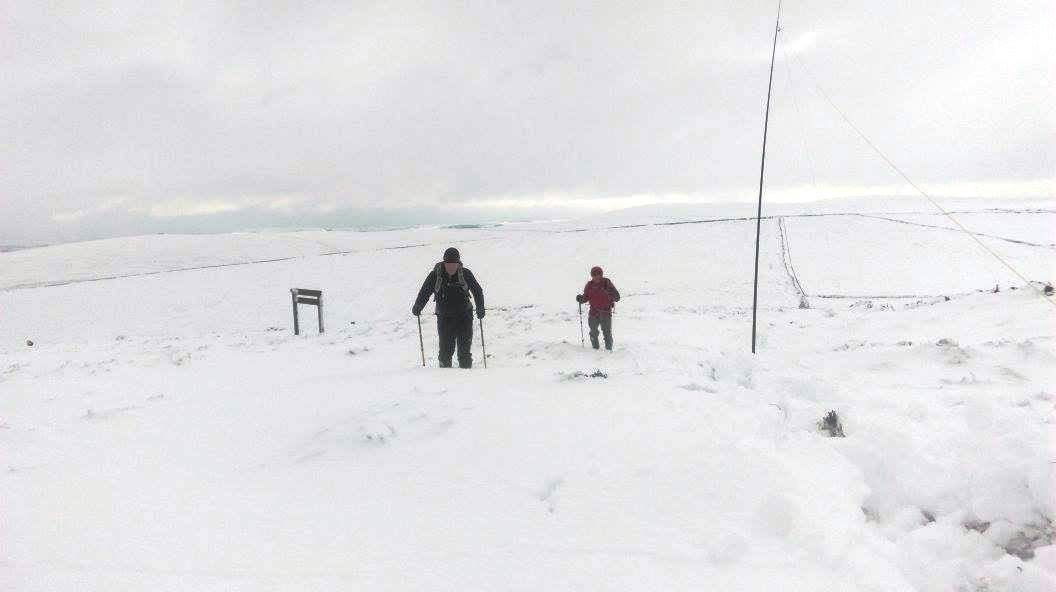 I decided to set up on the final ascent towards the summit, about 10-15m vertically below. This afforded me complete shelter, and a cracking view over the Goyt Valley, Cat & Fiddle and Axe Edge. I set up the end-fed & Micro Z tuner, feeding the HB1B. Last week I couldn’t get a single contact on 20m with this set-up, but this time it was totally different, and it was 40m that was hard to get going. 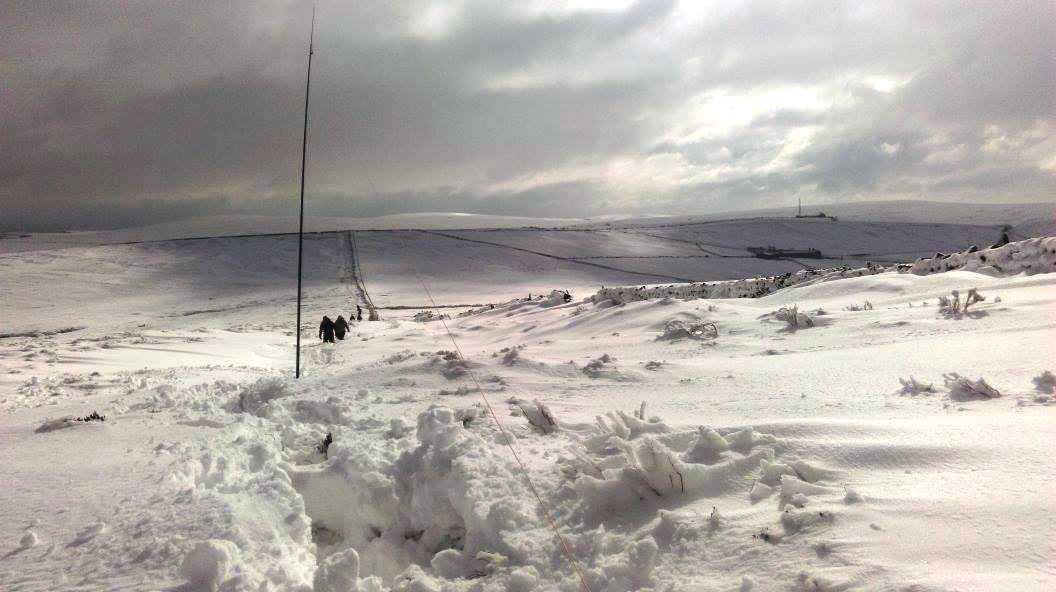 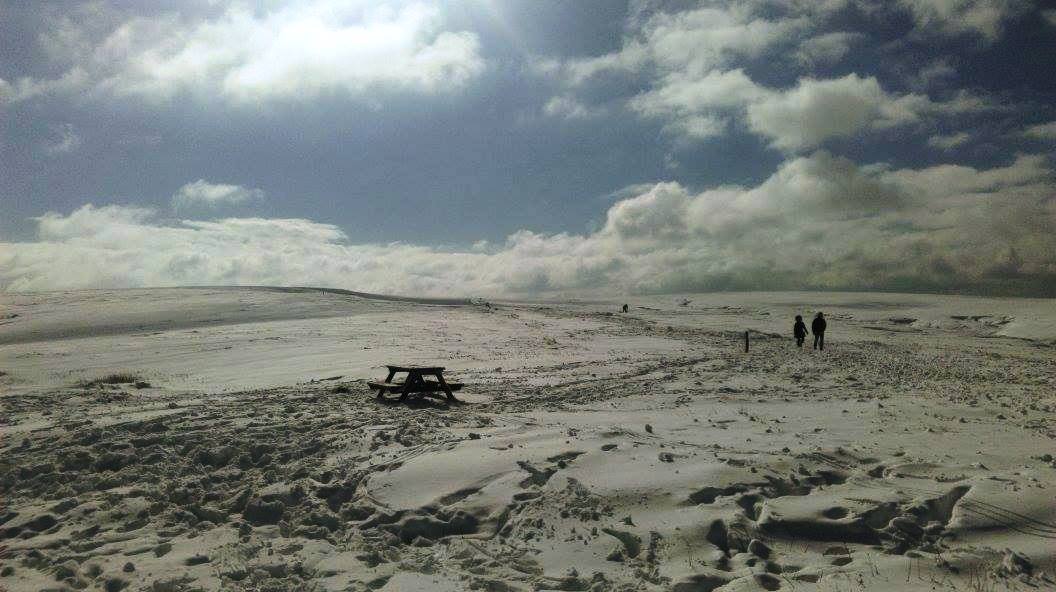 I was quite satisfied with 39 QSOs, and as ever, really enjoyed using the HB1B, which is a lovely rig to use. Plenty of people walked up and past me during my activation, most taking an interest in what I was doing. I was pleased because their footsteps would make my descent much much easier! Indeed the return walk to the Cat was probably about a third of the outward walk, in terms of time taken and energy expended. 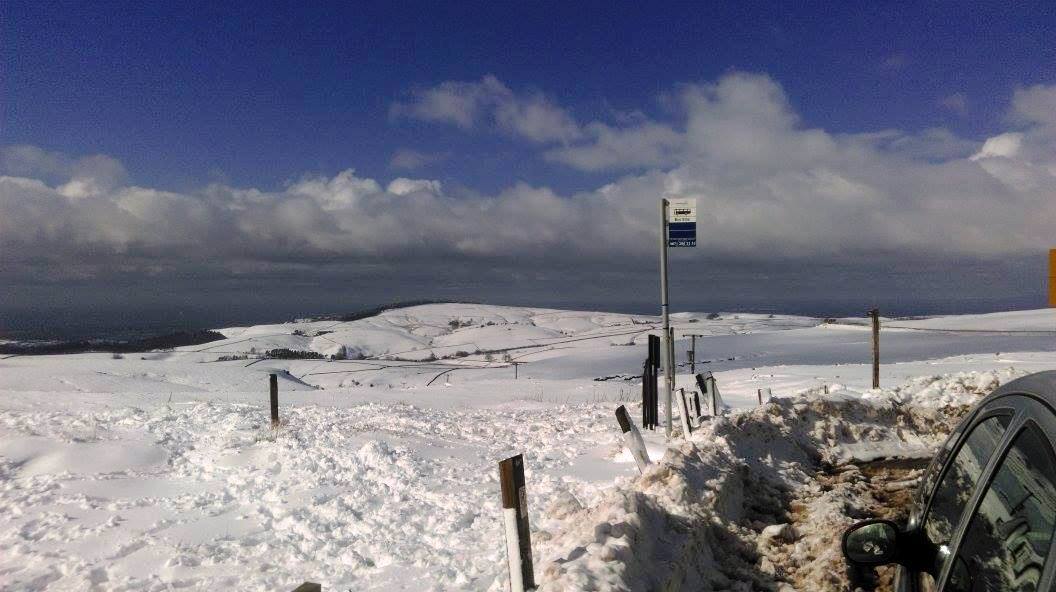 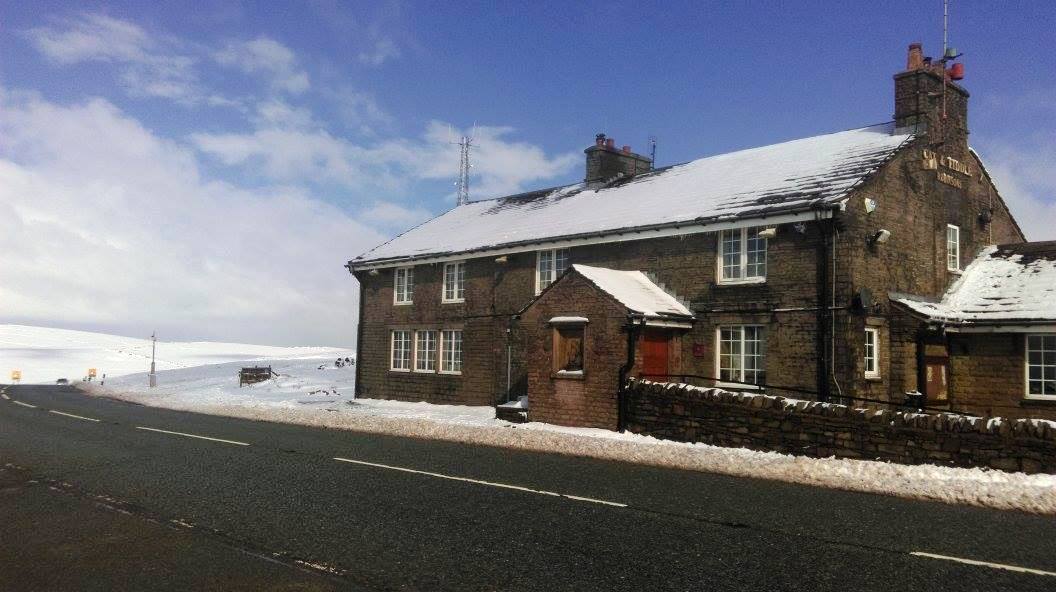 Mni tnx fer qso this morning at 10:40 Comparing the wx: here 22 C and sun while ur circumstances were a little different hi.
73 de geert ea8/pa7zee

When I was in EA8 (Tenerife) last year, I activated at 0 deg C with some snow on the ground - above 3700m ASL, while my wife relaxed by the hotel pool a few miles away at 26 deg C!

Good to work you this morning. Not too strong and very noisy at this end. Looks like a lot of fun

Another outing with the HB1B and associated very lightweight pack. With no external battery required, the very lightweight end-fed antenna and just a minipole, it feels like my pack contains virtually nothing! Which is really rather nice!

This morning - Saturday 12th March 2016 - I went down to the garage to have a knocking sound from under my car checked out. It occurs whenever driving over a grid or a sleeping policeman. They tightened up the fixings around the relatively new exhaust and sent me on my way. I then experienced all the same knocking and rattling as I drove to The Cloud G/SP-015 - so I guess I’ll pop it back in the garage for another look sometime!

Because I was approaching from a different part of Macclesfield than usual, I found myself driving through Bosley village. Large sections of the road through the village were flanked by high solid metal fences, behind which the Bosley Wood Treatment mills once stood. One presumes that investigation and clearing-up work following last year’s tragic explosion will continue for some time to come.

The summit was relatively quiet for a Saturday morning, and only two or three other sets of people were seen. I enjoyed using the Youkits HB1B as I always do, but used the Yaesu VX7R to grab a couple of S2S when I noticed them on the SOTAwatch Spots.

Back out with the HB1B and end-fed on the morning of Saturday 14th May 2016. The pack is unnervingly light! The Cloud G/SP-015 was unnervingly quiet, although not entirely deserted - it needs to be horrible weather on a subzero winter’s night for a chance of that.

In fact two of the passers by were keen to tell me about their licensed relatives and friends. One was even texting her brother to try and fix up a sked there and then! Results on the air were 8 QSOs on 40m CW, including S2S with DL/HB9BIN/P on DM/BW-848, 6 QSOs on 30m CW, none on 20m despite plenty of CQ calls, and finally 5 on 2m FM with the handie.

A pleasant sunny morning, if a little chilly. Thanks to all who called.

…But no update on the exhaust noises, Tom. Or perhaps it was sleeping policemen all the time?

Your readers are waiting for the rest of the news!

Couldn’t get to the bottom of it for ages, but it got worse this last week and something seemed to be catching and pinging especially when turning a sharp corner. My trip to G/SP-015 yesterday was in between two trips to the garage - the first for the diagnosis and the second for the repair. Thankfully the “damage” was only £44.

There’s more things my readers are waiting for - like my website http://tomread.co.uk to be updated with activations and photos going back many months. Plus two from over a year ago that were deliberately omitted as the article was published in PW (Tenerife EA8). Anyway, I now have permission from the editor to post a PDF copy of that article on my website, so will do shortly.

At that price I guess it wasn’t a CV joint. The joints on my Renault R16TS progressively self-destroyed in about 1975 and they made similar noises when cornering as each part of the joint was stressed by operating at an angle. I have been alert to such noises ever since.

Good to know the mystery has been solved. Your readers will all be relieved.

At that price I guess it wasn’t a CV joint.

Dunno. Something like that. Just pleased I made sure I got it sorted relatively promptly as cheap garage jobs can suddenly turn into expensive garage jobs if you keep putting it off and it causes something more serious - been bitten like that too many times before!

Loads of catching up to do. Today I uploaded 20 activations containing 740 activator QSOs (earning me a total of 2 (TWO) activator points). Tomorrow I will press on with my chaser, S2S and SWL logs dating back to October 2015. At some point I will do those webpages too.

Constant Velocity Joints on front wheel drives can make funny noises too. My Subaru had a boot perish near the exhaust out let on the right hand side and let the grease out. I could smell it burning after a hard fang home late one night after a big day of hill walking for SOTA . Cost a mint to fix.
Good to see you are back on the HB-1B, Mine has been in its box too long as well and is close to another run for a cw only SOTA .
Regards
Ian vk5cz …

It was a metal rod with a circle on the end hanging down (instead of being connected). It was getting caught on the steering mechanism when I went to full lock. As this topic seems to be more interesting to some than amateur radio or hillwalking, I will have a look on the garage receipt later so I can report back on exactly what the part was that was replaced!

It was a metal rod with a circle on the end hanging down (instead of being connected). It was getting caught on the steering mechanism when I went to full lock.

Drop links FS. I don’t often hear of CV joints wearing out nowadays.
Mine is poorly currently. Injector seals have gone on the diesel, won’t rev up past 1100. Joys of motoring. I had to get it home from Manchester to North Wales running at 35 mph in limp mode. Thankfully Knutsford has plenty of 30mph limits.

There was a time when you seemed to talk about nothing but soup so your expanding repertoire is probably a great relief to many.

1). It is others getting into the vehicle mechanics not me.

2). Off on a week’s SOTAing in GI shortly. The soup chronicles will be back before you know it.

I was thinking that the soup chronicles should feature local recipes when you are on tour. So if you were up in Scotland you could have Cock-a-Leekie or Cullen Skink. Then I realised I have no idea what a typical Irish soup would be. Your mission Tom, is to report back on a classic Irish soup.

That’ll be the broth that my father in law will have on the stove when we arrive in Larne on the Sunday evening then. It is delicious, but you’re never quite sure how long it has been there.

Various variations, but typically with lamb or ham off the bone, potatoes, carrots, turnips and barley.