The Old Man of Hoy

On Saturday 8th August 2015, MM0YCJ and MM0DHY successfully activated the 137metre sea stack, the Old Man of Hoy (Three Old Men of Hoy!) Arriving on Hoy the evening of Friday 7th, they stayed in Burnmouth Cottage, an open bothy maintained by the Hoy Trust at Rackwick Bay, well worth a visit. Sleep was disturbed by another occupant apparently chasing a marauding rat around the bothy in the middle of the night!

Next day they arose at 05:00 hours British Summer Time and left the bothy at 05:40 hours. They had a pleasant walk over the headland to the Old Man but the descent path to the base of the stack was treacherous owing to recent wet weather, MM0DHY remarked that this was the most dangerous activity of the day! They started rock climbing the ‘Original Route’ at about 07:30 hours and despite a short very light shower continued up the extremely severe graded climb achieving the summit at 11:00 hours. 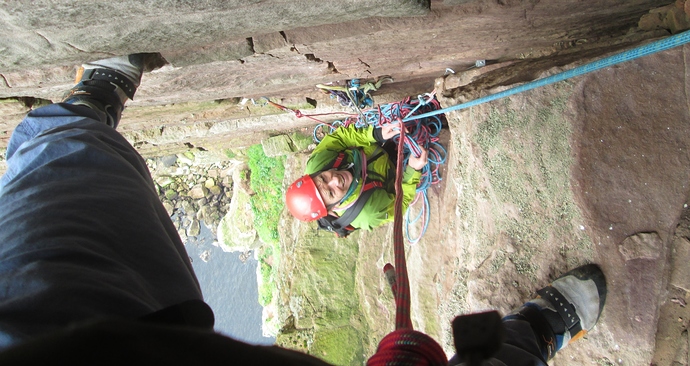 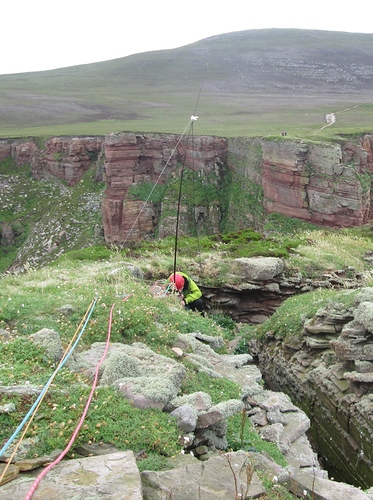 OMoH radio summita.jpg2520×3373 2.39 MB
Despite having carried a 40metre IV dipole all the way to the summit, neither were willing to deploy it because they would have had to go ‘too close to the edge.’ Combined with some anxiety about the weather and borderline phobia about abseiling back down the stack (and problems radioing with a dry mouth), they dismantled the station at 11:40 (perhaps the shortest transmission time for a special event station in history) and started the tricky descent. This involved three very long abseils, the final one being free (no rock to put your feet against). This was achieved (obviously) but not without incident. MM0YCJ managed to get MM0DHY to abseil first, but somehow still got covered in vomit from a disturbed Fulmar chick on a ledge as he descended. In theory the chick should have been empty after the first person abseiled.

On reaching the third abseil point, they suffered a catastrophic gear failure when an HMS karabiner jammed shut. Unable to free the abseil device (a sticht plate) MM0DHY was able to abseil down to the rocky beach and attach his sticht plate to the end of the rope for MM0YCJ to haul back up and finally use to make a safe descent. Needless to say the jammed karabiner was later destroyed.

An ascent of The Old Man of Hoy is a coveted route for most rock climbers, indeed this was the 4th time MM0YCJ had visited the summit, he just can’t keep away! Being first to radio from a new summit is also a coveted event and by combining the ascent with a radio activation allowed Adrian and Colwyn to achieve two fantastic goals during one trip. 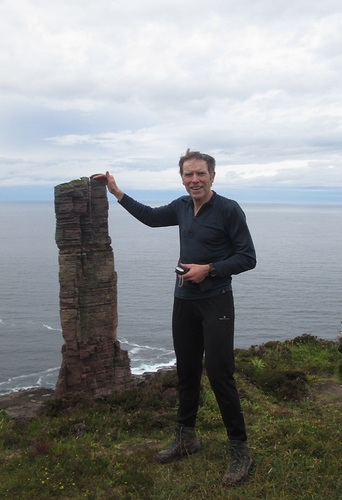 Had we only known we would certainly been looking out for the both of you especially after I had summitted on the treacherous ‘Mount’ Tinto (GM/SS-064) for a S2S!

Impressive and of course well done the both of you!!!

Proper “Adventure Radio” that! Thanks for sharing

Well done on an excellent achievement. I am certain Mike G4BLH would like to record the event on the Summitsbase database as it is a HuMP, reference GM/HSI-127. Who says HuMPs are boring?

Well Done!
I remember as a child when the BBC covered the climbing of the Old man of Hoy. It was televised live for the whole of a saturday afternoon if I remember correctly and was seen as a major achievement - both the climb and the live television (in those days cameras were LARGE and HEAVY)!

Question to MT : For special actions like this - could special temporary SOTA summit code allocations be made? The Summit code would be active only for the day of the action and of course only chasable on that day?

OK, accepted, it was just a thought - thinking more about it, the management could be a nightmare. I remove the suggestion - not a practical idea.

Very impressive. Thanks for the story and pictures.

Well done to the pair of you. I have seen this stack from the safe side and it looks wonderful.

Nowadays I have jumpy night sleeps when I think of exposures. Need to get out more but I think my days of hard climbs are over due to this damn back of mine - but I live in hope.

Great escapade!
Are there any easier routes up, around severe?
A great shame not to have worked you. I was 3kz down from you operating in wales at the exact same time!

Are there any easier routes up, around severe?

Easiest route is E1 5b. Although not technically hard and pretty safe with lots of big gear in cracks, its a fairly serious undertaking. The best route is an E5 6b but not sure I would want ot take radio gear with me on that one

The descent is probably the tricky part with being a multi-pitch abseil.

Good effort from the team hopefully we will get a few more of these style of ascents.

I won’t be going up it then. I could probably drag myself up a VS as a second if short these days.
Step dad did it back in the 70s 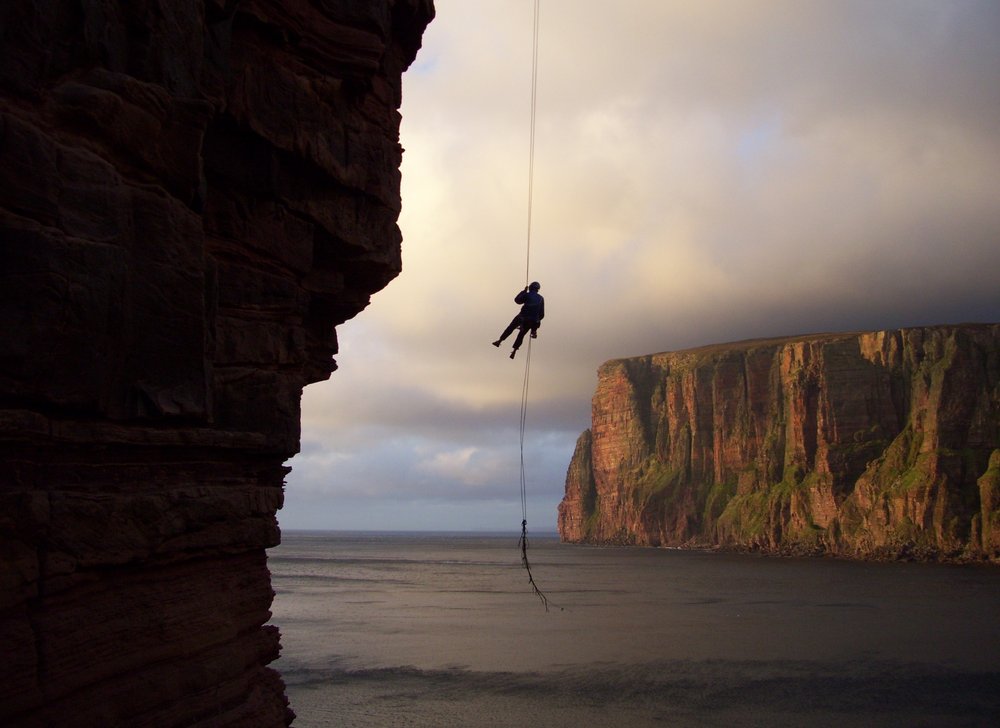 The cliffs at Hoy sport some amazing 'Scottish VS' climbs, and the famous 'Old Man of Hoy' (E1) and 'A Few Dollars More' (E4). The famous East Face Route was immortalised by the BBC, featuring Joe...