The date has been moved due to the change of rules in the RSGB Christmas Cumulatives, which is “one day - one band” now and 144 MHz will be on 28th. The event has always aimed at -besides having s2s fun- working stations across The Channel, so from the continental view the traditional date would be no good any more.

“Raus auf UKW!” (Out on VHF!) was first held on 29th December 2016 when there was good tropo condx from the continent to the UK coinciding with the RSGB CC contest. From then on, the event took place on the same date every year. Being an DL-focusing event for some years, the 2019 edition was widely noticed by the SOTA public due to -again- fb tropo condx. Lots of s2s contacts were made.

I alerted for 1300 utc, so there’s gonna be one hour for s2s QSOs before the band getting crowded with the start of the CC.

It seems that the unstable wx forecast (at least for DM) and a rather low predicted Hepburn index don’t attract that much activators. WX is looking not that bad for North DM, so I will be out anyway. With a rather small number of s2s QSOs expected, I will postpone the activation to 1330 z.

Is it mostly FM or is SSB/CW used?

The weather forecast is not good for here in SW UK but it might improve.

SSB, John. Activity will probably quite good in the UK, so a nice opportunity anyway to find out what 10 W can do and in which direction the summit has its best take-off.

If it is going to be dry I can try from a local hill. My radio isn’t very waterproof!

I’ll try and join in but will depend on the weather.

I worked an OS and PA station today from GW, but it needed 75w into a beam on FT8 so the conditions aren’t as good at the moment as they weŕe last week.

The forecast for Devon has got worse. Gales now.

But the forecast might change. I will sacrifice a few sausage rolls and pull a cracker this evening to appease the Yuletide Gods.

I tried this afternoon but couldn’t hear anything. I got a few replies from local operators but no DX. The forecast suggested a chance of Sporadic E but there was too much rain between us I think. G/DC-003 isn’t the best summit for VHF to the east but given the weather I wanted somewhere with a short walk back to the car!

This is the view looking east as I came down. It was beginning to brighten up but you can still see the showers! 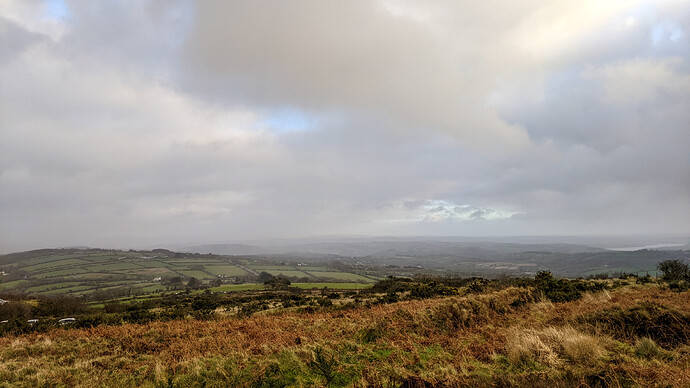