I was out gigging last night with Liam, so it was a fairly late night, delayed a little more by being pulled over for my umpteenth breathalyser on the way home. Passed with flying colours as usual of course. By now I’d got a sniff of an activation opportunity for Sunday, knowing that Marianne and the boys would all be having a late lie-in, then catching up on TV recordings from the Saturday night! I fancied the walk up from Rushup Edge to Kinder Low (for Kinder Scout G/SP-001), much of it along a relatively newly laid flagged path over a previously very boggy, remote and inhospitable moor!

So I really should have gone to bed as soon as possible - but I found myself writing bass parts for a client in Switzerland and eventually hit the sack at 0230z - not good activation prep.

I decided that the best time to set my alarm for was no time at all, and just wake up naturally. This I did at 0930z, and went down to put the soup on for the flask - Heinz Chicken Noodle soup on this occasion. While doing this I messaged Richard G3CWI on the off-chance he might wish to join me - and to my surprise, he did.

After picking Richard up, we drove across town and I found myself driving up Buxton Road as though I was heading for Shining Tor G/SP-004. Of course, for Kinder Scout G/SP-001, I needed to have taken the Whaley Bridge road up through Hurdsfield, Rainow and Kettleshulme. “Thank goodness for Fence Avenue” I said to Richard, before turning left into the aforementioned crescent that linked to the road I should have been on!

The lay-by on Rushup Edge was pretty full, but there were a couple of spaces free at the back. We headed up the bridleway onto the moor, and then out onto the flagstone path, which is quite an impressive accomplishment to have created. It is very nicely laid, makes this section an easy stroll compared to the utter purgatory it used to be, plus it allows the moorland to recover. I was really impressed today with the speed at which much of the natural vegetation has returned in the space of just two short years since the project to lay this path and reseed the moorland.

Shortly after the trig point at Brown Knoll, there is a right turn down an existing flagged path, which joins the Pennine Way as it begins to climb up to Edale Rocks, and then onto Kinder Low. So this bit was now familiar to Richard, who had never been this route onto G/SP-001 before. 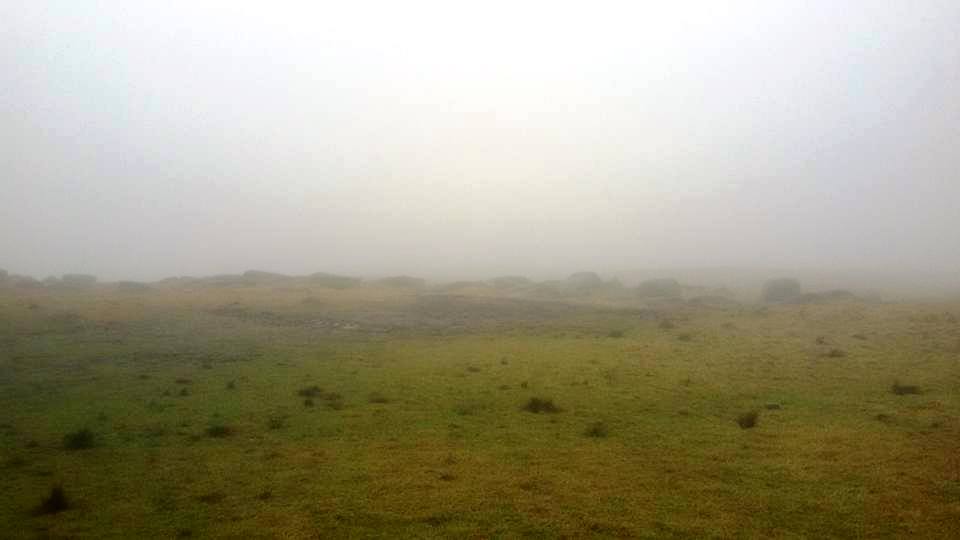 We found a couple of spots under rocks to shelter from the strong wind. Richard used one of his new portable chairs which afforded him a relatively luxurious level of comfort as he spent time on the summit not even attempting to activate! I enjoyed my soup lunch, followed by a surprise bonus of a delicious piece of homemade fruit cake from Richard’s wife Wee Wah. 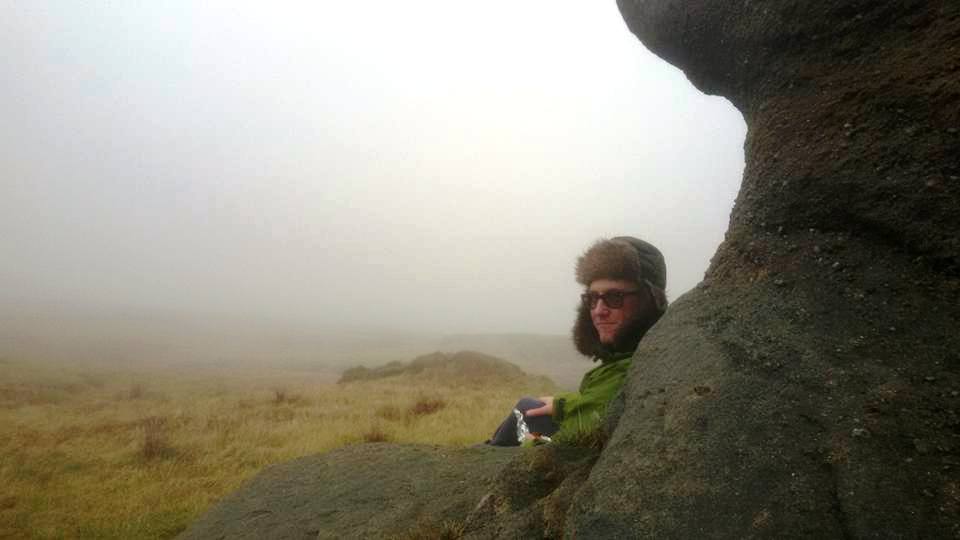 I’d intended - and indeed alerted - for 40m. When I got to the parking spot, the 40m dipole wasn’t in the car, so I took the 15m groundplane instead. At the summit, I felt it was too windy to be messing about with such an arrangement. I could only envisage radials ripped away from their connections and a SOTA Pole broken in several places if I tried - so I didn’t. 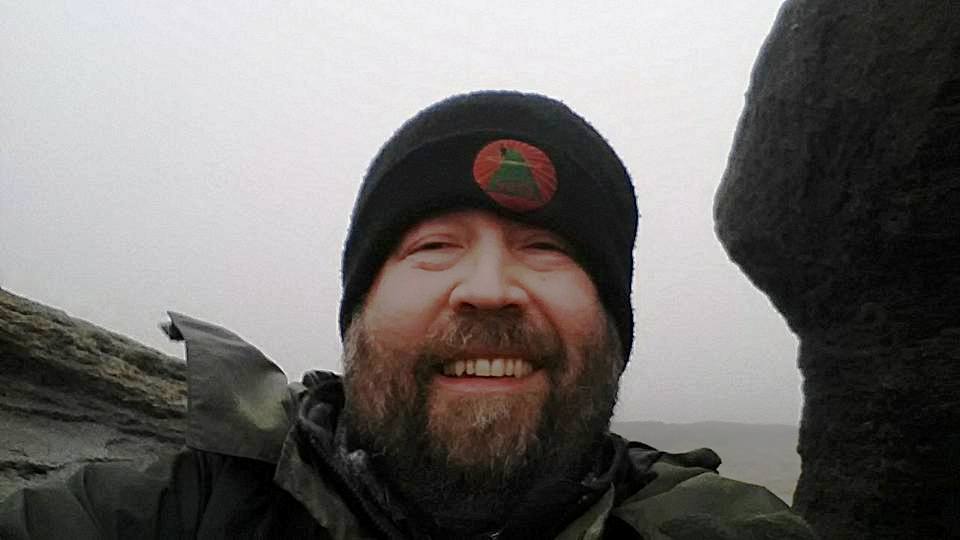 So yet again for 2018, 2m FM handie activating it was. No problem though, with nine QSOs coming in. Just as we were about to leave, Simon G4TJC/P joined us. He had also been activating Kinder Scout, but from a different and distant part of the plateau - it is a very large AZ on this one. 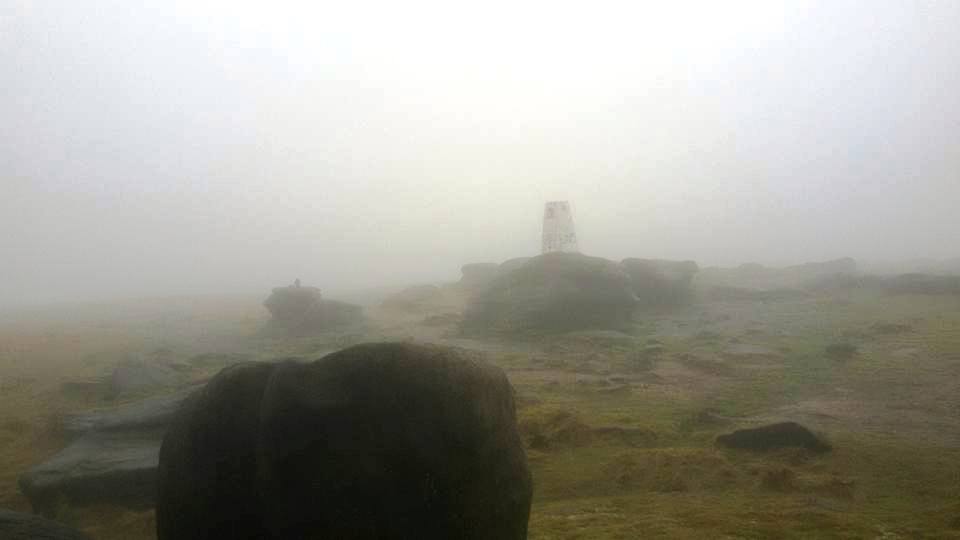 We monitored Simon’s 70cm activating as we descended, and we both called in to work him once we were below Edale Rocks and safely out of the AZ. The rest of the walk was simply a reversal of the earlier outward route, and we were back at the car just before 4pm.

We had seen many fellow walkers out on all sections of the path, all day, and a particularly large number of people in the Kinder Low area. Perhaps surprising for a January day with less-than-perfect weather (strong winds, thick fog and intermittent drizzle) - or maybe just an indication of the growing popularity of walking?

Pub stops on the way home were the Hanging Gate at Chapel-en-le-Frith for a pint of Old Golden Hen, and the Robin Hood Inn at Rainow for a pint of Proper Job. A most enjoyable outing - thanks to Richard for his company.

Yeah I know that. The whole band are acutely aware of it whenever we do tour dates up there with Joe Longthorne - Glasgow Pavilion, FTC Theatre Falkirk, Bruce East Kilbride etc.

It was great to run into you and Richard on Kinder today. Thanks for the chases. 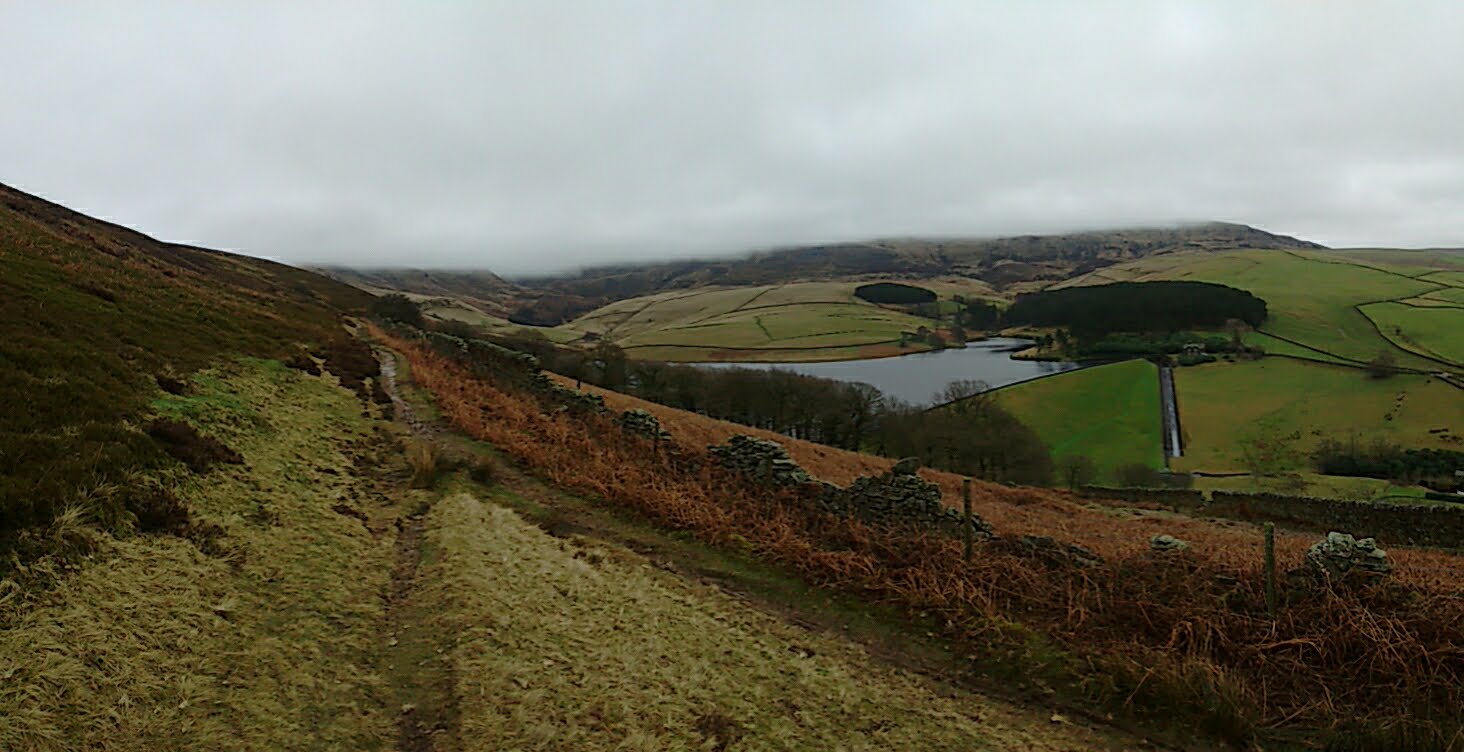 My route was up from Bowden Bridge near Hayfield, taking the north side of Kinder Reservoir to the path straight up for The Edge trig point. There it was nice and quiet - not a soul. Busy of course along the Pennine Way next, to reach Kinder Low trig point. 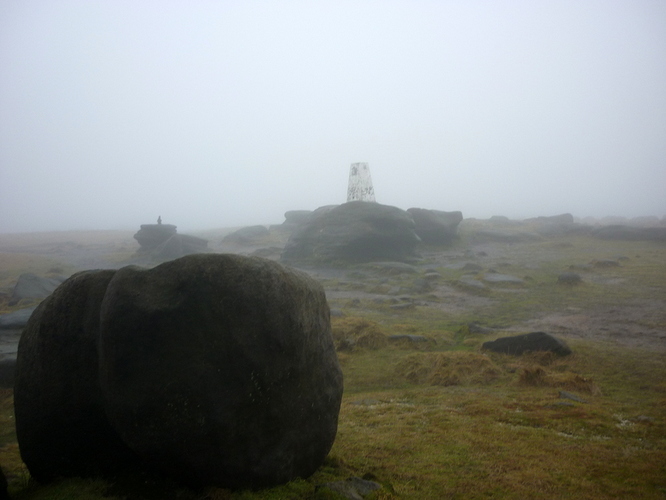 Rather than taking the footpaths across the fields back to Hayfield I decided to keep to the lanes, rather than splodge through the mud. I hadn’t been this way before and found it slow going, comparable to a boulder field! Anyone brave enough to cycle these would be well-advised to ensure they have especially good suspension. 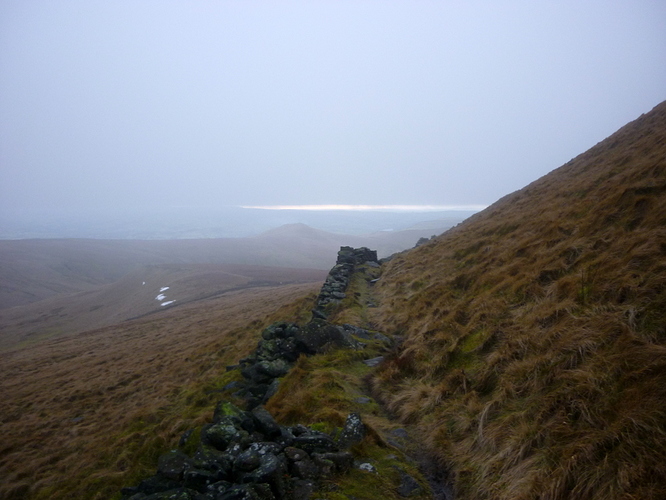 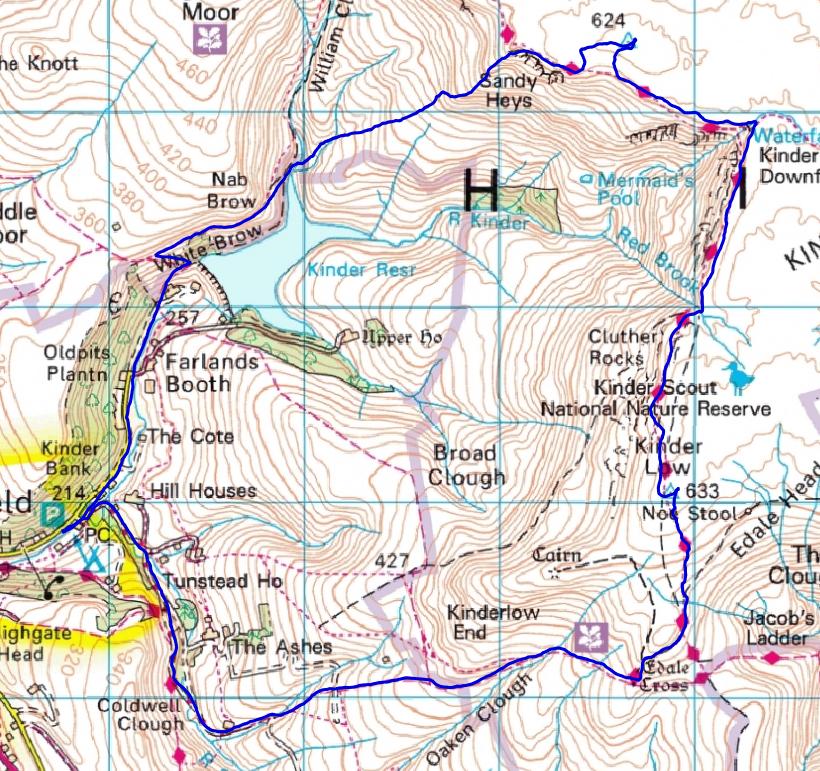 Thanks to all the chasers and S2S activators.

Great stuff Simon. Your walk was slightly longer than ours, which was 12km, but all very easy on proper paths and good surfaces. Good to hear you racking up plenty of 70cm contacts - how many did you get in the end?

A splendid outing! I was pleased to be able to test my new walking wellies, a sort of hybrid between traditional wellies and walking boots. They performed well and would be great on many of the more muddy ascents that we have here in the UK. Their softer soles would not be suitable on rocky ascents though. I was also able to further test my new backpacking seat “the SOTA Sofa”. It was really comfortable and indeed I was nearly falling asleep as Tom waffled on 2m FM… The other test of the day was Tom’s new favourite route up Kinder. It’s the perfect route for anyone who enjoys a long flagged path across a featureless moor.

Only two backhanded compliments Richard? Not like you; still a bit tired?

Apart from a gentleman in wellies sitting on a sofa, apparently…

70cm contacts - how many did you get in the end?

Two pints can put you over the limit on this side of the border too.

Absolutely Anthony. The important thing is the limit is different up here. Probably the limit should be lowered in G & GW. The effect the lowering of the limit up here on me was I was confused as to where 1/2pint ot 1pint would put me with a 50mg / 100ml limit. I’d already come to the conclusion that 2pints even in my generous frame was putting me uncomfortably close to an 80mg / 100ml limit. As I wasn’t sure what I could drink and drive yet be legal, I made the very simple decision, if I’m driving then I’m not drinking alcohol. I make no moral judgement on those who drink a little and drive, but the change here made me make what I think is best decision regarding how much I can drink and still drive.

Two pints can put you over the limit on this side of the border too.

Tom generates a significantly higher-than-average gravitational field which works in his favour in such matters.

It’s the Original Gravity you have to watch

So it’s his fault the earth’s magnetic fields poles is due to swap?

earth’s magnetic fields poles is due to swap

I don’t care… I have updated my compass to have a blob of red paint on either end of the pointer. It always points North now!

earth’s magnetic fields poles is due to swap?

Long over due. Been longest spell in last 3my.