If you are on the detail page of the summit, do a right klick with your mouse on the small map. For me the GPS data appears if i do that, and the option to open these coordinates in a different map.

I hope this helps.
73 Sabrina HB3XTZ

Thanks for the hint. I have not noticed that so far.
It’s helping to speed things up for the moment.

Maybe Manuel got inspired for the next version to implement a map-picker at the individual picture window.

Maybe Manuel got inspired for the next version to implement a map-picker at the individual picture window.

To expand on what Sabrina said: When you right click the map, there is a button to copy the coordinates to the clipboard. You can then paste that into the latitude field when editing a photo, and it will automatically split at the comma and fill in the longitude field as well. Hopefully that will make it a bit easier while a feature to directly choose the coordinates on the map is still missing

Not yet, but I have it on my to do list to make SOTLAS a bit more “social”

split at the comma

I have noticed that already. Very nice.

activator are shown with an icon, and on the regional summit lists, summits with photos are highlighted as well.

Where is the donation button?
Just the energy costs of running 8cores for 2 month should be compensated. The new map tiles are great

Not to talk about your time invested

Hello Manuel,
sotlas is a great thing. Thank you very much and hope to meet you again soon.
Paul DL6FBK

Does the photo function support 360 degree photos (says the man with a new Insta 360)?

Not at this time… I don’t know much about them, but from what I could gather on the web, if the output files use standard “equirectangular projection”, then a viewer component could be added to SOTLAS that lets the viewer look around.

I have done a bit of experimenting.

Here are two pictures on Bogrie Hill GM/SS-205 from the camera Olympus TG-830. 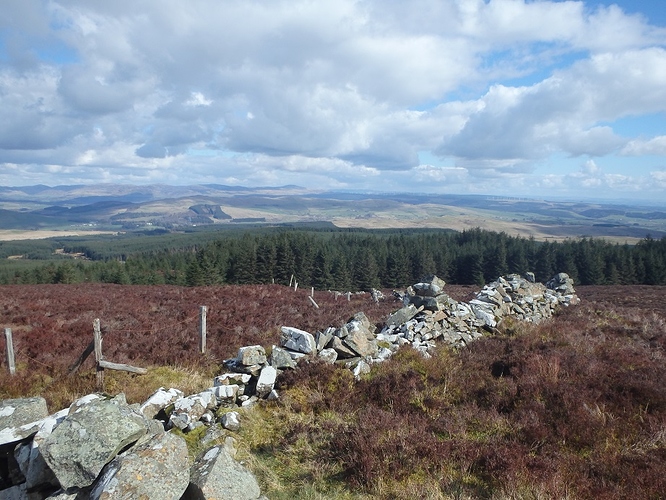 If you look at the file details one has the GPS (Lat, Long) and it is missing on the other. This is my fault, when I switch the camera on, it takes a few moments to acquire the GPS. If you take a picture before the GPS is acquired then it does not attach the long and lat to the photo, once the GPS has been acquired then the long and lat are added to the file details.

(The photos attached in the reflector have been reduced in size)

When they are added to the SOTLAS Photos they don’t appear, however they do appear on the map as the camera icon. One on Bogrie Hill and the other in the sea at Long,Lat 0,0 because there was no GPS included in the file details.

Here is a screen shot of the summit page, showing no photos in the Photos section and the two camera icons on the map. 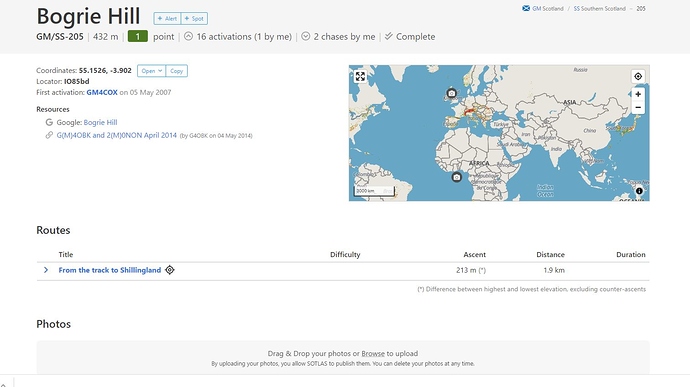 Bogrie Hill upload issue1512×849 96.2 KB
Neither of these photos can be deleted or the location edited because they are not listed in the SOTLAS Photos section.

However from the same trip the photos on Fell Hill GM/SS-217 work fine. 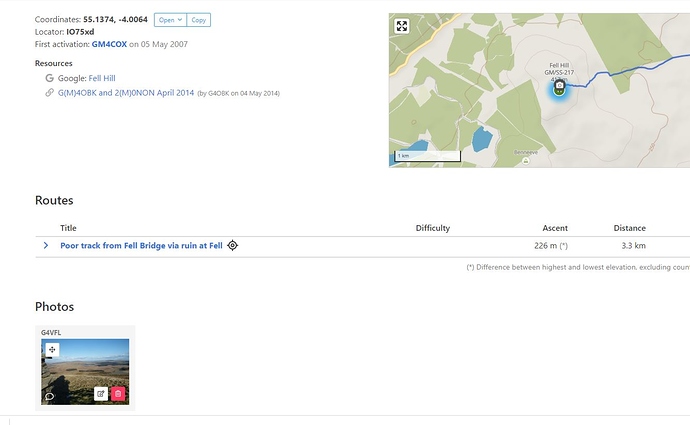 Thanks for the report! I’ve had a look, and it seems that this camera sets the coordinates to an invalid value, instead of omitting the coordinates tag from the Exif header like other cameras do when they have no GPS fix at the time the photo is taken. These invalid numbers caused problems in the web interface. I have fixed this now (for both past and future uploads) so that SOTLAS ignores such invalid coordinates. If you refresh the page, you should now see all photos

Many thanks, it’s working fine.

Thanks for all your work on SOTLAS, it is really handy for planning where to go when the lockdown finishes.

This thread was the first I’ve heard of SOTLAS, it’s such a fantastic resource for SOTA, and has become my tool of choice for planning activations for when we’re allowed out doors again.

I added a few photos to G/LD-037 but the picture icon on the map only appears at the trig point, and doesn’t seem to show the other pictures taken on the trail on the map. Have I done something wrong when I’ve uploaded them?

If you zoom out far enough they appear !

The Long / Lat is not on Little Mell Fell, I guess you may have done the same as me, not allowed the camera GPS to locate you before taking the photo.

Thanks for the nice words!

You haven’t done anything wrong, but your camera/smartphone apparently has

As Andrew mentioned, if you zoom out, you will find more photo icons, which are probably in the wrong place, but that’s what the coordinates in your uploaded files said. Your smartphone likely didn’t have an accurate GPS fix at the time the photos were taken. Unfortunately it seems that only iPhones reliably include GPS accuracy information in the photos – if this is available, then SOTLAS omits photos with a horizontal positioning error of more than 100m from the map. If this information is not available, as with your photos, then SOTLAS has to take the coordinates at “face value”.

You can manually remove or correct the coordinates for each photo by clicking on the corresponding edit button.

Thanks both, you know I zoomed out originally and assumed that they where photos from other summits, that will teach me to double check!

I’ve manually corrected those ones, and I just need to work out if I can get my phone to embed the horizontal accuracy into the Exif data

Maybe you could take one of these Exif tags as fallback into account?

Thanks again for this great piece of software!

Maybe you could take one of these Exif tags as fallback into account?

Done – thanks for the info, Stephan! It’s amazing how much variety there is among different cameras when it comes to Exif tags.

There is also a text button when uploading pictures – use it to enhance your pictures with valuable information on what we can see on the pic, key info, tipps for the ascent or the summit etc.

Wow - that was quick!
Just tested it and it works perfectly now!

If only my camera would tag the correct shot angle. The smartphone contains a magnetic sensor, but it seems, it isn’t very reliable - maybe 1 out of 8 photos are correct …

This is really great! Awesome work. The SOTA Atlas is one of my go-to tools for pre-planning. Again awesome work and awesome product. Thanks & 73!