So, I was flying over to Hannover in Germany for business reasons, and thought why not activate some SOTA summits while in the area. I asked on the reflector was there any local activators and both Chris @DL1CR and Pom @DG7ACF got back to me

After leaving my home QTH in Mid-Wales at 00:30 hours on Sunday morning, I arrived in Hannover midday to be picked up by Chris who had kindly offered to take me to two local summits in Hannover. I was very excited and looking forward to activating using ‘DL’ before my call-sign. Chris arrived, we had a good hand shake and brief chat before leaving to tackle the first summit of the day - ‘Grasberg’ DM/NS-107. I must admit, the scenery in Hannover was very similar to my home country, Wales. Green fields, lots of wooded areas and large forests, but slightly flatter ground. We arrived, Chris parked up and it was time to go: 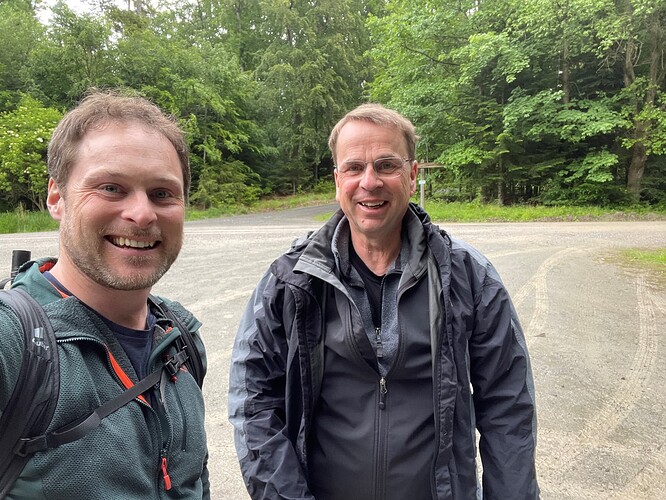 After about 5 minutes of walking, the heavens opened and it started to pour down - I said to Chris it was like being back in Wales, hi!
We had a nice walk on very wide paths with a gradual climb to the summit AZ zone: 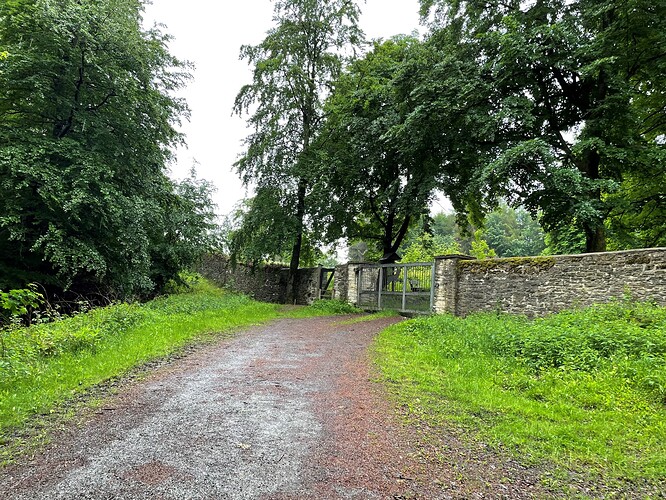 Once arrived, I set my equipment up on a luxury bench, (we don’t get these in Wales!) which consisted of a homemade very compact linked di-pole antenna for 20m & 40m, that I had made especially for the trip. This was sat on my 4m tele pole, fed into my Xiego X6100 radio pushing 10W with the 14.8v Sunpadow external battery: 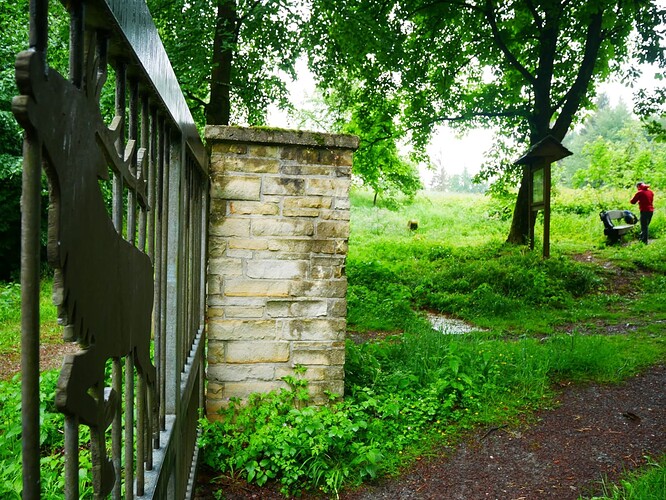 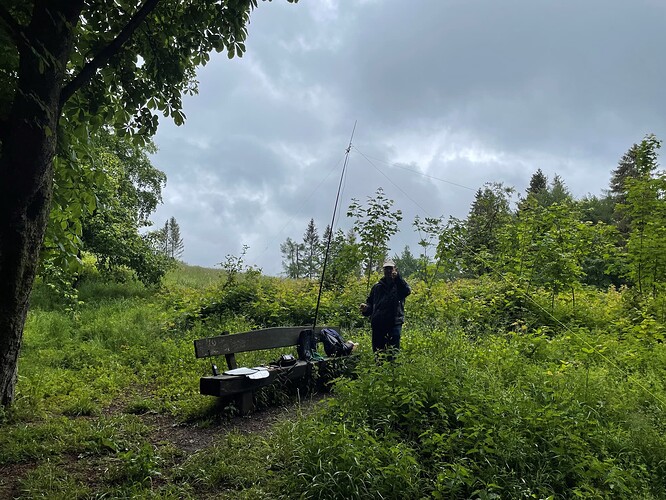 I first put a spot up on the 40m band, called CQ SOTA using my ‘DL/G4BML/p’ call-sign and managed to work a great pile-up finishing with 33 itl. Conditions seemed to be good! I then called out on 20m only managing 2 itl and I ended with a S2S on 2m FM with Pom who was activating the next summit Chris and myself were going to - he was warming the luxury bench up for us! hahaa.
After putting some final call-outs and receiving no response, it was time to pack up and make for our descent. On the route back, we were in touch with Pom, and decided to all meet up at a very good pub/restaurant for some lunch before moving on to our next summit.

We parked up, met Pom and went for lunch and a traditional German ‘Weiss Beer’ - my favourite! 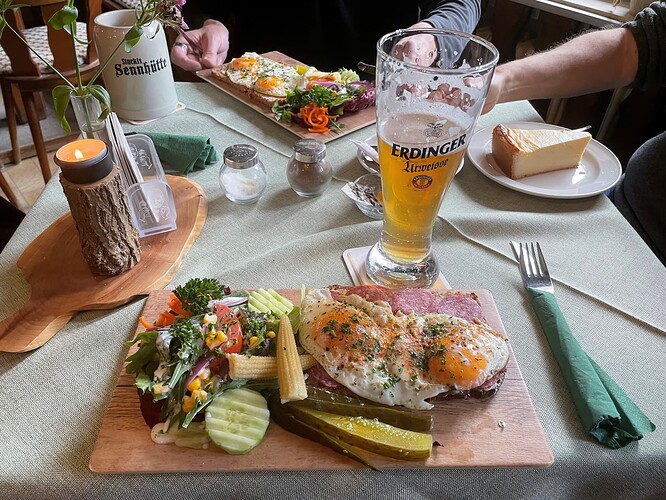 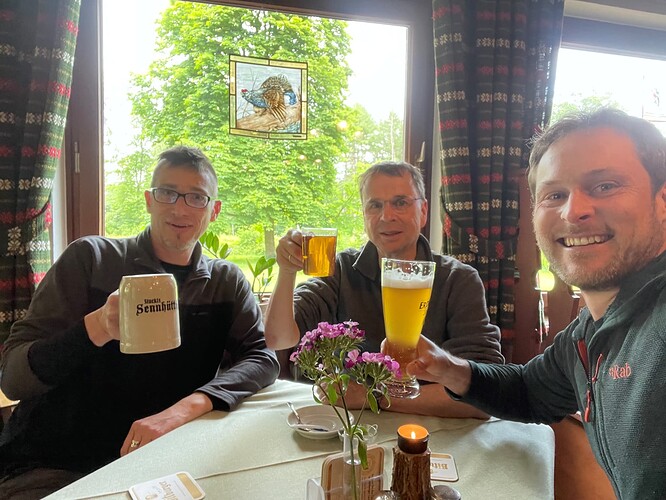 It was cheers all round and then time to walk our lovely food off! Pom moved on to our previous summit and Chris and myself began the hike to ‘Fast’ DM/NS-121: 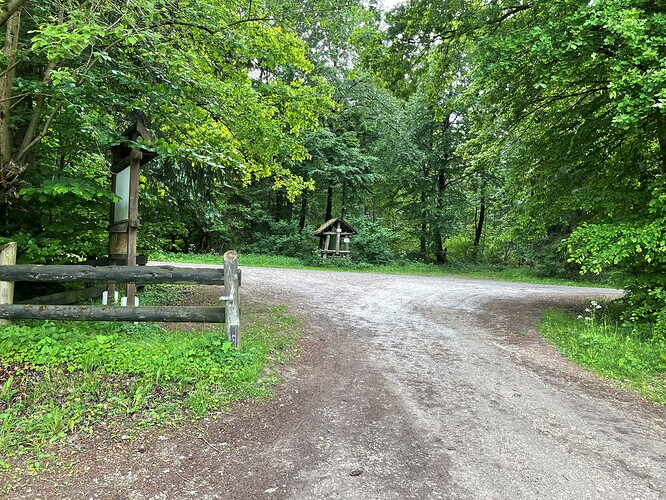 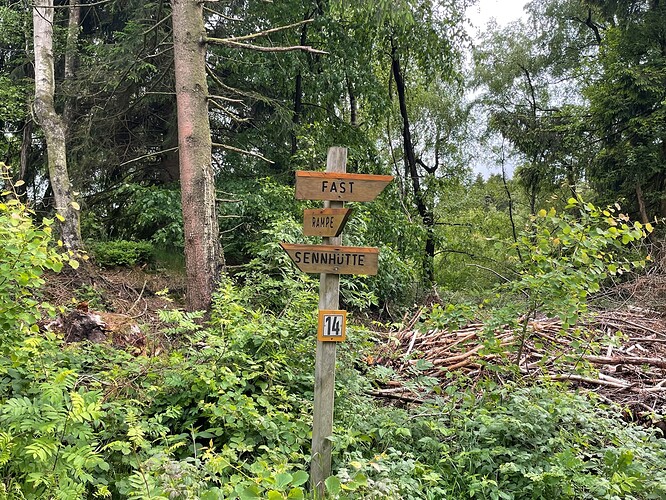 Again, this was a nice gradual climb with wide paths to the summit. Once we had reached the top, I had another comfy bench to set my office up on. This was really luxury SOTA 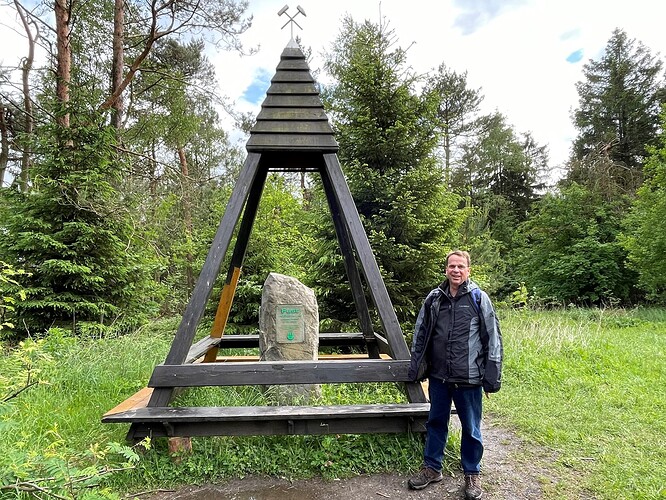 Using the same equipment as before, I spotted on 40m and put out a CQ SOTA call. My activation on this summit was rather like the name… FAST! Conditions had dropped dramatically, so I only managed 6 itl. I then moved over to 20m to work a further 2 stations and ended with a S2S with Pom on 2m for the complete: 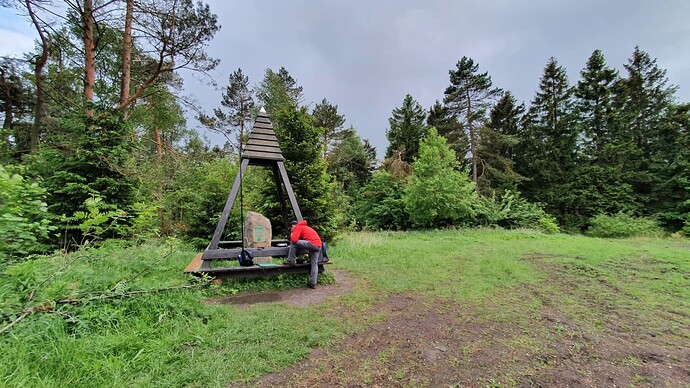 I must say a massive thank you to a very good friend I’ve made, Chris, for your great company and helping me out by taking me to both summits! I would also like to say thank you to another good friend Pom for meeting us and giving me a S2S on both activations to gain a complete. I had a fantastic time and will deffo be over to see you again soon!

Thank you very much to all chasers for your great support as per normal and to any S2S contacts I made on my DM day!

Nice report Ben, many thanks

Another lovely report! Looks you all had a great time, and once again it looked like you were able to enjoy the local cuisine!

Nice report and story, Ben. Yep, these are the nice gents of that region - and you have met them! (And there are more elsewhere.)

Ben, thank you very much for your very pleasant visit, our many interesting discussions and the great report. We had a great time, that’s for sure. I am glad that you liked the two summits and that you enjoyed the food and beer.

We’d love to do that again, there are still very attractive summits to be discovered here.

By the way, I really liked your activating skills, which you can see for yourself here. 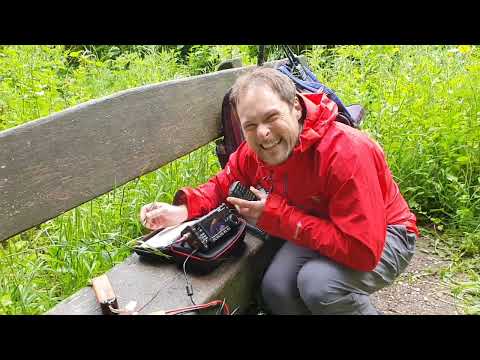 it was a great trip!

Thanks Matt - it was a lovely trip. I do enjoy the German food and especially Weiss beer

no bad head in the morning!

You had a great time

Thanks for the nice report on it.

no bad head in the morning!

By the way, I really liked your activating skills, which you can see for yourself here.

… especially Ben seems to have the better knees than me! I would probably not smile that much after 10 QSOs, hi.

they certainly were gents! I’ll be going back again (if they’ll have me, hi) soon!

we talked all the way and time went so fast! It’ll deffo have to happen again either over in Germany or in Wales if you come over. I’ve always been a fan of the German food and beer, the place we called at was perfect!

Thanks for the video, you can tell I’d been awake for over 17 hours with the bags under my eyes

Hope your enjoying the time away and we’ll catch up soon - enjoy!

Thanks for your kind words Marcel - we certainly had a great time.

Aside from the SOTA bit, the food and the beer at the end looks a nice treat and quite different from our UK offerings. (I too love weiss beer)

Many thanks @M6GYU David. After a few miles of walking, it’s always good to finish with a nice cold pint

Sorry for the late reply, Ben.
It was a pleasure to meet you. Sorry for the reduced menu. Who’d estimate that a restaurant in the state of Niedersachsen (where everybody is mad for asparagus) ran out of asparagus!? Glad you liked Strammer Moritz anyway.

See you next time you come over! There are more even lovelier summits around left to activate on your future DM/NS trips.

That’s not a problem Pom. I was very happy with the food I had

it tasted great, especially after a full day with out eating anything!

I’ll be over again soon, hopefully asparagus will be in stock then! I look forward to it!

Thanks for a great time and it was a pleasure meeting up with you and Chris.