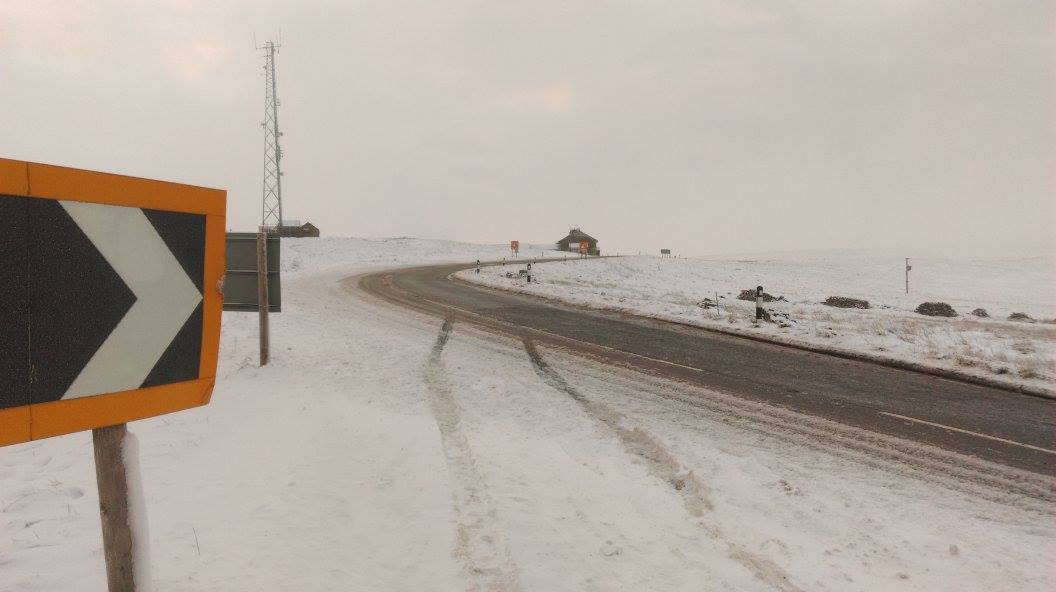 With significant snowfall in downtown Macclesfield during the Saturday late afternoon and evening, I decided a walk up Shining Tor G/SP-004 would be good. I got up just before 7am on Sunday 17th January 2016 and made a flask of coffee. 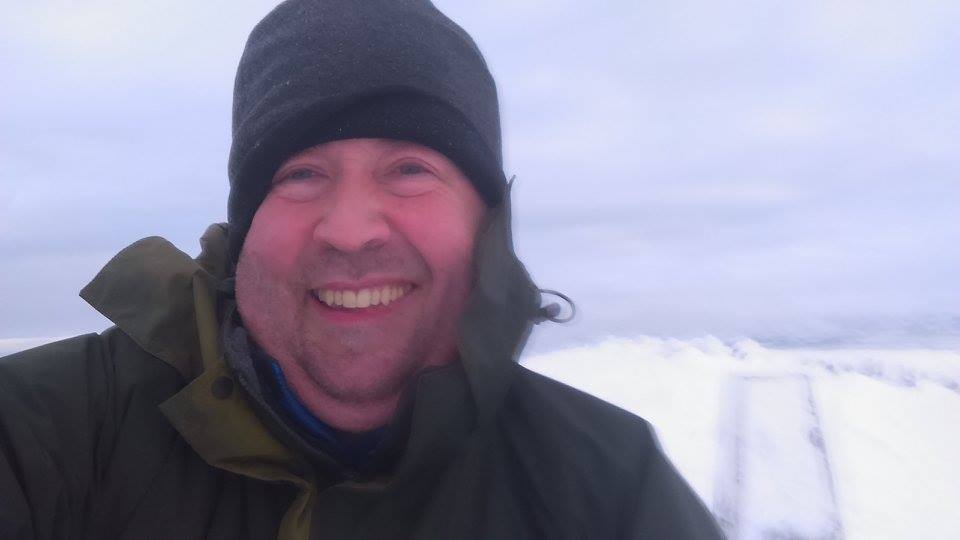 I checked the CatCam on http://www.maccinfo.com which from time to time showed car headlights, and other websites confirmed that the A537 was “passable with care”. I drove up to the normal parking space just before the Cat & Fiddle. However, before parking, I turned my car around so it was facing the right way for going home later, and, importantly, downslope, just in case! 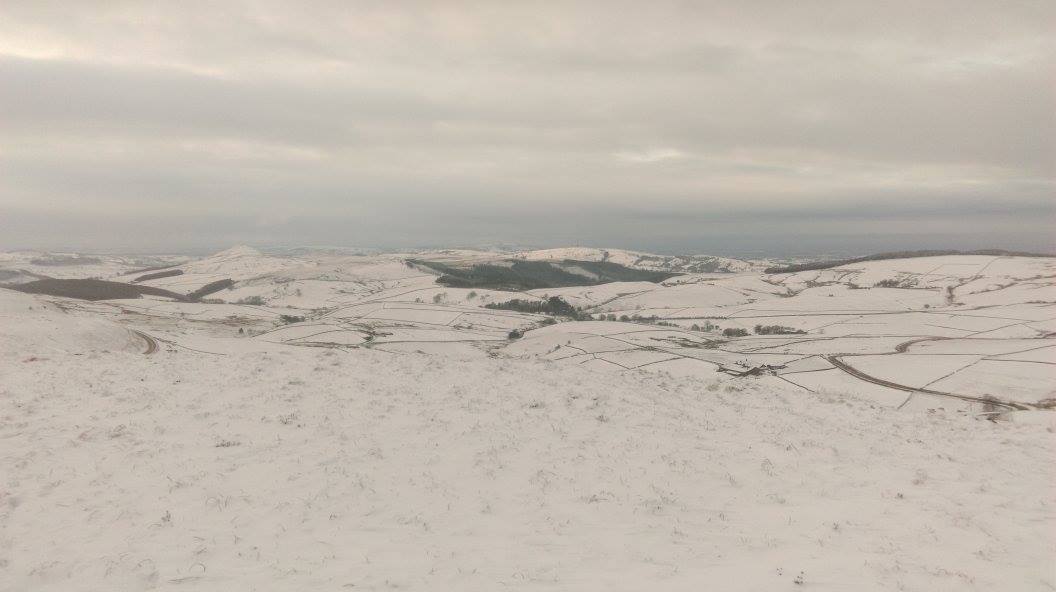 I was the first walker on the paths, so there were several deep snowdrifts to get through, which absorbed some time and energy. Once through the top gate, the traverse across the dip ahead of the summit itself was surprisingly easy going. I was surprised to met a man and a woman with their daughter (about 8 years old) coming the other way, as the snow was fresh, and the only previous footprints were those of grouse. “Where did you start from?” I enquired. “Shining Tor” they replied, and it transpired they had overnighted there. Great stuff. 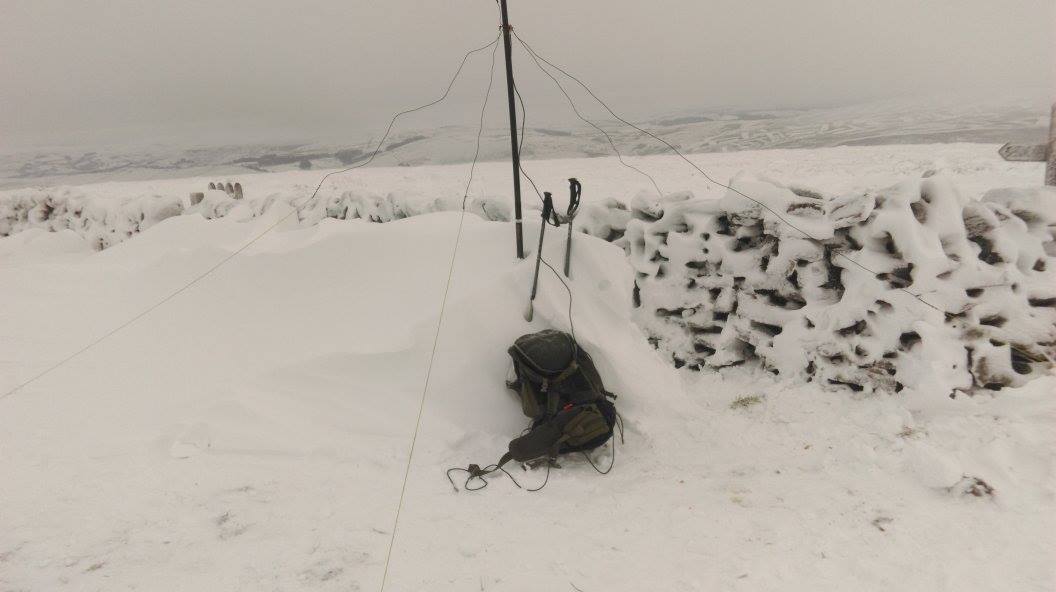 It was useful at the summit to have a deep drift to support my pole, as the ground was hard and not taking pegs. As it was, all that was required was the snow to push the pegs into to spread out the radials. 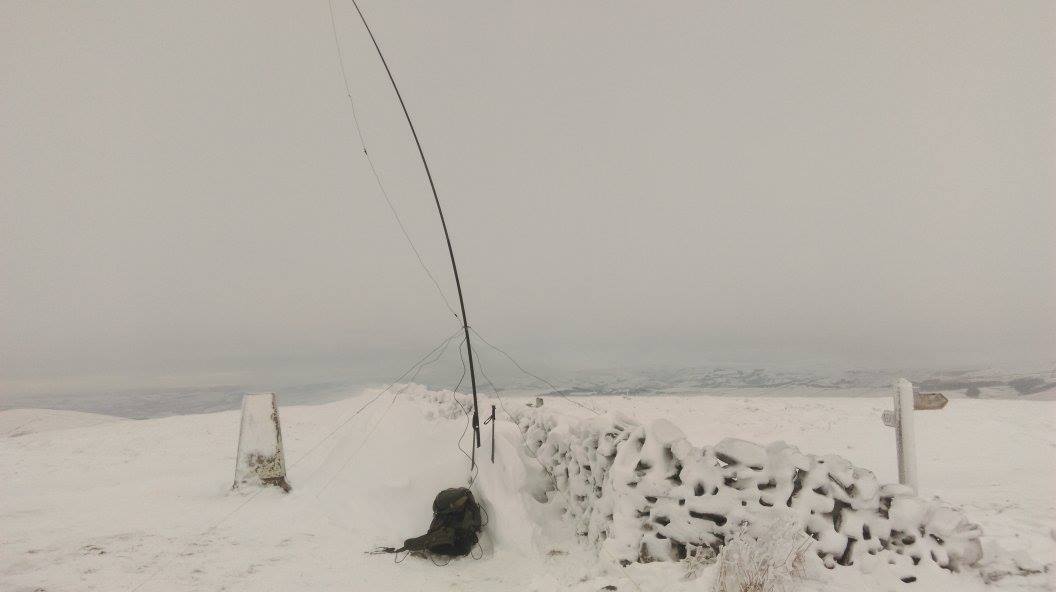 No conditions on 10m, and just three local G stations worked on 10m CW. I think all of them have been worked before in the SOTA Challenge periods too, so I won’t have added to my score. Using the same (10m/6m vertical) aerial, I did a bit on 2m FM and added 8 QSOs. Pleasant. 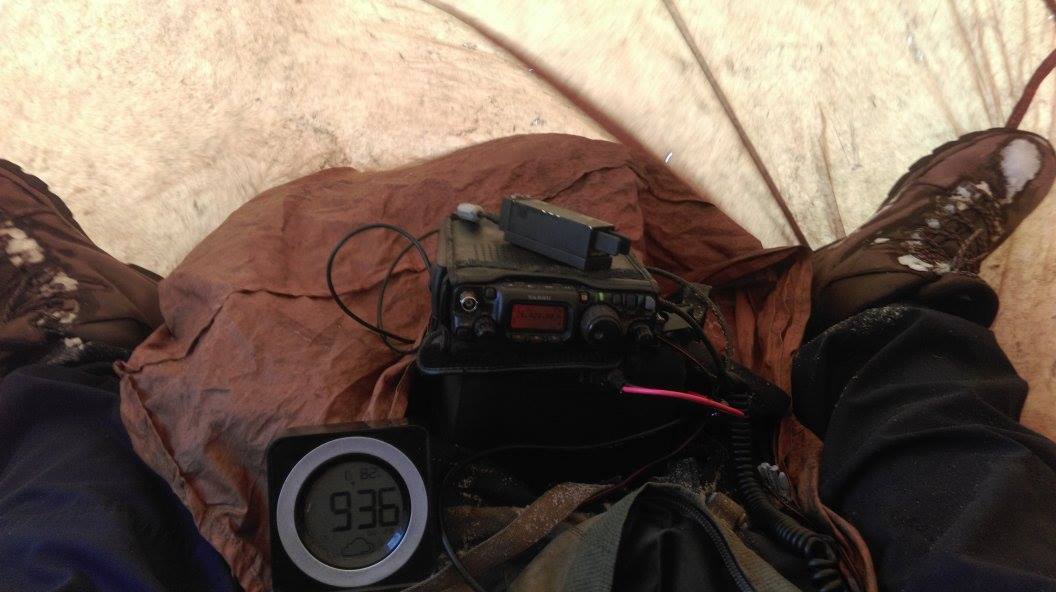 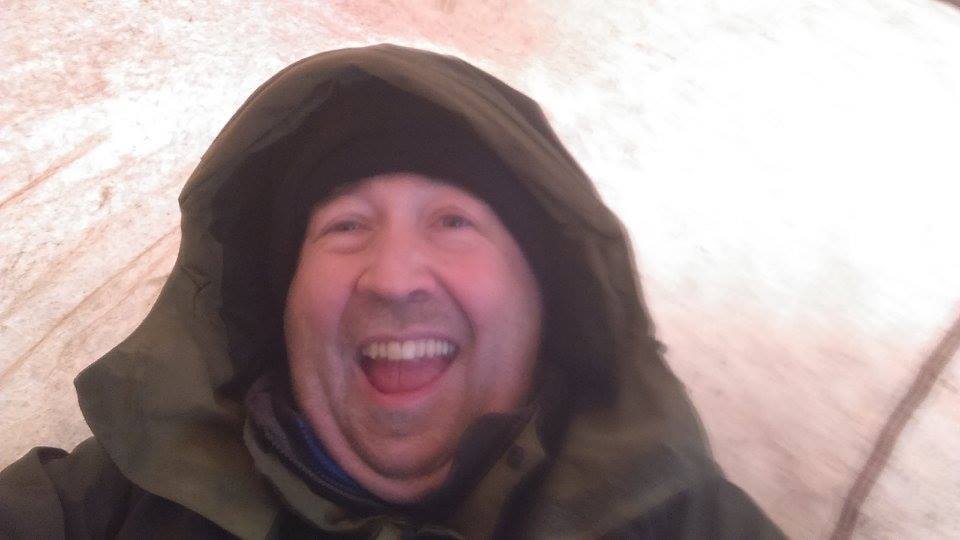 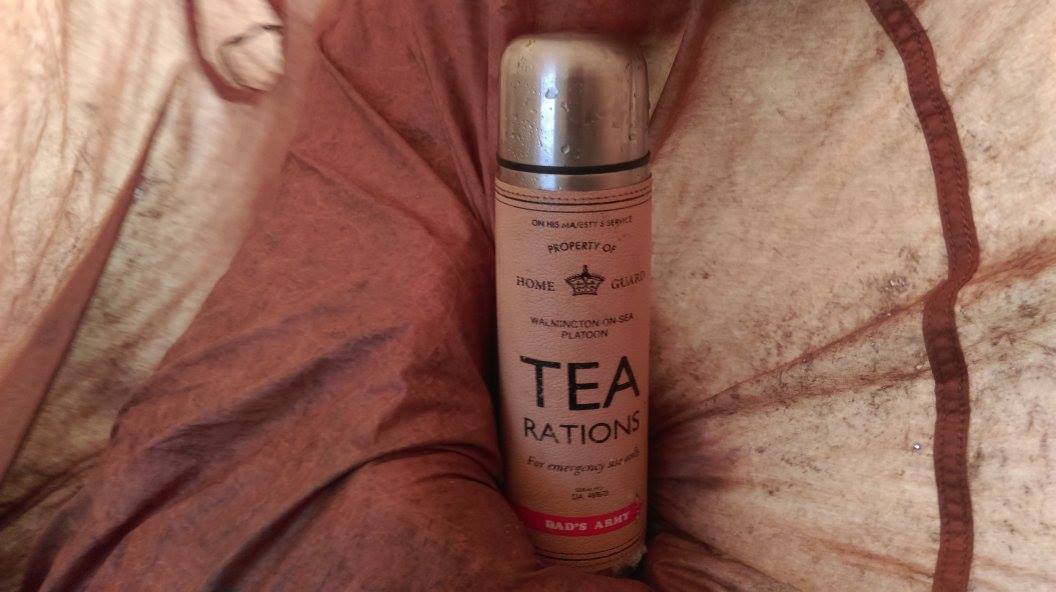 Hope you don’t mind me piggy backing on your thread…

Helen and I had wonderful walk up Pen-y-Ghent (G/NP-010) on Saturday retreating just in time to get back to our vehicle as the snow started in the early afternoon. 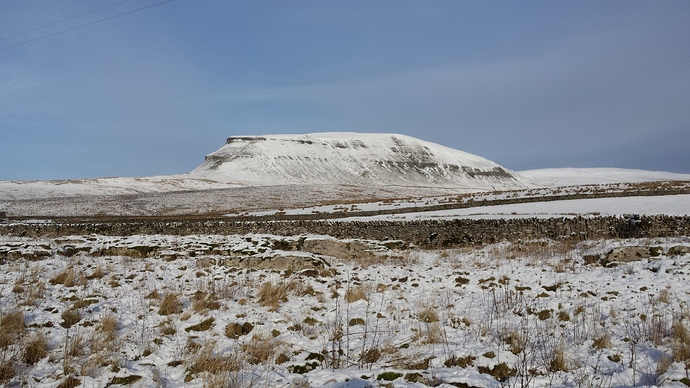 We went up the steep bit on the left. 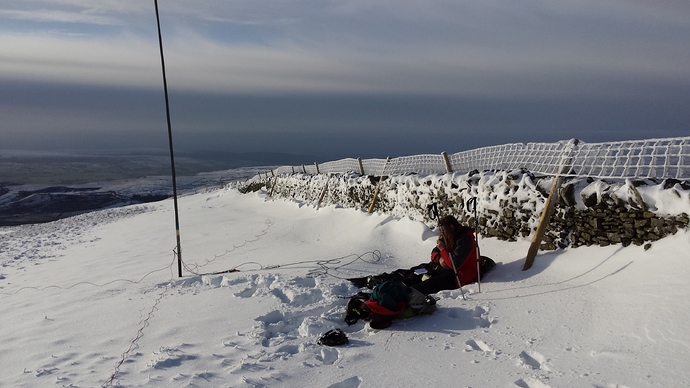 5/8 wave vertical (10m pole) needed no guy-lines with the pole pushed into a snow drift.

I was out on Buckden Pike on Saturday, the weather was superb. Strong wind was predicted in the forecast I looked at but on the day the conditions were extremely still. 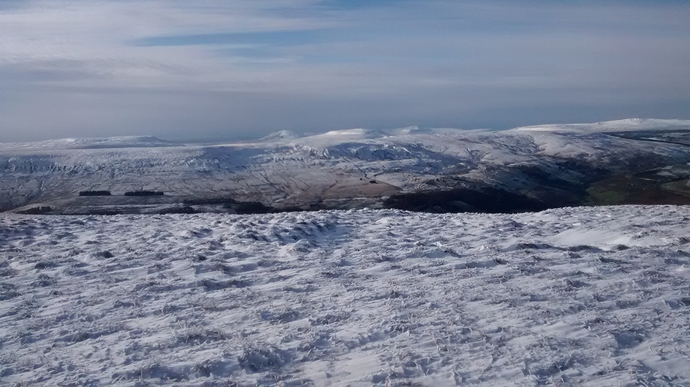 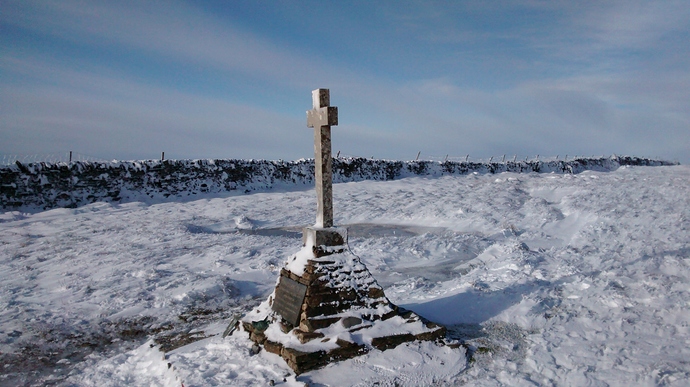 Pen Y Ghent and Fountains Fell had been my target, but I thought the roads would be icy. I elected to set off later from home and switched to Buckden Pike instead. I squeezed in a quick trip up Sharp Haw G/NP-029 on my way home and just got back to the car as it started snowing and the light was fading fast.

Temperature was still low as I left home - 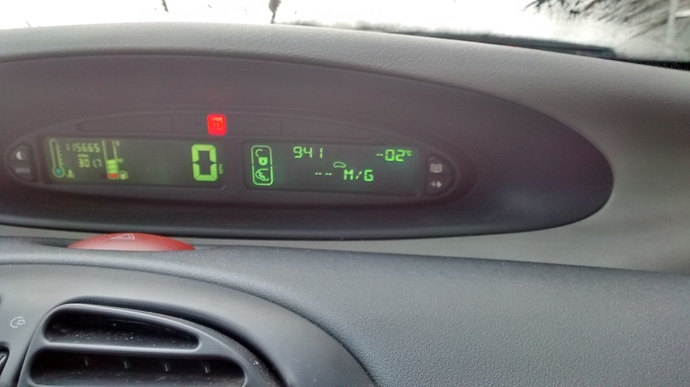 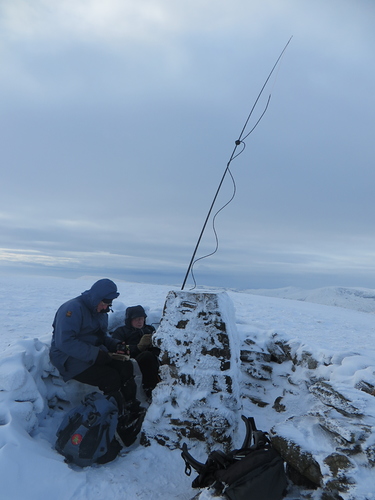 There fell a lot of snow in the Bavarian Alps during the last days.
Ascent to DL/WS-058 - Hoher Kranzberg 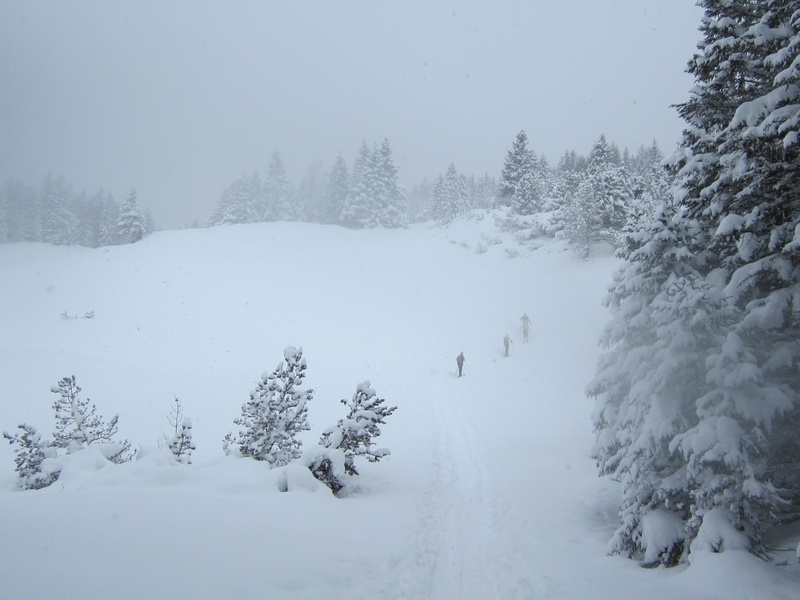 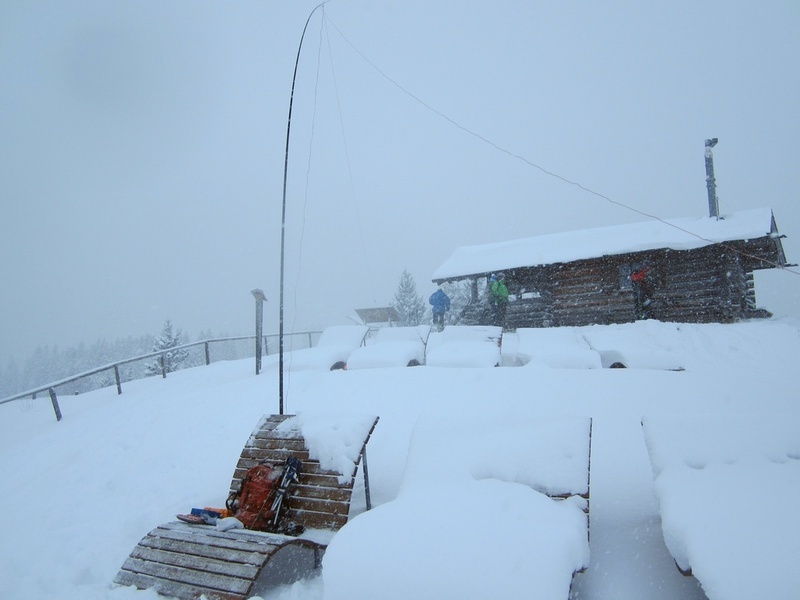 Nothing better than being out in the snow (with good clothes etc!). Pendle hill was so popular yesterday the paths had been smoothed into ice rinks (especially by all the kids on plastic sledges). I wished I’d had crampons, though that would have looked strange alongside the trainers and wellies some were wearing. 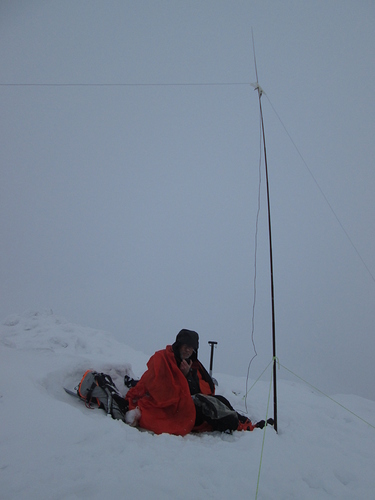 Deep snow in Glencoe over the weekend. Vis was poor on the summits; GM/WS-097.

In it amazing how snow changes the landscape so much yet so lovely.
And please be careful up there.
And ya all bloody mad

No snow down here as yet.

Some fresh powder fell on the hills in southern Poland in the last few days.
Activated SP/BZ-080 Wierzbanowska Góra yesterday, walking in ankle-deep snow. Due to QRM from the HA DX contest made only 7 contacts on 20m, but the walk was very nice, so overall very satisfying first activation of 2016.

Wierzbanowska Góra is a wooded summit, but there are two clearings within the activation zone, one of them with an old hut: 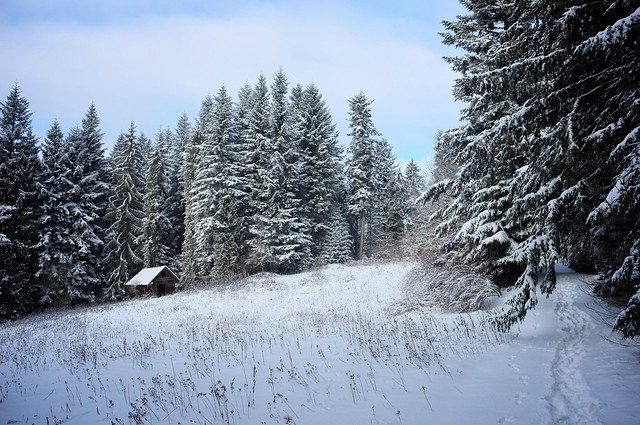 From the descent path there are nice views to other SP/BZ summits, here Lubogoszcz SP/BZ-039, with Luboń Wielki SP/BZ-031 hardly visible to the right behind it: 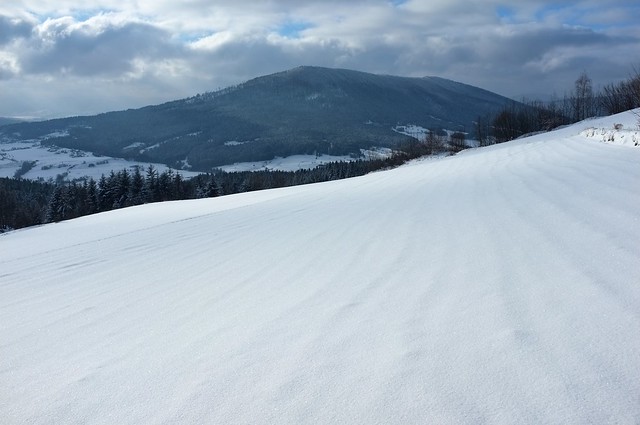 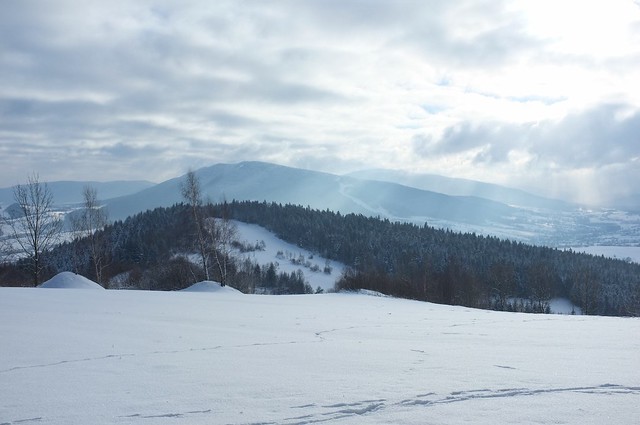 Well, I can’t match the photos for quality or subject matter, but there was also snow here on Cyrn y Brain today 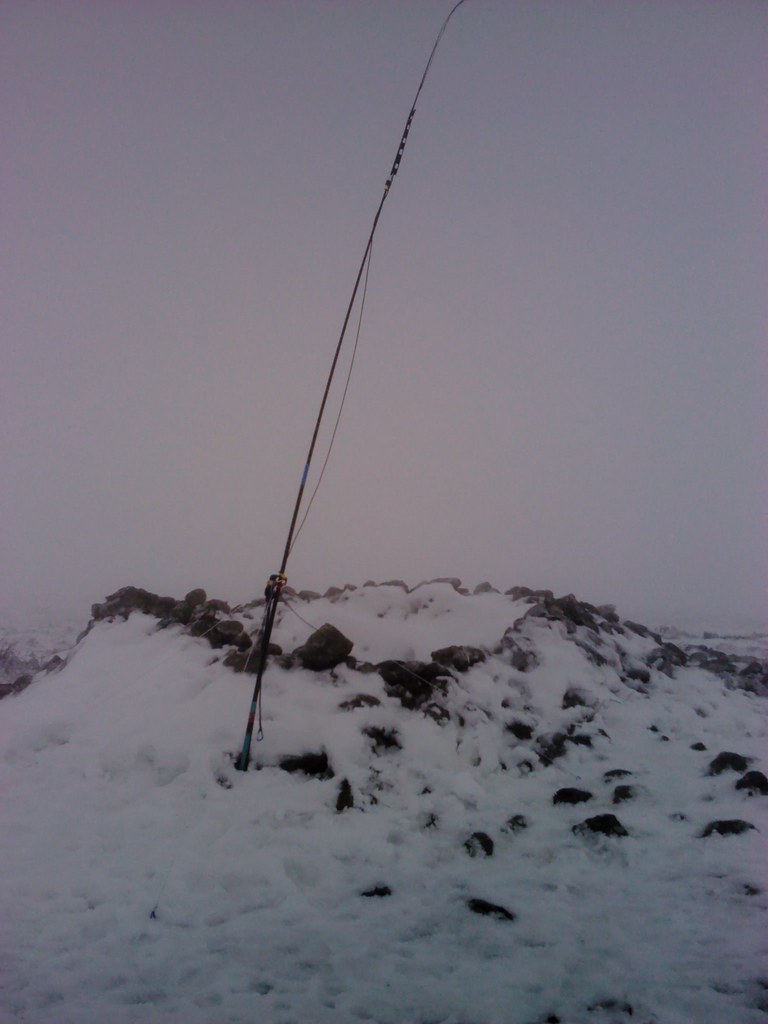 and here on Moel y Gamelin 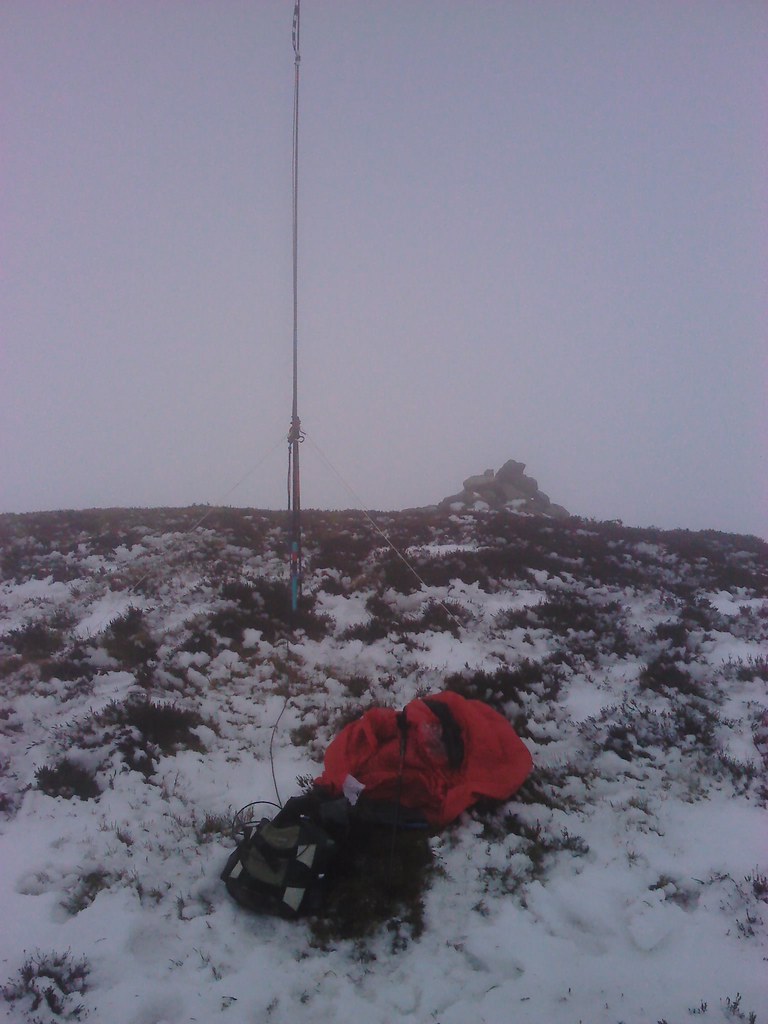 Not so bad inside the bothy bag 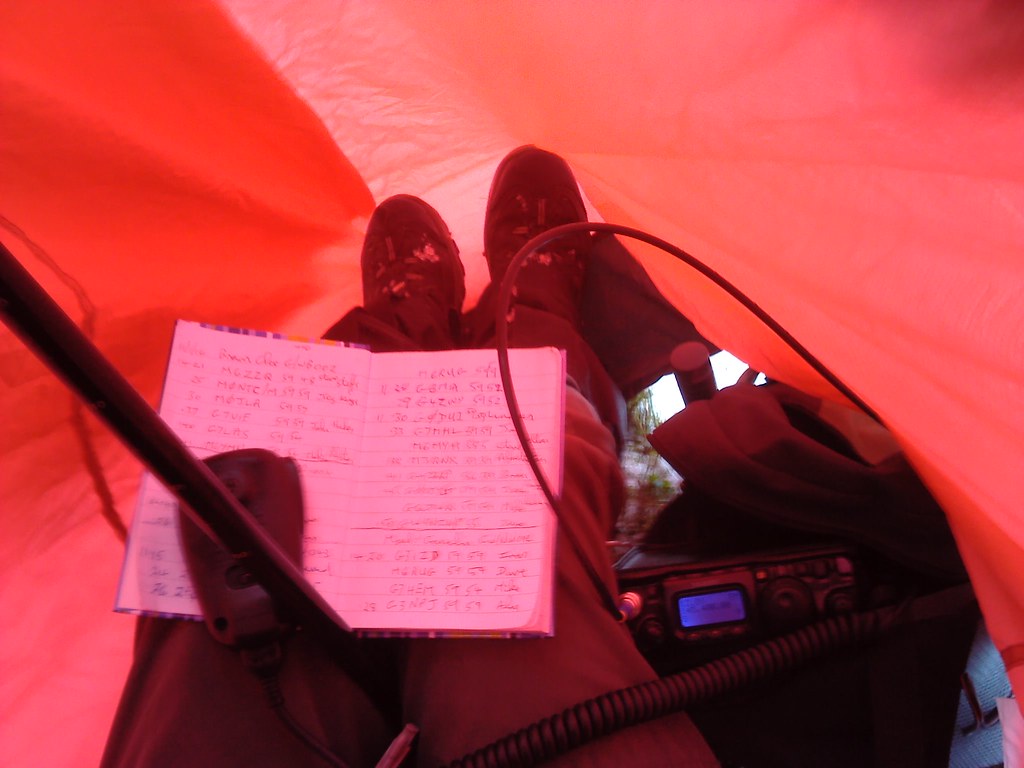 The wind had kept the summits relatively clear, but there were a few nice drifts to wade through on the way up

Ah, a clean bothy bag. I remember them…

Doesn’t look much different, wasn’t the snow heavy near the top though ! up to my knees !

That’s probably what I slipped on, and I thought it was snow!

Snow was deep in places, I walked up in the heather for much of the way as the track was knee deep as you say…

I walked up in the heather

That is what I did as I kept sinking in and could not move. Near the top it got more solid so I traversed back onto the road.

Well done, that was hard work.

Suggest anyone out in fresh deep snow in the UK considers snow shoes.

I use a fairly basic pair of TSLs. Makes a heck of a difference on typical British ‘rolling hills’ with drifted snow. The basic crampon is also useful when you get on compacted paths too.

They are very intuitive to use (just never try walking backwards).

Clearly once you get onto steep ground on big UK mountains you need proper 10 or 12 point crampons, an ice axe and the skills to use them safely. Which needs a lot more skill than snowshoeing.

Some examples here (other makes and retailers are available etc.)
http://www.decathlon.co.uk/C-593222-snowshoes

Finally, don’t forget avalanche hazard. Use ground conditions reports and learn the basics about safe travel in avalanche terrain… which can be in some unexpected places… largest number of deaths in the UK in a single avalanche… off the South Downs onto the town of Lewes

The Lewes avalanche occurred on 27 December 1836 in Lewes, Sussex, when a huge build-up of snow on a chalk cliff overlooking the town collapsed into the settlement 100 metres below, destroying a row of cottages and killing eight people. It remains the deadliest avalanche on record in the United Kingdom. The town of Lewes is about seven miles north of the Sussex coast, on the River Ouse in a gap in the South Downs. Hills rise above Lewes to the east and west, with Cliffe Hill to the east rising ...

I’ve seen post avalanche tracks in the Clwydian hills. Here is an article on a fairly sizeable avalanche in the Peak District a couple of years ago.

THIS was the scene after an avalanche of snow narrowly missed a vehicle in the Peak District.

Yes a decent crampon set is needed I think Gerald. I did not expect it to be so deep on a small hill.

If the conditions are such that crampons are necessary then some instruction in their use is also necessary. Winter climbing on snow is a game needing more skill than you need in summer - avalanches can happen on surprisingly low angle slopes, and it is fatally easy to lose control of a slip. On the other hand, the mountains under snow offer an exhilaration that is hard to beat!

They are very intuitive to use (just never try walking backwards).

Wow, I never tried that!