Just a quick report on my activation today of G/SP-004 Shining Tor.

With the end of the year looming I was reminded of a challenge I had set myself earlier in the year. I wanted to get into the top three G/2021 Summit2Summit Honours List. I know it says ‘SOTA is not inherently a competitive activity’ but try telling that to a bunch of chasers all trying to get your attention during a pile up

. As the year progressed I was almost derailed, when I had to have a tumour removed from my leg. However after a quick recovery, I was back on track within three weeks. As the points started to accumulate, I set another goal of trying to get 2,500 S2S points in a year.

With the year drawing to the end, I started to realise I needed to make a concerted push. On Christmas eve with high hopes, I made my way to one of my local summits, Shining Tor. Unfortunately it seems many of my fellow activators were out Christmas Shopping, so after two hours, I only got 3 S2Ss and 14 points! After Tom’s (M1EYP) Christmas thread I was tempted to try Christmas, but the lack of enthusiasm put me off.

The weather report this morning (Boxing Day) was awful, but as they say ‘needs must’, so I drove to Shining Tor again. I have to say with thick fog the scene when I arrived at the Cat and Fiddle was not the most inviting. 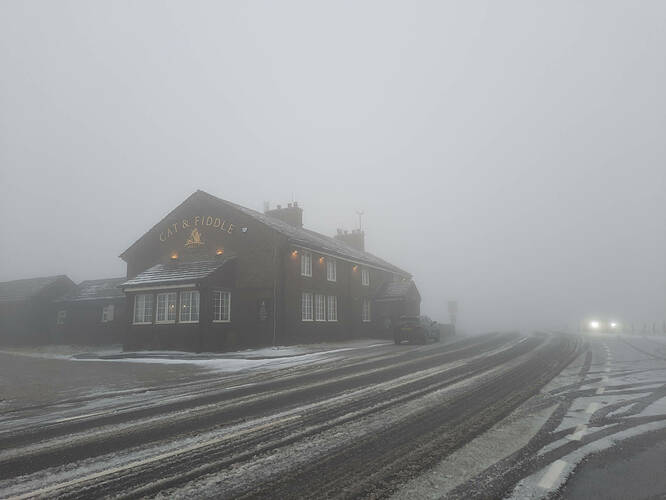 After a short walk to the summit, I set up about 20m from the trig point. Initially I tried a Kisu/Emergency Shelter, but my glasses kept steaming up. So I resorted to a Tarp, next to a Wall. 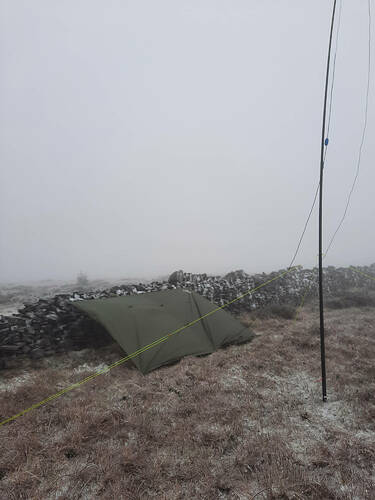 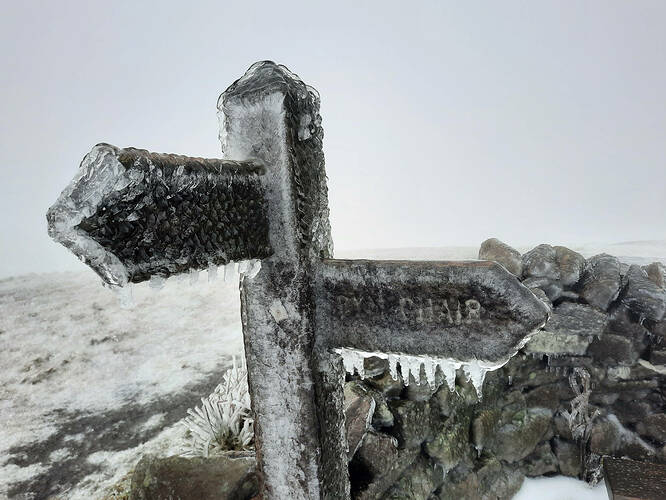 There was a bit of Drizzle, but under the tarp I was toasty! A few minutes lated I got SV2RUJ on SV/TL-080. Things were looking up! I worked 20m on my Xiegu G90 and then shifted over to my Yeasu 70D, when I saw a spot from GW4BML/P on GW/NW-044, Ben can always be relied on, usually working two or more summits in a day!

After spotting myself, the QSOs rolled in on both 20 and 40m. In the end I got 59 contacts and 10 S2Ss, with a total of 48 points. Many of the Chasers that I have worked all year, were there… Thank You! You know who you are. 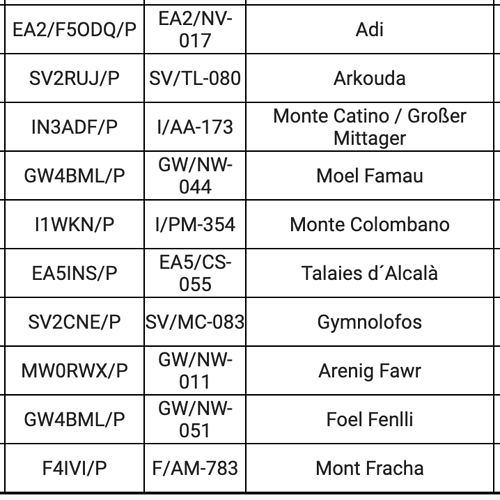 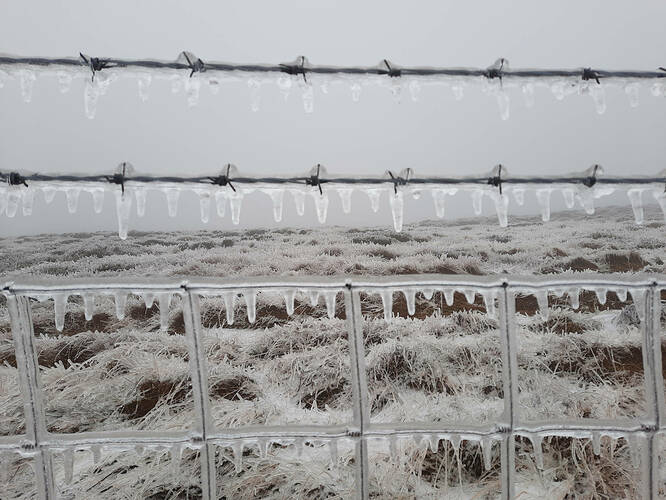 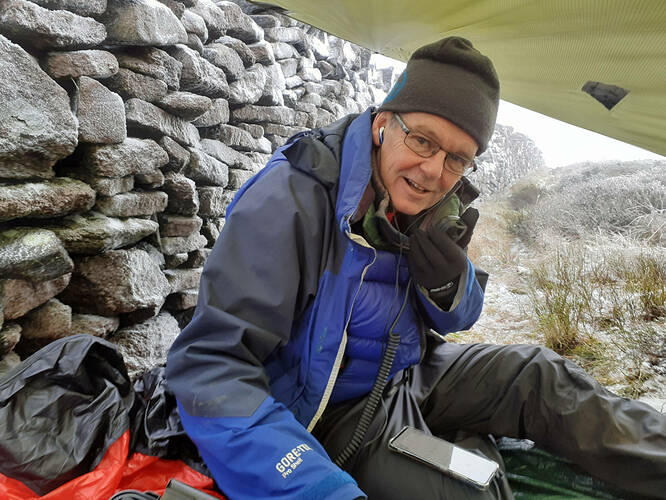 Looked cold up there today Martin. Thanks for the contact & points today though. Good luck with your 2500 points by the end of the year.

You were a strong signal into Devon on 40m and I listened while you handled a big pile up very calmly I thought. I waited a while to try and jump in but couldn’t find a gap. So I went back to testing the new home QTH antenna I’ve just built - it’s a doublet but is too big for SOTA use unless I make a half-sized one.

I hope you have some dry weather this week to complete your goal. I was planning to be on a summit on Tuesday but this is looking doubtful now with strong gales and rain forecast.

Sorry to have missed you John! Devon was good on 40m today. I am planning a trip to Ingleton this week, so hopefully will get you from Ingleborough G/NP-005. Happy New Year!

Just a bit of an update…after a couple of hours on Ingleborough G/NP-005 today (28th) I reached the magic 2500 S2S points for the year. Thanks to everyone that helped and all the chasers that have kept me company! On to 2022 and new challenges! Happy new year! 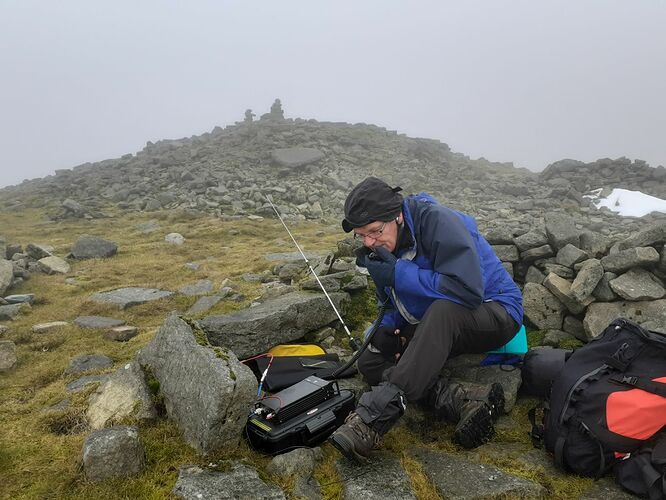 Many congratulations. An impressive achievement!

As we puzzle over unseasonably warm temperatures (60s to 70F) in the US Southeast, it’s good to see some normal winter weather! Well done.
73,
Scott WB8ICQ

Could we swap for a few days

the forecast for the next few days is wall to wall rain!

Oops. Too late OM. I enjoyed dry weather on my activation of W4G/NG-020 on Dec 25, but forecast now calls for rain starting this evening. Warm rain…

Throw in a McVittie’s Jamaican Ginger cake and I’ll see what I can do. Can’t find the stuff over here (maybe fortunately).

@M7BIA Well done on the 2500 Martin, thanks for all the chaser points.

Thanks for the S2S today (from EA3/BC-016, see more pictures), albeit I could only provide one point for your personal goal. But better than a sharp stick in the eye, as some say

This was my second summit today in EA3 and it was about 20C, which is an unusual high temperature for this time of the year. 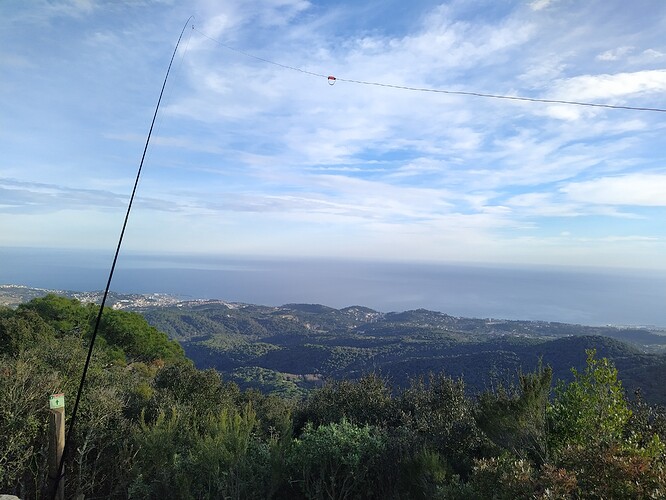 But I don’t complain, since two days before, when I activated in the Pyrenees, my radiator wire put ice on. OK, the altitude was a bit higher

This was my second summit today in EA3 and it was about 20C, which is an unusual high temperature for this time of the year.

Ha ha the stuff of dreams. Thanks for help activating the summit and every S2S point counts, I am not proud!. Enjoy Spain!

In at the deep end with no arm bands … I bet you’re still buzzing.

It has been a blast. I have always spent a lot of time in the hills, so SOTA has added more fun. At the moment I don’t even run a radio at home.

Not sure what the challenge will be next year?

Hi Martin,
Many thanks for the summit-to-summit between Shining Torr and Fairfield on Christmas Eve - once I got the rig changed that is! Sorry you had to wait. Your target and your quest to get there make amazing reading. I can feel enthusiasm oozing out of the page. Keep at it and I think you’ll get there. So close!
73, John G4YSS

Keep at it and I think you’ll get there. So close!

Cheers John, with a trip to Ingleborough on the 28th I got there. We have worked a few times this year, so thanks for your contribution to the points!

It was interesting when you changed radio on Christmas Eve. Despite less power your signal hardly changed, but you were obviously receiving me much better.

Hope to catch you again soon.

Many congrtulations Martin and thanks for the many s2s. Glad I was able to help a bit with your task. I began to think that you lived up Shining Tor (like Mick YYY used to) but had no idea of the splendid challenge you had set yourself. Look forward to hearing of the next one.

I am interested to hear that you don’t have a radio at home so your QTH this year has certainly been G/SP-004 as you have been there so often. There are numerous radios (belonging to M0JLA) at home that I could use but I confine my radio activities to SOTA and only appear if someone local on 2m is desparate for a 4th contact - and then I find it impossible to remove the ‘/P’ from my callsign which gives them a good laugh as well as an extra contact!

Good to see you up Ingleborough and able to complete your challenge. We hope to be out (despite the forecast of high winds) tomorrow and I will listen out for you - just in case you are still ‘hungry’ for yet more points - but you probably have more sense!! Keep up the good work - and enjoying yourself.
73 Viki

When I was Ingleborough I had to stop myself saying G/SP-004 a few times. So I understand your /P issue!

The weather up here in Yorkshire is awful at the moment, we are in campervan and yesterday had to take the awning down, before it blew away. So I am not sure where I will be activating from tomorrow.

Thanks for all the QSOs this year, you have certainly added to the tally!

Have a good one tomorrow I will look out for you.