The paddle is a fairly new product by Sebastian Stetter, DJ5SE.

The key is quite similar to the Palm keys, although the size is a bit different, being larger than a Pico paddle but smaller than a Mini paddle. 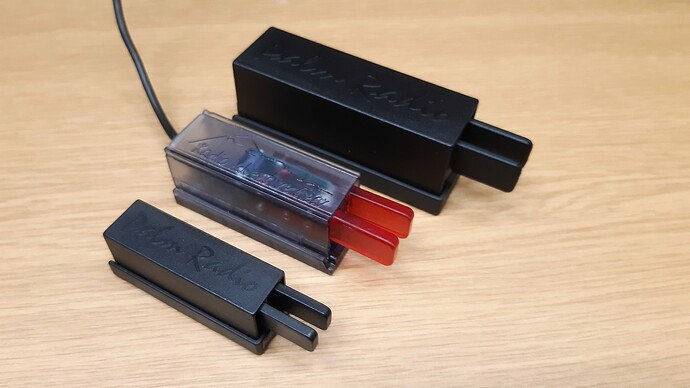 I ordered my key and it arrived in just a few days from Germany. The key came packaged in a little cardboard box, that itself in a brown cardboard envelope. The envelope was a little bit battered, but the box key itself was OK. 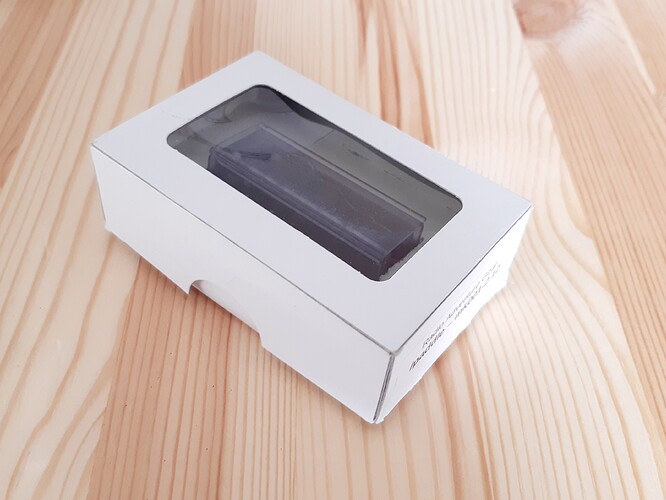 It appears to me as if the key has been professionally 3D printed. You can still see the layers, but it’s much finer (higher resolution) than those very cheap keys from China. I think the key will improve with age as the plastic gets more polished.

In use, the key is very similar to the Palm keys, although I would say that the Palm keys are a little more refined. I keep my Palm Pico key in an Altoids tin and I use the base with strong magnets in to attach my key to the tin in order to use it as a base. I find the Pico is too small to grasp in my hand and I end up with pain if I hold it for a typical activation. The Radio Adventure Gear paddle isn’t too bad to hold but unfortunately the base doesn’t have a magnet that’s strong enough to attach it to anything. The magnet in the base of the Radio Adventure Gear paddle seems to be just designed to hold the provided little hex key for making adjustments. 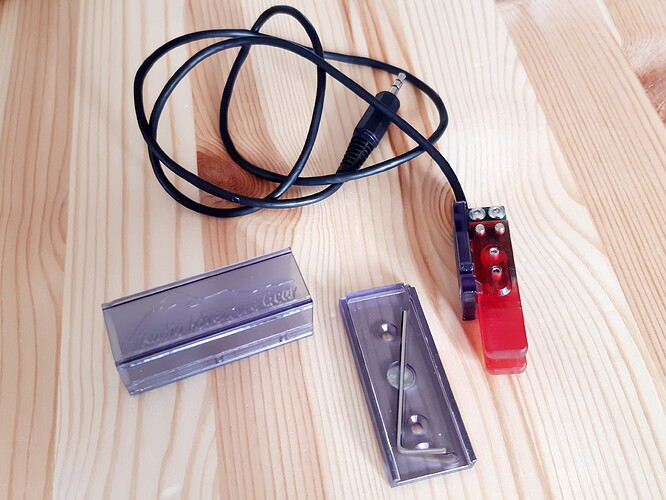 The one thing that I don’t like about the Radio Adventure Gear paddle is the cable. The cable is fixed - Sebastian puts this forward as a feature, so the cable can’t be lost. I’d prefer a detachable cable as it’s the most likely thing to break. My Pico Paddle is a very early one and the cable wiring was 'reversed, Palm stating at the time that it was a simple matter of swapping the dits and dahs over in the transceiver firmware. Unfortunately my MTR Transceivers are hard wired, there’s no firmware option to swap the paddle sense. I made myself a little lead for my Palm Pico with thin, very flexible cable and I hard wired the connections to correct the paddle sense. Later Pico keys had the wiring sense corrected to ‘conventional’ sense. (There isn’t actually a standard for Morse key wiring I’m lead to believe). The wire I made for my Pico has provided very good service, I’ve never had to repair or replace it. The cable used on the Radio Adventure Gear paddle is rather thick, a bit like the original Palm Mini cable that was prone to failure. (I once had my Palm Mini cable snap during extremely cold WX on Helvellyn G/LD-003, I mentioned this on the SOTA reflector and I received an unsolicited and improved replacement cable direct from Palm Radio - awesome customer service!)

In summary, the Radio Adventure Gear /Paddle is a fair substitute for the Palm keys which are sadly no longer being made. The quality of the 3D printing is quite nice. Mounting options are a bit different to the Palm keys and extra bases are available separately. The base can be attached to any of the four sides of the key, so it might be good to attach to the side of a rig. 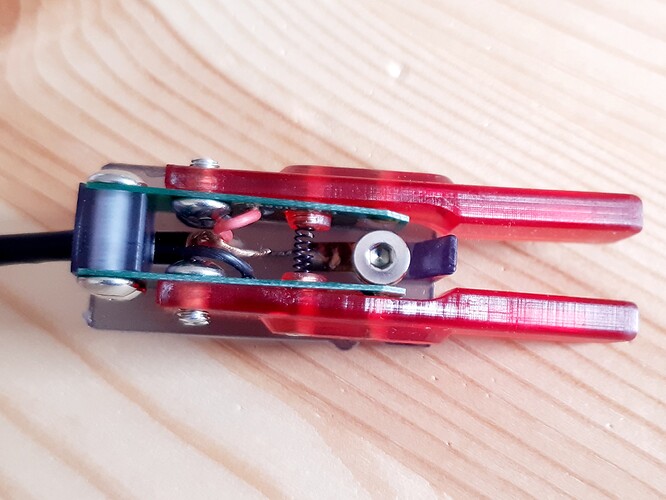 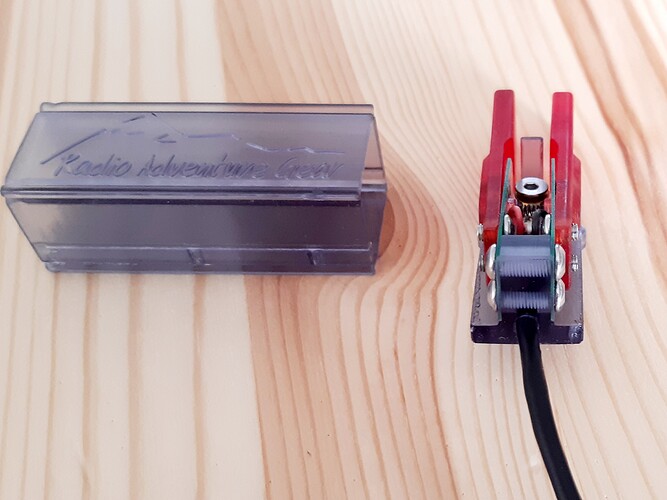 The key is available direct from Sebastian DJ5SE -

I have no connection with Sebastian except as a customer, buying one of his keys - 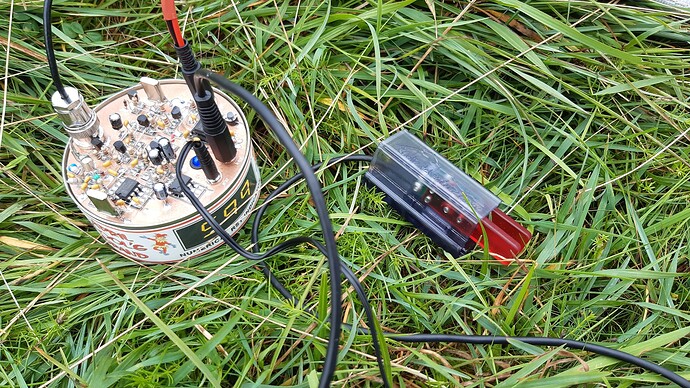 I’m glad I bought the key, although the Palm Pico is definitely my favourite key.

Hi Colin,
About the magnet… I have stick 2 little magnets (used in kitchen locker doors).
They are strong enought; see the photo.

I have yet to use mine on a activation but I’m looking forward to it ! I do wish the Cord was removable but besides that I like its build and design.

I used my Radio Adventure gear paddles this weekend and over all I’m Impressed with it my only gripe is I was having issues with the dits sometimes activating the Dah and it was messed me up a couple times sending signal reports, I do however think this was potentially a fault in myself for tightening the paddles possibly a bit to much, I will adjust and try again and update this post when I do.

The pawls on my Radio Adventure Gear paddles are now very slack into the depressions which hold the main key body into the housing. I haven’t used the key much at all. The issue is not wear, it’s the material that has lost it’s ‘spring’.

Not sure how to fix my issue, but without any intervention the paddle body is very loose in the housing and won’t stay in place. Maybe some (very) gentle warming and teasing out of the pawls a bit? Looks like 3D printed plastic to me.

I used my R.A.G. Paddle on Birks Fell with my Soda Pop rig, mid way through my operating, the paddle started misbehaving and I was sending gibberish. Thankfully I’d packed an MTR back-up set and it contained a Palm Pico Paddle. Switching to the Pico paddle meant that I could continue with my activation.

I don’t want to give up on the R.A.G. paddle, so today I warmed the base of the key mechanism with my wife’s hairdryer. The pawls sprang out by themselves, they needed no external force at all. After cooling, the key internals are a tight fit into the housing.

So, for now, I think the paddle key is fixed.

Hi Colin,
I have just finished up loading my logs from last week’s activations. I see you have now achieved MG-CW.
My congratulations on your achievement. Well done.

Honestly, I hadn’t noticed. It would take some number crunching to work it out for sure. Andy MM0FMF said he had a means of checking but I never followed it up.

Go to Activator Roll of Honour and select CW mode. Shows you are 8th with 1037 points. I only know to do this because you showed me! You pointed out I was top CW activator in G in 2022 (now second, behind you).

Doesn’t quite work like that Richard, that only shows activations with at least one CW QSO. For CW Mountain Goat, you would have had to score 1000 points with activations consisting of at least four CW QSOs.

Any chance the database code can be updated to only include qualified CW activations?

I solved the problem: I only transmit with a straight key…