GM - To everyone that sent me an email to let me know you are going out, thanks! So far it looks like we have eighteen or so SOTA ops going out. Should be a good day for S2S and Chasers.

Here is what we are doing…

Forty meters will be the primary frequency for CW and SSB but ops will certainly be working forty through ten. Look for ops in the general portion of the bands.

Please post an alert and include PNW Winter S2S in the comment. If you want to work other bands (UHF, etc) be sure to post that in your alert.

Finally, please send me (K7WXW at qrpdx dot org) an email to let me know and I will add you to the list.

Chances are I won’t be able to get out and activate but I’ll chase from home!

At 5pm PT, 00:00 UTC the JA SOTA association starts their activities. Hoping to catch a JA station if I can last that long on a summit.

Looks like rain and snow here in Nor Cal starting early Saturday morning. I will shoot for a Friday afternoon activation in hopes of catching some of the JA crowd .

The party starts at 00 UTC, but no doubt there will be a few early birds since 00 UTC is 0900 in Japan and 0800 in Taiwan. I plan to be active from 23UTC which is an hour after sunrise here.

BTW, I am SKCC member, always looking out for number exchange, especially C, T and S numbers (which are not easy to come by here in east Asia).

So far, I’ve heard from twenty-seven ops who plan to be out tomorrow for the PNW Winter S2S Party. The festivities start at 1800Z (1100 PDT). We will be using 146.58 MHz for FM simplex (backup 146.46) and forty meters for regional S2S but ops will be working across the bands.

One request for the chasers… please be patient and leave some space for the S2S exchanges, especially on forty meters during the first hour or so of the event.

And if you are going out, please remember to post an alert and be careful out there, especially where the weather is going to be challenging.

Thanks to everyone who went out today or chased someone who did. I will be sending an email out with a couple of information requests in the next day or so.

It was a great S2S party. We (WW7D and I) decided to go to a higher summit to escape the rain, and it was a good move. During the several hours we were parked on the summit (in a tent that I hauled up with us) we had: heavy snow, high winds, and then a nice sun break giving us views for a short while. On the way back we were in a blizzard with zero visibility for a while, but by the time we reached the car it was sunny.

Thanks to Bill for organizing and all the PNW ops for showing up despite some pretty bad WX!

I guess the date was picked because it falls within the winter bonus for both Washington and Oregon. Pretty tough weather though. Maybe go to a later date and forget the bonus?

For me, 35 contacts this time, entirely s2s.

Elliott, the bad weather is what makes it Type II Fun.

Hope you enjoyed yourself n spite of the rain/snow/sleet/wind/fog!

I made it out to More’s Mountain W7I BC 070 in Idaho with AF7XJ.
Tough slog to the summit, but worth the 9.5 mile round trip.
13 QSO’s with 8 being S2S, all 40 meter CW.
Weather started hitting us as we arrived back at the vehicles. Made it out in time.
Fantastic trip 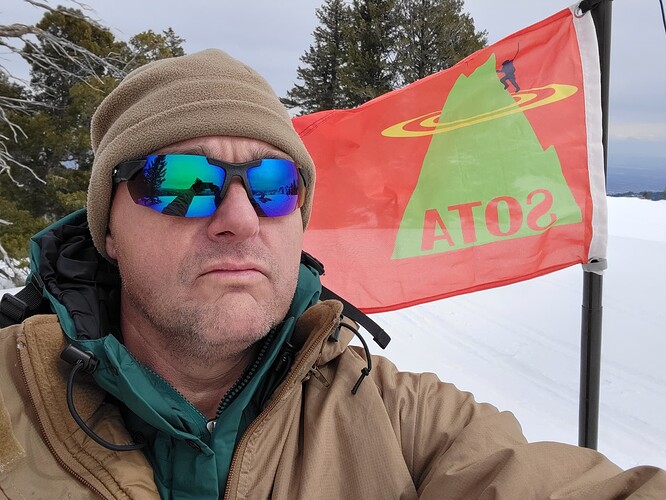 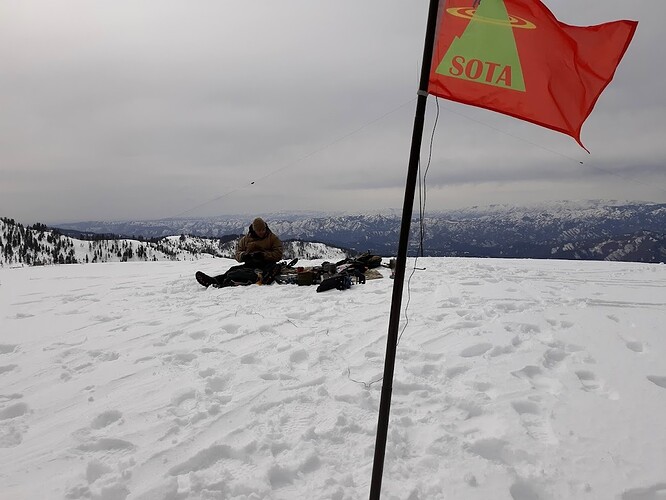 This was my first SOTA activation.
W7W/SO-073 Rock Candy Mountain.

I made 7 S2S contacts. 48 total Qs from the summit.
The weather was a challenge. My hill was pretty exposed to the prevailing wind. 20+mph wind, hail, sleet, slush and heavy rain. It was difficult to keep stuff dry.

My coax gave out in the middle of a 20M pile up. Cheap crimped cable, bad solder joint on the center conductor.

I did a bit on CW, but I have metal paddles, (the notorious EBay Steam Punk looking ones) and it was biting with RF. Holding metal paddles while wet just didn’t work out. In retrospect, I could have turned the power down. I need to sort that out. It could have been that my coax was failing. It was so noisy from the wind, I was having a hard time hearing the CW anyway.

I used my FT-991A and a 1212A Bioenno LiFePo4 battery. Chameleon Encomm II antenna. The trees are short, but managed to have it about 15 Feet up. Certainly not ultra light set up, but not too bad to pack.

My Samsung tablet was too wet to use for logging, so I logged on a soggy map with a pencil. Next time I’ll be better prepared with a write in the rain notebook.

The hill was a drive up, but trees had recently come down, (I mentioned that it was windy), so it was a hike in but only about half a mile. I checked out the location last week and the road was fine, and there was cell service. This time, no cell service and the road was blocked. It took a while to get SOTA spotted, but did eventually thank Danny, K7SS in Seattle.

Still fun, possibly some type 2 fun. I was up for about 3 hours before heading down to the truck.
Everything is now dried out well, nothing damaged that isn’t fixed now. New plug on the coax.

Glad you made it out Duncan - great to get that S2S with you! Rite in the Rain logbooks are standard issue here - sorry I should have told you that =) You can get them at Home Depot for cheap.

We will have to team up for an activation soon!

Duncan, it was great to get you on your first SOTA. I would not have lasted 48Qs without some serious bothy or a tent. Good signal into E. WA. Thanks for sending your call a few times, it helped.

A couple more weeks and we’ll be into SOTA season officially. Mega-dittos on the Rite-in-the-Rain stuff…ideal for SOTA.

Here I am. I had just finished setting up the vee beam aimed towards PNW, JA and BX.

In the background you can see the three poles supporting the legs. 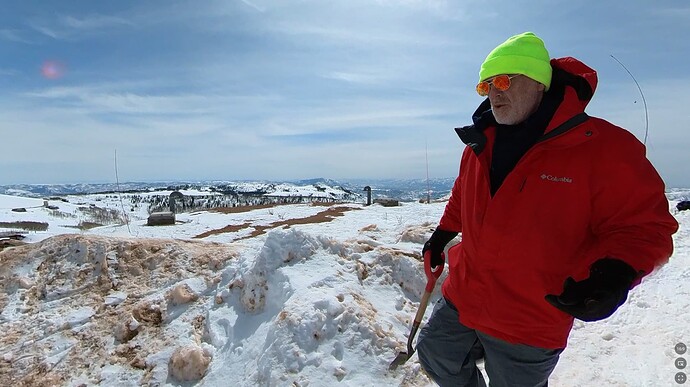 It was a bit later than I would have liked. I think I missed a few PNW stations because of it. Notwithstanding, I managed 26 S2S. 12 of those were JA’s and one BX.

What an awesome day!

Based on the email I received, the PNW Winter S2S was a success. I finally pulled together some numbers…

The event attracted twenty-eight ops from Washington, Idaho, Utah, Montana, Oregon, British Columbia, and California (we have an expansive view of PNW). The weather across the region was, shall we say, variable with rain, sleet, snow, wind, fog, and sun (often all on the same summit) being reported. We had at least four first time SOTA operators, along with the usual collection of PNW regulars.

There were 715 QSOs and 282 S2S contacts made, with DX contacts in Japan, Belgium, Germany, France, Germany and Sweden. Other interesting bits from the log: one op scored 12 Japanese S2S, one had 82 QSOs and 31 S2S contacts, five other ops had more than 50 QSOs, and two topped ninety percent in the S2S/QSO count.

Thanks to all everyone that got on a hill or chased!