Today, we drove 75 miles in sunshine, followed by 5 miles in low cloud to the parking spot on the A470. We walked up through the increasingly wet and windy cloud to the summit, with visibility of around 25 metres. As we returned to the car, the cloud started to lift, and we drove 80 miles home in the sunshine :o)

This trip had been pre arranged, and Mrs 'AZS and I met with our son and daughter in law for the walk up, not primarily a SOTA activation, but neither an opportunity to be missed. In the event I just managed 4 contacts on 2m FM with my HH, crouched down and trying to shelter the microphone from the wind: GW0WRJ/M, who advised me of my unintelligible audio. This was the wind noise problem and without his helpful comment I might not have succeeded. I redoubled my efforts to shelter the HH. GW6OVD (thank you for the spot Mal), Kieth M6KDJ who broke off cooking dinner to call me, thanks! and a nice S2S with Steve G4TCU/P on Callow Hill. In the sunshine. Just down the road from my home QTH

A few more CQ calls, nothing heard so QRT.
I am very pleased with the Wouxun, but it does seem sensitive to wind noise.

I know from experience that crouching down with a HH is not very efficient, so after working the first two stations, followed by several CQ calls going unanswered, I moved about 10m across the plateau to within 1m of the steep drop off. Kieth called me back to tell me that my signal strength had increased greatly, and advised me that whatever I had done, I should keep doing it! This was useful feedback, and confirmed the effect that I had hoped for. If you read this Kieth, thanks, and I hope you didn’t spoil the dinner while helping me out!
The FT817, pole and antennas remained unused in the rucksack, as time was at too much of a premium, and I had not taken any shelter with me. I gather that 6m and 10m have been good today…

On arrival, I tried to self spot, but the txt would not send. In the poor conditions, I just hoped that it would go eventually. It did. About the time I arrived back at the car. Sorry if this wasted anyone’s time listening for me, and thank you for trying.

Great day though, and it doesn’t seem to have put the others off being outdoors - 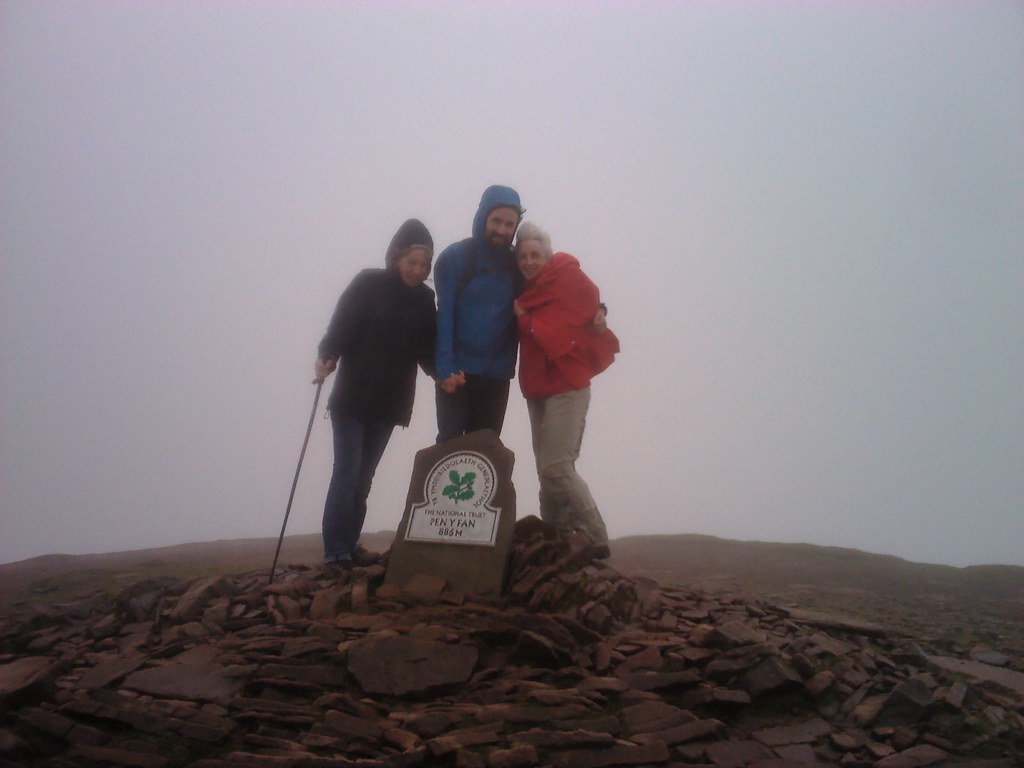 Thanks for the contact yesterday. Listened for you today then Mal told me you were on your handie…no chance.

Thanks for the report.

Shame you didn’t come yesterday it was glorious. So much so I got too sunburnt to go out today as planned!
Otherwise I could have waved to you

Interesting you proved the VHF takeoff gain using the sloping drop from the edge.

Hi Adrian,
Perhaps it’s worth investing a couple of pounds in the external speaker/mic for the Wouxon. Quality isn’t fantastic but it’s easier to protect that from the wind, while having the actual RX/TX unit free to radiate. Just a thought.

stick with head phones me self

Essential Life Skills I Have Developed Thanks To SOTA no. 314:

“Using a cheap handheld in a Force 9 gale yet preserving BBC quality audio”.

Definitely easier with a big fat head like mine.

Can you send CW with a Wouxon?

Can you send CW with a Wouxon?

Yes, I believe the unmodulated carrier is just that…

CW on an FM rig - I supposed it could be possible adding a BFO for rx and tx ??

The LO\synth in a cheap HT will have terrible Phase Noise and would probably drift around badly enough to make receiving CW difficult at 145MHz. The wide bandwidth modulation doesn’t require it to be particularly good. Won’t apply to all HT’s of course.

Alan - yes, sorry about the handie, but thank you for listening! It was good to work you on Aran Fawddwy the day before.

Steve - Sorry I missed you, at least sunburn wasn’t a concern for me!

Ed - a speaker mike might be useful, but there is something nice and simple about a basic handie without any add-ons - if there are contacts in range, of course…

Tom - I think its your beard. Works like those fluffy things they put on Outside Broadcast microphones :o)

Pete - you might be onto something there - a hand held VHF CW transceiver, with built in fingertip keyer.

It would be easy to use MCW on a handy, which would avoid acoustic wind noise, but I think I’ll just take more care in using it as designed!

As a shack experiment rather than a practical proposition you could insert a carrier from another handy on its lowest power!

CW on an FM rig

Probably sounds a little like CW via aurora - or not!

Hmm, I think a sidetone would help rather than just listening to Shussshh on and off keying.

It’ll be great if the “New Radio” concept ever gets implemented by one of the HT manufacturers - being an SDR, it’s all mode.

Suspect the initial price could be a little high though!

By the way on such a HT you wouldn’t need to decode the Morse yourself - it could come to the screen. Now if you could read the screen in bright sunlight is another question…