Silly season seems to have reached new heights, as I’ve just spotted that activators even feel motivated to proudly present close-up portraits of the blood-sucking vermin they’ve caught during their recent SOTA activations

In an attempt to distract at least those with a more sensitive soul from those cruel facts, I immediately felt motivated to write down a report of one of my recent SOTA activations, in the hope that the included pictures would be a little bit more appealing and inspiring

One of my last trips lead me to a rather small but nevertheless very beautiful mountain range in direct neighbourhood of the Austrian valley of Inntal.

When I started my hiking tour early in the morning, the valley of Inntal seemed to still sleep under a hazy blanket: 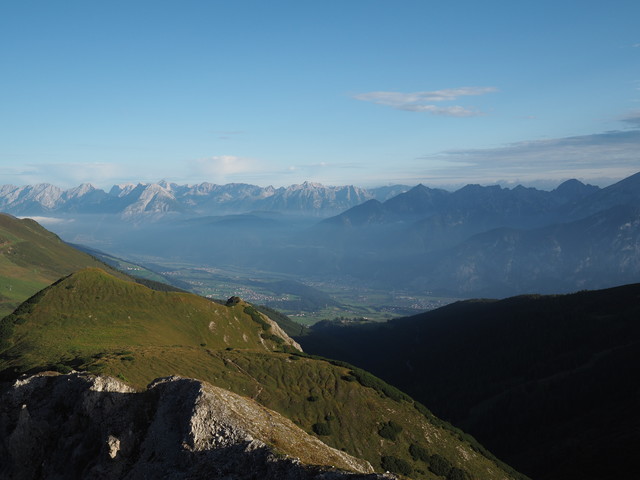 In direct contrast to the smooth appearance of this hazy landscape, a rather cliffy ascent was awaiting me: 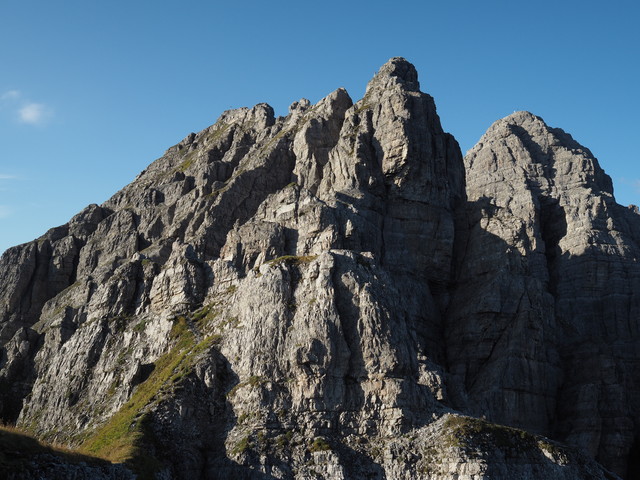 During the rather interesting ascent throughout this jagged area nice views opened up in front of me: 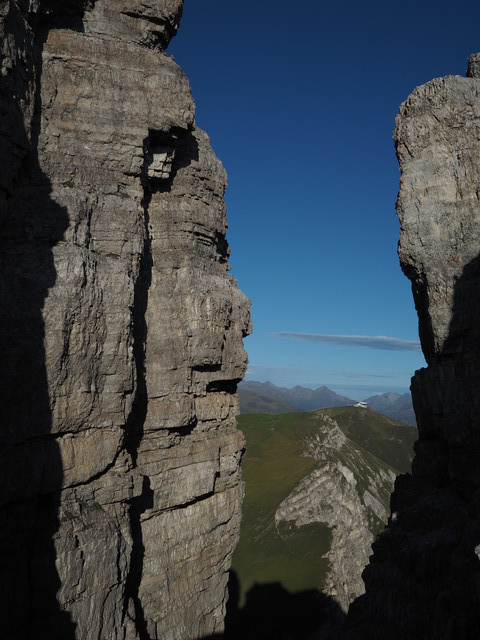 And soon I reached the final section to my first summit, that was unfortunately not a registered SOTA summit: 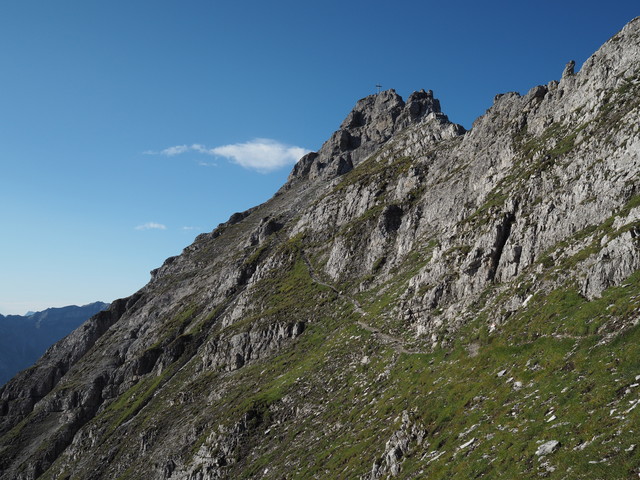 As soon as I reached the top of this first summit, I need to take a deep breath because the upcoming route to the first SOTA summit didn’t look very inviting: 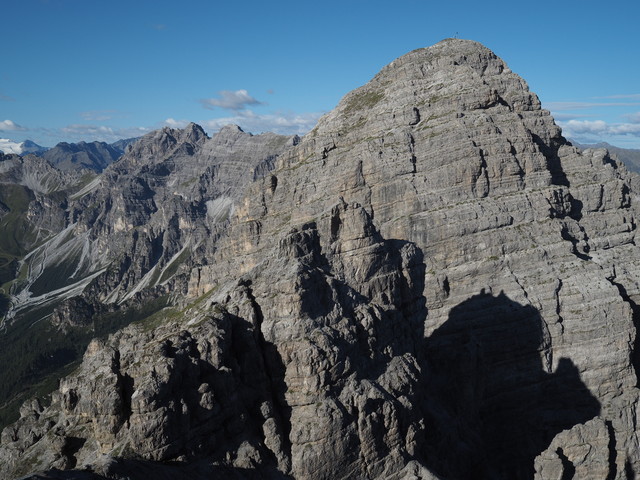 Nevertheless, having climbed up quite some height meters, I didn’t wanted to abandon the hiking tour so early and proceeded along the ridge below the summit. In a little while I found my way along the ridge and stood finally in front of the summit Marchreisenspitze that should be my first SOTA summit of this day: 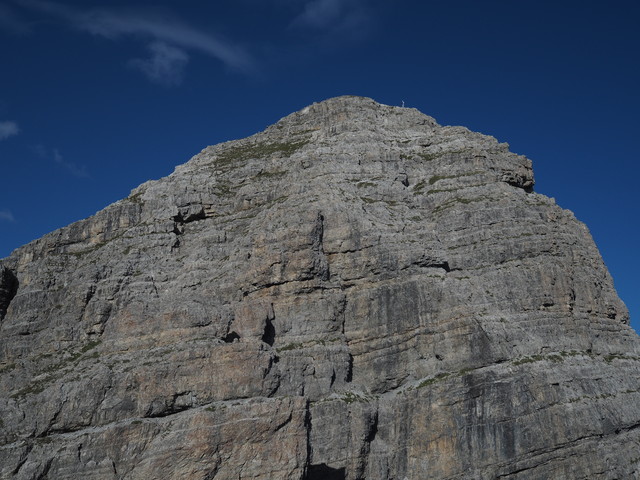 While the summit appeared to be quite tangible, the last ascent looked utterly impossible. But a view downwards revealed a steeply slopping but walkable path around the summit: 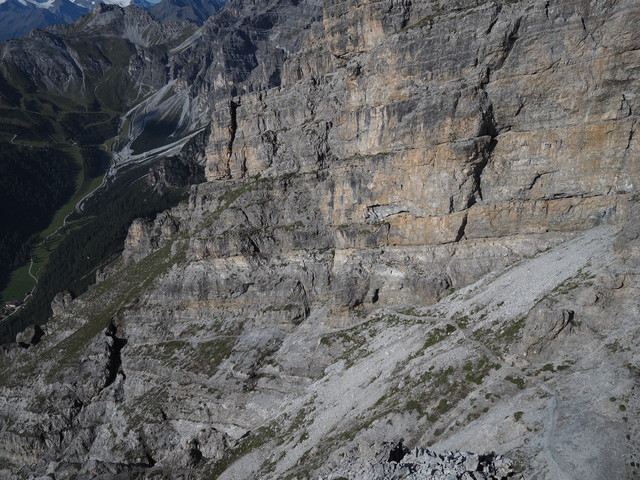 In order to give an impression about the average character of the hiking path have a look at the following photo. There isn’t to much space for stumbling over ones own feet 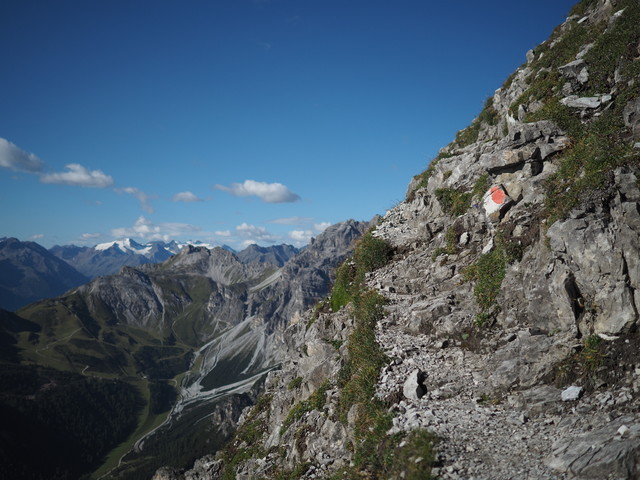 Finally to reach the summit of the Marchreisenpitze one had to scramble up the following narrow chimney: 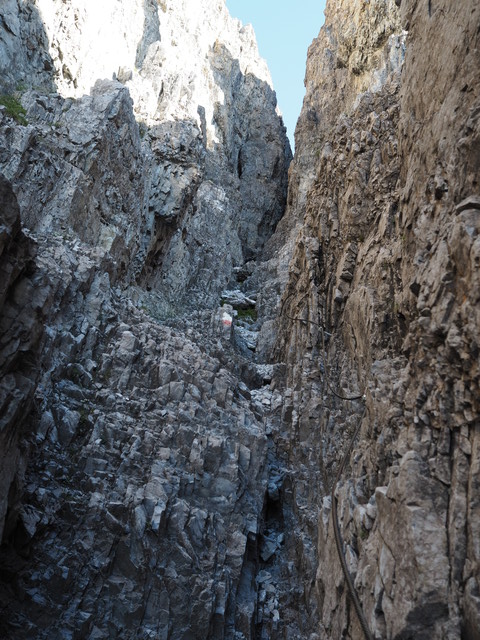 On top of the summit a beautifuly panorama to the surrounding landscape opened up: 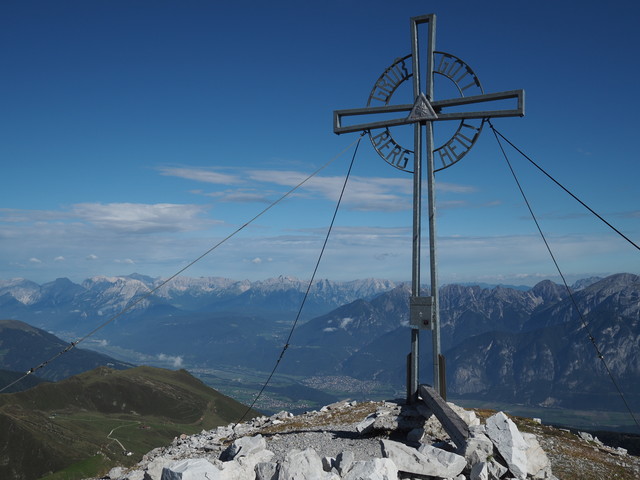 The following SOTA activation of OE/TI-951 brought a total of 24 contacts on the 40m and the 30m band with my little MTR3 radio and about 5watts tx power: 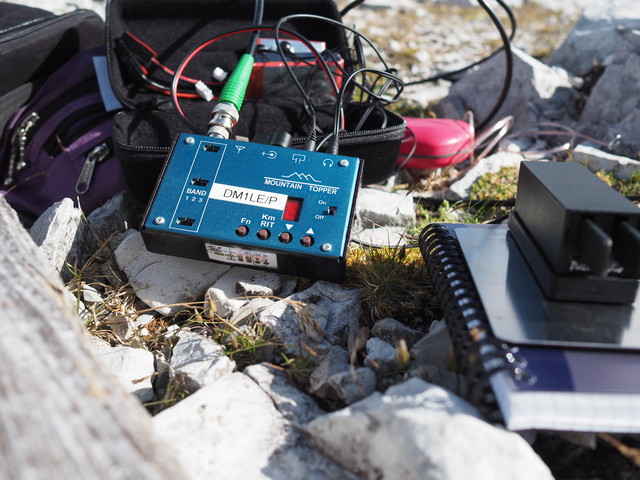 After this first activation of the day, a great view to the upcoming hiking route in this mountain range increased my motivation to proceed to the second summit of the day that can be seen somewhere in the center of the following picture: 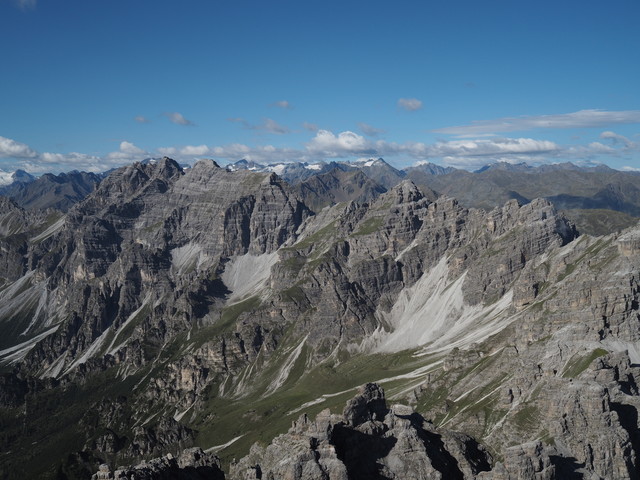 The upcoming hiking sections offered some nice view down to the valley: 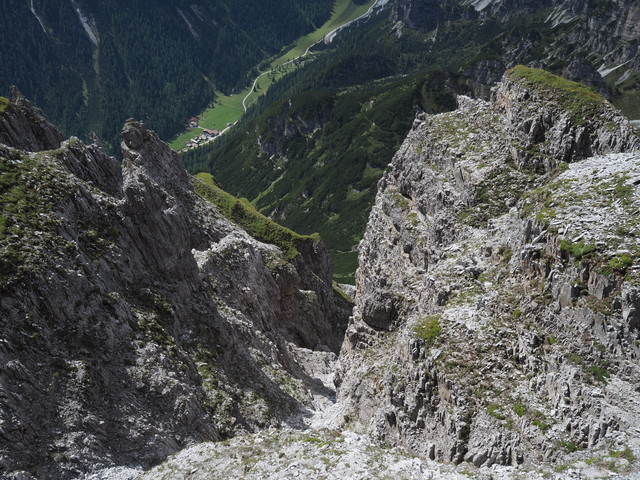 and also to some impressive rocky monuments: 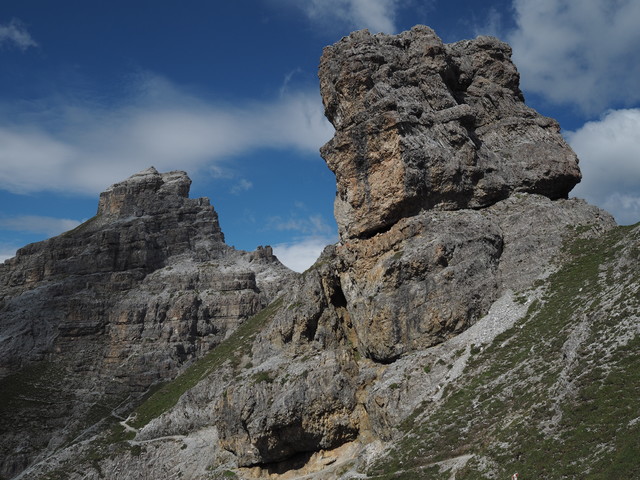 In order to reach my second destination I had to find my way straight through this sharp crack in the center of the next picture: 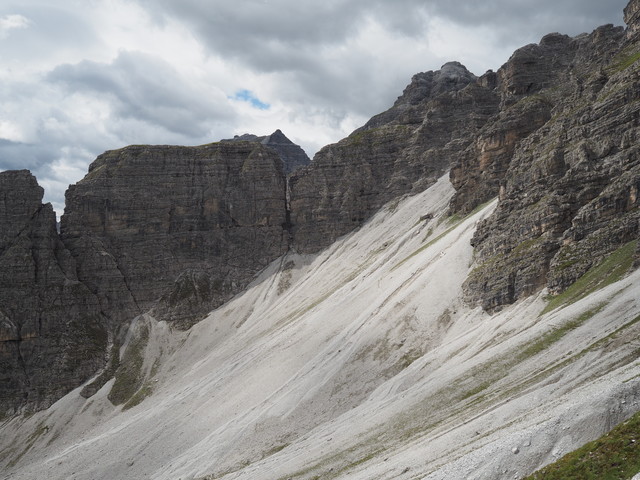 Having reached this crack, a view back revealed my today’s first SOTA destination Marchreisenspitze and the already covered distance: 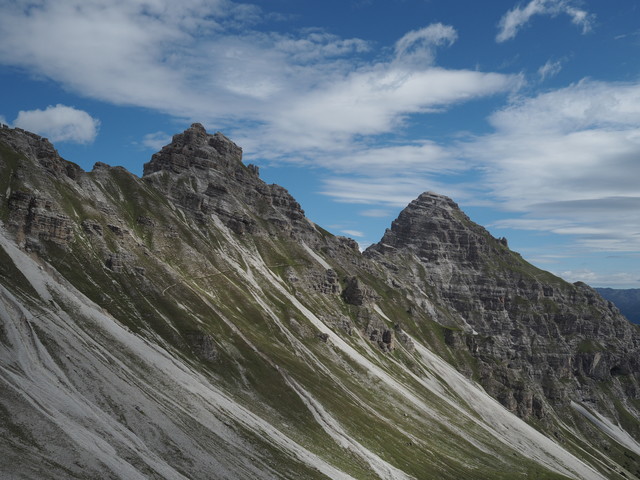 Here follows a second view back to my covered hiking route while standing within this sharp crack: 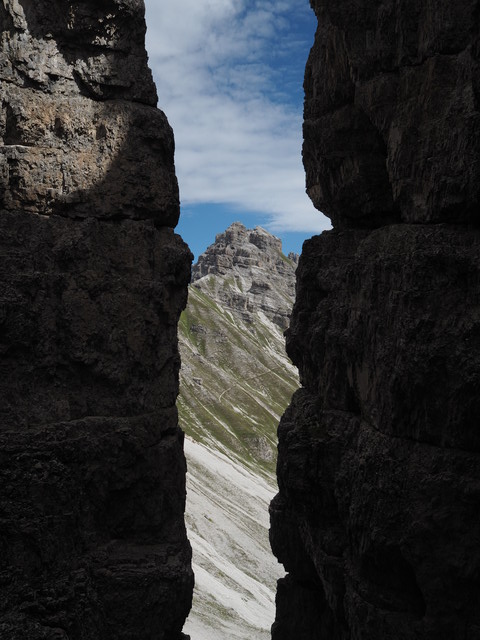 From the other side, this sharp crack did not appear less impressive: 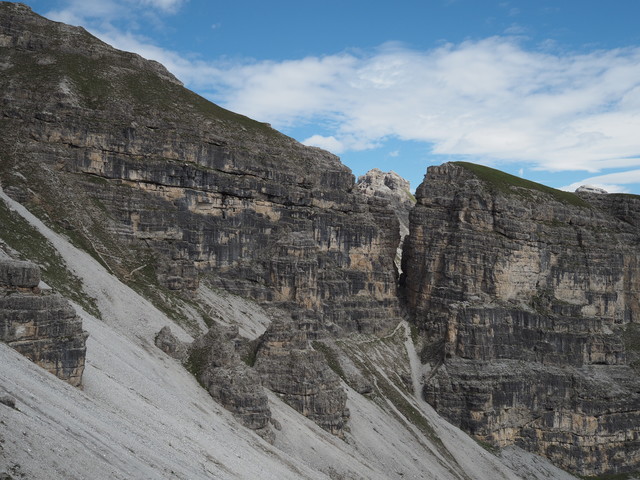 The upcoming path still demanded a huge amount of concentration: 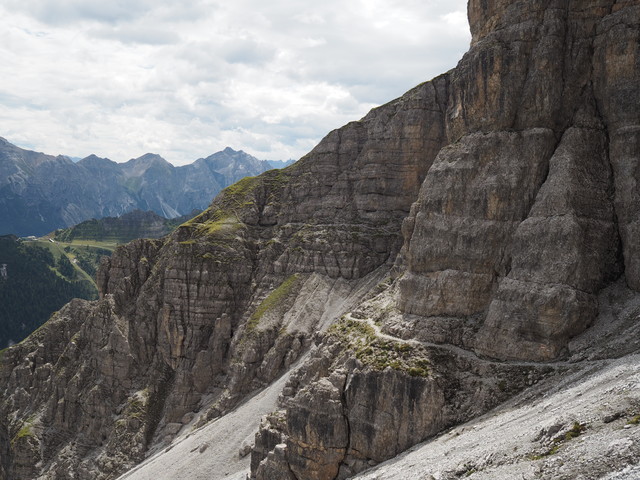 Near the end of this path I finally stood in front of my today’s second SOTA destination. There I had to find my way up to the summit of Steingrubenkogel: 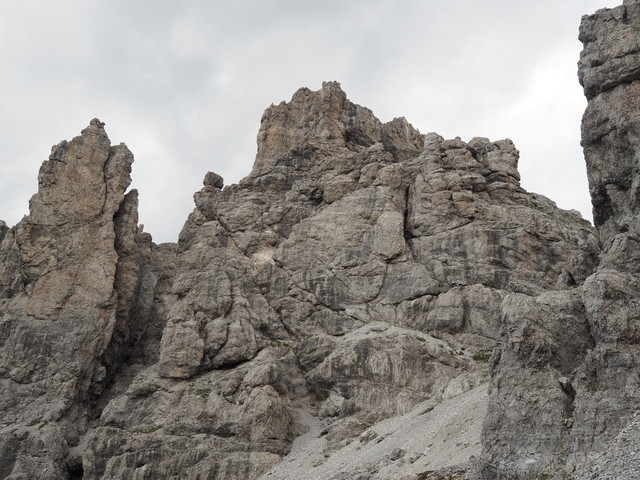 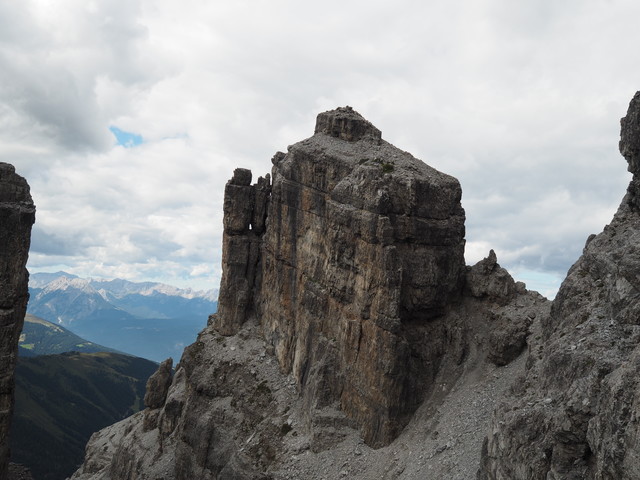 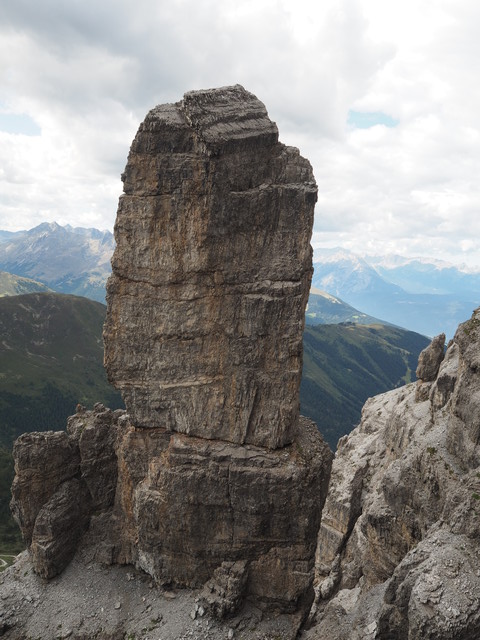 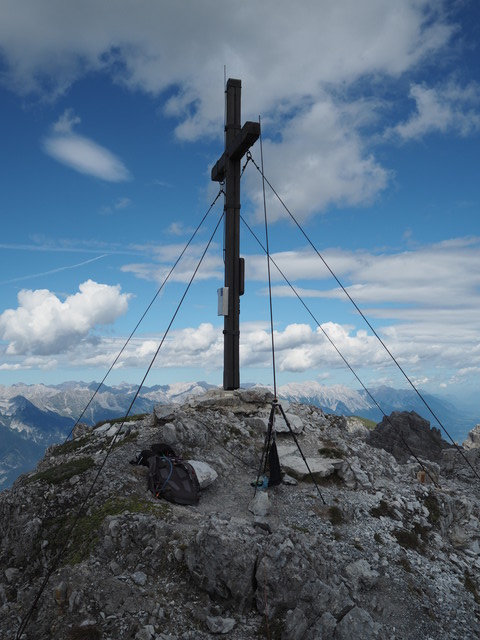 Here another 25 contacts on 30m and 20m band found the way into my log.

During my following descent the sky became more and more dark but the long way back to the car park still revealed some extraordinarily views to the surrounding landscape: 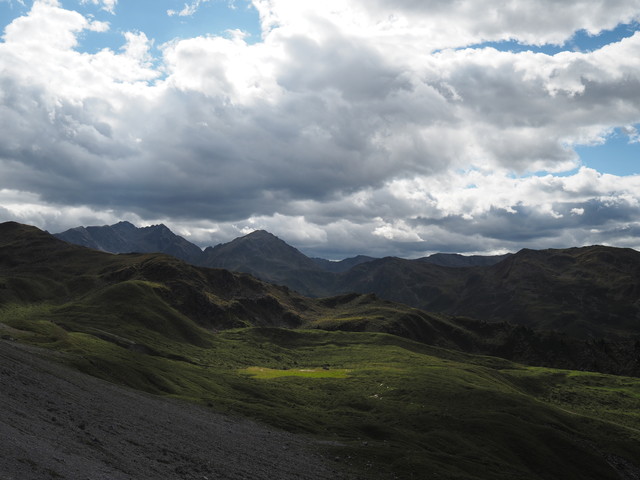 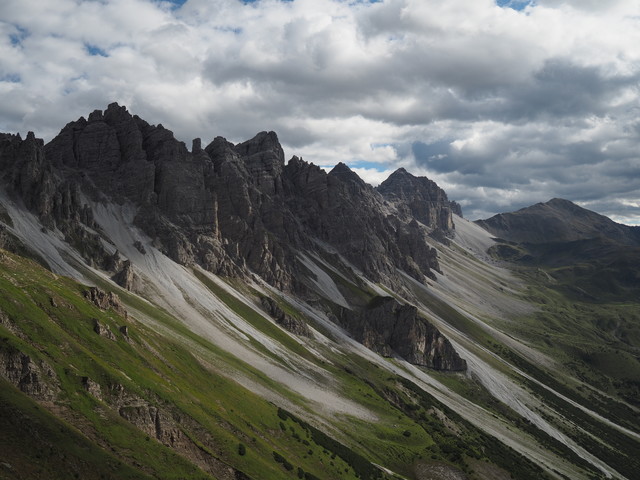 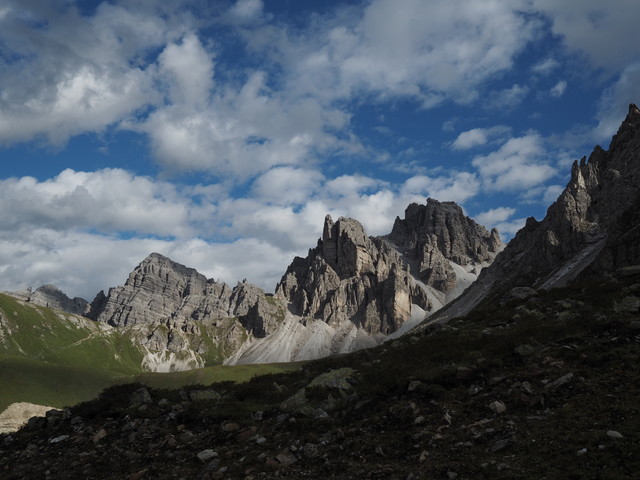 Not far away from the car park, I found an interesting monument containing some rusty wreckage. 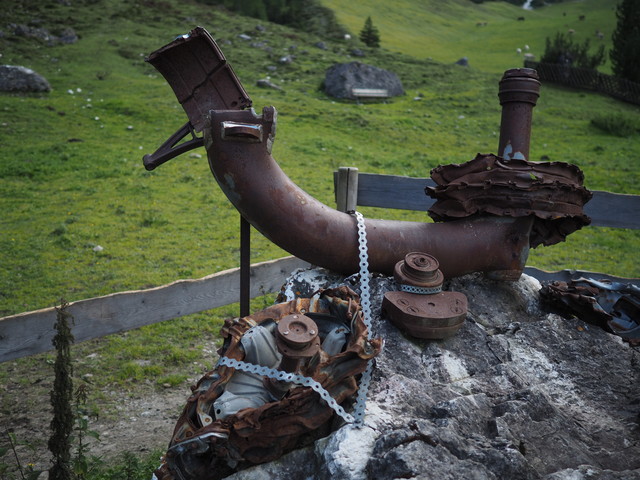 When I approached this monument I found this information board explaining that at the end of WW2 a B-24 bomber crashed at the summit of Marchreisenspitze (OE/TI-951). Fortunately all of the crew members could escape safely before the crash by using their parachutes. 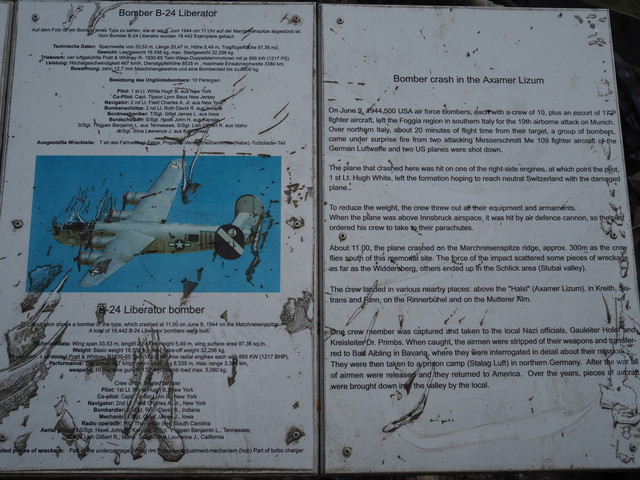 Finally, after a rather long but impressive hiking tour I returned back at the car park in the late afternoon.

I hope you enjoyed the report and I’d like to thank all chasers for the contacts on both SOTA summits.

That was what I would call a really good day’s mountaineering - the activations being the icing on the cake! Stephan, I envy you!

I guess Tom (M1EYP) has his head between his knees by now!
Stunning views

Amazing. Those are some steep slopes you had to ascend and traverse.

You said it would take us away from the insects but I suspect you must have had 6 legs to climb these peaks.

Thanks for your trouble in photographing a testing walk and climb.

I wonder was descending just as difficult? Great photography, thank you for the report.

Wow that scenery is so beautiful. Your report is very inspiring. I must do some walking in Europe sometime.
How far was that walk? Total metres ascended? It looked a big day.
Well done. Keep the reports coming.
73
Anthony

Me too! WIsh I could join Stephan for such great trails!!
Thanks a lot for sharing such lovely inspiring and amazing pictures
My respect and all the best in your activations, hoping you enjoy with them many years!
73 de Ignacio

Really amazing scenery! I can only dream of climbing something that big, but man that looks some scary stuff!

I guess Tom (M1EYP) has his head between his knees by now!

Precisely my thoughts Barry! I am sure that many of us would aspire to such outings, but in reality have never had the ability to execute them. The nearest I have managed are the Cuillin range on Skye, but to me they look tame in comparison to this.

Well done Stephan on an excellent outing and many thanks for the photographs.

The nearest I have managed are the Cuillin range on Skye, but to me they look tame in comparison to this.

I disagree, there are some very thought-provoking summits on the Cuillin ridge - and I don’t know of any chimney/gullies on Skye with handrails!

I was thinking more of exposure Brian and mindful of the fact that Stephan tackled this outing on his own. When I was in the Cuillins, I was part of a group and so was supported by the others. One of the guys did take an unscheduled scree run at one point which was rather worrying!

I was thinking more of exposure Brian

I don’t want to distract from Stephan’s marvellous expedition by invidious comparisons between mountains, but there is a relevant point here. It was in my rock climbing days that I learned to disregard exposure. After all, you are unlikely to survive a 30 metre fall, a 300 metre fall gives the same result, it just takes longer! You watch what your hands and feet are doing, you plan the next move, you ignore the void beneath, and you make it a point of honour to not fall. That way you enjoy your situation with a clear mind. Gawd, I miss those days, but tempus frangit!

Yes, well my comment was made with reference to the well-known exposurephobe referred to in Barry’s post.

My SOTA jaunts are all quite tame when I compare them to the described adventures! Many thanks for the excellent photos.

I’ve been called some things in my time, but this…

I am sure you are sorely offended Tom. However, I do recall comments made about the ascent of Whitbarrow…