I’m writing this as just another activator and the fact I’m on the MT should be ignored.

I’ve not been on 40m CW for a while and some antenna probs with the HF antenna forced an early switch to the LF bands. A wonderfully cold and crisp day with a bright blue sky and fresh snow on the ground so I didn’t really mind I’d be on the lower bands only. Nothing could spoil such a splendid start to the Winter Bonus.

But I wasn’t expecting the antics DL3HXX and OM1AX. I was tempted to go QRT at one point. Just stop in mid QSO and pack up and leave.

I don’t know about you but I always thought the prosign “kn” meant ONLY THE ADDRESSED STATION SHOULD RESPOND. So if I send “DL1? kn” I’d expect one or more stations with a callsign starting DL1 to call me.

Is this what happened? No

No matter what I asked for I got DL3HXX sending his call. OK perhaps he didn’t hear the 1 in the call. But “G4? kn” gets DL3HXX in return. “HB9? kn” gets, yes you guessed it DL3HXX. At one point he seemed to be thanking me for the report and sent a report back. That is bang out of order.

Only sending “DL3HXX NIL NOT IN LOG QRX QRX GO AWAY” stopped him calling in reply to whatever I sent. I worked him much later when he was behaving.

Here is some important news for both of you: you have both had your last QSO with me till 2014. Blacklisted to 1-Jan-2014. No more QSOs with me till then. Sorry but you brought this on yourselves by you repeated poor operating standards. Time after time I have had to suffer this on activations. At one time I’d work them quickly to get rid of the deliberate QRM. But that rewards the poor operating. No more from today. I should have written this months back but I thought I’d check it was deliberate and not accidental. There is no way this was not deliberate by both involved.

I am so livid about this I’m sitting here in smelly walking clothes so I can write this straight away. I’m off to get cleaned up and changed now. And I already feel much better for having got it off my chest.

In reply to MM0FMF:
hallo Andy . i am om1ax . I calling you only two once. ur first qrx for my .I.am stop calling. my werry sorry Andy calling pirat on om1ax . I am no. 73 and good sota de Vlad om1ax

I heard a chaser supposedly in contact with me today, sending me a report and wishing me 73. I sent his callsign back and ‘NIL’, as I was working someone else at the time.

I have checked this chaser’s log on the SOTA Database, and as suspected, the “QSO” with me has been logged and claimed. I have emailed the station privately to advise that no QSO actually took place.

Perhaps as well as all the AR bands to select from in the Database, we should add “ESP” and “Imaginary”…

I heard your weak signal today on 30 m and I was prepared to call you if nobody else was there. Then I heard the replies from the two call signs mentioned and I started to wonder on what frequency you were listening. In your CQ I expected to hear CQ SOTA DE MM0FMF/P UP K to indicated that you are listening up from the tx frequency. Anyway I was little confused. I hope that you are not overreacting due to some minor misunderstanding.

In reply to MM0FMF:
Hi Andy. Well done today.
I tried to work you early on and had a few problems with mainly QRM. I tried to wait for a quite spell but may have walked on someone very weak as it was very difficult particularly when there are 2 or 3 similar callsigns. I returned to what I thought was my call but was walked on after TU so didn’t know what had happened. Heaven knows how difficult it was for you so well done for coping. I did get a comfirmation eventually so thanks for that as I wasn’t sure before.
It was cold here in Cornwall when I did venture outside, I’m certain the highlands must have been freezing and you were making QSO’s for at least an hour non stop on 40mts! Amazing so well done.
I did hear the stations calling over the top when you were in QSO which, I know, is so annoying for you and I did here the ‘NIL’ you gave. I think one of the stations in question is very inexperienced and although does sometimes not listen I’m sure is fast learning the error of his ways so perhaps don’t be to hard on him. The other is extremely bad mannered as was noticed many times today. So well done possibly the first to ‘Name and Shame’.
You may have calmed down by now and hope you’re able to relax. Something I find difficult as a CW rookie when there’s a huge pile up often with a few similar callsigns calling the activator it’s difficult to know who’s being called back. Even a bigger nightmare for you activators when we all reply I suppose.
Well done and again thanks for the summit.
73 Damian M0BKV

You are not overreacting. SSB operators have the same problem and I must admit to having taken the easy way out and worked the culprits to get rid of them. They might not get such an easy ride next time. Don’t let them spoil your SOTA though as the majority of the chasers are excellent operators, patient and polite.

Well done Andy! I was actually sitting on that frequency when you arrived, and heard the complete event. As you were 599 here at the start, I did give you a couple of calls myself, but, as the situation rapidly deteriorated, I just sat back and listened. By the time order had been restored, your signal had faded into the noise, so no QSO for me.

I have made a mental note of those two callsigns, so they are now on probation with me also.

In reply to G3VQO and MM0FMF,

Imho - I think it’s not a good method to denounce the people here,
without having spoken (or E-Mail) to them personally.

In reply to MM0FMF:
HI Andy - this is Lothar, DL3HXX. I read and reread your post carfully and thought about to answer or not to answer. The thing is as follows. I saw you on the net and found you with a vy weak signal and lots of qrm around. I set qrg a bit lower and called you. Then I read just DL - not the “DL1” - and called again being sure you ment me. That’s why I gave you the report during that first over. Normally I wait with the report till I get mine.
I just can apologize for causing such trouble and do hope it will not effect the ambitions of anybody to climb a summit in future.
73’s to all - Lothar, DL3HXX

In reply to MM0FMF:
Hallo Andy,
OM1AX is sometimes in my log, DL3HXX very often. Both good operators.

I know my signal on my “hamradiomountainhikings”, often “motorcyclehamradiomountainh…”, is not so strong and itÂ´s often not so easy for stations in G or ON and EA to hear me. But till now I always catched the least inkling signals as well. And I give a compliment to al chasers.
arno, 73

++Andy and al database manager, thank u for the perfect SOTA site.

Even worse, when I wait the german station to stop, and send DL? DL? NIL NIL PSE QRX, to complete my contact with M0BKV, and then call NOW DL? DL? four times to complete the callsign in my log, giving all the chances in the world, without any response, then our colleague was clearly not hearing me. I am in his chaser log today. What a strange world…

Of course a very few have strange behaviour. They are so much in a hurry to send bucks to Scotland to get the glass trophy, won “hardly and with lots of attention and efforts”.

Call us, when its your turn ONLY. I promess, nobody will waste its time, you’ll get my reply fast.

Ask DJ5AV if its long to get my report?

what means “BTU” ? IÂ´ve never heard that before…

In reply to HB9CSA:
Back to you

In reply to HB9CSA:
The funny thing is I usually send BK of course… Typed BTU thinking “Back to you” hi…

Thank-you Andrew. DidÂ´nt hear that before. ItÂ´s maybe taken from
SSB, since it is not an official CW-abbrevation. hi

In reply to VA2SG:
When you write DJ5AV. I joined a superb hike with Mike 2weeks ago and I just loaded a photo (my Qsl for this activity) from this hike. sorry, in this pic is only me feeding some birds. 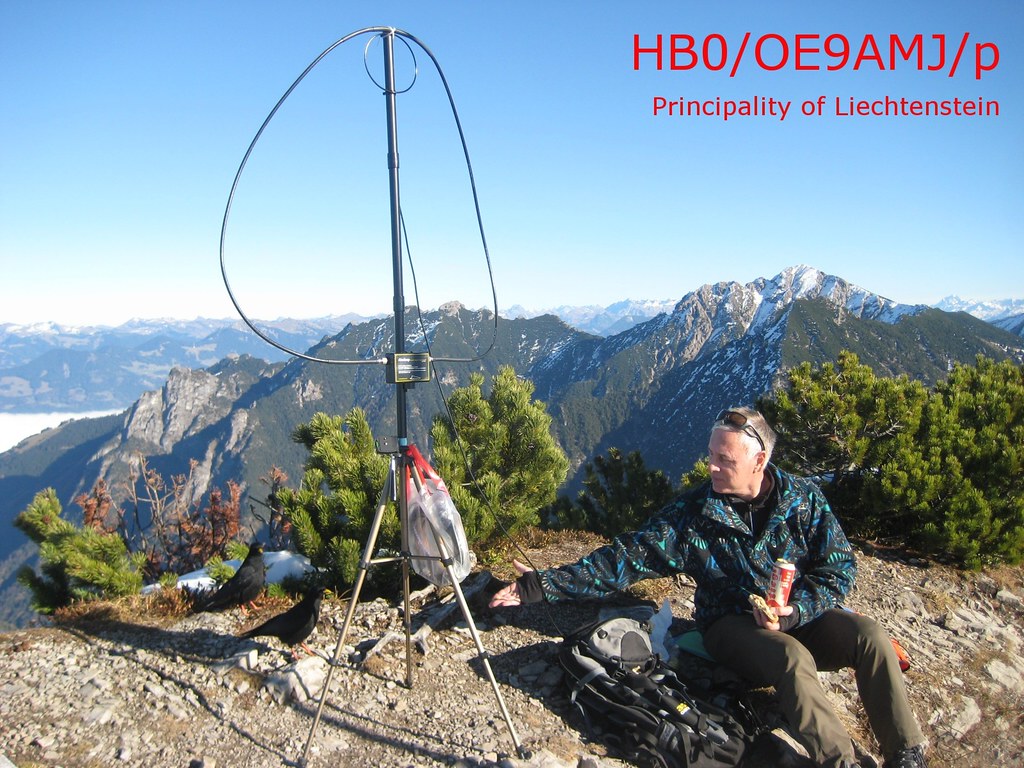 He’s got quite a signal in NA. One of the most frequent chaser, even if condx are not terrible, no matter the season. Congrats.

Yes, Mike DJ5AV is an excellent operator. Always operates with manners and consideration, always gets in the log!