I set off from home at 7.15am in the dark this morning with the intention, after nicking next door’s dog of walking down to Ferry Nab, crossing Lake Windermere via the Ferry then climbing up to Claife Heights (a one point SOTA summit which is also a Wainwright) via Far Sawrey. I set the GPS software running from the other side of the ferry. They have finally seen sense and ditched the ticket machines that caused so many problems last summer - the ferry men/women are also wearing nice new outfits to boot! 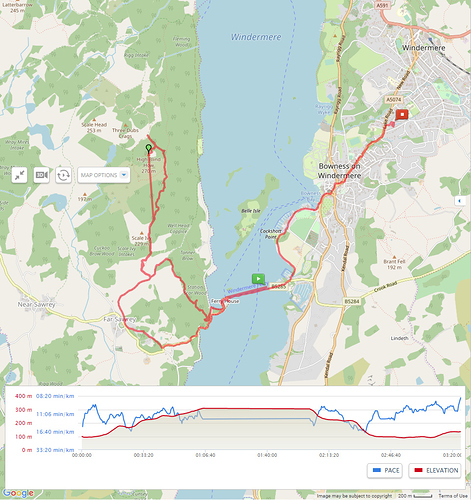 All this went well - wet snow was the order of the day but we still made good progress. I am mostly trying to navigate without a GPS and did manage it for the most part but the summit of Claife Heights is quite difficult to find the final path to and I made the schoolboy error of looking for a path on the right rather than the left. Luckily a forestry track after another 100 metres made me check the map and once I’d made my decision to backtrack I only used the GPS for confirmation due to tight time constraints. 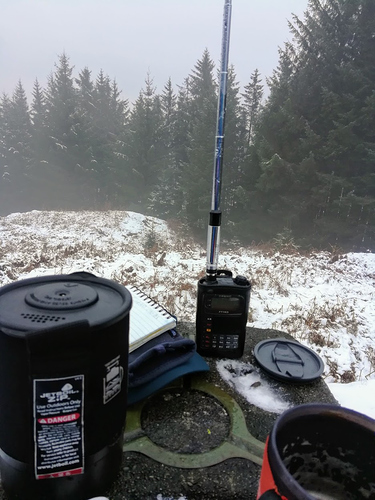 Summit achieved my calls on 2m via the FT1XD and Sharman RH-770 were unheard. Still it was quite early in the morning at 09:03, no matter to HF. The antenna went up well considering the bracken to be negotiated and was almost self supporting - 4.2AH LifePo, MiniPA50 and MCHF all unpacked and wired together except - whoops - forgot the power cable for the transceiver. A little cursing and head-scratching resulted but I couldn’t come up with a risk-free solution so back everything went into the rucksack. I knew I would be struggling for 4 contacts on VHF and indeed, nothing was heard on a final shout before leaving. I did have a very nice cup of coffee courtesy of the JetBoil although there isn’t much of a view at the best of times. Ollie kept an eye out, regardless. I was on a strict timescale as I had to be back by 12 to take my daughter to a hockey match so all this may have been a blessing in disguise! 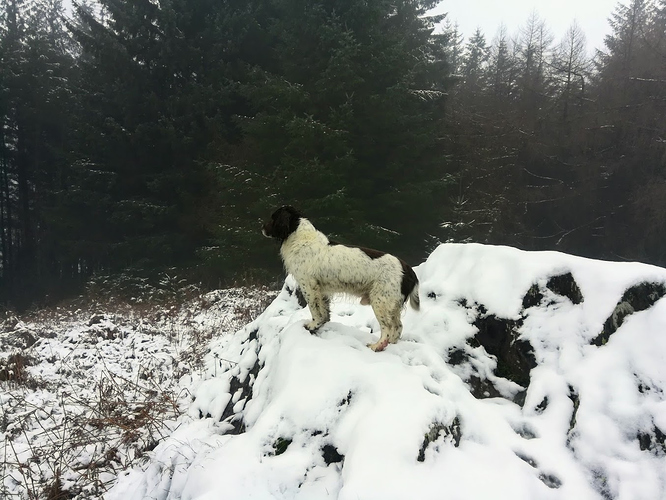 Oh well, it was a lovely walk to the only realistic SOTA summit within walking distance of my QTH and I got some well needed exercise. Not disappointed as it gives me an excuse to return another day. However, I will now attach the power cord to the transceiver so that doesn’t happen again! The photos are by definition a bit grey and murky. 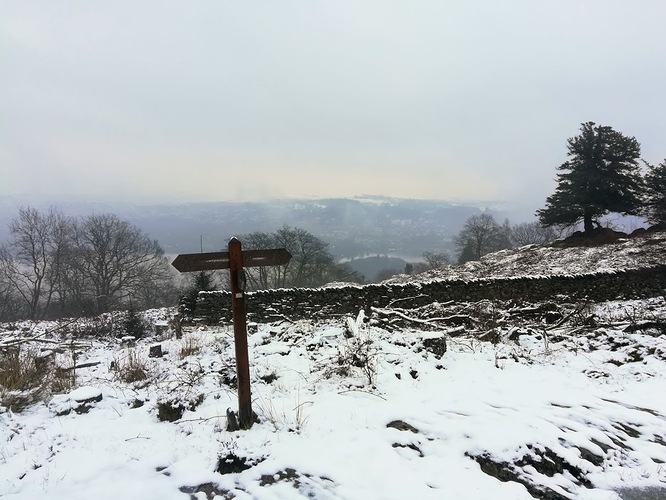 Sorry to hear that 2m didn’t work for you Mark. Oh how times change… I remember it was raining when I activated it and I used a tarp to get some shelter by rigging it up at the trig point. Paul (G4MD) was less fortunate sitting out in it and even more fortunate not to be photographed by me!

Unfortunately I was on parent duties today otherwise I’d have been up in the snow which has fallen overnight as it was a stunning day in the Lakes.

I did however get my longest QSO to date on a 2 hour stint chasing SOTA with the portable equipment - 10,499 miles into Victoria Australia to a base station - Ernie @VK3DET (thanks to Micky @2E0YYY for the encouragement to keep trying and Ed @DD5LP for the suggestion of sharpening the antenna). SOTABeams Quadbander pegged at the 40m clip to sharpen the inverted-V angle with the FT-857 @ 100 watts. What a difference a day can make in the world of Amateur Radio!

Mark, from the summit of Mow Cop, it was such a thrill listening to Ernie working you. On this occasion, I could only hear Ernie’s side of the QSO. I knew you had Ernie’s signal report, however, he asked you to repeat his report. Your persistence paid off and bingo, you were in his log. I must admit to punching the air when the QSO, was completed. Ernie stands for no nonsense, when it comes to signal reports. On many occasions when the 20m band has been garbage, he’s said to me “sorry Mike, no contact.”

Good contact. Hope you’ve calculated as the long path if relevant, might be a few more miles, km or cubits.

Good list of QSO’s Gerald. To be fair I think Claife Height’s really requires a better antenna than an RH770 whip on the handheld - especially when limiting the chaser pool by being early in the morning.

Next time, just for fun, I’ll take the Sandpiper Delta Quad and make sure I’ve got enough time to qualify solely via VHF FM & SSB before I turn to HF.

Yes, must admit to running 25 watts out to a 5 element, but it was only at around 2m off the ground. I reckon the list would easily be halved for an activation at this point in time given the same radio conditions. So many of the regular 2m SSB chasers have moved on to do something else.