I know I have already passed on the fact that Elecraft are relaesing a new rig at Dayton, but through podcasts and some articles on the web, I seem to be “stumbling” over more and more planned releases (or rumours):

So heere’s a list - hopefully those on the list who are attending Dayton, may want to take a look ans let everyone know here whether they are relevant for SOTA operations:

Any one heard of any more for the list?

Any one heard of any more ?

Sorry Ed, the only thing I have heard is that many hams are quite satisfied with their current rigs 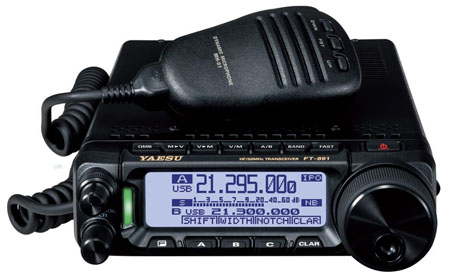 Update: The Yaesu FT-891 is the smallest at lightest 100W HF transceiver ever built, at 155x52x218mm and 1.9Kg. Unfortunately the 2A current draw on standby makes it unsuited for truly portable ope… 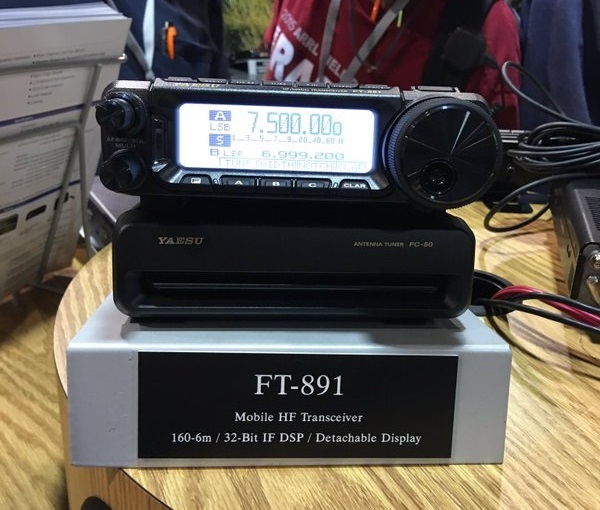 It’s not 100% speculation as I know Yaesu is working on a replacement for some time now, probably being announced after the most recent production run begins to run out of stock. The main issue is with suppliers not manufacturing certain components anymore.

Hopefully the ft791 will be out once ive saved my pocket money up, otherwise I don’t think the elecraft kx2 will have much competition from me.
I was saving for an ft817 but these new rigs are looking good, as long as they stay around the £500-700 mark.

Although I was looking forward to trying 2m ssb on the ft817. I think that’s the reason more people don’t use 2m ssb, I’ve never had a rig that is capable.

@M0VED
2 m and 70 cm SSB can be great fun from a hilltop during a contest. It’s really a pity manufacturers fail to address these bands with their recent developments.
Covering 2m & 70 cm allmode beside HF makes the FT-817 and FT-857 such interesting rigs.

The trend towards dropping 2m and 70cm in new all-mode radios is disappointing but probably not that surprising. I’m guessing the problem is that the added-value for most end users is not sufficient to justify the added-cost for most manufacturers. Simple economics really.

I read comments from one amateur who suggested that if you want 2m just buy a handy. On the one hand that sort of misses the point but on the other hand he may have hit the nail on the head. I suspect that relatively few FT-817s get used on VHF more than once or twice and of those that do, even fewer get used on any mode except FM.

Can’t think of any feature of my beloved FT-817 I would be happy to lose in any successor.

I can think of several extras I would like, but not if it meant the unit became any larger.[quote=“G3CWI, post:9, topic:13204”]
I suspect that relatively few FT-817s get used on VHF more than once or twice and of those that do, even fewer get used on any mode except FM.
[/quote]

Well mine gets lots of use on 2m and 70cm SSB, but I guess that’s unusual. Could it be that opening up HF to Class Bs and M3s was responsible for some of this? ISTR back in 2002 there was quite a number of us using FT-817s for 2m FM SOTA.

Anyway, in just over a week, MI0HGY/P will be doing just that, so it’s not quite the end of the era just yet.

Well mine gets lots of use on 2m and 70cm SSB, but I guess that’s unusual

I think the fact that a lot of the 817s own by people involved in SOTA actually get used portable is unusual. The vast majority of 817s never see the outside of a shack.

I use mine occasionally for SOTA on SSB on 2 & 70. But the initial reason that I purchased both of my FT-817s (one the original, then an ND) was because of the 144/430 MHz multimode capability: they made (& still do) greater transverter drivers for higher bands: 23 cm up. I have transverters working for 23 cm up to 3 cm narrowband, some with 2 m IF, some with 70 cm IF. Having 2 x FT-817 made it simpler - one running 2 m IF, the other for the 70 cm IF units! Made lots of microwave contacts with those units. They have also made lots of longer distance SSB contacts from SOTA summits on the higher bands… Including a recent 3.4 GHz Activator contact of 208 km under flat conditions, with the 817 as IF!

Perhaps that’s true. I do know that 817s are often used to provide a portable IF for the microwave bands, too. Often these IFs need to be 2m or sometimes 70cm. Most 10GHz transverters use a 144 MHz IF. So there’s that.

The bottom line is that Yaesu would really be surrendering a good chunk of the market by not making a good 160M-70cm radio–although looking at Yaesu’s propaganda, I think their niche is really the average ham that wants a decent value in terms of features for the money they spend. Affordability for the average ham seems to be a driver of their philosophy. They don’t really seem to want to focus on portable operation or some of the niche modes and frequencies. Hell–even their VHF/UHF all-mode radios don’t do satellite work very well. Their transceiver specs, while they are generally solid, are nothing to write home about.

I wouldn’t be too surprised if Yaesu lets the DC-to-Daylight portable radio niche just die on the vine.

I think the fact that a lot of the 817s own by people involved in SOTA actually get used portable is unusual. The vast majority of 817s never see the outside of a shack.

More a substantial minority are actually used portable, I guess. But its perhaps surprising how many people on other sites talk of using the 817 as a “sniffer” to locate sources of interference, or as pieces of test gear! Others try and use it as a holiday rig with silly little whip antennas on HF and blame the failure on the low power. The failures parrot “life’s too short for QRP” as if it is a universal truth rather than the mark of their own inadequacy!

Could it be that opening up HF to Class Bs and M3s was responsible for some of this? ISTR back in 2002 there was quite a number of us using FT-817s for 2m FM SOTA.

Yes, that is probably true, but you have to look further back. In my SWL days of the late 50’s and early 60’s 2 metres was very much a minority interest and 70 cm operators were VERY thin on the ground. By today’s standards V/UHF gear was primitive, it had a tendency to be deaf as a post and needed frequent attention to keep its performance at optimum. The sudden irruption of G8s on 70 cm in 1964 heralded a change, 70 soon had a higher occupancy than 2, which didn’t reverse until the G8s were allowed on 2 in 1968. Remember this was before repeaters appeared, and even before UHF transistors became easy to get, everything was hollow state yet by the end of the 60’s it was getting difficult to find a free channel - with a shortage of crystals and the use of AM. I think it is true that occupancy breeds occupancy, the numbers of active G8s brought G3/G4s onto the band, and now the end of the B license and the FL and IL licensees having access to HF drains attention away from V/UHF - which was only ever a real success for those with well sited QTHs or later on, access to a repeater.

That last is the important point. Those with less than stellar sites that might only get a wiff of DX once or twice a year no longer had to persevere as the under dog and turned to the more level playing field of HF. I suspect that this will only change if the QRM level from domestic electronics continues to increase, but the heady days of the 90’s and noughties with high levels of V/UHF activity will never return. The lack of multimode V/UHF gear reflects this - if the manufacturers saw a market opportunity they would take it. There isn’t one, so there is little gear, its as simple as that.

Yaesu also has the FT-991 (which has dropped in price considerably since launch) that is better suited to VHF/UHF multimode scenarios. Then there’s also the Icom IC-7100.

Keep in mind that the old FT-857 had a separate power amplifier stage for VHF/UHF, which added to size, weight and price. The FT-891 is the smallest 100W HF radio yet (155x52x218mm) and that is more important than having another shack-in-a-box.

As for the FT-817’s replacement having VHF/UHF multimode capability, other stuff needs to be adressed first: lower power consumption, internal Li-Po battery, lower weight, improved front-panel ergonomics. Once those are out of the way, VHF/UHF might be a nice addition. For QRP it’s much easier to have 160m-70cm coverage anyway since you can use only one wideband RF power stage at those power levels, so the weight/size/price impact of adding VHF/UHF is minimal.

At Quartzfest this year I asked the Yaesu Rep about an FT-817 replacement, or iffen anything in the pipeline coming down. He stated that a prototype had been designed/built, but didn’t meet approval from the guy in charge (whom I took to be a QRP guru - maybe even the head honcho of Yaesu???)

He had the 991 at his campsite that I had a chance to use/abuse. Nice rig. Just not for what I’m looking for though.

So, understanding that this is a Rep speaking, and taking that with a grain of salt, it sounds as though there is something being looked at. He also stated that the little 817 is still selling strong

I’m not surprised to hear that the FT817 continues to sell strongly. The alternatives tend to look over-specified, under-protected and rather expensive.

A few things need improving on the 817.

It would be nice if there were more knobs and the display was bigger. Or if my eyes worked better and fingers were smaller. Yaesu can’t fix my eyes and fingers!

It’s a 16+ year old design so there has been huge advances in the display and control gubbins over the years. Time to update and use the newer components inside.

As for the FT-817’s replacement having VHF/UHF multimode capability, other stuff needs to be adressed first: lower power consumption, internal Li-Po battery, lower weight, improved front-panel ergonomics. Once those are out of the way, VHF/UHF might be a nice addition.

A “nice addition”? It cannot be stated too strongly that if the new rig (as and when it appears) does not have V/UHF, it will NOT be a “replacement” for the 817. As for “improved front panel ergonomics” and Andy’s wish for more knobs and a bigger display, there is a limit as to how many knobs and square centimetres of display can be accommodated on a case the size of a cheap box of chocolates! Lower power consumption would be nice to have, but the one thing that I think would really make a replacement a desirable purchase would be really good IF DSP!

Lower power consumption would be nice to have,

It’s essential for a portable radio.