Well after a long time of fantasizing about SOTA I finally pulled my finger out and set a date to go. I told all my friends and everyone in my radio club and I was committed. The only problem was my radio when tested didn’t work properly.
It turns out that since I had built the UBitx transceiver I had never really bothered to use it, I always fell back to the 7300 as the ubitx was only built for portable work and I hadn’t done any. Well that and as a foundation license holder up until recently we weren’t allowed to operate home made equipment.
Anyways I had decided I was going and 3 days before I decided to test the rig on the weekly HF net. Well audio reports were not good, too bassy I was told so I removed my little preamp circuit from the mic and tried again after work on friday with a friend. Now I was told it was too tinny with no power. I set to fixing the issue and by 2100 I was at my wits end. I was almost about to put the 7300 in the pack when I got the issue sorted. By now it was around midnight and I had to be up to leave at 0400. I just stuffed everything in the pack and went to bed. Come 0400 I got up only to find it pouring rain. I quickly chucked a huutchi and my wet weather gear in the pack and drove off. I arrived at the starting point just before 0700 and the rain had miraculously stopped. I threw my pack on and started walking, the pack felt heavy but I thought I was just being a girl because I was tired (it turns out that when I got home and weighed the pack it was 18kg).
I crossed the river which was shallow for a change 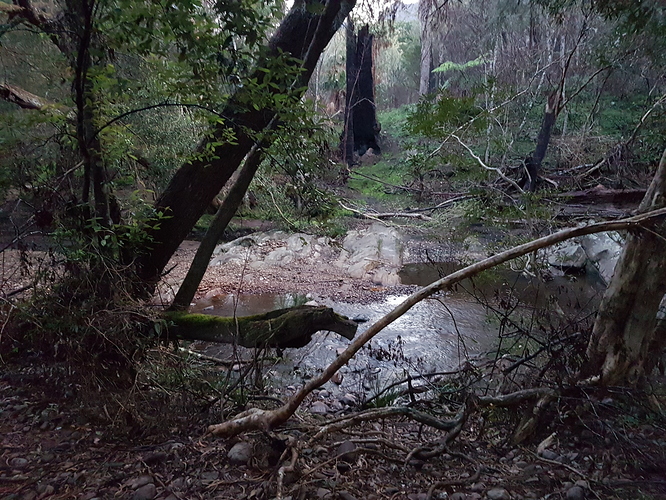 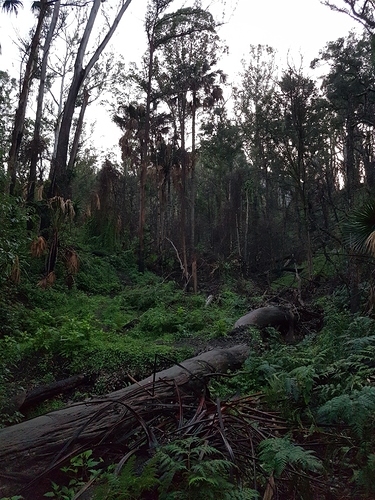 20200704_0705531512×2016 1.68 MB
I pushed hard and fast excited about my first go at SOTA. I had hiked this mountain before albeit with a very light pack so I knew what to expect. The hike is about 8.5km each way with an 850m elevation gain, hard work on a good day let alone after fires had caused trees to fall across the track everywhere. Here I am looking up from about 1/3rd of the way. You cant even see the peak yet. 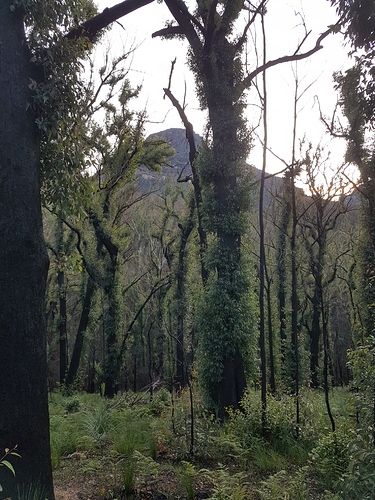 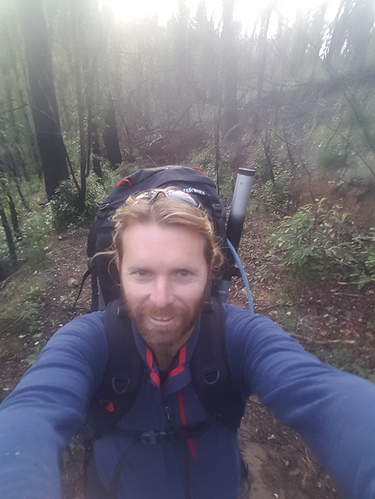 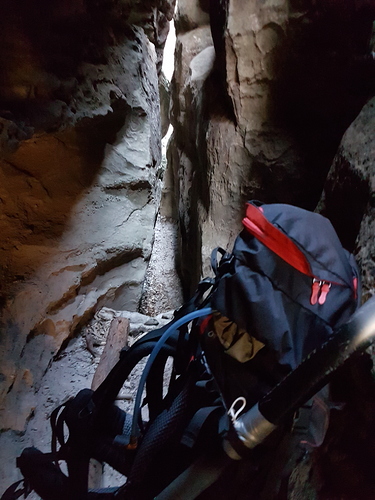 20200704_0939231512×2016 1.06 MB
After some heavy cramps in the legs due to some serious walking and rock climbing I arrived at the top with not another soul in sight. I set up my squid pole and linked dipole and got to calling. It wasn’t 30 seconds and my friend VK2PEZ who was waiting patiently for me answered me. I didn’t even know about sotawatch so he put a spot up for me and from there it was a pileup. Over the next 45 minutes I worked my first ever DX contacts as well as about 24 others around VK. It was my first time and I was hooked. It was freezing at the summit and my fingers wouldn’t work anymore to log so I called it a success and packed up. I met another hiker then and he took some photos of me with the rig before I left. I also got some shots of the surrounding area. The big plateau mountain in the foreground is VK2/SC-046 which I went on to do a first time activation on in a gale a few weeks later but that’s another story. 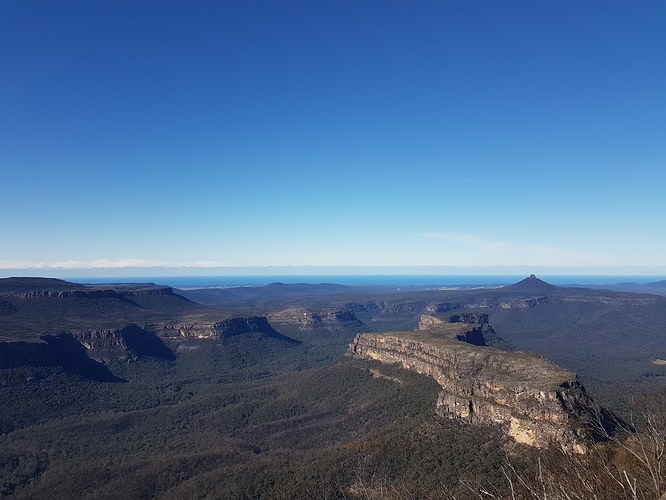 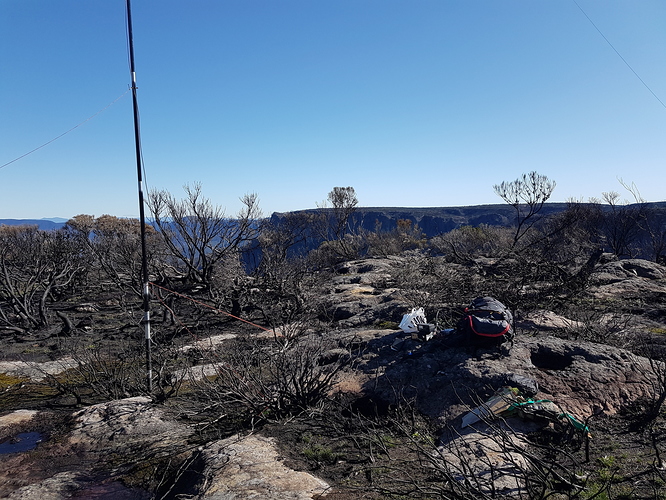 It may help to read through the blogs that many of us write about SOTA. And I have a FAQ document that probably needs to be updated but it has the basics and some useful tips. This reflector has many topics that would be useful to a new SOTA operator. And the ozsota mailing list on groups.io is important as it contains notices about fires, floods etc that seem to happen all too often in VK.
The FAQ is at Http://Vkfaq.ampr.org, look for the SOTA page. Tips for activators, chasers, sotawatch, apps, procedure, notifying potential new summits, etc. the FAQ was originally published in plain text on an FTP server in 1994, it has had several major revisions since then, including being converted to a multi page web site.

Catch you on the next summit.

Hi Paul, great report and photos. Well done. Welcome to the fraternity and have fun.

Welcome Paul. It’s addictive. Don’t let any one tell you that the F call is a limitation. I still don’t carry more than 5w with me. I might be bias but the VK chasers are some of the best in the world. You don’t know it but there was already messages flying around checking on your welfare until some one got the “ive worked him” message. Regardless of our location and callsign prefixes we are one big team. Without chasers we are just idiots wandering in the bush, getting sun burned, ant bitten and dodging snakes!

@VK1DA is being modest. His blogs as well as those of @VK1AD are the very first places I check for summit write ups and tips and tricks.

Congratulations, sounds like you did a good job of it despite the conditions!

Welcome to the party Paul, definitely sounds like the kind of first activation that is the start of the addiction.

It’s a fantastic community we’ve got here in this part of the world chasers and activators alike. Looking forward to working you summit-to-summit some time

A great story, Paul, for a first SOTA activation. What will follow, and can this adventure be topped? So continue and enjoy!

Great story of your first activation’s Paul.
Getting the back pack weight is a challenge and mine seems to have settled on around 8 kg for most hikes I do with everything plus a few spares to get me out of trouble. Some shorter hikes I can get away with a bit less in the kit but that is mostly water and food. Sorry I did not work you I saw you on SW3 and heard some east coast stations calling you but could not hear you here in Clare. I agree with Wade too I use my kx3 at 8w and of course the ft 817 is only a 5w rig. Taking the best possible antenna is the game changer and as predicted the link dipole is the best. IMHO.
Regards
Ian vk5cz …

Where was the DX?

Dx was into the north and south islands of New Zealand .
Was so excited to work them

It was great to work you that day Paul. Congratulations on your 1st activation. Fingers crossed for a s 2 s.
Rick

Congrats de KC1MIJ. The first activation is usually where the learning curve starts. I guess I’m spoiled because I’m the U.S. We have Parks on the Air so I use that to test gear and methods. I never bring anything up I don’t know like the back of my hand.

I only have 5 activation currently and just had the last drive up activation (check out my report for W1/HA-001) so I’m going to use my X5105 instead of my FT-891 since I have summit that are probably your distance or more. 65# won’t do.

Good luck and maybe we can do a S2S some day.

Hi Paul, congratulations for your first activation and good luck for the next ones!