Having moved to Somerset at the end of Aug ‘21, I was curious to find out if playing radio could be combined with exploring the county and this is how my interest in SOTA was born. I had worked /P before but not at any significant height. A search of the SOTA website revealed there were twelve summits to activate and G/SC-003 Beacon Batch was selected as at +325m, it was higher than the Mendip transmitting station that dominates the skyline around here at night time with it’s stack of red lights.

After a beautiful drive through The Mendips, finding and parking adjacent to Ellick House was quite easy considering the number of walkers and cyclists that were there milling around on our arrival just after noon. The area proved to be very popular and there is a well beaten path to the summit so, I was confident that there was little chance of us not finding it or getting lost. 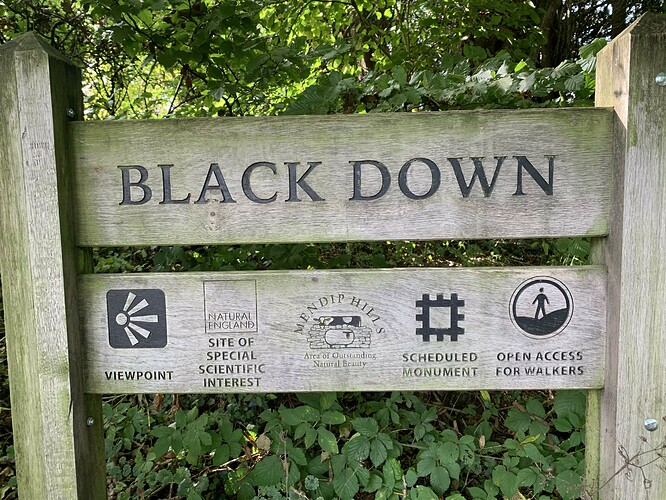 With this being my first SOTA outing, I didn’t know whether I had too much or too little gear with me and once there, the gear was laid out to get myself up and running. On reflection it was too much but my son was with me to carry the picnic which he began to tuck into. 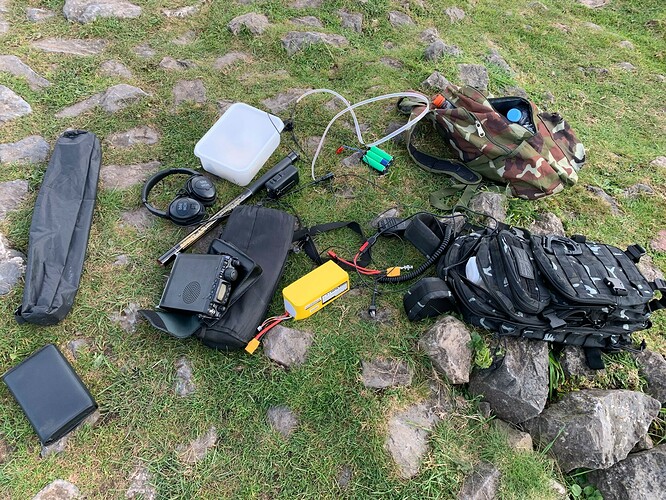 The ground is very rocky and the earth rather shallow so I resorted to holding the 4.1m telescopic pole (with 2m Slim Jim attached) between my legs and hooked it up to the FT-817. Not having worked a SOTA summit before I had three sets of batteries with me and was eager to try them all out: the internal batteries, a homebrew 3s Li-Ion pack and the Zippy 8400aH Li-Fe… knowing that the Zippy would be the only pack to deliver the full 5w output from the 817.

So on internal batteries, calling CQ on 145.500 was quickly replied to by M6AIX who was only about 10miles away Weston-super-Mare. With little effort, another four QSOs were made with the furthest being Birmingham some 95miles away with just 4w as I hadn’t needed to swap any batteries over yet. The other QSOs were to Cardiff, Newport, Stroud & Gloucester so I seemed to be generally working in a NNW to NE direction. 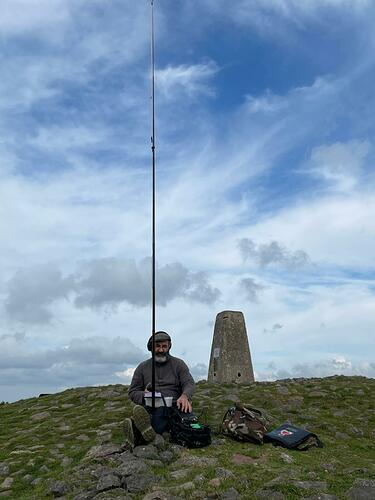 As mentioned before, this summit is very popular and after 40mins I was done and also slightly bemused at the number of people that would allow their loose dogs to ‘bother’ me or who insisted on coming over and asking me whether I was fishing! I’m not quite sure whose levels of intelligence were being displayed here but needless to say, I was happy to pack up and finish off the picnic with my son before he finished the lot.

All in all, this proved to be a very easy summit to activate and a great introduction to SOTA for me but not the tranquil setting that I had imagined. On to the next one…

There’s a long thread on here called something like the "best response to ‘are you fishing’. Quite a lot of amusing replies.

loose dogs to ‘bother’ me

Yes the number of dog owners that think it’s highly amusing when their wretched animal covers your pack and equipment with disgusting slobber while rooting through it for your dinner sandwiches or whatever is truly dismaying. You may perceive I am not a great dog lover

I will need to look out for that thread. I also recall seeing a video on YouTube where an amateur radio operator wore a T-shirt with “No… I’m not fishing” written on it. I didn’t think anything about it at the time but it all makes sense now!

I had headphones on at the time so I couldn’t sense any of the dogs approaching me when I couldn’t see them. I don’t dislike dogs as it’s normally the owners that I dislike. Fyi, we have two dogs at home and the latest addition has even earned an appearance on my QRZ page. I leave the dogs at home when out /P but now bring along my selection of deterrents.

be the only pack to deliver the full 5w

Actually all of them should do that. But you don’t get long on 5W FM from the internal NiCd. I’d be interested to know how long you get out of the 3s 18650 pack.

Best comeback for "Are you fishing?“ Off Topic

I’m not a comedian but would welcome a few suggestions better than ‘never heard that one before!’

Hi Lea, congratulations for your first ever SOTA. Thanks for your great report and photos too.

Question- what did you learn and what would you do different for your next SOTA activation?

Actually all of them should do that.

Well… my FT817 was bought used so I can never tell whether it’s working the way it’s meant to be when it leaves the factory. When I use the internal battery (9.6v 2400mAh), anything over 2w results in the transceiver switching itself off. On the external 3S Li-Ion batt pack (delivering 12.09v) it will only ever push out 5w when on 70cms FM otherwise it delivers only 4.4w max on 10m. Whether this is correct or not I cannot tell as I have no way of doing a direct comparison with a second 817.

When I use the internal battery (9.6v 2400mAh), anything over 2w results in the transceiver switching itself off

Hi Lea, it shouldn’t do that, I’d say the internal battery is past its best such that the voltage is drooping under load causing the radio to switch off…

Not too much of a problem as you have alternatives! I’ve taken the battery out of mine and always use an external LiFePo now.

Question- what did you learn and what would you do different for your next SOTA activation?

Hi Geoff over in VK land!

There is so much to learn about amateur radio but that doesn’t correspond to the enjoyment that I certainly get when sitting on top of a summit. It hasn’t happened yet, but if I ever fail to activate a summiit, I’m certain I would have still enjoyed the attempt. Fyi, I’ve done 4 other activations since my first one and there is a report on the reflector for my last one at Staple Hill [ref: M0XPO activation of G/SC-004 on 15th Nov 2021]. I still have three other reports to post so who knows whether they will even hint at showing that I know what I am doing.
73 de Lea M0XPO

Lea, Adrian is right, the NiCd is knackered and it can’t provide the current for high power. I’m not sure if I would ever recommend anyone to replace it as, TBH, it’s a bit pants. You could always recell it yourself .

4.4W on HF etc. sounds much like mine which is a 2006 vintage unit. I’d say it’s working perfectly. You can tweak the output power but you’ll never notice the extra 0.6W on air.

I would tend to agree. My 817 came with two internal batt packs, one was dead and the other didn’t hold a charge for very long so I took it apart and swapped the batteries with fresh rechargeable AA’s and reconnected the circuitry across cells 4 & 5. It lasts okay on RX but struggles with working above power level Lii

You could always recell it yourself

Yes - I’ve already recelled it as mentioned in my response to Adrian and it will charge to 10.5v. Btw, the serial number starts with a 1H so I think that means 2001 / June ??

Either look for the Windcamp internal LiPo pack (but this needs to be charged external).
Of if you recell the pack use Eneloop Pro cells. They can provide the needed 2 Ampere.

I am using an external 4 cell LiFePO4 pack 2500 mAh and that works great. Never missed the internal pack.
817nd went with me to JA on Mount Fuji and on other adventures. I like it

Yes, just saw that. The voltage is dropping low when you pull a large current and the radio switches off at that point. If all the cells are new, then it will be a dirty connector or a high resistance contact somewhere. I suppose one of the new cells could be faulty. Never experienced a new cell being faulty.

Anyway, you have other power packs so not a big issue.

Hi Joe,
… and thanks for reaching out from Austria. I have made both 3S and 4S external Li-Ion packs and, when fully charged using my Turnigy Accucell 6, the 4S is at just under 16v which the 817 seems to handle well with. Have you had any problems?

(btw, my friends have a house in Austria & they have just had their Xmas flights cancelled due to new lockdown restrictions over there so hope you are staying safe!!)

I am fine thanks. Went solo on a nice activation with perfect wx today.

As most radios “like” the typical 13,3-13,6 V of the LiFePO4 I decided that its is the best option. Also the external amplifiers work fine so no need for funny experiments with other cell chemistries.

I’ve already recelled it as mentioned in my response to Adrian and it will charge to 10.5v

Somewhere in the back of my mind is that the 817 requires a minimum of 11V for full output, but don’t ask me where this came from. I might have read the manual… gasp, horror!

Many thanks for the great report Lea. Beacon Batch is actually my “bete noire” in that I activated the summit at dusk and managed to come off the summit in completely the wrong direction requiring me to contour around the hill with hedges and fences to negotiate. I must go back and see it in daylight, but by the sound of it I need to avail myself of some pepper spray. Dogs are also very capable of running into the antenna… almost a magnetic attraction. I activated a WWFF area on the Northumberland coast a couple of times and had several “hits” on each visit, all without any apology from their owners. I’ve decided that I need an electric fence.

Well well well ! I have just stripped my re-celled internal battery and put all the batts into the 817 plastic caddie et voila !.. 10.6v and it doesn’t die when keyed up on full power (4w) so problem solved. However, I’ve never used the plastic caddie in the past as it wont fit inside the radio due to the thin self adhesive rubber strips located all round the battery compartment - I will need to find out if these standard or did the previous owner put them?

On this topic… oddly enough the FT-817 brochure is more informative than the manual itself! The brochure states:

On that second point, when I override the 2.5w I still only get 4w on the int batt whereas I get the 5w on the ext batt.