Luckily I wasn’t in a hurry. I’d seen several lorries parked up on the hairpin bend just north of Loch Tulla from my activation of Bienn an Dothadh. I’d assumed they were parked up in a new layby. I didn’t notice the almost total lack of traffic. On my way to Glencoe later that day I found out what was going on. The road had been blocked for most of the day by a tanker which had pulled over for a car coming the other way and had rolled on its side after hitting the soft verge.

I could not go anywhere so I made my self dinner. 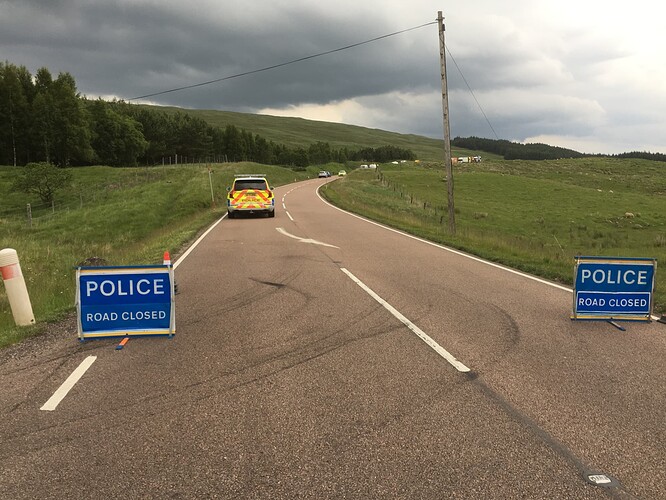 An hour or so later the road was opened and I continued my drive and parked up at the Glencoe White Corries ski area that evening… As expected for a monday it was fairly quiet. The last few bikers were packing up. The weather for the next day was either sunny periods + cloud; extensive Cloud + strong winds; WX Rain in the morning improving from the West later. Take your choice. A nice posh café was a new upmarket feature.

Its just about an hour to the top of GM/WS-017 and I found a reasonable spot - and self spotted on 7mhz at 1153utc. It had a seat, and a desk and a room for my brolly. 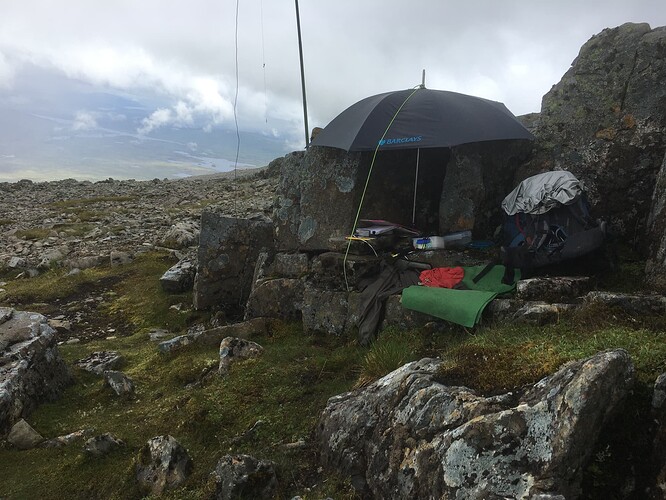 In 30 minutes I had 9 contacts on 7mhz, only one of these a UK caller (Nick/GOOE), another Scarborough ARC member and SOTA operator. Maybe there was something on TV - I expected more. A quick change to 14mhz brought another 6, 3 of which were UK callers. Then the heavens opened up. My shelter was letting in rain!! Lots of it. My radio went under cover, my log book getting wet and I had to stop operating. The rain kept going for a good 30 minutes and I was wet and cold. Time to move on. 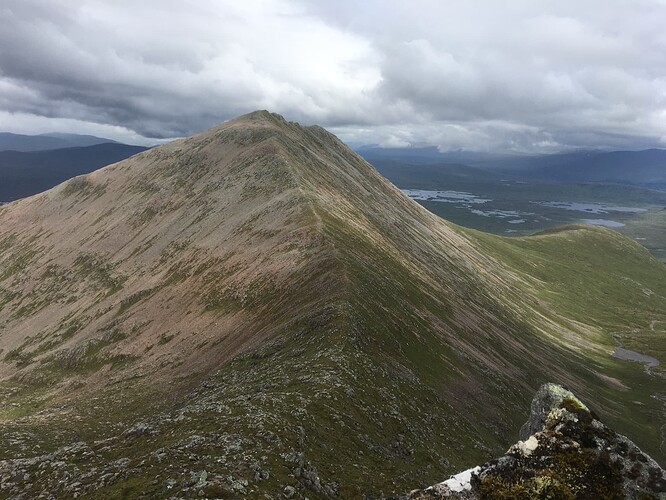 I found a nice spot in the lee of the hill and put a spot on for 14mhz.

I managed a self spot. For some reason I decided to wait before calling. It wasn’t long before someone called me up and I don’t even think I pressed my key!! A first for me! 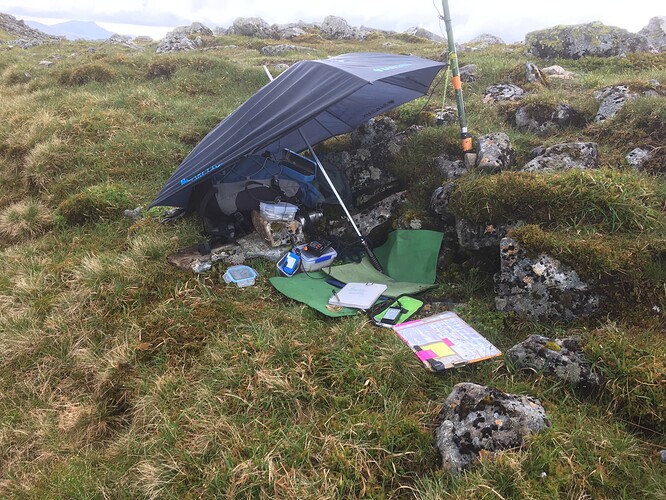 Below is a close up of the short section of pipe I use to hold my pole. I always pre-fix it in either the ground, or as here in suitable rocks. It means no messing about trying to fix the antenna & pole whilst at the same time trying to anchor the antenna system etc. 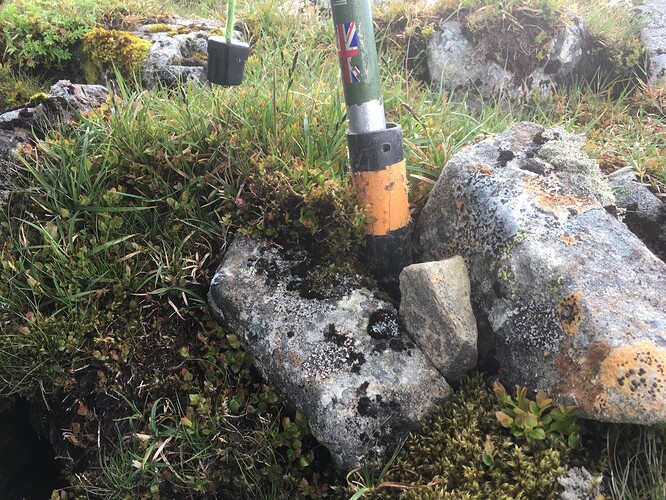 During the activation my radio (an SW-3B) kept cutting out and switching back on - whilst doing so it kept sending two erroneous dashes as everytime the radio came on it sent these to indicate it had detected my straight key. . LARS/SA4BLM was on the receiving end at this point. I don’t know how but he managed to make sense of it but give me an RST & 73. I cursed the radio and thought it had got wet earlier on. It was only when I noticed the battery power dropping on TX to 8v, that I realised the battery voltage was the problem. I was carrying a small spare 1800mAh battery and this solved the problem - luckily for the remainder of the callers. One of which called me up stated he was ‘QRP’ and proceeded to tell me his name, what the weather was doing (32c) and it was very sunny in his QTH. I thanked him and said 73. He came back and wanted to know my name. And rig. and ATU And Antenna. And WX! Rather frustrating really.

What do others do when this happens?

Anyway after 50 minutes of operating I had 22 contacts including two S2Ss, one with Tom/ MQ1EYP/P on GM/SS-275. It was getting late and I returned to the van arriving at 7.45pm just in time for a coffee and a very nice slice of cake at the cafe which was just about to close. 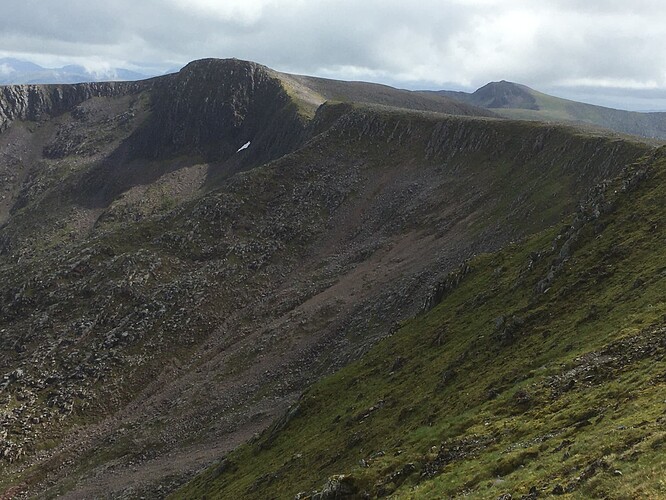 This was my last activation. I did spend another couple of days at Camping & Caravan Club site in Glencoe. The weather was rather iffy and didn’t look like it was going to improve. I eventually gave up and drove home. I’d got enough points for this trip!.

On my way back home past the Blackmount and on the descent to Loch Tulla I noticed this tree. It grows out of a crack in a rock at the side of the road. I’ve passed it many times before. Its an old friend. The first time I saw it was in 1965 on a school trip to Scotland - I have the photograph to prove it !! It was smaller then. 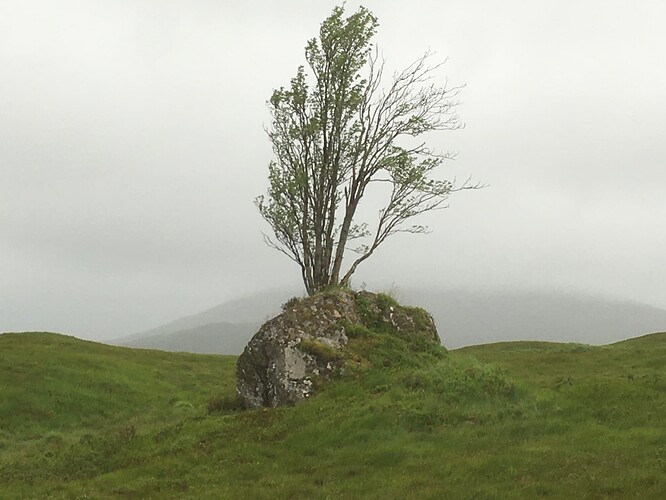 Hello David, thanks for sharing your activation and photos.

If you don’t ask…