I hope you will be making an Irn Bru flavoured rig for any Scottish activations.

My annual RockMite20 activation seemed to come around rather quickly this time! I guess it’s true when people say time speeds up as you get older!

Today’s activation was non-scoring, it was purely for fun. Each year my original RockMite 20, which was the project that started me off on the road to kit building and home brewing in 2007, gets dusted off and put on the air each May 3rd. Ingleborough has been my favourite hill for decades and I feel very lucky to have been living near it’s southern side for the past few years.

Today’s goal was to try for a QSO with my friends on Skye, on one of their Camb-Hams DXpeditions and to manage at least four QSOs on the RockMite.

Unfortunately the phone signal on Ingleborough is rather intermittent but I finally managed to arrange a 40m sked with GS3PYE on Skye via Twitter and we worked with ease. I was using my QCX-40 and amplifier, which was taken along specifically for this QSO!

I managed 14 QSOs on the RockMite, including two S2S, which was an unexpected but welcome addition to my log. The RockMite was putting out about 400mW during dummy load testing last night - I thought I’d better checked it still worked as it hasn’t been fired up since last May! 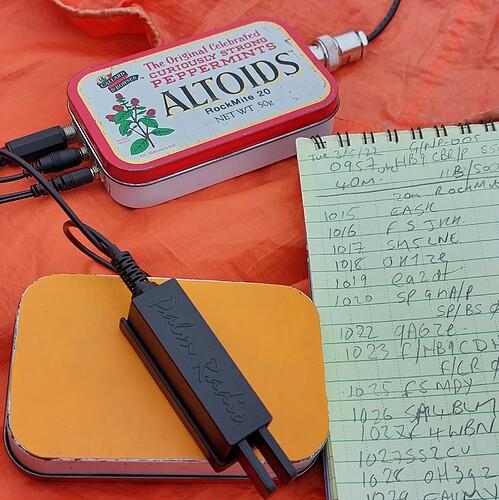 I ran the QCX-mini with amplifier for a little while on 40m, but conditions seemed a bit weird. Still, I managed 18 QSOs, including some S2S.

Finally, I fired up my Slop Bucket 20 for some SSB. Initially I used 14.323MHz but I suffered some dreadful QRM after a few minutes. I thought the QRM was local, but a chaser also mentioned the QRM, so I changed to 14.310MHz and worked a handful of callers. I’m not too confident with the rig yet, I’m still learning how to use it. Judging by the modulation LED, I think the modulation could benefit from turning up a bit. I’m running a home brew microphone with the rig, so again, that’s another unknown. During my time operating with the Slop Bucket the rain got heavier and the rig got a bit of a soaking! 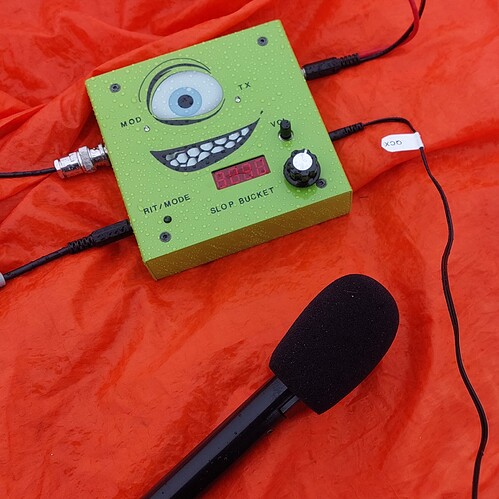 I considered my activation a success, although I had secretly hoped for a QSO with the Svalbard expedition. (I messed up with my QCX-mini 30 by leaving the 40m LPF on the amp! No wonder the signals on 30m sounded weak!)

I just had enough time to divert to Kirkby Lonsdale for an artisan Coffee and Sea Salt Caramel ice cream- well, birthdays only come around once per year! 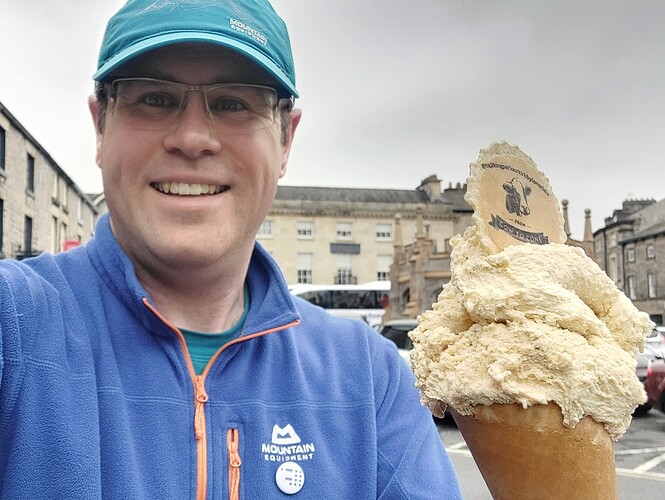 Thanks to all chasers for the 39 QSOs managed today across the three rigs I used.

Sorry I missed you. I was on 20m SSB at about the same time but didn’t see your spot. A S2S might have been possible.

I did listen for you but didn’t hear anything.

I summited Ben Nevis, GM/WS-001, last month, but for some reason I took a real nose dive in mood afterwards. I have felt low since my return from Scotland. I didn’t want to do anything or go out for a walk. I started a RockMite build last week and it was great to get in the shack and get building stuff again. The RockMite project had to be put on pause whilst we had a family trip to spend the weekend with my wife’s father in Devon. We had a great weekend and were lucky to catch the English Riviera Airshow on Saturday in Paignton. The weather on the following day was even more grey than it was on Saturday, causing all of the display aircraft to cancel. 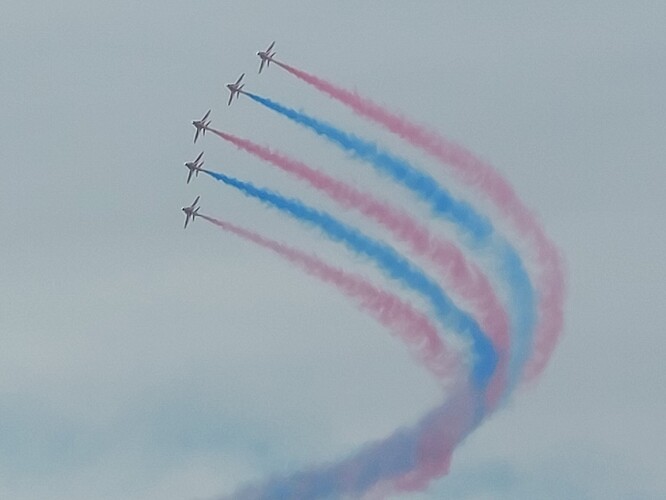 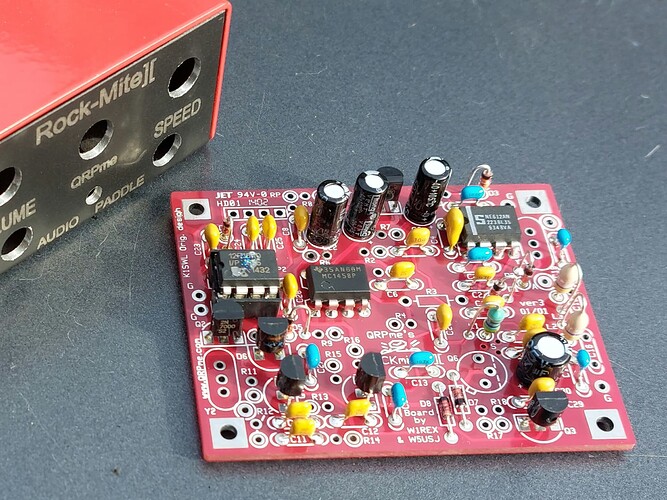 I’m definitely on the mend now and the weather forecast today looked very favourable for my first activation since I did Ben Nevis last month.

I usually ascend Pen-y-ghent from the parking honesty box, travelling via Stainforth. I reached Stainforth today to discover that the road was closed due to resurfacing work happening. I decided to divert to Horton in Ribblesdale and ascend Pen-y-ghent from there instead. I was lucky to find a parking place on the road, quite near to the Pennine way. As far as I can recall, I’ve only done Pen-y-ghent once from Horton and it was many, many years ago.

I was asked by a mature couple what my pole was for, and I replied by saying that I used it for a radio aerial. The conversation grew, it turned out that the man had built a TRF valved set as a lad and used to listen to shortwave on it! We spoke about my radios and Morse code etc - I was told that it was great that somebody so young was taking taking an interest in radio and Morse!

I enjoyed the different route up the hill, it was nice to experience the other side.

I started on 30m, but I’m not sure if was conditions or the radio, but I managed only 3 QSOs. The band seemed pretty flat to me, with QSB also. 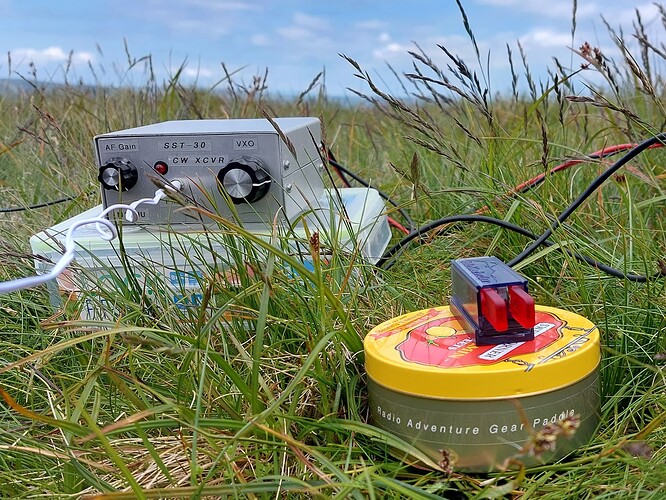 I then switched to my QCX-mini 17m. I recently re-worked this radio after being disappointed by the receiver performance. I decided to try using a yellow core for the RX BPF / phase splitter. I hadn’t tried the QCX since it’s surgery- I had been waiting for a suitable day to test it. 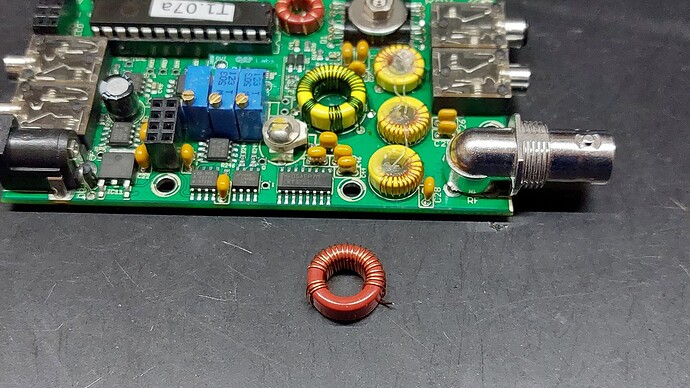 Well, what can I say? The improvement in the receiver is off the scale! Finally I can hear and work stuff! 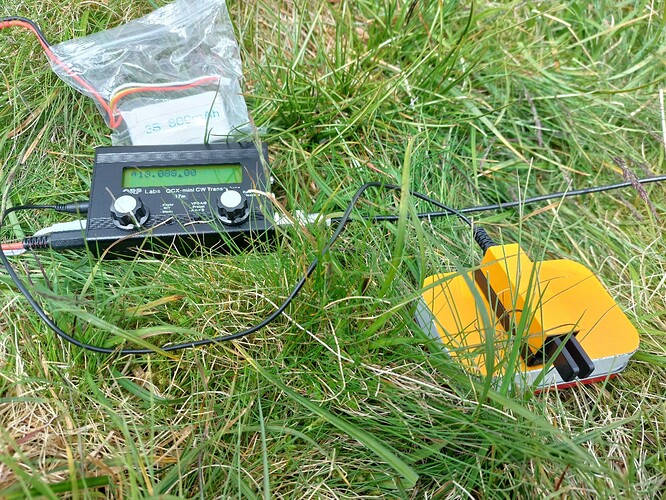 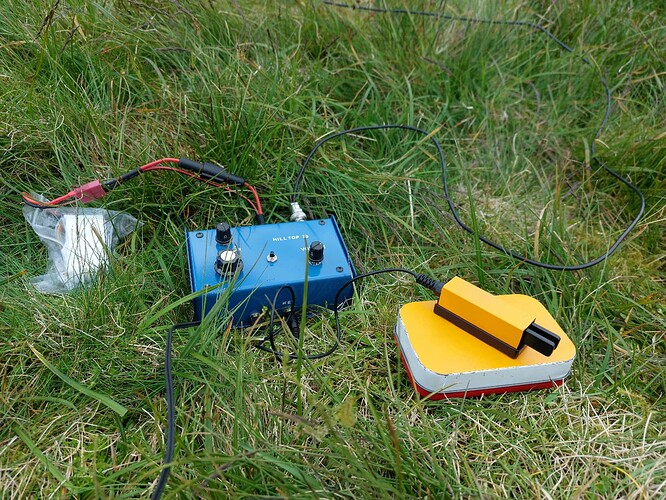 It was so nice to be back out on the hill.

Oh, I almost forgot the picture for Mark @M0NOM

A Grand Day Out! I’m really pleased to hear

how the new toroid worked on the QCX. I had the same deafness issue when I used my 17m version on G/DC-001.

What is the spec of the yellow toroid T-? or whatever it is?

Thank you Colin for the interesting report and our cw qso. I’m still amazed at how far and reliably communication can be made with such a small piece of equipment.

I’m still amazed at how far and reliably communication can be made with such a small piece of equipment.

I have often written on this reflector about what I call ‘the magic of radio’.

I once worked Barry, N1EU when using this RockMite 20 powered by a 9V block battery , power output was less than 100mW - 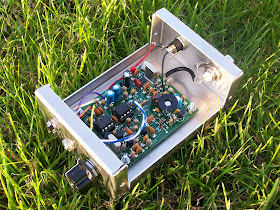 It wasn’t just a one off - I worked Barry several times using a RockMite.

Looking forward to our next QSO, 73.

Thank you, I’ve just ordered some from ebay.

toroids.info (T50-6) is a good resource to find out the specs and also calculate the number of windings you’ll need.

and also calculate the number of windings you’ll need.

Now you are getting technical! I was going to do the same number of turns as the original. Should it be different?

Yes, the number of turns is different, the yellow mix toroid has less inductance per turn, so you’ll need more turns to have the same inductance. The large winding is in parallel with the trimmer to make a resonant circuit for the band of interest.

Thank you, from your photo above it looks like 25 turns plus 3 * 5 on the others.

Ingleborough mountain looks over me every day as I potter around my local area. One of the reasons I was looking forward to moving to the edge of the Yorkshire Dales was to have my favourite mountain in my back yard.

During a few nice summer evenings, I would wish that I was on the top of Ingleborough, so last year, I made my wish a reality and summited the mountain during an evening in June. Of course I took a radio too and I had a blast, working west coast USA, Japan, Brazil etc.

Now that summer is finally here once again, I have been thinking for a while that I should do another evening activation of Ingleborough. Quite by coincidence, which I didn’t realise until I just looked it up, I chose the same date as last year - 18th June! Spooky. I had thought about going the day before, but the weather forecast was a bit better for the next day.

I set off from home a little later than I had hoped as I had been waiting for my lipos to charge. The walk took me about 1¼ hours from near the Hill Inn, near Chapel-le-dale. I arrived at the summit at 2000 (1900 utc) and took the obligatory summit selfie… 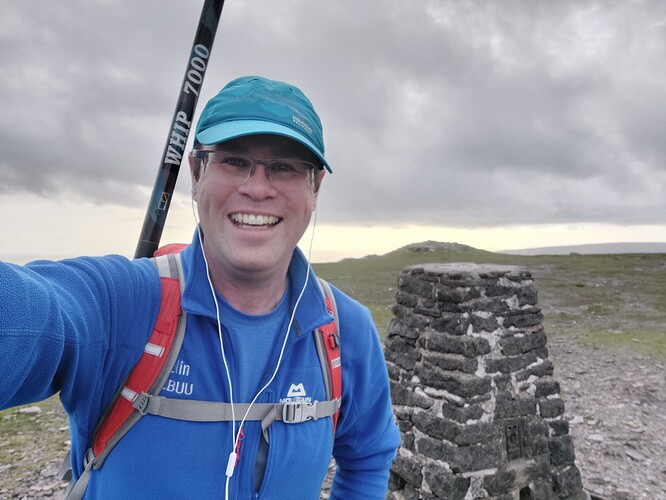 I was just walking away from the trig point when a party of walkers started shouting at me, so when they caught up with me they explained that they were lost and needed to get back to the Hill Inn, they’d been doing the Yorkshire Three Peaks and this had been their final peak. I pointed them in the right direction and explained the route to them, which was said back to me, so hopefully they made it off OK! A conversation inevitably happened about my fishing pole, so I described SOTA and that I was hoping to contact some stations in North America.

I was on air a little later than I envisaged (see paragraph above!) but I don’t think I missed anything! I started on 17m with my QCX and amp. I worked 5 stations in about 40 minutes! I’d planned to stay on 17m until 2100 (2000utc), so once I’d finished with Mario, DJ2MX at 2003utc, I had a bit of a break, eating some snacks and having some coffee from my flask - it’s not often that I haul a flask to the top of a mountain! I did have one transatlantic QSO in my log though, KB1RZ in New Hampshire. 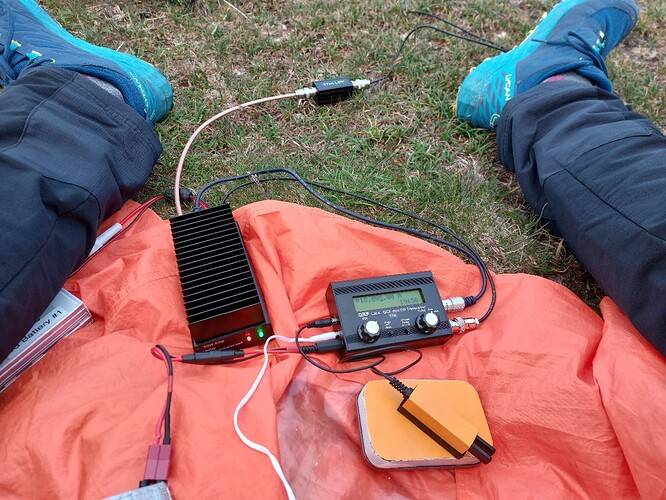 I connected up the QCX 20m station next and logged another 18 QSOs, although I worked Mario, DJ2MX and OH3GZ on both bands. I added another 4 transatlantic QSOs to my tally, but all the QSOs seemed rather hard won, my reports seemed to average around 339. Was great to work Chuck, AE4FZ again after quite a number of years. 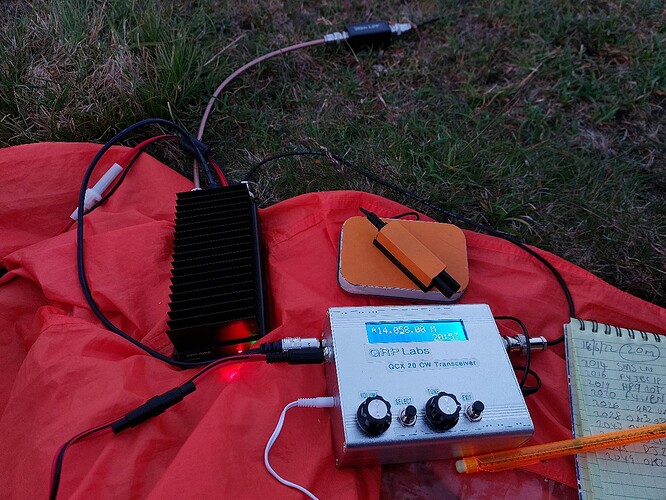 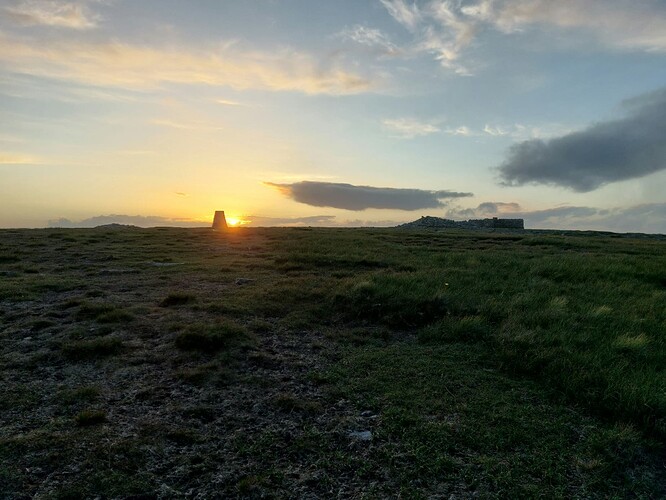 I had met my goals, but the radio propagation wasn’t anywhere near like what the widgets were promising.
I got to see the sun going down and got back safely, 5 transatlantic QSOs in the log, so it was definitely mission success!

Yes, it’s the same physical amplifier, however I did a LPF delete on it, so it’ll work on most HF bands.

Your 20m amplifier should be fairly useless on 17m by design, although some RF will get through, as the knee on the 20m filter isn’t a sharp drop, it’s more of a curve.

I built a set of standalone filters for each band, I just connect them inline, as needed.

Thanks for the QSO, Colin!