I’ve created a new topic so people can add their own personal plans.

I’ll start that off with a little bit of a curve ball - one of my Foundation License course buddies and now good friend Nigel M5TUE suggested some time ago that we should climb Pillar Rock and operate some sort of radio setup from the summit. We have made plans to do this on the Friday before the LD SOTA Weekend, Friday 19th. Nigel is an experience climber and will be training me up and I am now on a program to also reduce my weight (as opposed to the current beer diet which is doing the opposite!).

Clearly radio equipment selection will be a big factor based on weight and also antenna selection will be interesting given the relatively small size of the summit. I won’t be able to use my trusty SOTABeams quad-bander dipole for example! 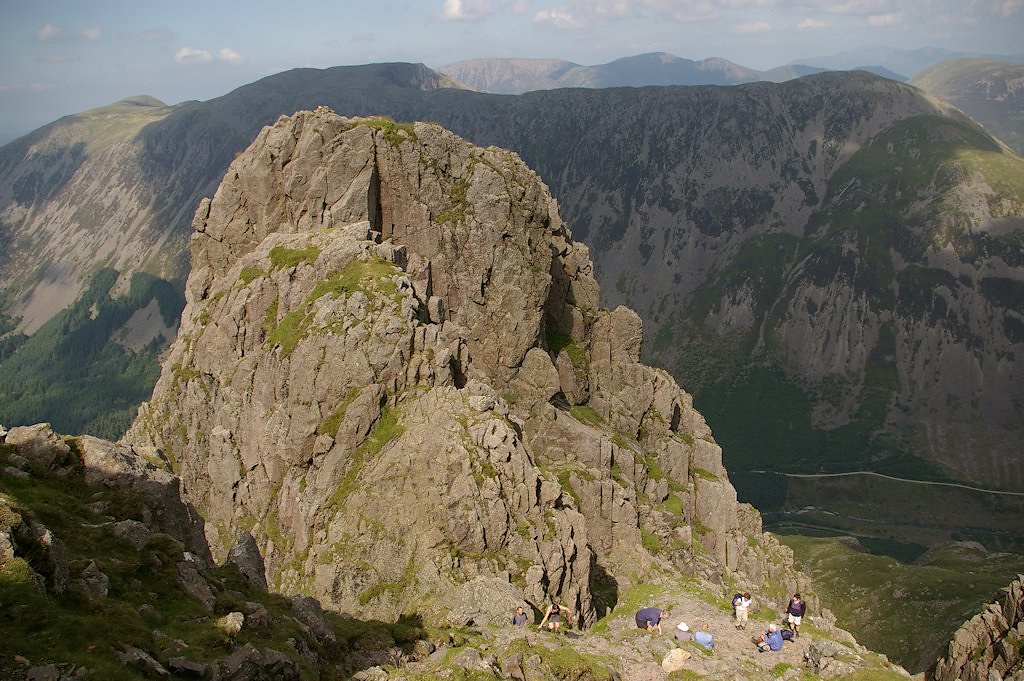 Pillar Rock is steeped in climbing history and was a very popular spot for climbers in years gone past, quoting from the wikipedia page:

Pillar Rock is a large rocky outcrop surrounded by cliffs on the northern side of Pillar, well below the summit. When seen from Ennerdale it looks like a tall and thin column, hence its name. In the early 19th century it became widely known as one of the wonders of the Lake District, chiefly due to its featuring in William Wordsworth’s poem The Brothers .[1]

Like some vast building made of many crags,
And in the midst is one particular rock
That rises like a column from the vale,

Whence by our Shepherds it is call’d, the Pillar.

The first recorded ascent of Pillar Rock was made in 1826 by John Atkinson of Croftfoot, Ennerdale. His route, known as the Old West Route, is still classed as a rock climb, albeit one graded Moderate, the second lowest grade on the British system.[5] It is the earliest recorded rock climb in the Lake District (not counting Coleridge’s inadvertent descent of Scafell in 1802); subsequent Lakeland climbers also concentrated on Pillar, and by 1872 four different climbing routes had been pioneered on the rock.[1] The easiest route to the top of Pillar Rock is now considered to be the Slab and Notch route, classed as a grade 3 scramble, whilst the classic route is the New West, classed as a Difficult rock climb. By 2007 over 90 climbs had been recorded, including 17 graded E1 or above.[6]

By 1913, George Mallory seconded by Alan Goodfellow, climbed Pillar Rock by what is now known as “Mallory’s Route” – currently graded Hard Very Severe 5a (American grading 5.9) - similar in difficulty to The Second Step on Mount Everest.

Pillar Rock has a topographic prominence of more than 15 metres, and thus qualifies for the list of “Nuttalls” compiled by John and Anne Nuttall in their book The Mountains of England and Wales (see also Hill lists in the British Isles).[7] It is the only summit on the list that cannot be reached without recourse to rock climbing.

When I said those dates “will do nicely”, I meant from a “joining in on the air” POV, rather than participating in the LD in person. I have gigs both nights, but both fairly local so I can set up on my local summits in the mornings at least and attempt some S2S.

Virtually all my summer weekends are (or will be) booked up with gigs, but most of them are not so local either. So this one at least allows me to participate from afar.

Tom - there is usually additional activity in the Lakes around the weekend, definitely there were more activations on the Friday before and Monday after so it would always be worth considering those days too if they fit in with your schedule.

Well Mark, I activate virtually every day, so quite probably!

I hope to be available next year and will probably activate qro multi band on G/LD-046 Lambrigg Fell.

Hmmm… whilst I can’t make the event evening activities, I can pop up a summit in the afternoon with a good path to Blackcombe and look at having 2,70,23 & 13cms QSOs.

Andy @G6PJZ had messaged me about the pub we meet at and accommodation recommendations. I run another event DEC Legacy in Windermere and asked the attendees if they could help, here is my response:

The pub is the Brookside Inn. If people want recommendations of accommodation I have had positive feedback for the following, but not personally stayed in any of them. They are all in Windermere in the area around the Brookside Inn.

HI Mark
I can also recommend the Rocklea Guest House, diagonally opposite from the Brookside Inn. We stayed there on the Last LD Weekend. It was superb, with car parking in the driveway if you are first in.

One drawback, a 3 night stay is necessary to get a booking. Often the case over summer weekends in the Lakes.

Hi Jimmy, I can’t comment on youth hostels as I’ve not stayed in any. The question was for somewhere within walking distance of the Brookside Inn. There is a YHA at Troutbeck Bridge which I think would be the closest, followed by Ambleside. Both a taxi back.

The suggestion of staying in a youth hostel would not go down well with the XYL
She would require somewhere local to the town and/or other facilities to keep herself occupied while I’m out doing SOTA.
We did stop at Glencree last year, which was nice, and just short walk from the Brookside pub and the main town centre.

One thing I’ve learnt about event organisation is that even pleasing the majority is difficult, let alone everyone!

I would encourage folk to take accommodation most suited to their needs for SOTA rather than necessarily basing it around Windermere for access to the pub.

I’ll probably be staying at Black Sails Hut on Thursday evening prior to the Pillar Rock attempt on Friday, not sure where I am staying Friday evening yet - may well stay North Lakes this year for a bit of variety, and be back in Windermere for Saturday night (all things going well!).

I won’t be able to use my trusty SOTABeams quad-bander dipole for example!

A mag loop might be worth considering. Happy to lend you one.

Thanks Richard. I did have an AlexLoop for a while. It was quick and easy to setup - 5 minutes up and down. I never did an activation with it however. For chasing I found it quite painful because you had to tune up each time, even when on the same band.

I should have had a try at activating with it, as that would be a more sensible scenario.

If you would like to borrow mine PM me. Happy to send it early so that you can get used to it.

I would encourage folk to take accommodation most suited to their needs for SOTA rather than necessarily basing it around Windermere for access to the pub.

I must admit that I do my best to avoid Windermere because of crowds, traffic jams, a rather twee tourist industry and matching elevated prices! As for accommodation, I have a very comfortable tent…

I did have an AlexLoop for a while

Mark, I also have an AlexLoop (that I never use) which you’re welcome to borrow if you don’t mind picking it up from my QTH.