Tuesday afternoon activations are back on, when my work schedule allows. After my rather good day out on Glas Maol GM/ES-012 last week, where I had an amazing activation on 2m, I decided to chance my arm on another 2m only one. I chose Kerloch because of it’s location near to Aberdeen and with a great southern outlook (RF path) down the east coast of Scotland to Edinburgh and beyond.

Hopefully this would get me 4 contacts.

Tuesday 25th January
On another thread, @MM0FMF Andy scoffed at my plan to hide the kx2 in the rucksack as a back up. Suitably shamed, I left it in the car, along with the 7m mast. However, I did take the short VHF mast, as there was a chilly breeze blowing and I didn’t fancy hand held yagi on top.

The ascent was easier than expected. 3km of gently ascending Land Rover track was followed by a further 1.5km through plantation and up open moorland to the summit. 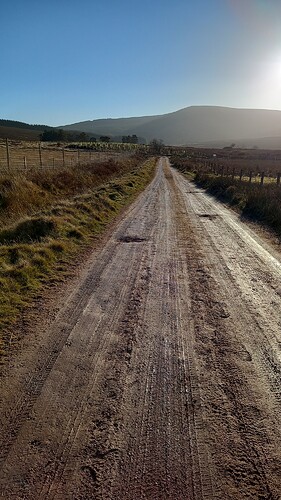 I was expecting the plantation section to be a nightmare of windblown trees. I normally carry mast in my hand up here, as there are a few blockages here and there. It looked like storm Arwen had caused some damage, however this, along with most of the existing windblown had been cleared, with the exception of the very first one on the track! 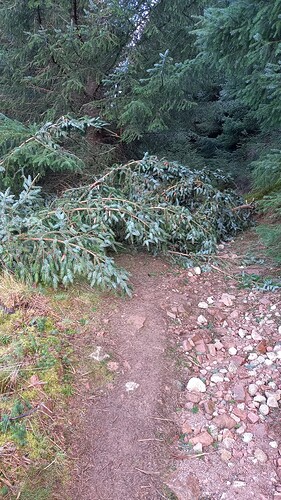 The path degenerates further up and can be a struggle if there’s snow or ice, however I was soon out on the moor and reached the summit in a time of 55 minutes. 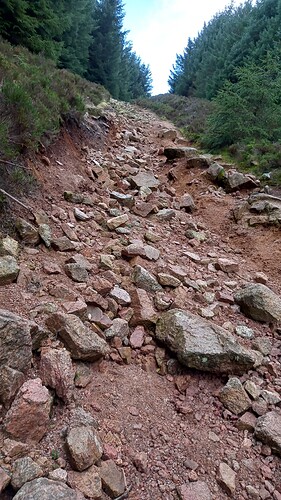 Activation of GM/ES-059
I’d done some pre-work to increase my chances. A combination of twitter, email, tagging on here.

First up was local friend Simon @GM4JXP. Message sent and I worked him on the handheld with just the whip. One down.

Next I set up the mast and yagi, plugged in the Yaesu FT-3d, beamed north and spotted. I was specifically looking for Peter 2M0SQL, the Satellite King (twitter) and @GM4TOE Barry, who I tagged on here. It was a difficult path to Elgin, so no Peter, however Barry came on for a short QSO. Two down. 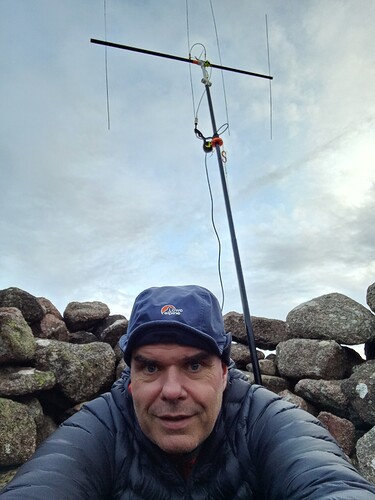 Beaming south and re-spotting, Gavin @GM0GAV was quick to respond from near Dundee. Then Ken @GM0AXY from Edinburgh kindly answered my call and we had a quick chat. My guess is they read on here first and saw my spot. Four down. Success! In only 16 minutes too. 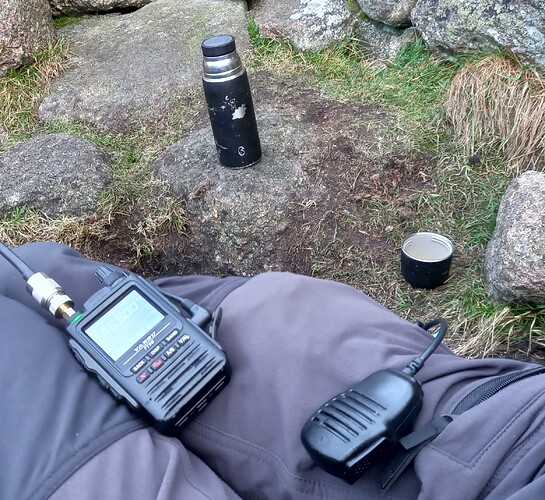 Well for the next 40 minutes, I called away and made just one more contact. Keith G4ITR and I had been in contact via email and he was looking out for me. Despite QSB, we completed a contact over a few minutes. A nice finish, Newcastle 200km.

I beamed east towards Aberdeen for 10 minutes with no response. It’s just 20km to the east. I could have tried to drum up some traffic on the local repeater, but didn’t bother. 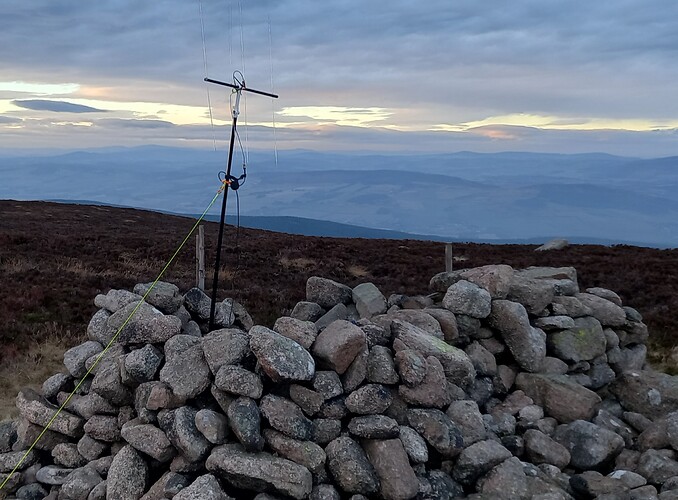 I’d been QRP for an hour and called it a day, wanting to to be down before dark.

Leaving the summit at 1600, I was back at the Landie at 1650. I happened to turn around on the way down and caught the briefest of sunsets over Kerloch. It only lasted a moment before it greyed out. 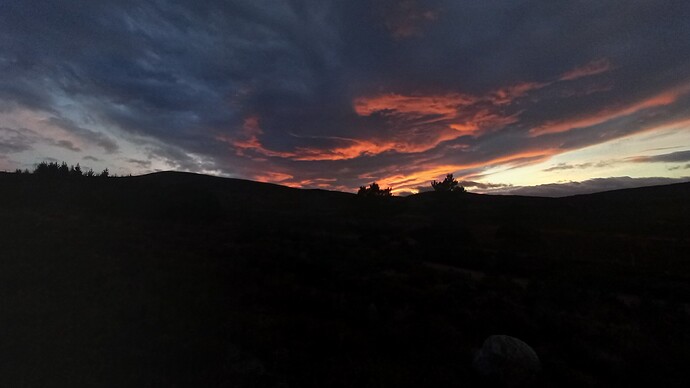 Summary
I like Kerloch. It’s a great wee hill, has extensive views and a pretty good take off in all directions. I’ve activated it twice now on VHF. Next time will be HF!

I returned home to an email from Craig, the keeper of the MB7UEL APRS igate at North Berwick, 100km further south. He’d been picking up packets from the ft-3d when I’d placed it on the trig point, with just the rubber duck on. So at least I know there was some propogation.

I made this video after last summers Kerloch hike. My opinion hasn’t changed. Is there anyone out there in NE Scotland? 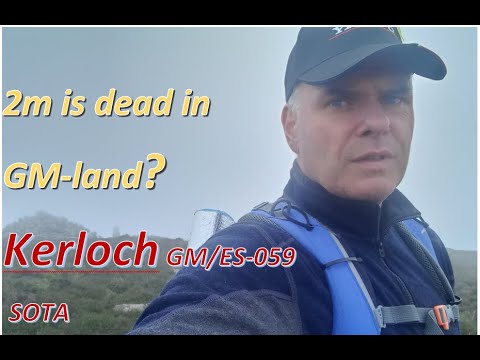 Thanks Chasers for helping me out with this one.

Hi Fraser, thanks for your acivation report with photos. Well done

Scoffed? No. But to paraphrase Kipling, you’re a braver man than I Gunga Din being 2m FM only in that part of the world. Much braver! Anyway, you succeeded even if it took a bit of pre-activtion work.

It’s quite amazing how moving 100miles North of Tinto and the number of chasers drops off a cliff. Tinto, of course, over looks Glasgow and Edinburgh and their orbital towns. It also has a reasonable path down to NW England. An average Tinto 2.5W 2m FM + J-pole should net about 15 chases without too much angst. Population density doesn’t help nor do the Cairngorms blocking off most off the SW to NW path in Kerloch’s case.

… most of the existing windblown had been cleared, with the exception of the very first one on the track!

Obviously a Celtic ploy to keep we Sassenachs away.

Say 4.5 watts at the 7dB antenna, so around 22 watts ERP. Excellent stuff. Pity I wasn’t up at the /A QTH. I remember working Barry from the local high spot up there with 25 watts and a dipole and signals were quite reasonable. Anyway, what’s this… Robert GM4GUF didn’t make your log?.. when I’m activating in Scotland he seems to be omni-present!

Many thanks for another great report and photos… another summit for me to consider.

Sorry, not scoffed. You did what ever that is.

Anyway, all good fun. Next time up Kerloch I’ll try EME, or does that count as using a repeater?

EME, or does that count as using a repeater?

Satellite contacts are allowed for SOTA.

Etienne K7ATN is your man. He did some QRP 70cms SOTA EME the other week. For me, QRP EME on 70 is on the retirement projects list.

You’ve logged your contacts as SSB. Weren’t they FM?

That’s down to my inability to use VK Port-a-log correctly. Thanks for spotting it.
No excuse really, I wasn’t exactly grappling with a pileup!

I like your video of your previous struggles on 2m fm. It looks as if I wouldn’t have much much success with my 5w and 2m/70cm dipole!! I have tried a beam but without much success (it usually droops or gets blown round by the wind). We haven’t been to GM/ES and have plenty more to attempt before we might think of going that far. Some of the GM/SS summits have been enough of a challenge. When on the Outer Hebrides in 2018 I reckoned that just one 2m contact was success but did sometimes manage to get up to 4 2m contacts by finding an amateur on N Uist also in Stornoway, Mallaig and Skye but very hard work. All being well it will be around Oban and then Mull in June this year if the plans don’t have to be cancelled yet again. Here’s hoping.

Thanks for your account and the super sunset. Glad we had a brief s2s when we were somewhere N of Dumfries last September.
73 Viki M6BWA

Yes, that was a highlight. 5w into handheld radio and handheld yagi at my end. I managed to qualify both GM/WS-023 and GM/WS-021 on 2m. It was LD weekend and there were plenty of folk around. I didn’t work anyone in LD though!

It’s around 9 mins into this video.
https://youtu.be/VEh5bP4THhs

Oban and then Mull in June this year

Excellent. We’re on Mull in October for the rally, then staying for a week. Hopefully take some summits in. Been up Ben More GM/SI-003 twice, but never had a radio with me…